Meall nan Eagan - a quickie down the A9

Meall nan Eagan - a quickie down the A9


The busiest time of the year is coming and our wallets are getting thin... Due to tight schedule during the week, Saturday/Sunday are the only days when we can hunt for Christmas gifts, but I wanted to fit in a hill walk as well, if only a short one. Having checked the forecast, Kevin told me to "find a quickie down the A9"

Immediately, I thought about Meall nan Eagan. It's only a Graham but a good one, usually climbed as a combo with The Fara, but it can also be tackled on its own via a very nice glen.
We have already ticked off miss Fara, walked the whole length of the ridge and would do it again with pleasure, as it's one of the best ridgewalks in the eastern Highlands. This time, we concentrated on the Graham only. As a half-day's outing, this route is perfect for short winter days. If only there was snow on the summit... Aaah, one can't have everything!

Track_MEALL NAN EAGAN 01-12-13.gpx Open full screen  NB: Walkhighlands is not responsible for the accuracy of gpx files in users posts
Parking may be an issue along A889, but as it was Sunday, we parked by the entrance to the quarry. There is space here for 2-3 cars: 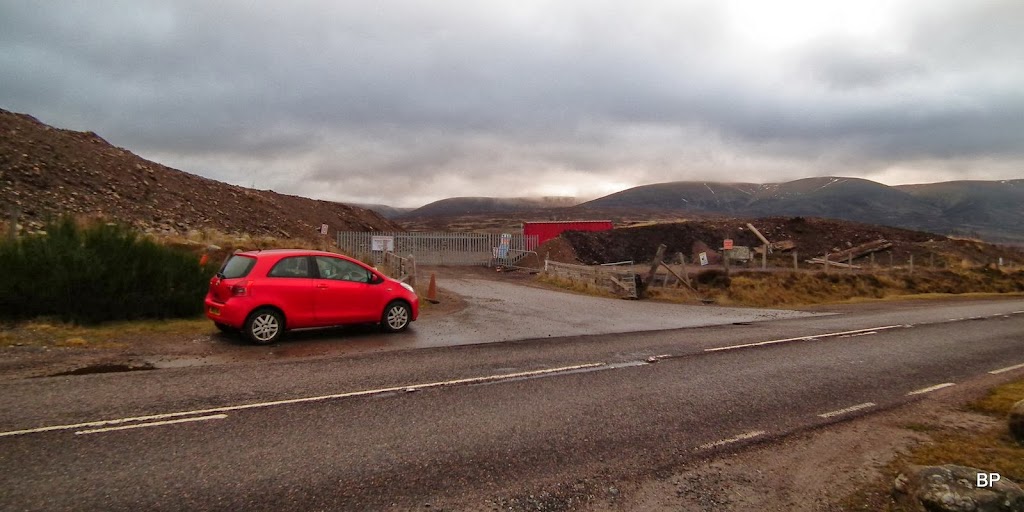 Basically next to the quarry, a private road leads down to Allt an't Sluic lodge: 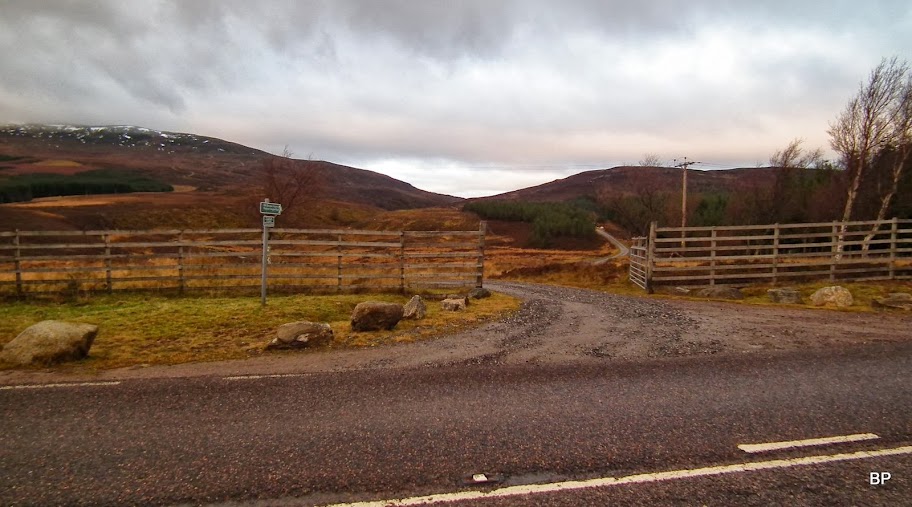 Our target hill cannot be seen from here, but walking was easy on the track: 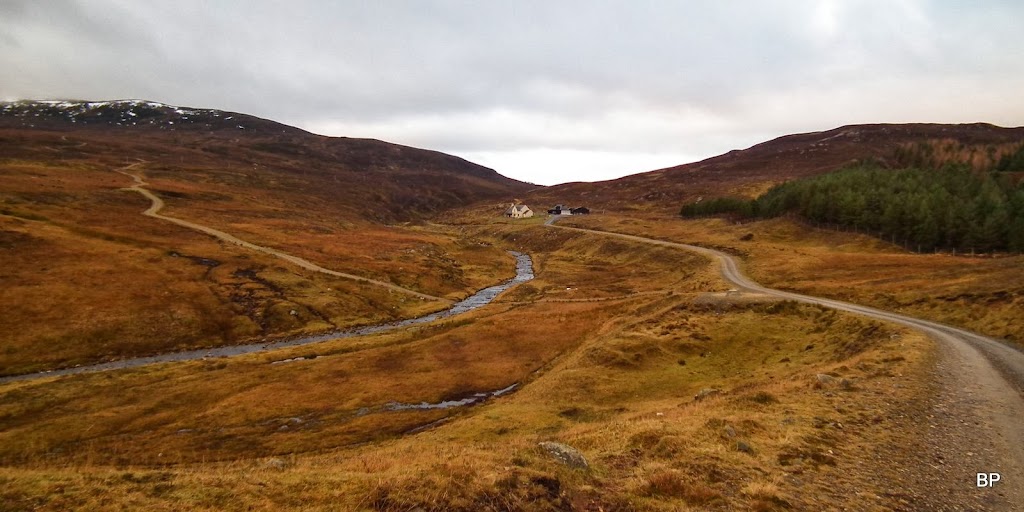 The track splits before the lodge and we took the left branch, down along the river. Just past the lodge, it ends abruptly, but the other track is only a few metres above. We turned right and climbed quickly up the heathery slope to reach the upper track. Looking behind, I noticed showers passing over Drummochter Munros:

The track climbs slightly and then it drops down again into the glen. One option would be to follow this to the bottom of the hill (seen now in the distance) but we left this for the return route. Instead, we picked a higher path alongside the slopes: 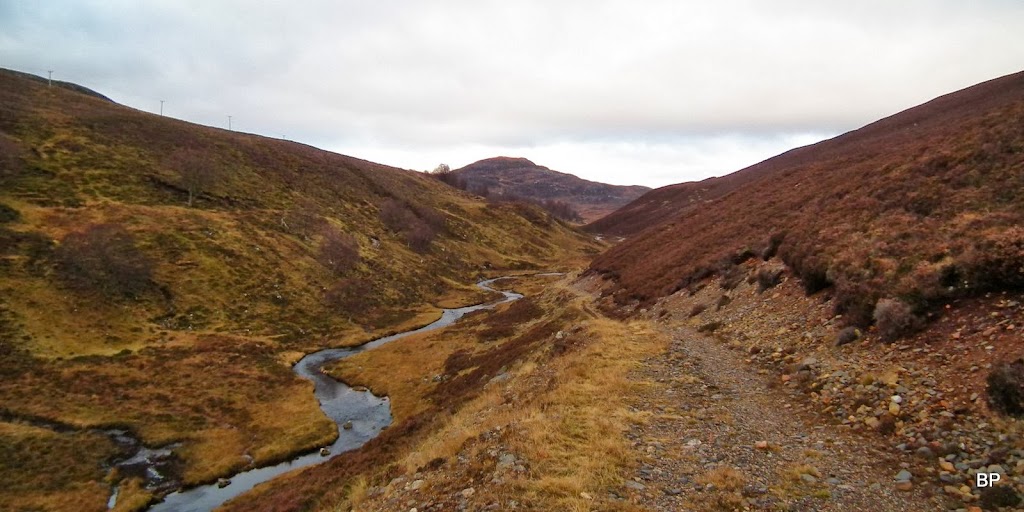 This higher path is obvious for about 1km, as it meanders between patches of heather. Good views down to the glen: 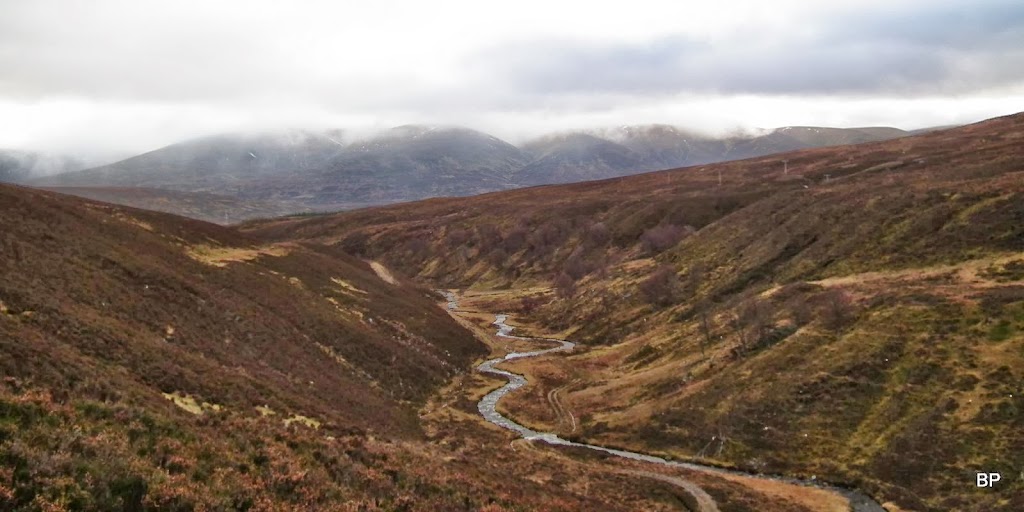 Closer to the Graham, the path peters out, but it was easy enough to cross the heathery moorland towards our hill: 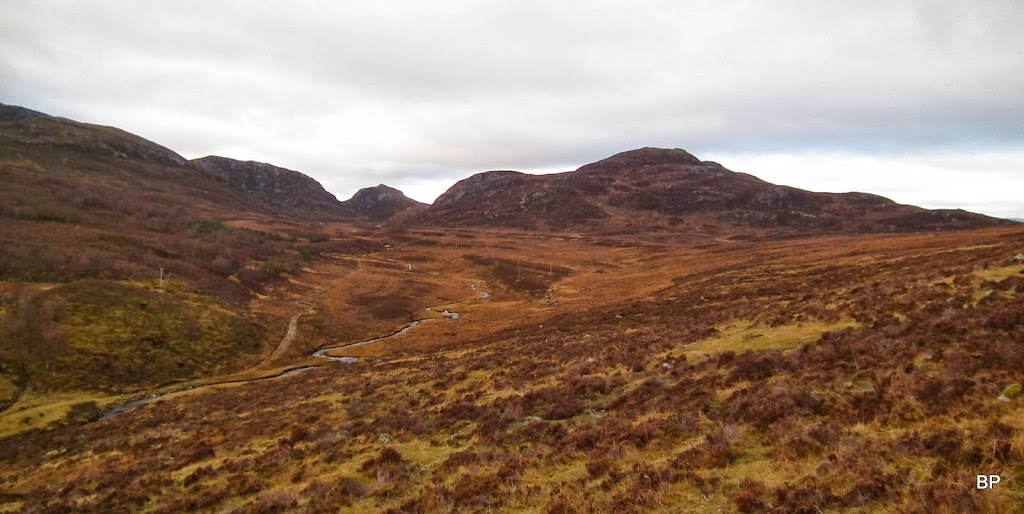 The "easy enough" soon turned into "tuft-hopping". The ground here is quite boggy, but no big peat hags to negotiate, so as long as you have good waterproof boots, no problem

Weather was improving now and we even experienced a few rays of sunshine... Views opening up as well, but suddenly... All the pleasure was spoiled by the appearance of the big monsters 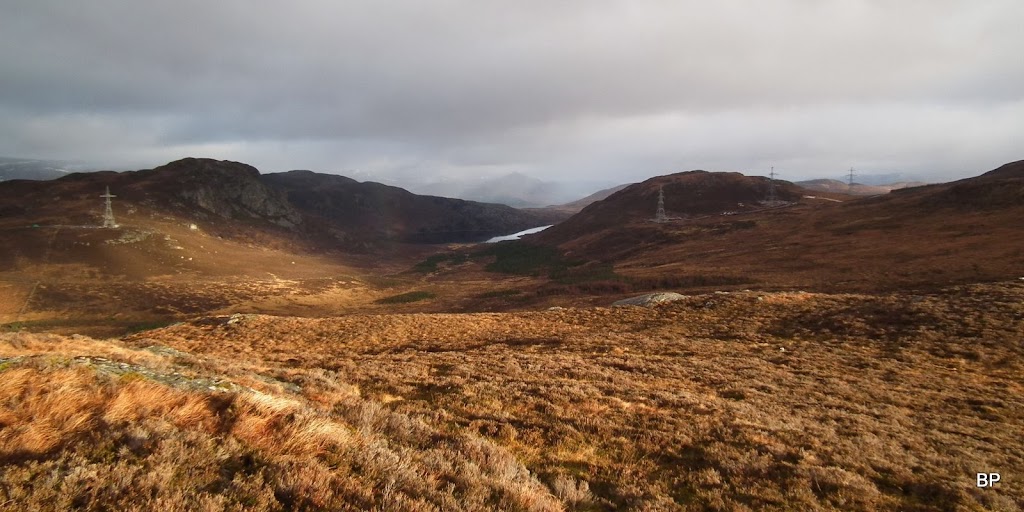 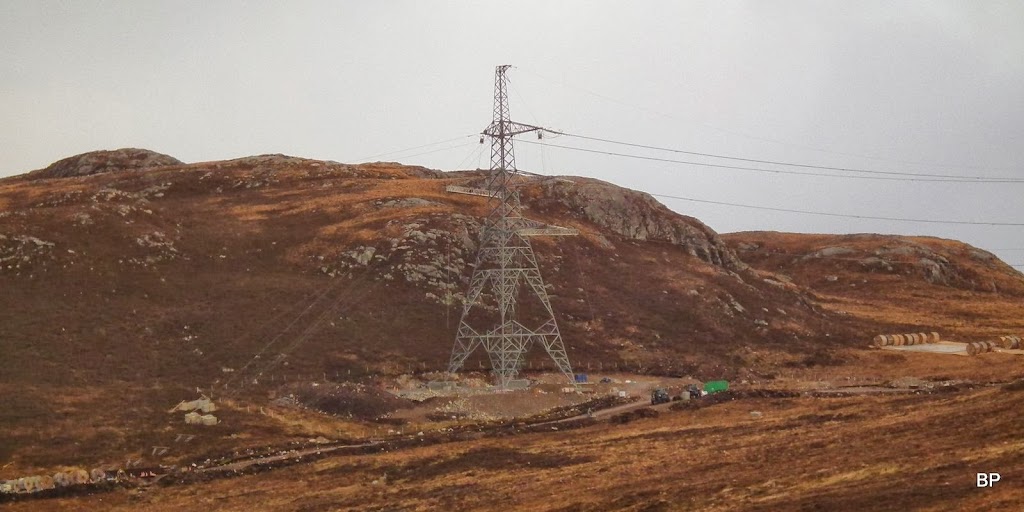 Strangely, it's not the pylons themselves that I find disturbing - they may be bigger than other powerlines but I'm sort-of used to seeing such shapes around. It's the access roads and all the mess and fuss around them that I don't like. Especially when the tracks are brutally bulldozed into the virgin-wild landscape

And it will take time for such scars to mend...
Back to our route: as soon as we came across old fence posts, navigation became even easier 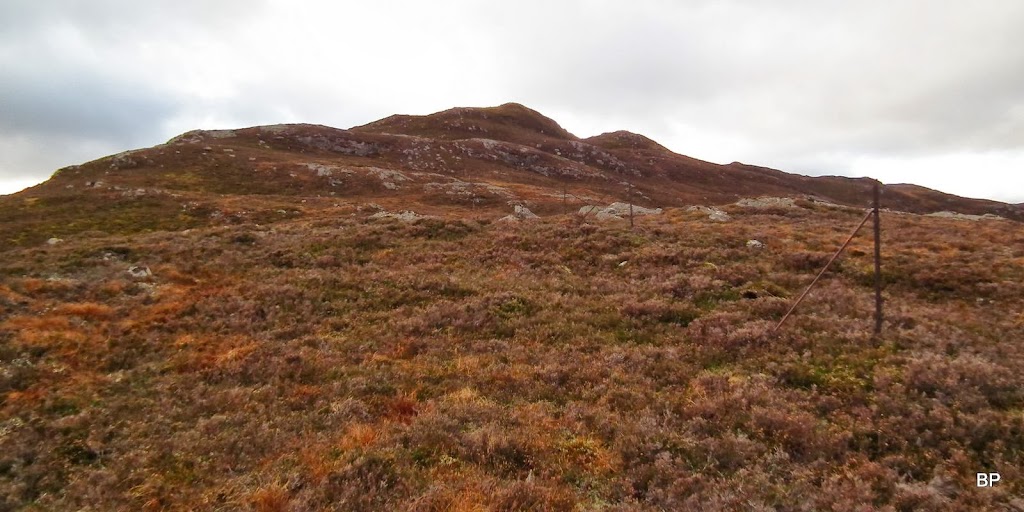 The cloud was slowly lifting and though we never counted on full panoramas, now my hopes were growing for some nice views: 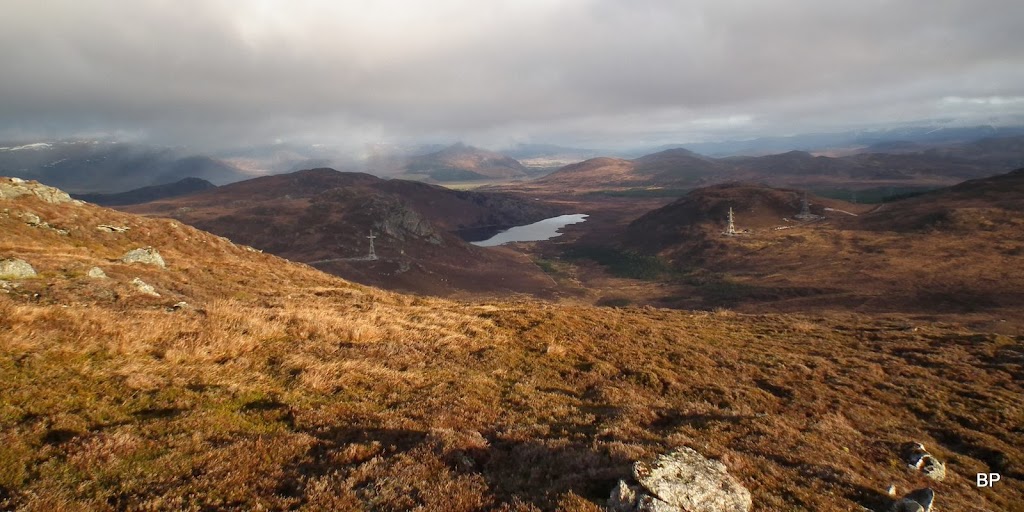 About 200m of steep-ish climb took us to the summit area of Meall nan Eagan, with more good views emerging. The sun was out now, not a bad day after all: 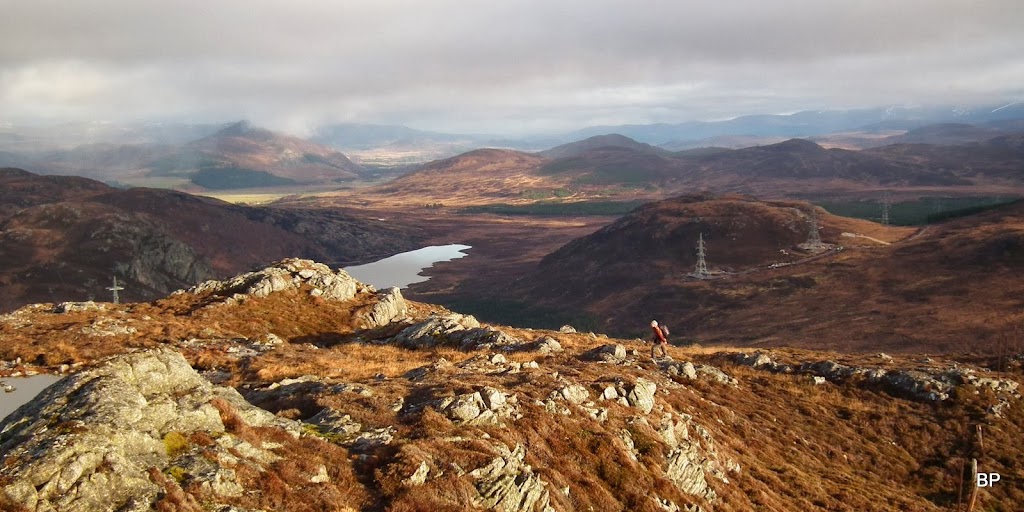 The summit is marked by one of the old fence posts: 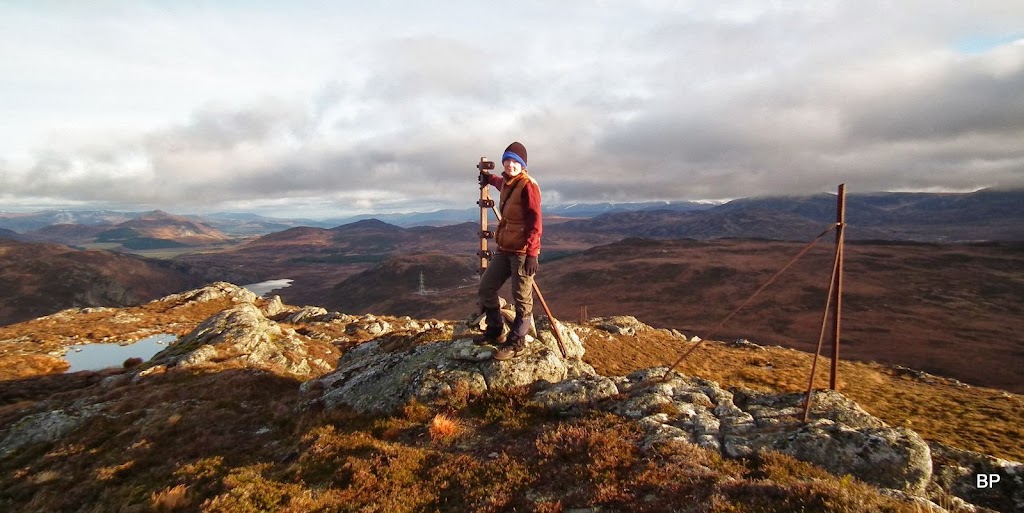 Weather has improved and as there wasn't much wind, we decided to have a longer break now. Not that we were too tired, but who knows when we'll get another day like that...
A few panoramas - enjoy: 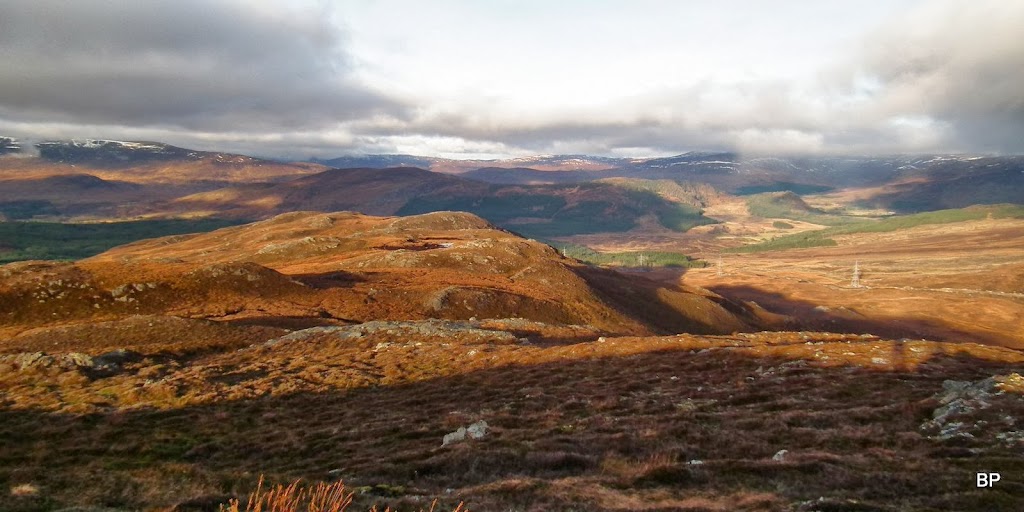 Beinn Eilde and Geal Charn behind: 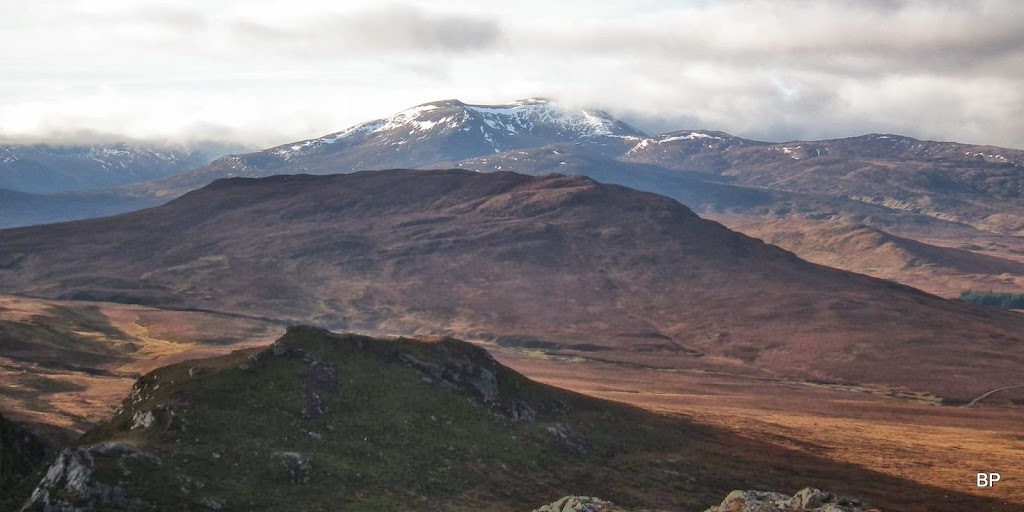 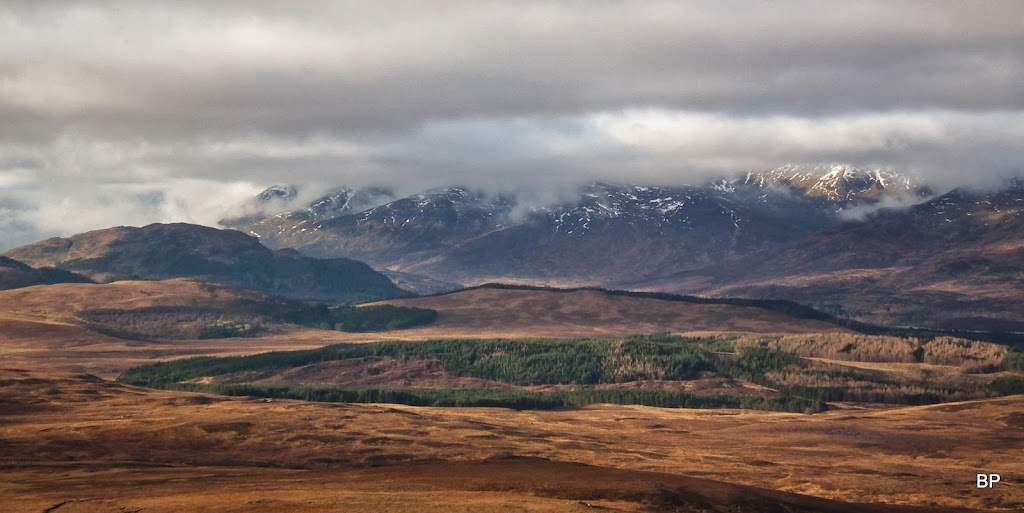 Zoom to the mountains in the south:

We sat just below the summit, drinking tea and marvelling at the views. Shame that the sun was directly behind the Fara, so we struggled to take any good photos of the Dircs: 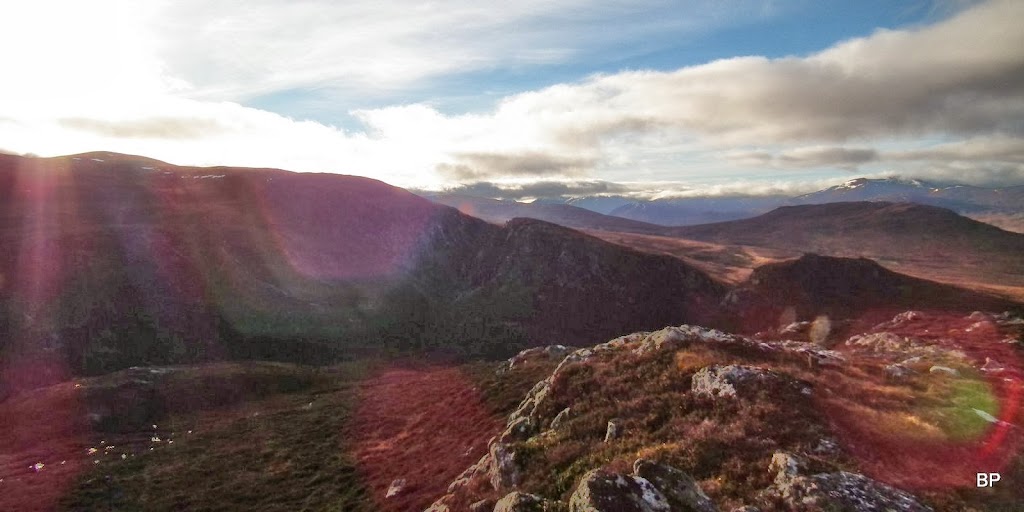 The summit area may be used as a playground for cats 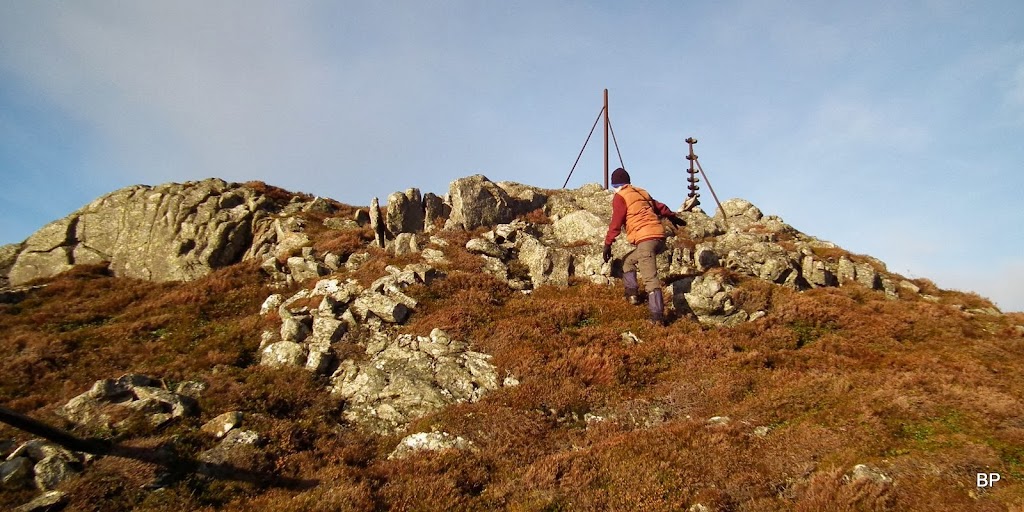 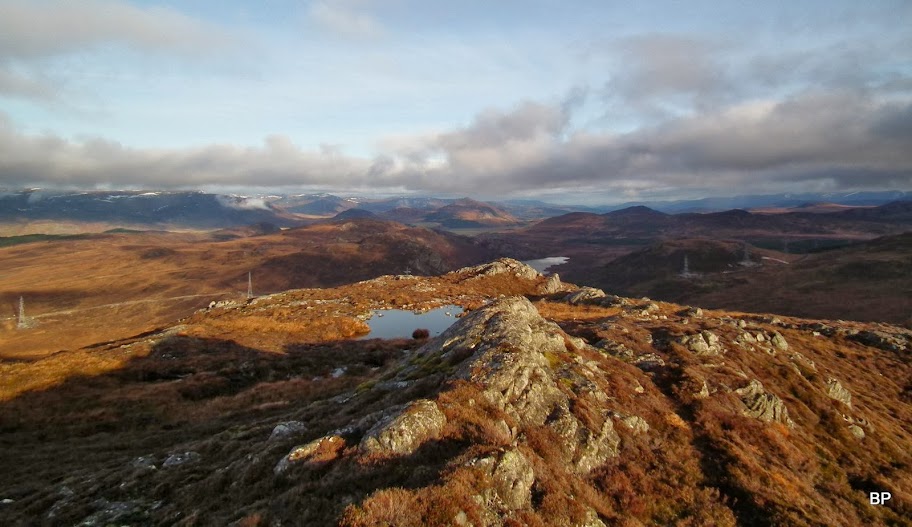 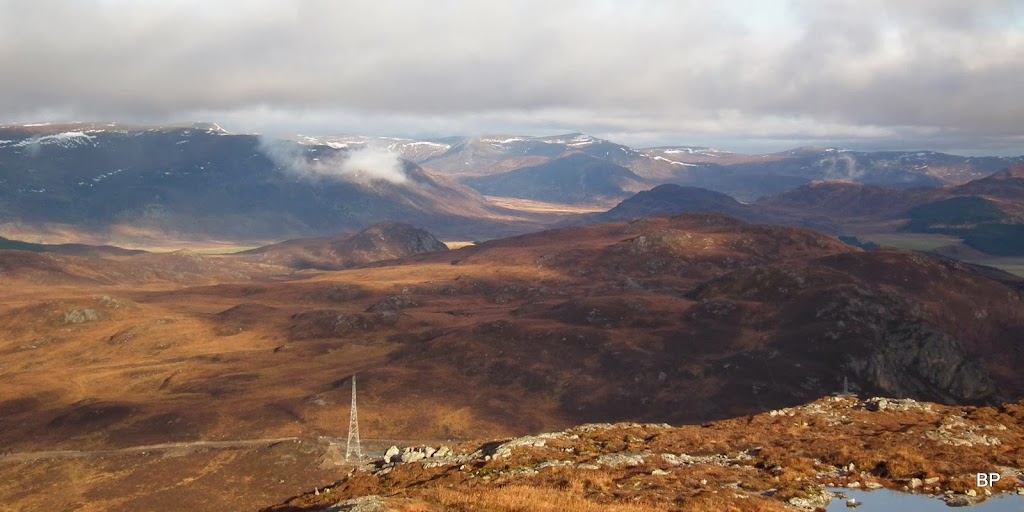 Creag Dubh looks like a cone from this angle, whereas it is indeed a long ridge. Another good Graham: 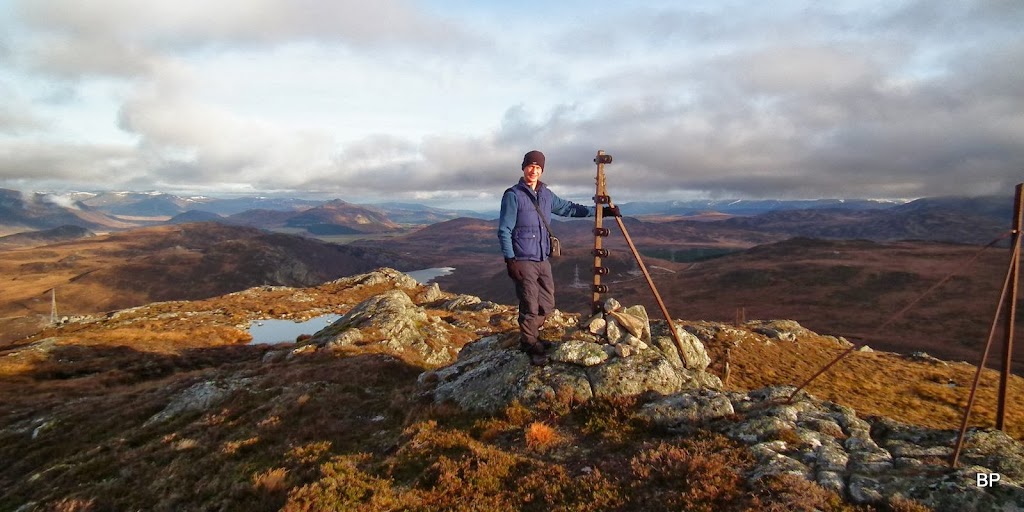 About half an hour later, we eventually left the summit. We decided to take a direct route down the eastern slopes into the glen: 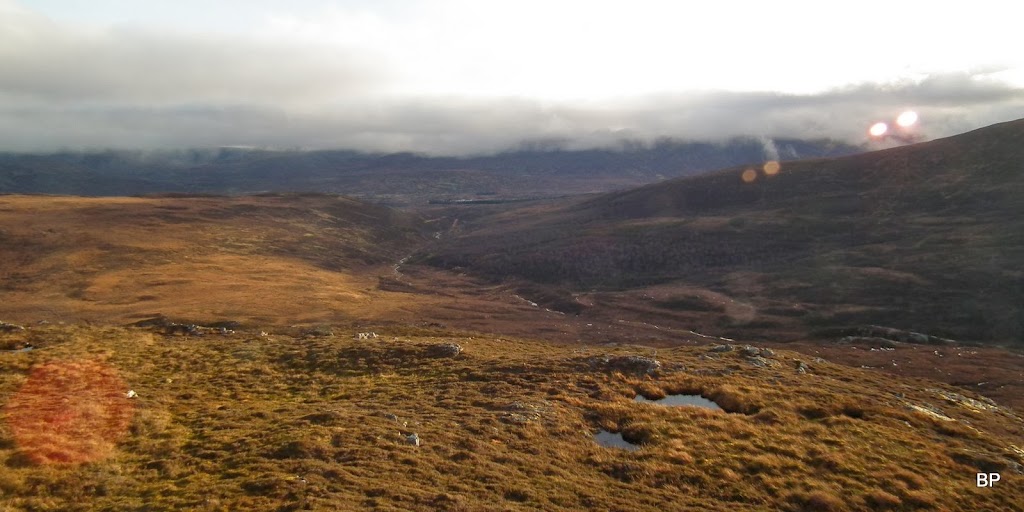 It turned out to be the drier option and though a bit slippery in places, a quick way off the mountain. Soon we were down in the glen, where we picked up a faint VT track, which soon joined the main track along the river: 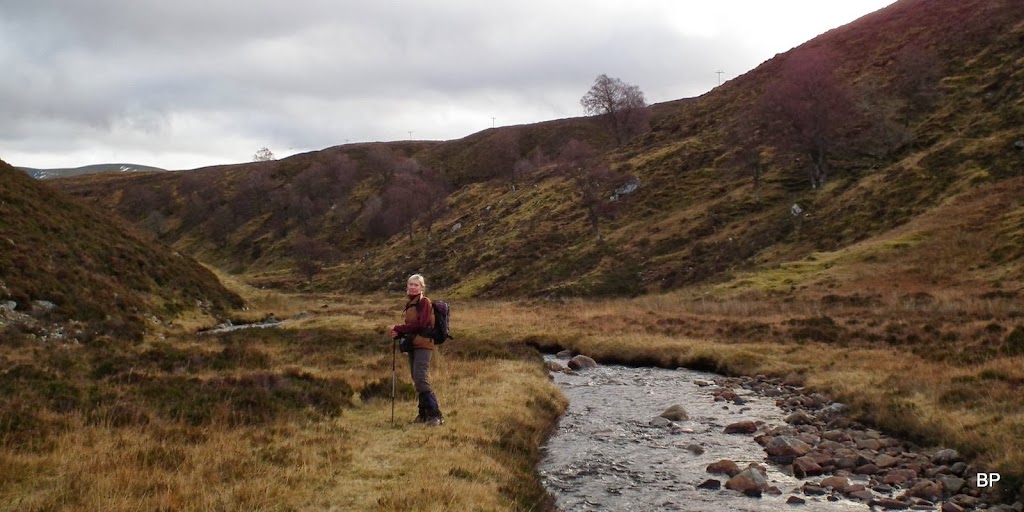 Looking back to Meall nan Eagan: 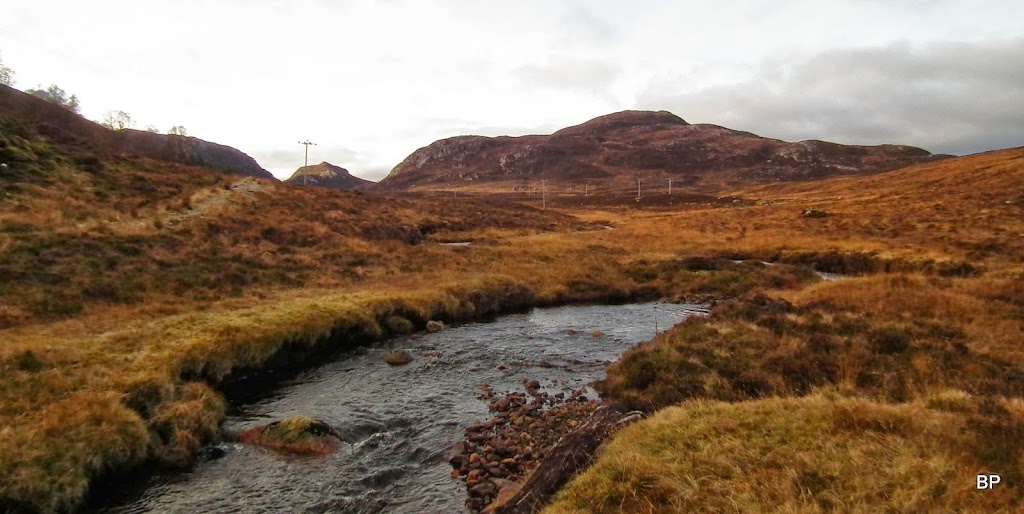 3.5 hours after we left, we were back in the car and as it was only half past one, we had enough time to pop in to Ruthven Barracks on the way back to Inverness. We have been there before and more than once, but during the last visit in 2012, the buildings were covered in scaffolding and some consolidation works were carried on. Now, it's all finished and the barracks are free to lurk inside again

Not the best light for pictures, but this ruin always impresses:

This building was closed for the public, now it's open again. Shame there is no platform to climb onto the higher levels, it would be a good viewpoint: 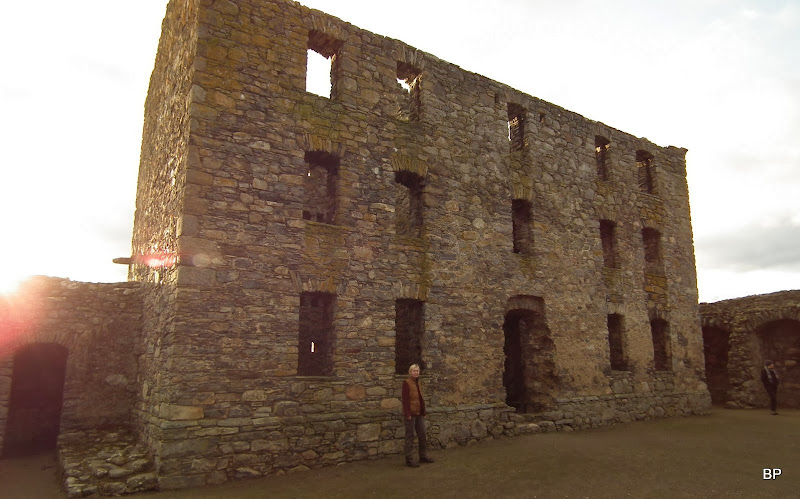 The well and the main building: 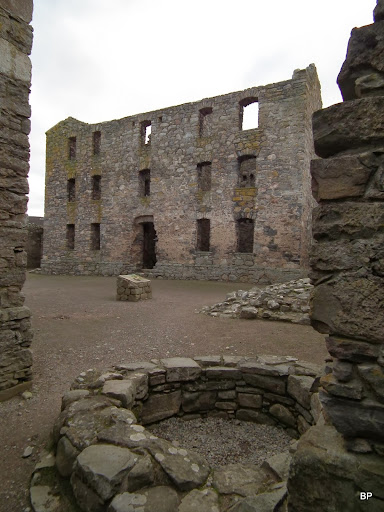 So no epics last weekend, but a good day out. Meow!

With gale force winds predicted for the upcoming weekend we may not see the hills for the next couple of weeks... But I wouldn't mind some snow on the lower ground - to make sure we have white Christmas

Very timely post BP, this ones on the Radar for this winter. Some nice photographs as usual, pity about all the scars on the hillside though, I'm a bit like you it's all the access roads and the damage to the surrounding vegetation that will take such a long time to repair if ever that I don't like. Hope you dropped by the distillery when you were in Dalwhinnie

Always wondered where that track went - now I know!

Nice hill. Shame about the visual blot on the landscape nearby!