g44.gpx Open full screen  NB: Walkhighlands is not responsible for the accuracy of gpx files in users posts
From one of the windows of the cottage where I was staying in Onich I could see the north ridge of Sgorr Dhearg every day. The ENE ridge intrigued and the whole horseshoe also looked grand so I had to climb it on this visit. I made an early start to park up in Ballachulish. A walk up the road, over the bridge and left past the school. The ridge looks good and the face dramatic. ascent route, ridge on the left

The path that leads through to Glen Creran began, I followed this to the 2nd gate and the fence on the right. Just past this I turned right onto the grass toward the ridge. After a short distance there is a path through the bracken and heather, not visible from below and not on the map either. This would certainly ease the way in summer. The climb becomes fairly steep but the path helps, in places though it is also a watercourse, not a problem in the dry conditions today but still requiring some mild scrambling in places. The views back to Ballachulish and Loch Leven improve as you gain height, the still conditions gave great reflections and colours. The incline decreases for a section and the rockier top part of the ridge is now easier to see. Steeper again now, the first sections were straightforward but iced in places so care was needed. I stopped for a snack and to take in the view, then started up the first of the higher rock outcrops that are situated on the crest of the ridge. About 20 ft up I just didn’t feel right, the sack didn’t feel stable and the rocks were increasingly ice covered. So I decided to descend and make my way around to the left. There was a narrow ledge with a steep slope below, this led to a scree gully. Snow at the side of the gully helped the ascent here then I made my way over an interesting rocky route back toward the crest and the summit of Sgorr Bhan. This was a good alternate but I will come back again to climb this scrambling ridge in full, it is a marvellous way to start this round. At this first top you can now see the ridge round to Sgorr Dhearg, this a beautiful corniced curve, magnificent in the weather conditions. Just stunning and worth every effort to get here. More great views to the north although the cloud was a bit thicker that way. you can't beat this!

First there is a descent then you’re on the ascending ridge, being careful to stay back from the cornice. This gave a brilliant climb over a few bumps and dips, admiring the cornice sculpture in places. Suddenly lower and thicker cloud came in from the north and I was in mist as I reached the summit of Sgorr Dhearg, just after this look down to Loch Leven. just below the cloud

I carried straight on from the summit and was soon below the 900m cloud base on the descent to the bealach before the next Munro. descent to the bealach

A great roar and a Tornado flew in front of and just below me, between the Munros. I zoomed down to the bealach through the soft snow, here I had a long lunch break and looked at the possible routes onwards. I decided to go south from the bealach and along the Glen Creran path for my walk out so Sgorr Dhonuill was to be an up and back jaunt. Just for once I was able to go without the sack, I grabbed a couple of choc bars and hooked the sack to an old fencepost. Starting the initial climb I looked back to see 3 walkers descending to the bealach. The ridge increasingly narrows and gets steeper, rockier and scrambly toward the top, very enjoyable. A pity it was in mist after the earlier weather. The best part comes last, a narrow section with drops either side, not very long but added spice to the ascent. After this you’re at the small cairn. Another unexpectedly interesting climb. I stayed for a while hoping the mist would clear but it didn’t. Then I heard voices so headed back to photograph the walkers as they came across the last narrow section. I could just see them about 100ft below, they were heading back down. I called out and they told me the narrow section had put them off getting to the summit. I headed down to join them and we had a chat as we descended. I went on ahead since they were struggling a bit with crampons on the rocks, this does take a bit of getting used to. Back at the bealach we had another chat then they headed off for a descent to the north. 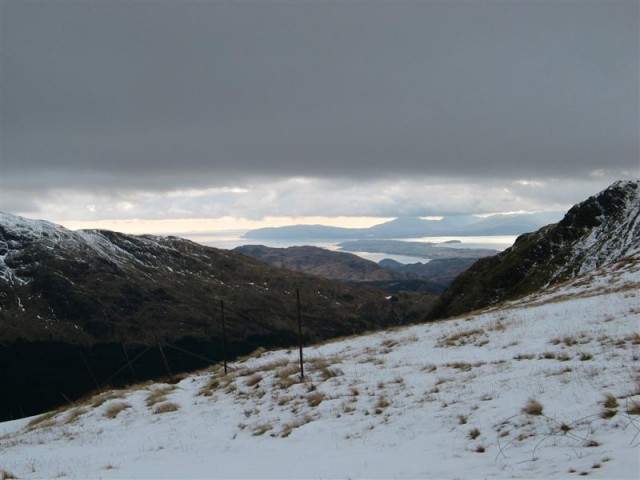 to the west from the bealach

Route descriptions all point to the difficulties caused by the forestry around the mountain, to the south though I’d seen that a large section had been felled and that there was a way through to a forest track and the path back to the start. I headed down keeping just to the left of the old fence and was soon out of the snow so crampons off. This was quite steep but enjoyable, finding wee gullies in places to avoid rock outcrops. Now over the fence into the felled section, the descent through this was made fairly easy by keeping to banks above small streams and helped by sheep tracks. devastated felled area, but a route through

Finally I walked down a very rough track of branches flattened by the felling machinery and reached the forest track. A brief stop for snacks then onwards. quick stop and the way ahead

A short way on the track then onto the path through the forest, which is signposted. This is boggy in places but a pleasant walk in the trees. The forest soon ends and the path following is a decent walk and probably not greatly used. I was soon back to the lights of Ballachulish in the dusk and to where my walk had began, to end another cracking day. When I did those with Richard, I hated Sgurr Dhomnuill 'cos I found the final clamber up the boulderfield (after the flat narrow ridge which I found okay) and the clamber up the 'bad side' onto the summit awful... he hated the other Munro as he found it boring but I thought it was a beaut! Shows how we all vary! I'll be interested to see your photos of the scrambly ridge up in summer as I've been looking at that and wondering what it was like...

Great photos and report - I love that curve up to the first Munro - one of the best looking views in the Munros I think!

When I was up Beinn a Bheithir last summer, and was scrambling up a massive chunk of rock came away in my hands and I nearly fell off the ridge. My life flashed before my eyes