The phrase "blood and snotters" was used during a piece on the BBC Radio Scotland Outdoor show which I was listening to this morning en route to this walk. Little did I know then that it would be a very apt title for my walk on a very wet and wild Saturday.

I had originally planned one of my bogey hills for this weekend - Beinn Mheadhoin. I planned to walk in on the Friday evening to the Hutchison Hut before claiming the pesky hill in the morning. In fact, I had originally scheduled it for last weekend, but then something else came up and put paid to that. Then Kev and I had planned a walk for next Saturday before my wife informed me that I was going through to Paisley that day to pick up my niece and bring her through to Perth. So it had to be this weekend, and Mheadhoin was back on. I mentioned it to Kev and he was interested. However a few days later he had to pull out so it was just me. Then the weather forecast for the weekend suggested the weather was going to turn pants. In the meantime however my mother-in-law had made arrangements to have Ailsa this weekend, and with Debbie at a work Christmas do on the Friday night and then out on Saturday for a boozy afternoon with some other mums, it looked like the ideal opportunity for me to get out. If only the forecast wasn't crap.

Before I knew the forecast, I had already scrapped the Beinn Mheadhoin idea and had formed a notion of driving up on the Saturday morning to do Spidean Mialach and Gleouraich. The forecast then put paid to that, and any notions of a similar scale. By Friday evening when I was checking various weather sites and watching forecasts on TV, I was on the verge of packing it in altogether, but given the open goalmouth, so to speak, I had to get out somehow. I hadn't been out since the Kinlochleven meet in early November and the last week or two at work had been hard, with a huge workload ahead of the home straight to the Christmas holidays, so I really needed a hill fix.

I packed, looked out a few maps to give me some options, and set the alarm for 6.30 - the forecasts had suggested that the day would start better than it would later become. As it was, I was awake a little before that. Looking outside all looked calm. I had breakfast and made the decision to go for Meall an Fhudhair and Beinn Damhain.

An uneventful journey had me up at the start in Glen Falloch by 9 o'clock and off up the track 10 minutes later with Lucy in tow. A landrover passed us just before the railway bridge but that was all the human life I saw until I got back down almost to the car nearly 4 hours later. Strange!

Anyway, as for the title, well it was fairly obvious from the outset that today would be an ongoing and ultimately losing battle against the snotters. As for the blood, there were a couple of blood loss incidents to provide distraction from the drenching. 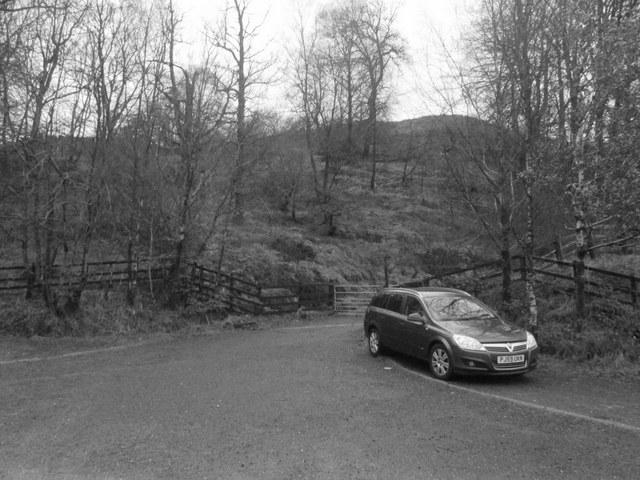 Up through the trees towards the railway Glimpse of a railway bridge 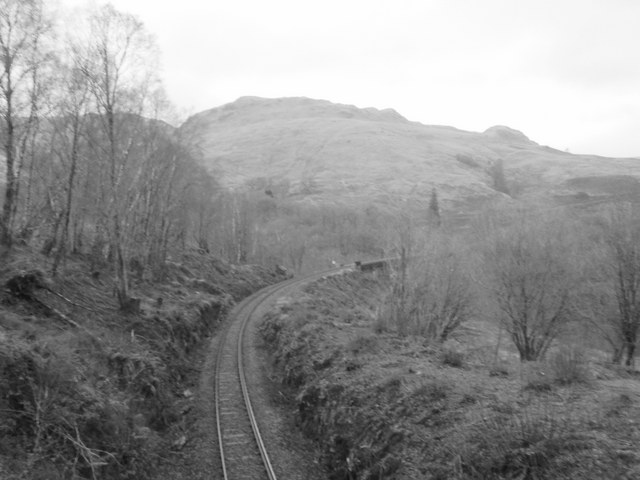 Rail tracks from the bridge 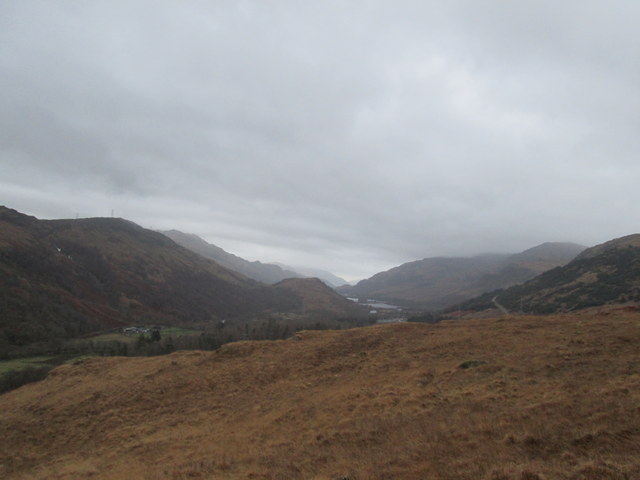 The Troisgeach ridge from the junction in the track Just before the junction in the track the rain came on and the waterproofs came out. From then on it was a real drenching. I quickly decided to give the Corbett a miss today and just get the Graham under my belt. Frankly I couldn't be arsed doing the tricky looking Troisgeach ridge in these conditions! The Troisgeach ridge again - won't be getting up there today! The wind wasn't quite as bad as some of the more eye-watering forecasts of gusts approaching and indeed exceeding 100mph, but once I got above about 600 metres it started to really wind up. There were one or two exposed stretches where I was really glad that I wasn't on an exposed ridge or the Cairngorm plateau. Just before the summit came the first blood loss incident - a slip on a sodden scrambling section (I had taken my Sealskinz gloves off to get a better handhold and besides, even they had completely waterlogged in the downpour) - resulting in a gash on the palm of my left hand. 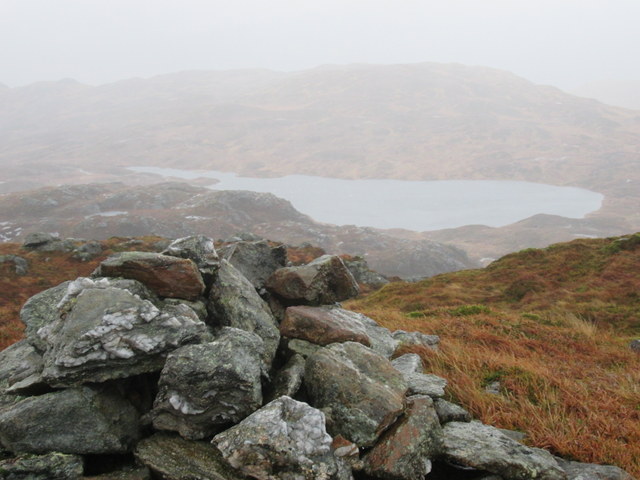 Lochan Beinn Damhain from the summit I didn't linger at the summit before taking a more direct line back down into the glen for the walk back through what could only be described as a swamp to the little dam at the start of the track. Just by the dam came the second blood loss incident of the day when I suddenly tasted blood in my mouth before realising that I had a nose bleed. It was quickly stemmed and I resumed my walk back along the track below Troisgeach. It was frightening how the water courses had swollen. Torrents of water were now rushing off the slopes and into the ditches by the track. These were now not coping and the track was beginning to flood in places.

I was back at the car in just under four hours and Lucy seemed very pleased to be able to jump up into the back of the car and stretch out. I did what I could to dry out before heading to the Londis store in Crianlarich to pick up some beer and then negotiating the surface water on the roads back to Perth for a well deserved hot shower.

Good effort in getting out Graeme

) fully intend to venture out somewhere myself tomorrow

Despite the weather you had today there were still some good views to be had by the looks of it. Shame you didn't get the opportunity for the Corbett though, as it's a good little hill in my view. Still, you can return when the weather is fairer

Same as you will be able to do with Mheadhoin one day.

Hard to believe that you didn't see anyone out on the hills today, where was everyone???

Well done on still getting out there today Graeme,you're a braver (or more foolhardy) man than me. Still some decent views by the looks of it despite the grim weather.

Good on you on getting out!

that looked pretty horrible, yet early in the morning it wasn't so bad in Carnoustie, then the wind picked up, and I was glad I was doing DIY

Rather you than me, that looked miserable. I settled for the footie on the radio yesterday and a quick walk this morning when the weather had improved.

Aye it's been a grim weekend Graeme,you did well to brave the elements

Here's hoping for some decent days over the hols.

man. Good to see you doing something tougher than the Rannoch Moor Marilyn

You did well a'bhalaich , you would not have managed to stand over here at sea level such was the wind

Aye need a fix myself , early November as well

Hmmm, yeah, not sure I'll be updating my avatar or FB profile pic with this one any time soon!

It was bliss, and the cold beer afterwards wasn't too shabby either!

man. Good to see you doing something tougher than the Rannoch Moor Marilyn

Yeah JC, I just couldn't bring myself to do the Rannoch Moor Marilyns!

Sounds like a plan worthy of some serious consideration!