A daring beginning - which I didn’t really know was daring until I somehow managed to finish it- alone. I couldn’t possibly have ‘bagged’ these mountains. They were just kind to me on that day. I can’t imagine I would have been able to do it had I not been in company of the mountains.

I had to have a good breakfast. So I waited for Morrison’s in the town centre to open, had a good fill and then set off- late, about 9:30 am. The car park is only 15 minutes away from there. The assault of midges started at the car park (and I smeared myself with the liquid that smelt a bit like kerosene). The falls that you can see from here were probably that of Allt Coire Eoghainn. In the small woods, where I had a lot of company, one could hear the falls of Steall in the distance, faint. After a clearing, comes the wire bridge (and the loud sound of the waterfalls). Not as wobbly as I had imagined but very stable. But still a fall would have been nasty and wet. It was very tempting to go back and forth on it, which luckily I decided would be unwise as a lot of time and energy were to be required later. Once on the other side, the white hut appeared and the company disappeared.


Soon I was at the foot of the wonderful An Steall waterfalls. I tried to go right in it as much as possible with my camera (yes I took a proper camera, which was worth it). Again, could not tarry much longer listening to it but had to move on. Then came the annoying bog when skirting around Coire Dubh an Steall - very impressive looking rocks. I met two walkers there who had camped elsewhere the previous night and we talked about our routes. They were slightly disappointed to learn that they had only done ‘half the Ring’.

The way up, to An Gearanach, was tough for me - palpitation, sweating and aching but nothing dangerous. A couple who were far behind soon overtook me. At some point, on the way up, one can see most of the Ring - how deceptive it is ! It only looks ‘not difficult’ ! It took me four hours just to get to the first summit !

On the top of An Gearanach, it felt like an achievement in itself - my first Munro ! All round , everywhere I could see, were just mountains ! There were about 8 people there. I waited for them to move on while having food- one old looking man went back down, the others moved forward. I only started 5 minutes after they left - but suddenly I was alone, nobody was in sight - in 5 minutes ! How small were we in this vast landscape ! An Garbhanach was not difficult at all and I made it there quickly. Another peak, can't remember but beautiful Stob Coire a’ Cairn had some nice scrambling on rocks- felt easy though. I had to pause a lot as I could not get enough of the view. Wonderful !
When I looked back at it after coming down I was amazed - ‘How on earth did I manage that? It looks rather dangerous from here!’ Here I made a basic navigation error - I had put the map away after An Gearanach because the path was obvious and because I needed to be hands free. I kept looking at the scene around but stopped identifying features. I pulled it out again now, thinking that I had finished Am Bodach ! Obviously, I got all wrong compass directions. The error dawned on me quickly enough.

At the foot of Am Bodach, I got a bit scared looking up at the cloud-hidden summit which seemed too vertical for comfort. I could see another path skirting around at it’s base which would avoid climbing it. But then, it had to be done. Otherwise what was the point of being there. I simply had to go on and do it. It was grueling. One step at a time. Strangely, although it seemed that there was no path, there was a path. It just becomes apparent as one goes along. But it gets steep with every step. At one point I leaned on my back and looked down, just before clouds hid the view. It was almost vertical ! One mistake and the fall could be fatal. And I was alone ! Thankfully, I was not afraid and carried on upwards. Then I nearly gave up and sat for while, panting. But there was no other way but up. And then suddenly after only a few minutes - the summit ! I had made it ! In one piece! I did a little dance up there. 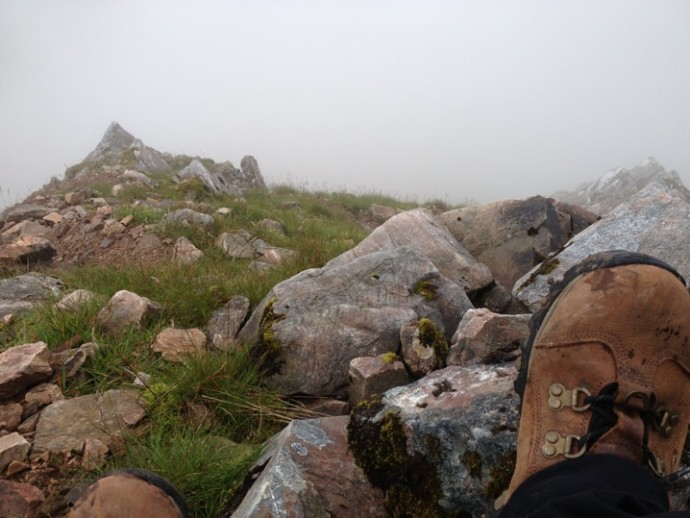 Looking down from the slope of Am Bodach 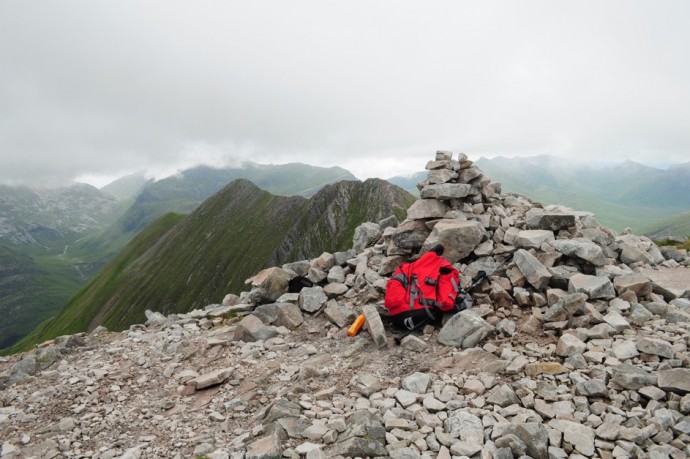 I could now see the couple who had overtaken me, on the way forward - far away, tiny red dots. Then suddenly, clouds gathered from below and passed right through me! The wonderful expansive scene was now in clouds. I guess this is what is called inversion.
I waited for it to clear, while studying the map. 10 minutes and all was clear again. But I couldn’t see the couple any longer - where did they disappear !

At Sgurr an lubhair, I had to seriously think if I could finish the rest of the Ring or it would be wise to turn towards Lochan Coire nam Miseach and then down the valley overlooked by Stob Ban (a marvelous rock formation). Here I met a father and son and their dog. They had come from Stob Ban. I did my calculations and finally decided that I will complete the rest of the walk. It would be silly to leave behind the Devil’s ridge !

The view of ridges was spectacular from here onwards. From Stob Choire a Mhail it was truly impressive and precipitous; with Stob Ban in view all the time. When I looked upon the Devil’s ridge it did not appear that devilish. I got very excited and made the mistake of walking with the camera in my hands. I then followed a small path which led me to the side flank of rocks - rock on one side and the abyss on the other - this was the Devil’s ridge indeed! I slowly put the camera back in and very cautiously got myself out of there, only to realize that there was an easier path which the father and son were taking ! The start of the Devil's ridge View from the top of the Devil's ridge

Finally, I made it to Sgurr a’ Mhaim ! Looking back I had a feeling that was becoming familiar now- “How on earth did I manage that!” Finally, it was done ! I had run out of water by now (all 4 litres) and there was quite a way back to my car. The father and son (and their dog) soon joined me. The beautiful ridge south of the Devil's ridge

Now it was crucial not to make a navigation error - it was the northwest ridge that was the right one. We conferred and I set forth first. From the top it appeared smooth and dangerous but soon I was crunching on the pinkish stones of the Sgurr. Again, how deceptive ! I was hurrying down as it was 7 pm and I had still to pitch a tent and get some food ! It was taking forever, I tripped twice but luckily did not get injured.

Finally, I made it down and as I looked up, for a moment the sun was shining on the top of Sgurr a’ Mhaim. I drudged toward the car park in surprisingly tolerable pain, feeling very proud (and lucky) indeed. There was just enough light so as not to need a torch. It was 9:30 pm! 12 hours!

This day has changed my life ! I will keep returning for as long as I live. I wonder why? It has very little to do with a sense of achievement. For me, it is about being very aware and alive and watchful in the company of mountains. It is blissful to be alone here.

A good start to your Munro bagging, most start on easier routes. Nothing can stop you now.

What a way to start the journey

Loved this walk the twice I've done it, though 2nd time around I didn't see a thing from about 300m