Each to his own

Each to his own


Well, that is what I had thought as I drove north to Callander under ever darkening and foreboding skies and the snow seemingly setting in

Surely I would be the only nutcase out in this weather

Clearly there were other nutcases out as well as me

But then again it was by now midday

As it was I was ultimately to enjoy the summit of Each to myself, meeting a group of about 15 people on Eas an Eoin heading down off the hill as I was headed up. Despite being very calm at this point the suggestion was that it would be quite rough on the summit itself 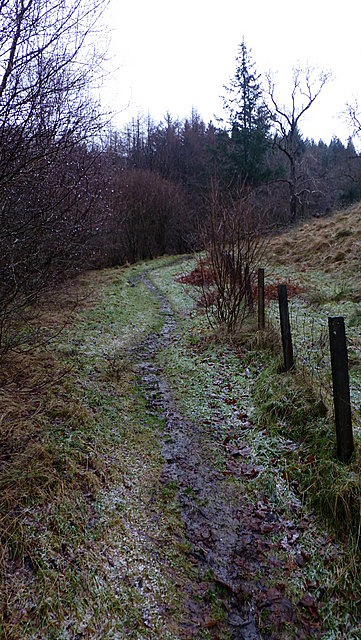 A wet and boggy start to the climb 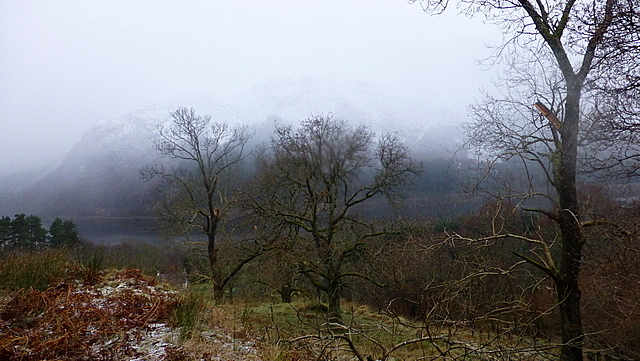 Ben Ledi is there somewhere 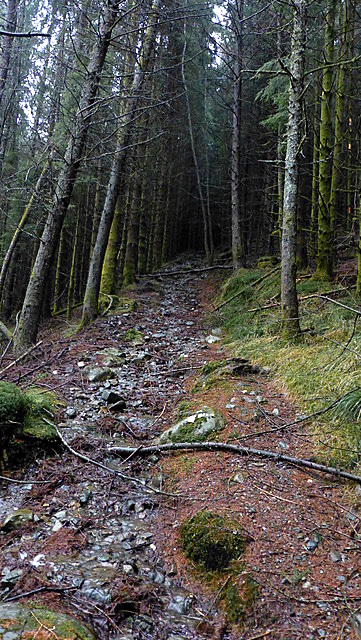 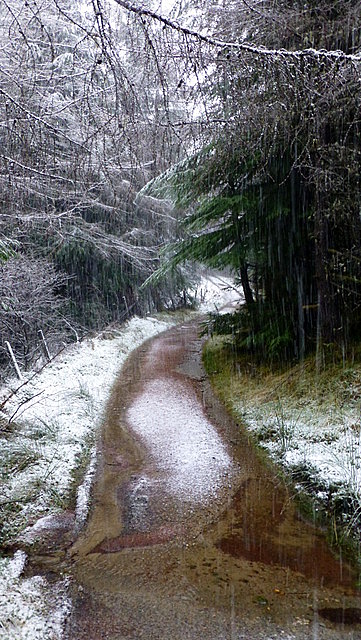 I’d just come off the back of a pretty manic month at work and Christmas and the whole Festive Season had thus far passed me by. Hillwalking though has very much been a spiritual experience for me. A time to purge myself of the week just gone and ready myself the one to come, as well as a time to contemplate the whole life, universe and everything type of stuff. And I certainly felt that sort of connection as I arrived on the snow covered land rover track, with the snow continuing to fall 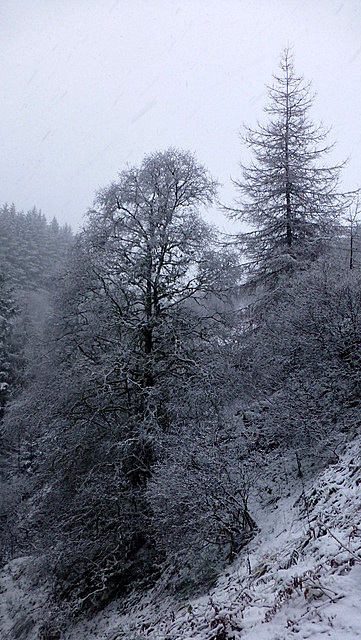 Walking in a winter wonderland

From the land rover track it was an easy, short amble to the signpost pointing the direction up Beinn Each. 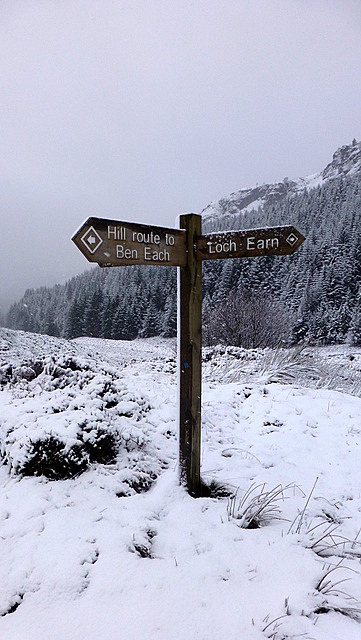 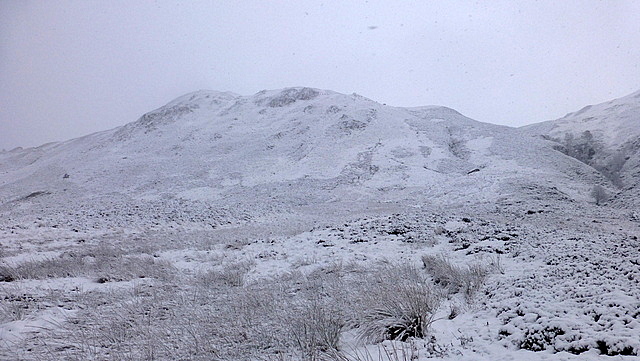 Toward my target for the day 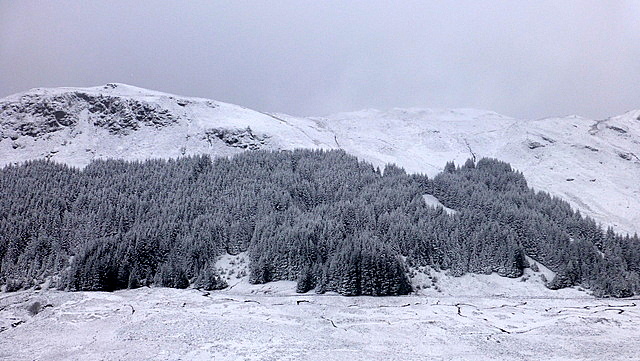 As I set off up the track I spied the group heading down. I stopped for a brief chat with them as I made my way up. While there was a good amount of snow it was for the most part soft and slippery stuff, rather than being consolidated. I always find this stuff a bit tough on the ageing joints, and today was no exception

Eventually though I was over the climb and on my straightforward ground. So it was a bit of a bummer to find this was when the wind decided to pick up, blowing the already fallen snow all over the place. Not quite a white out, but pretty close

It was turning out to be every bit as rough as the group I'd met had suggested and slowed me up in those moments where the path had disappeared under the snow. 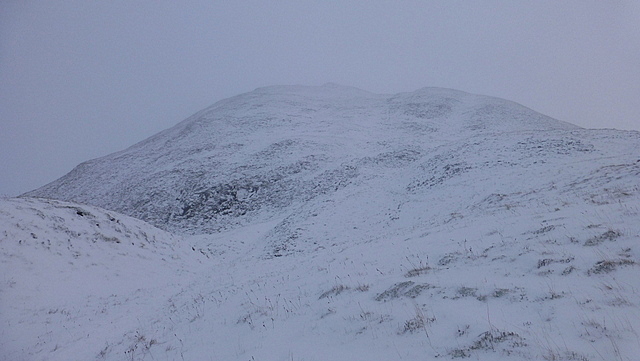 Looking toward the summit of Beinn Each 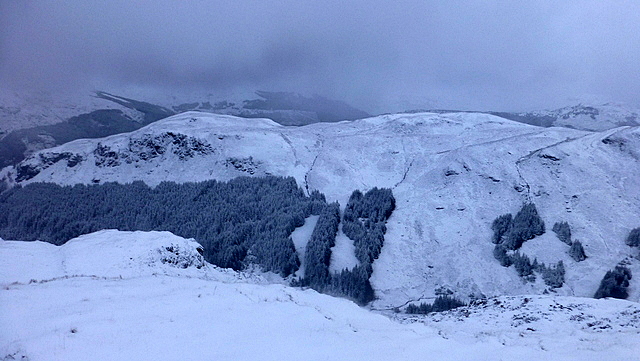 The final section was windy..........very windy, but soon enough I was standing at the substantial summit cairn (must have had at least three stones in it 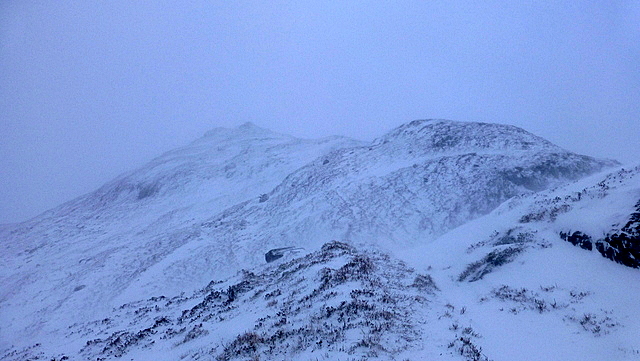 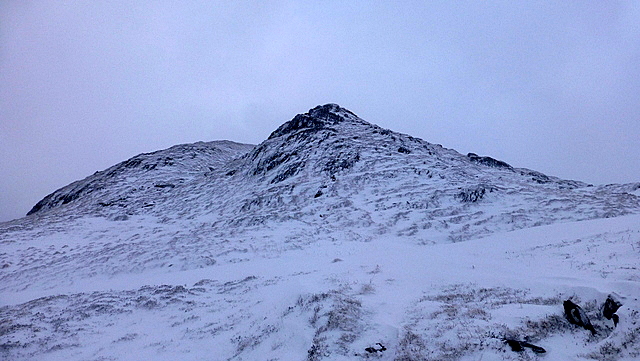 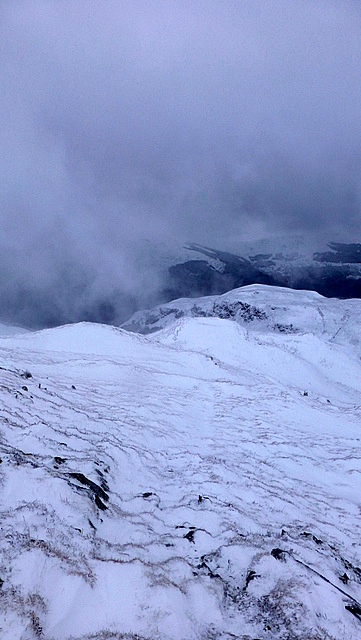 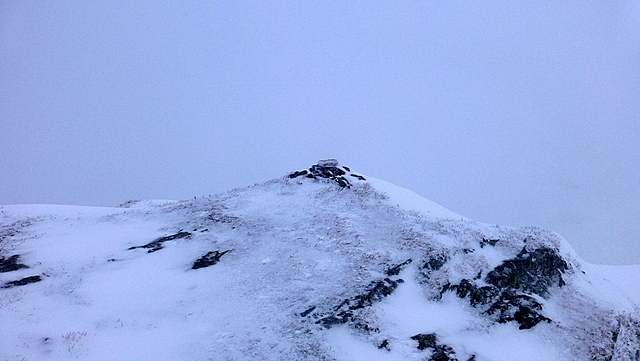 I didn’t hang round long, as it really was quite windy and visibility when the snow was whipped up was pretty rotten

Sadly no views from the top, but obviously having descended for a few minutes and the summit was clear and there was blue sky too 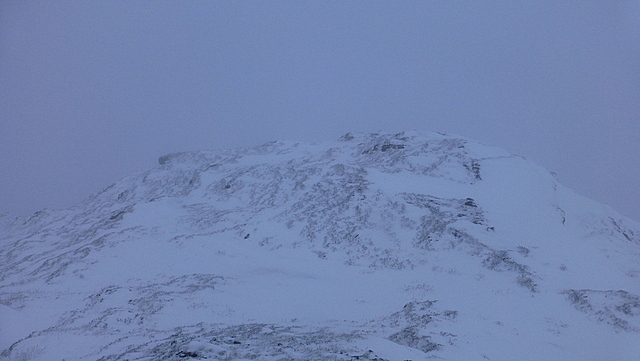 A bit of a foreboding view in descent 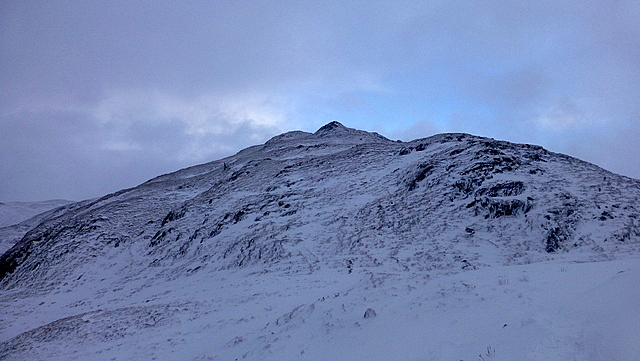 But obviously clear behind me 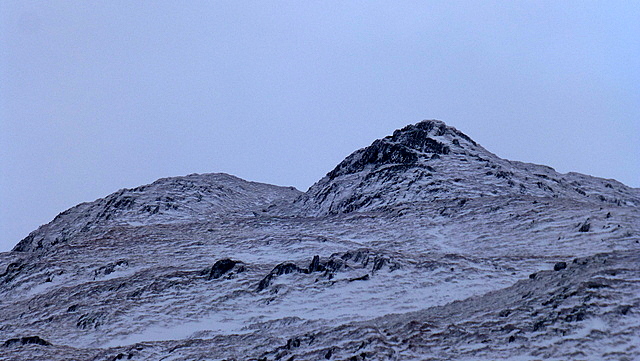 It didn’t last though, and soon the cloud and snow was back, hitting me in waves on the way down

On the climb up the wind had been on my back, so in descent it was obviously in my face. Not always pleasant as my face took a battering and I struggled to see with snow being forced into my eyes. Had to stop a few times to turn my back to the wind while the worst of it passed over me. Eventually though I was passed the worst of it and heading down toward the land rover track. A brief clearing sky ahead of me

Pano of Beinn Each

Once on the track it was then an easy walk back to the car; especially enjoyable making my way back through the forest, which was now starting to get a bit dark as the light was starting to fade 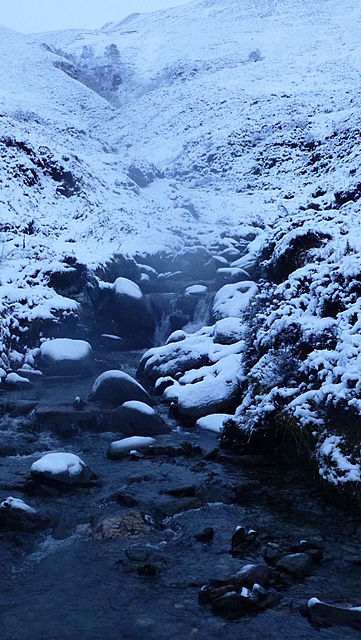 All a bit wild back at the car, but I was happy to have got myself out on a hill despite what the forecast had suggested

Well done Pete,we did Each in similar conditions a few years back,must visit it again sometime.Have a good xmas and let's hope this weather gets a bit better sooner than later

Yup - was up this hills en route to Stuc a'Chroin a few years back - does give some great views. Would agree it's a bit boggy early on but fine once you're out on open ground - cheers

Nice one Pete. Many a year since I was up there. Think it was my second Corbett.

lovely I especially like the second picture, very atmospheric

Still better views than I got - did it in pouring rain a couple of summers ago, saw nowt and got absolutely soaked