A bit of Kentmere

A bit of Kentmere


(Still catching up from the spring - this is part 3)

Tagging two days in the Lakes onto the end of a weekend in Manchester seemed like a clever idea at the time. After two days of dances and dance classes it didn't seem like such a good idea at all, but the train duly deposited me in Kendal on Sunday night. I was staying in the hostel, which is a nice old place with uneven floors, and had a whole dorm room to myself - bliss.

I'd never been to Kendal before - it's a nice place, but a bit confusing, with lanes and wiggly streets, and I was really too tired to want to sit down and eat, and I ended up sitting on the riverbank eating a kebab. That must have revived me a bit, because I went wandering around a bit more, and up to the monument on Castle Howe. 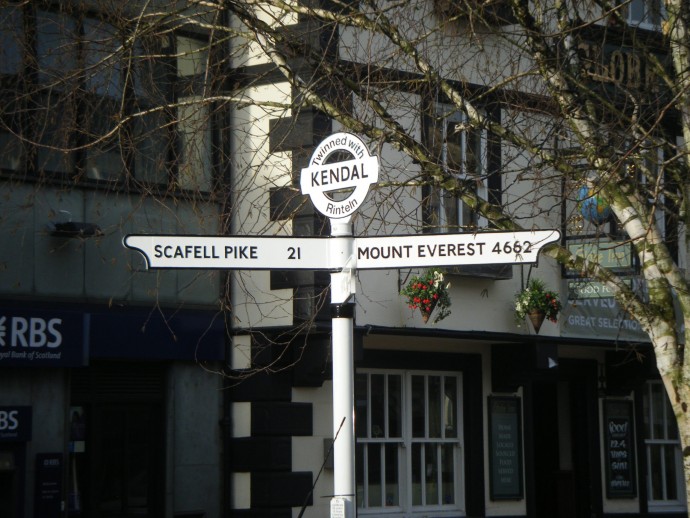 I had a bit of trouble in the morning because I'd lost Booths - I knew I'd walked past it the night before, but I'd walked past everywhere the night before. When I found it I forgot to buy any breakfast, so as I knew I'd missed the first train I went to Costa for breakfast instead - a very urban start to a walking trip. The second train of the morning took me to Staveley, to start the walk out to Kentmere. It's a nice walk, and a quiet road, although even there there were roadworks! I left the road at the factory and crossed the bridge to follow the track up the far side of the tarn and come out at Kentmere Hall, which is a very nice old building, and the apparently famous Badger Rock. 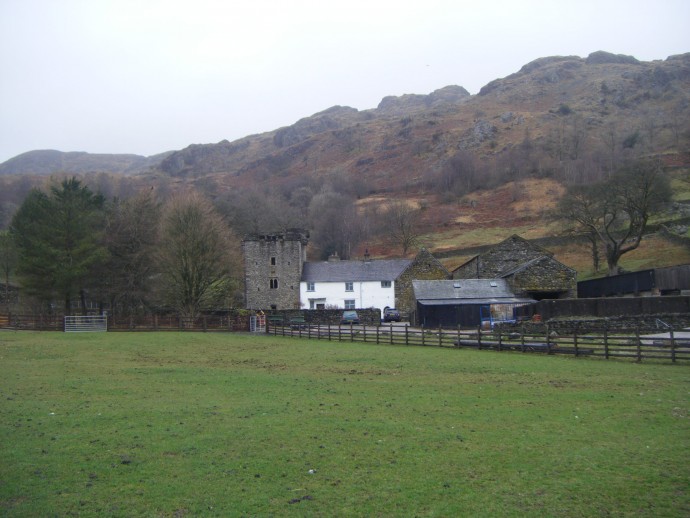 It was a dull dreich day, all grey and brown and faded green, until I came to the church and found the archetypal host of golden daffodils - a whole churchyard full. The church is nice, with a window looking out towards Green Quarter for lifting your eyes to the hills. A host of golden daffodils

From here it started to become a hillwalk rather than a wander, but it looked like my gift for finding clear weather was failing, as all the tops of the hills were in the cloud. Heading up towards High Lane I found that going uphill was actually quite nice for tired legs, as putting my heels down lower than my toes was stretching my muscles - and even better I could see the clouds starting to clear and drift away from the summits ahead of me, although there were still only ghosts on the far side of the valley. Upper Kentmere in the clouds

The bridle path towards Longsleddale (also with roadworks, or at least path mending) brought me to the wall which leads up onto Shipman Knotts - a nice scrambly place, but now that I was out of the valleys the wind was uncomfortably strong at times - going up into it was bearable, but I wouldn't have liked to come down with it behind me, so I was committed to the ridge once I was up. The summit of Shipman Knotts is nothing special, but it's difficult to get to - on the other side of a wall with no obvious way over it, and even worse to climb with the wind trying to blow me off it again. But the views improved from then on - into Longsleddale on one side, and the summits of the Ill Bell ridge appearing on the other. Heading to Kentmere Pike was easy walking at first, even in the wind - I stayed on the far side of the wall and fence until I met a stile - until I started having to avoid snowmelt collecting in floods and new lakes and literally running off the hill. Kentmere Pike has an odd divided summit - cairn on one side of the wall, trig point on the other - but at least there's a stile between. I sat down in the lee of the wall for something to eat, and only discovered then that I'd cut my knee climbing over the wall on Shipman Knotts - I had little red dots all over the knee of my grey trousers where they had moved over it, and no plasters in my bag. On to Harter Fell was broad, easy walking, but walking against the wind was still just slower than I had realised it would be - I was behind time, and not sure of the best way down, and reluctant to leave behind odd hills.

The summit cairn on Harter Fell is just plain weird - as if a lot of little devils had tried to have a bonfire and forgotten that metal doesn't burn - or maybe it does for them. The view from the path down to Nan Bield Pass, with Lingmell End and Kentmere revervoir and the Ill Bell ridge on one side, and Small Water and Haweswater and Long Stile and all the Mardale hills on the other, took my breath away with the sheer scale and space of it all - I know all the best views are supposed to be in the west, but they'll have a lot to do to be better than that moment. Sadly it was also getting windier, as the wind came howling through the gap - when the gusts came it was just a case of sitting down and waiting. As I came to the first depression with the shelter it had eased again, and I thought I might get up on Mardale Ill Bell - by the time I reached the second I knew I wouldn't, and followed the little path down towards the main path and Small Water. It was difficult to tell at times whether I was walking on a very wet path or a very stony stream - the water was still flooding off the hill as fast as it could and seemed determined that the paths had been made for it - but when I came past the three shelters by Small Water I knew that it was supposed to be the path, even if it didn't look much like one at the moment. The stepping stones at the outflow of Small Water were several inches under water, so there was nothing for it but bare feet - and snowmelt is damn cold to walk through! I started to meet people again, apparently coming up from Mardale Head to look at the waterfalls. 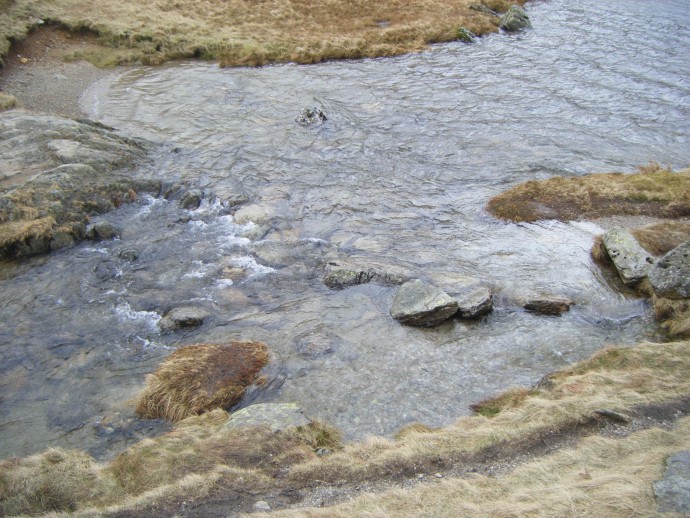 From Mardale Head it was back to the road again, and along to the hotel, wondering if I would go for High Street the next day, or stick to the original plan... Re: A bit of Kentmere

Really enjoyable read with some lovely atmospheric shots of the hills and vales, I've not been out that way for about 10 years now and yet it remains unchanged

Re: A bit of Kentmere

Great photos, despite the less than desireable weather! My girlfriend and I are going to do a night camping in the lakes, and still havn't decided quite where to go yet. This area looks like a fine contender though!