Left Glasgow at 7.00am sharp to avoid most of the early morning rush hour only to be caught in a slow moving build up just past Cumbernauld – yes you’ve guessed – ROAD Works and the preying vultures on poles (Average speed cameras). Best laid plans were soon again thwarted at Perth with OH NO! More road works AAGGGHHHH!!!! No worries though the sun was shining and we had some good sunny day sounds on – in fact we were even singing and shimmying to a ABBA track (how sad) though Isaac was not approving, but he still shimmied along with a laugh. Eventually got to Bridge of Tilt and set off at 10.30am (only an hour behind schedule) with a spring in our step and a most glorious day ahead as the sun was in full shine mode and the skies were blue on a crisp cold day. The mountains looked in full splendour ahead and we were in good spirits heading up the path to our first mountain Carn Liath – Beinn a’ Ghlo at 975feet/ 3199metres. 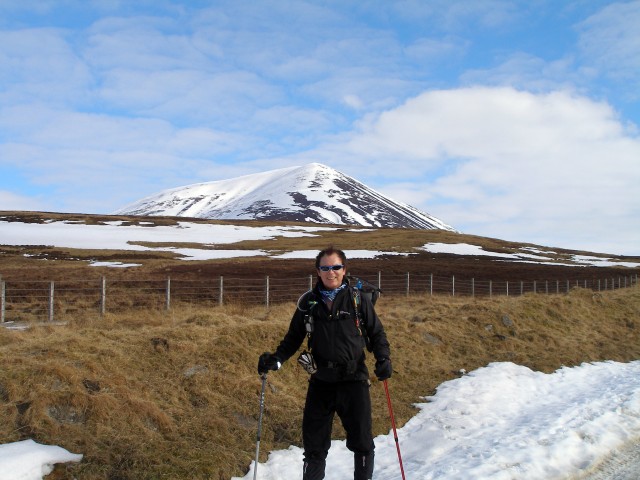 We followed the path left past the Huts and soon into the snow which was crisp and slightly soft beneath our feet. Thanks to a small party an hour ahead of us, a good trail had been formed and gave us that slightly firmer easier going snow to step on to. (Thanks guys who ever you are). This helped us make up a little time but we could not help stopping every now and again to take in the wonderful panorama unfolding around us and time to catch a breath and take in some needed fluid. This was going to be a wonderful day we could just feel and sense it. 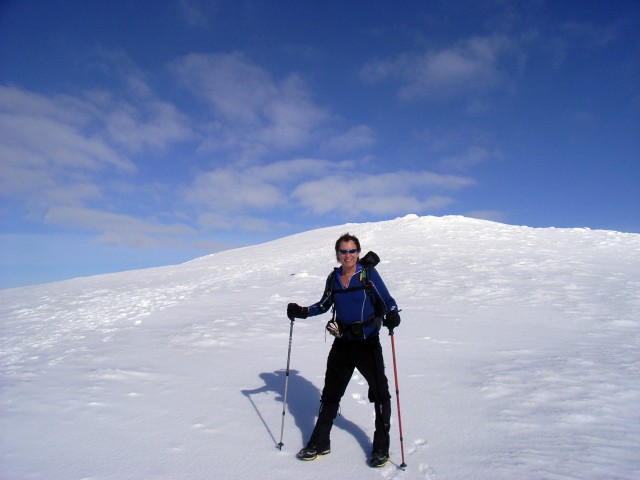 Heading to the top of Carn Liath

Got to the top and boy did we have smiles on our faces. The view looked amazing and we could see the rest of the ridge and mountains we still had to do today, clear ahead of us, and it looked FAB. Issac was amazed at the amount of Mountains surrounding us as he thought with the drive up and the walk-in that this part of Perthshire was quite flat. I thought this was a good introduction to this part of Scotland for my Spanish friend and would give him a taste of more days to come in the mountains around here and further North. Just time for a few shots and put a jacket on as the slight wind brought a little chill along with it. Set off on the ridge, which dips and curls before sweeping up to the next top Bragh Coire Chruinn-bhalgain with a bit of effort tramping up in the snow being rewarded with another fantastic view now overlooking Carn nan Gabhar and Airgoid Bheinn. View back on the ridge from Carn Liath Stopped for a well earned drink of juice and something to eat to keep up the energy levels for the next big dip down, and the push up to the big slope and Carn nan Gabhar which looked awesome glistening in the sunlight. Took time though to take in the splendour of this part of Scotland, and listen to the quiet and tranquil sound of nothingness. This is what getting away from the noise and greyness of the city is all about, and what scenery to go with it. Tranquility in the mountains 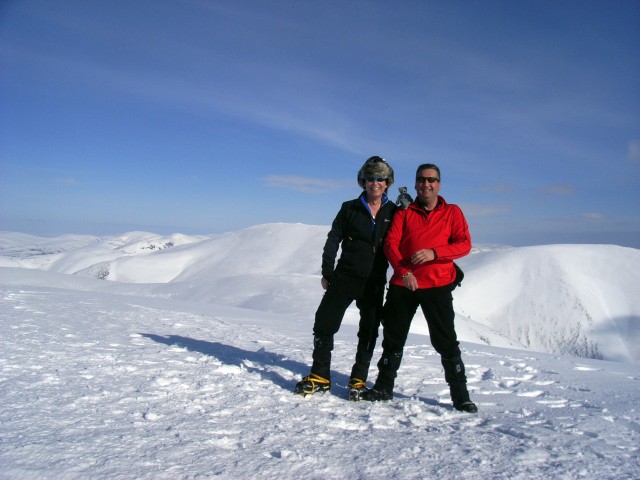 With Isaac and Wee Bear enjoying the vista

Set off again following the fairly flat and easy walking ridge which was making a good respite and this an even more enjoyable jaunt, but remembering to stay aware and keeping well clear of the corniced rim at the edge.
Heading down now on the big dip we wished we had brought sledges to have even more fun with, as we descended into the col. Maybe next time! Time for the push up the last big slope as we were now thinking and looking forward to some good grub and a nice hot cappucinno with the chocolate sprinkles on top. Yeah i know what you are thinking, but we just like to do it style, and after a hard days walking what’s wrong with a bit of indulgent pleasure. Your just jealous!!! Heay and i’m having chilli con carne too. But Isaac says he won’t be behind or down wind of me on the way down. Wonder what he means by that? Anyway the last bit is fairly easy up to Carn nan Gabhar but at the last part of the day it does take a little bit of effort as you go slightly diagonal on the slope to make the ascent easier in the slightly softer snow. Once on the top of the ridge it is just a last slog up to the cairn and trig point were thankfully people have dug around the deeper snow to create a wind block. On the flat ridge with the Carn nan Gabhar trig insight

Though i must say it has been tremendous today and the wind only slight, but can still bite at your hands when exposed. Time for some grub and a cappuccinos and lots of photos before making the decision to tackle the last peak Airgoid Bheinn before we lose daylight. 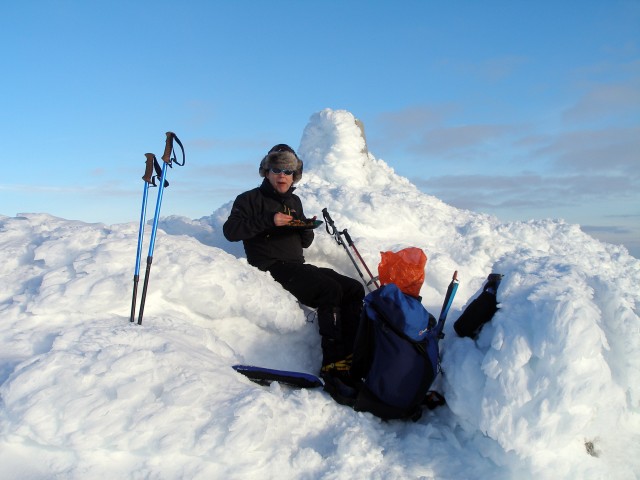 Best of Buddies enjoying the top of Carn nan Gabhar

We put on a little spurt after being nourished and head up the last peak watching the clock. The descent down begins and we watch the sun slowly lower in the sky as it begins to turn the mountain landscape into the lovely shades of reds and pink reflecting on the snow peaks and the sky that wonderful yellow and orange colours. The descent is fairly steep but made easier with the previous parties footsteps in the snow and crampons attached to help with a reasonably quick but careful passage down. Once at the bottom just before the darkness looms in it is just a long trudge back to the car joining the path on the way. The stars start to come out and give us great wonderment, almost like a firework work display in the sky a fitting send off to the end of a marvellous day in the Tarf and Tilt mountains. What a day – and what a wonderful ending to it. This walk ticks all the boxes for a great day out. One of the best yet.

LOL to the 'vultures on poles' but to be honest, roadworks speed cams I can see the point of as they're protecting workmen... unlike the permanent kind!

Great report on Munros I haven't done yet but am looking forward to... look forward to seeing your pics as well when they become viewable (external website?)

Which side did you descend? The Glen Tilt side or the other?

mountain coward wrote:LOL to the 'vultures on poles' but to be honest, roadworks speed cams I can see the point of as they're protecting workmen... unlike the permanent kind!

Great report on Munros I haven't done yet but am looking forward to... look forward to seeing your pics as well when they become viewable (external website?)

Which side did you descend? The Glen Tilt side or the other?

Pics now up for you to see.
Came down on the steep back nose of Airgoid Bheinn to join the path back to Loch Moraig around the bottom of Carn Liath

Now a fantastic report with pics

Nice report! How many Munros has "Wee Bear" bagged?

Wee Bear has done lots of Munroes including Mount Teidi at 13,000 feet. check him out at weebearscotland on facebook

Great photos and descriptions, which will be helpful when I tackle it tomorrow. Cheers!