It was back to work for lots of people today, but I wasn't one of them. Having only done one proper walk over the Christmas break, I was looking for something reasonably ambitious to start the year with. It looked like my long-planned visit to the far NE would just about fit if I didn't mind a little cycling in the dark. Ideally, I would have cycled all the way to Loch a' Choire and walked up from there, as there would have been good views across to Ben Klibreck, but looking at the train timetable, I realised I'd have to get a move on to get up these hills by the shortest route.

No-one uses the train for Wick as it takes over 4 hours from Inverness to cover the 110 odd miles. On the upside, the railway goes all over the place, and has stops at lots of useful places. Very scenic as well.

Sunrise over Loch Fleet (from the train): 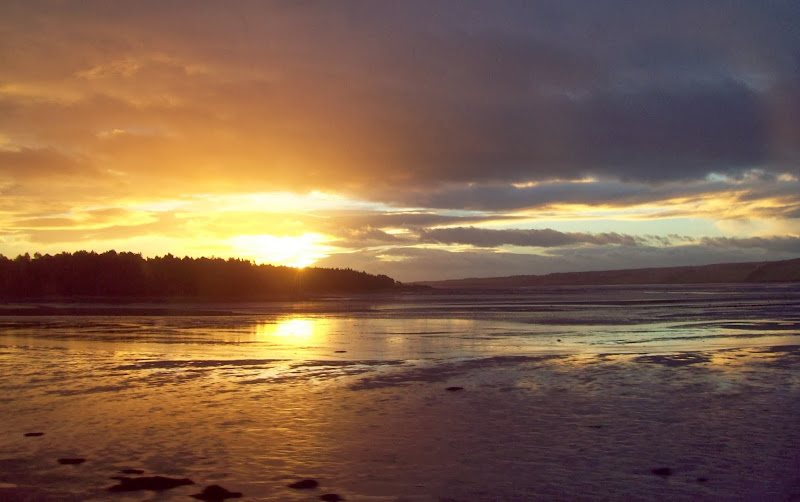 Kinbrace.gpx Open full screen  NB: Walkhighlands is not responsible for the accuracy of gpx files in users posts
Kinbrace is one such useful stop, where the railway diverts inland for the last time. 3 hours (!) after leaving Inverness, I was stepping off the train, which by this time only had one other passenger. The wind had crept up since leaving Inverness, and things were looking a bit grey, but that was always a risk given the current weather.

Ben Armine from near Kinbrace: 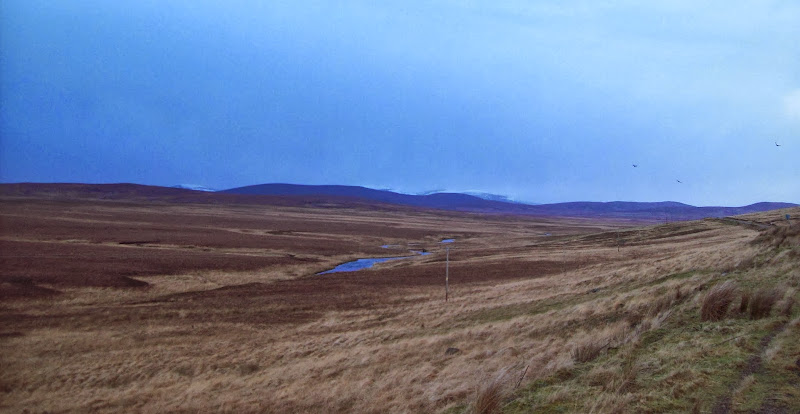 Technically the wind was coming from the south, but it was getting funnelled up the Strath of Kildonan, so I had it behind me for most of the ride in. My bike was unreliable after months of commuting to work on slushy, road salt covered roads, so I'd made a last minute substitution and brought Gill's instead. It wasn't an off-road bike, but the track to Loch a' Choire had a reputation for being well made. I made the most of the wind and covered the 12 miles to the start of the walk in about 50 minutes - about half an hour less than expected. The weather had improved on the way in, and a number of far north favourites had popped up, like Ben Hope and Ben Loyal.

Creag Mhor and Ben Armine from near Gearnsary: 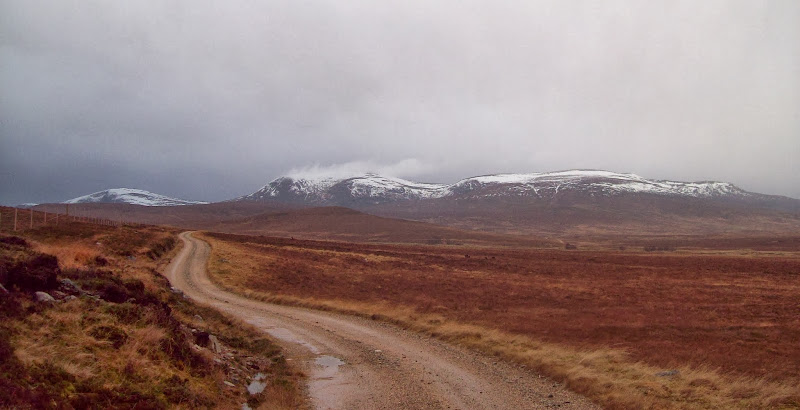 The usual place to start walking is where the stalker's path across the eastern slopes of Ben Armine meets the vehicle track. I left the track slightly earlier, spying a shortcut. The sun came out to the north.

Ben Hope and Ben Loyal from the stalker’s path south: 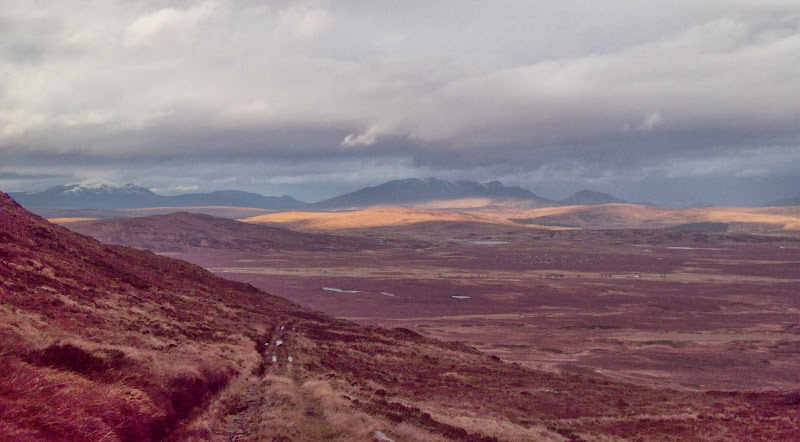 The path south was scenic. I had decided to head for Creag Mhor first so I could have the wind largely behind me on the high ground. The sun came out in other places too, and Morven and Scaraben were constant companions over the vast expanses of nothing. 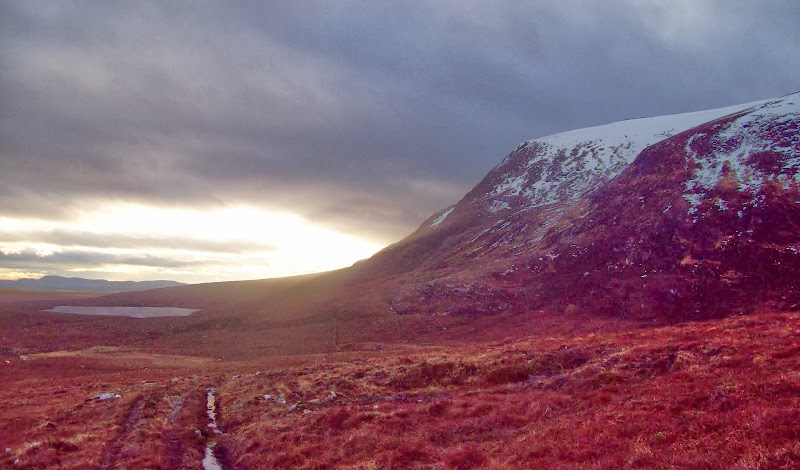 Gorm-loch Beag, looking east to the Strath of Kildonan: 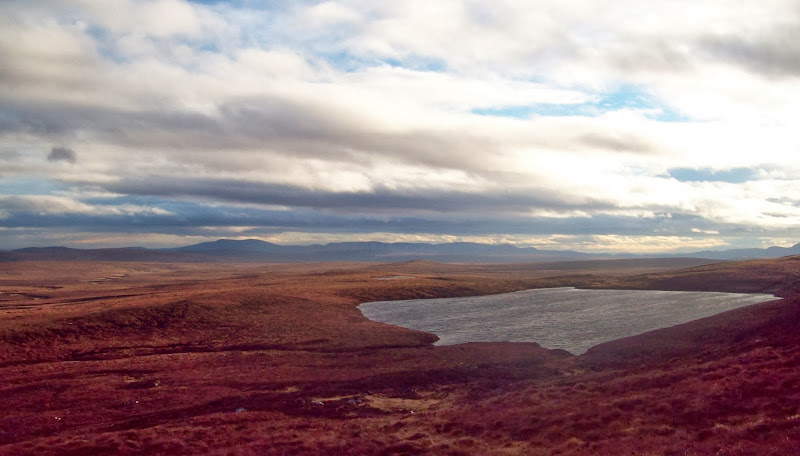 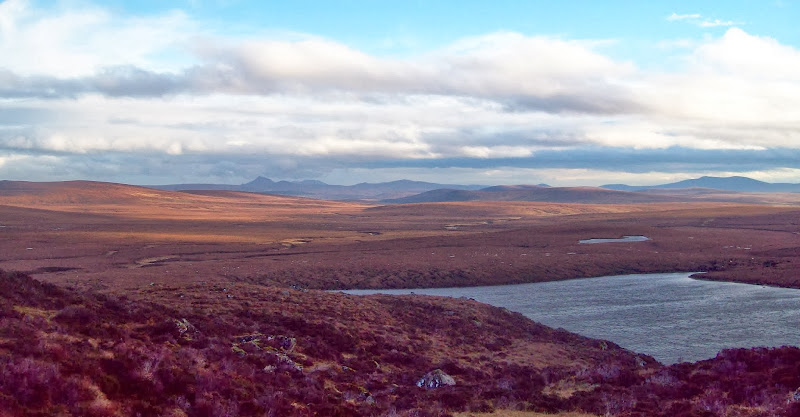 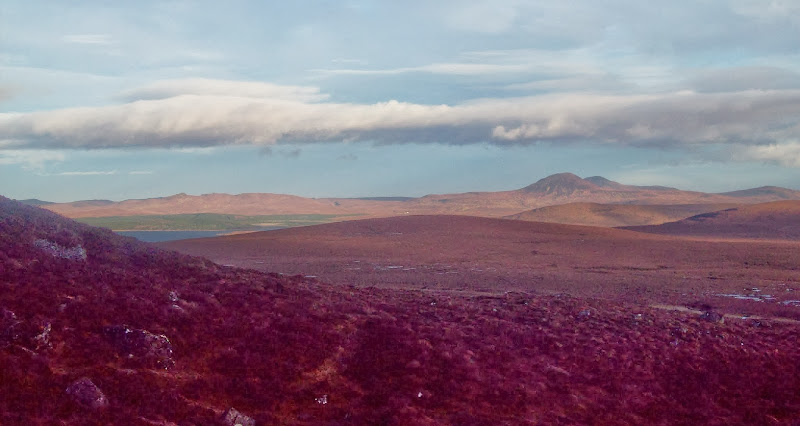 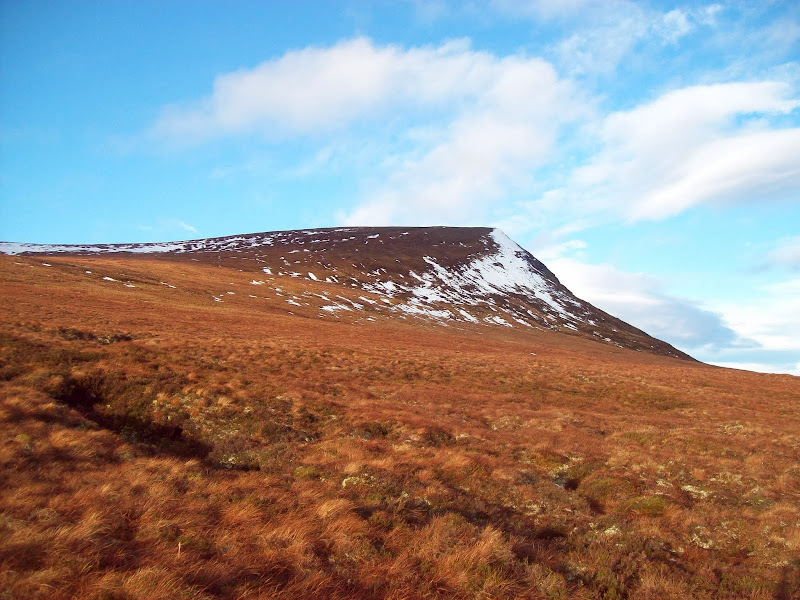 At the junction, I forked right for the col between the two hills, leaving the path shortly before the top. It was then cross-country over some peat hags to the northern shoulder of Creag Mhor. This is the point where I wasn't sure I'd have enough time to complete the round. I'd left my axe and crampons behind, but there was more snow on these hills than I had expected. Fortunately it was partially melted, but still fairly solid, so it made for easy walking. I finally reached the summit at about 1:10pm. Despite the clag to the west, the views were pretty extensive. Definitely a summit to linger on in less windy circumstances. 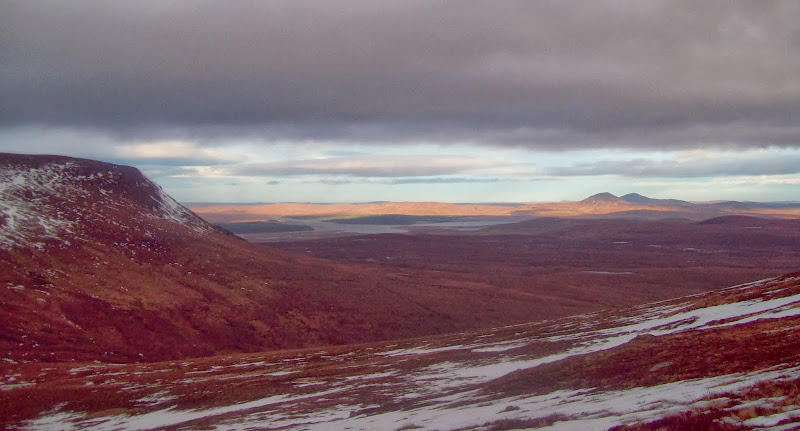 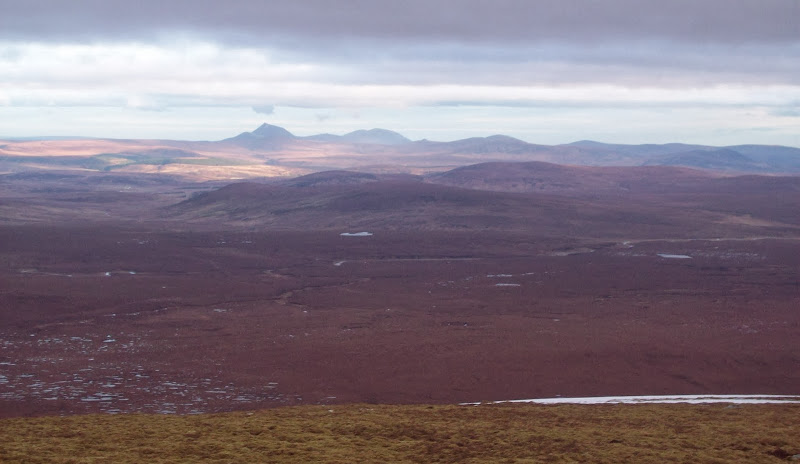 Loch nan Clar and the Griams from Creag Mhor: 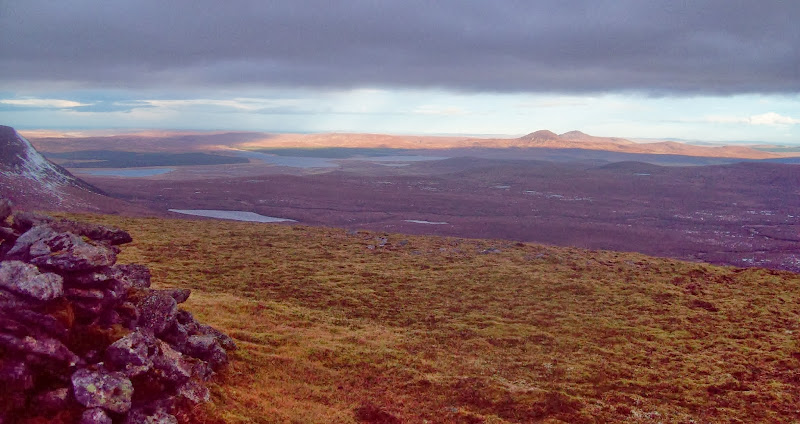 Zoom in to the Griams: 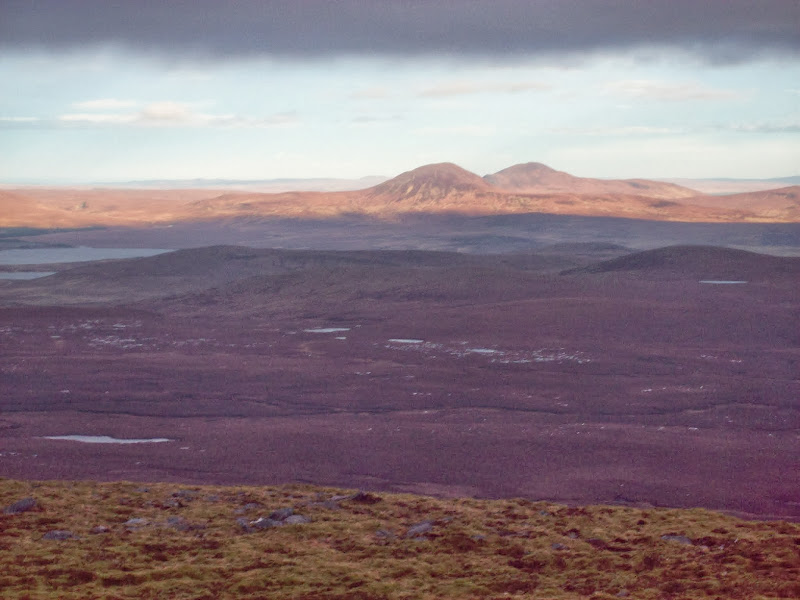 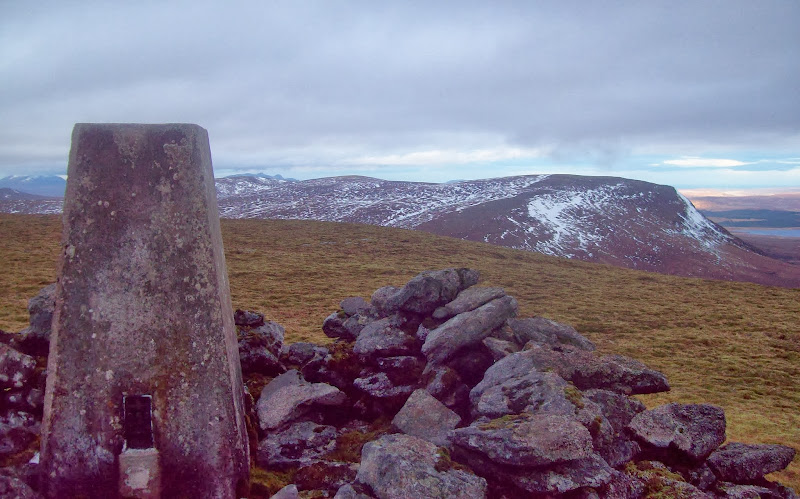 Things picked up after this. The descent back to the col was much faster, aided by some bum sliding, and the ascent of Ben Armine didn't take too long. In fact it took me less than an hour to get from one summit to the other. The wind was stronger on Ben Armine and there was more ice on the summit, meaning I had to pay attention to avoid getting blown over. Great views across the many lochs in the area, and also to Ben Griam Mor, which was another hill in constant view. I could even make out the faint outline of Hoy in Orkney away to the NE. Ben Klibreck didn't ever really emerge from the greyness, but would look good from here. 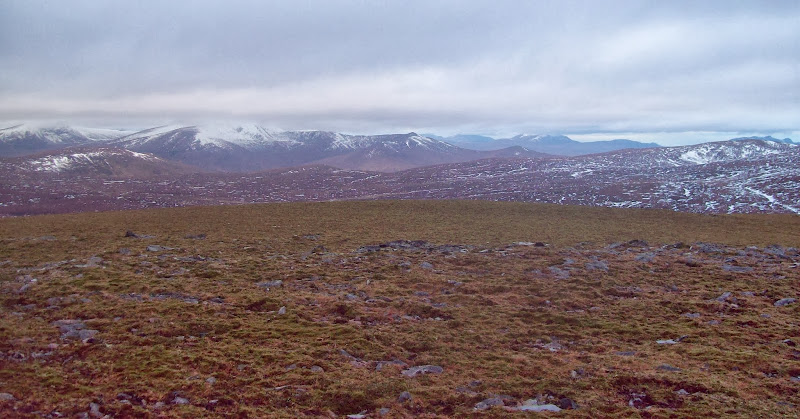 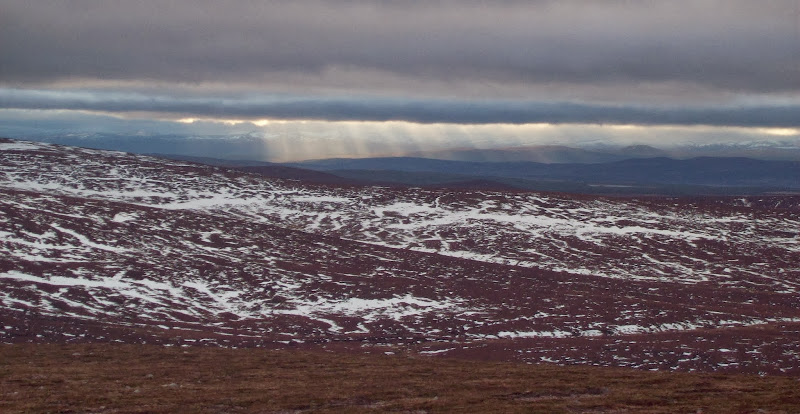 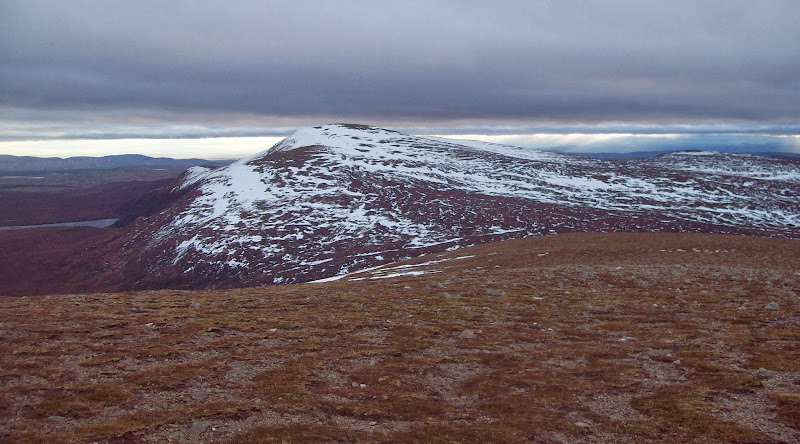 The best way back to the bike appeared to be via the summit of Meall nan Aighean. This would have provided the best views to Ben Loyal, but another shower moved in as I reached the summit. Then it was down to the NE, greatly assisted by more bum slides higher up. Some annoying tussocks appeared lower down, but before long I was back at the bike. I had decided that I would have to be back at the bike by 3:30pm in order to do the cycle back into the wind, but I managed to arrive 20 minutes earlier.

Return of the girly bike: 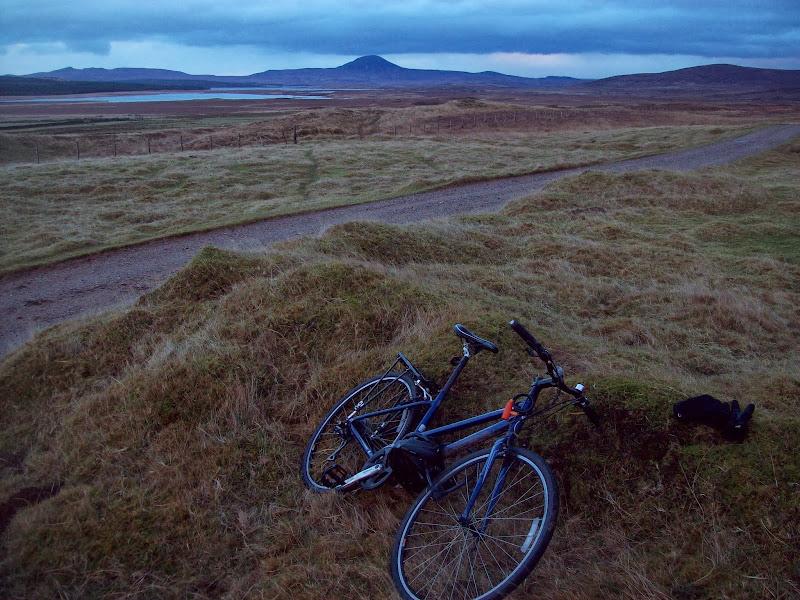 Looking back to Ben Armine: 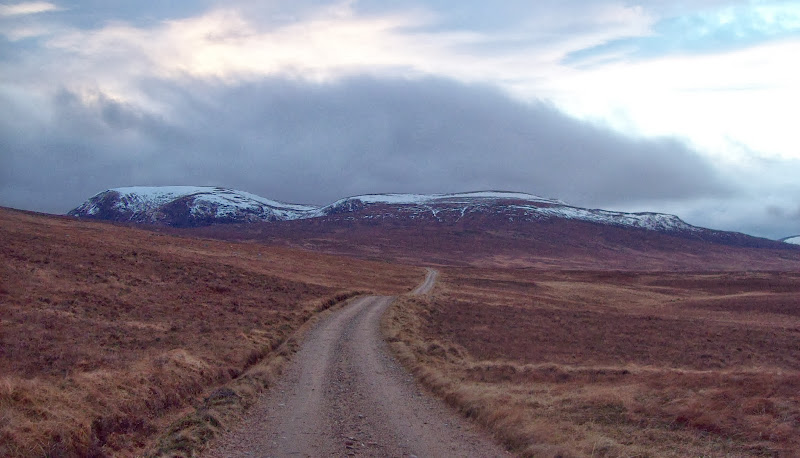 I hadn't done much stopping today, but rather than have a break by the bike, I decided to cycle a couple of miles back down the track and have a look at the bothy at Gearnsary. I had heard reports that this was a nice bothy, but the sestate seemed to be using it for storage of feed, and I could see pinholes of daylight through a couple of places in the roof. It would do as a shelter, but not a bothy I'd aim to stay in. Nice spot though. 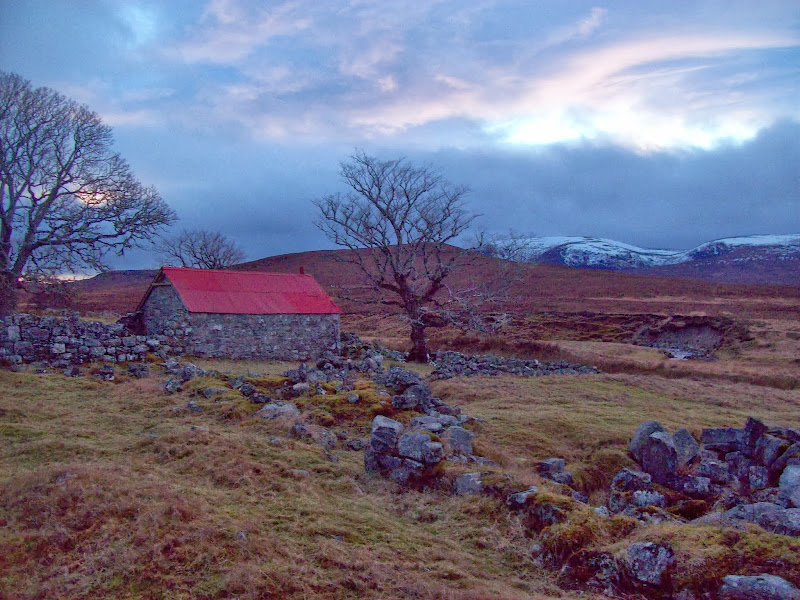 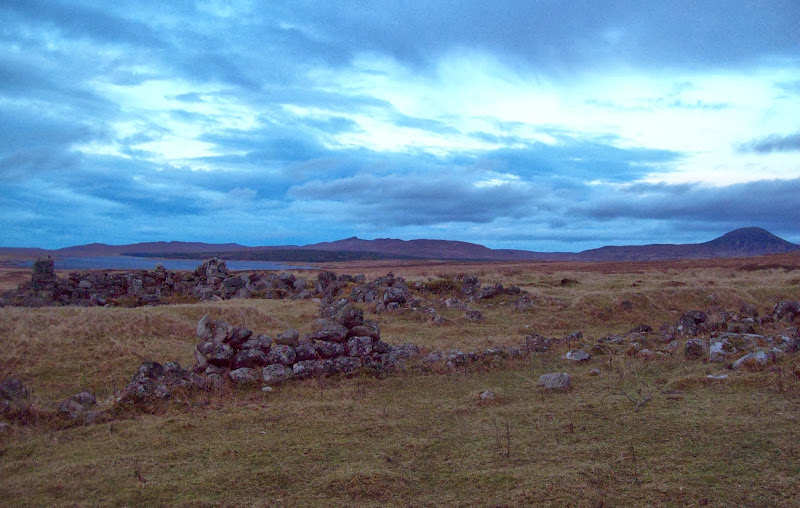 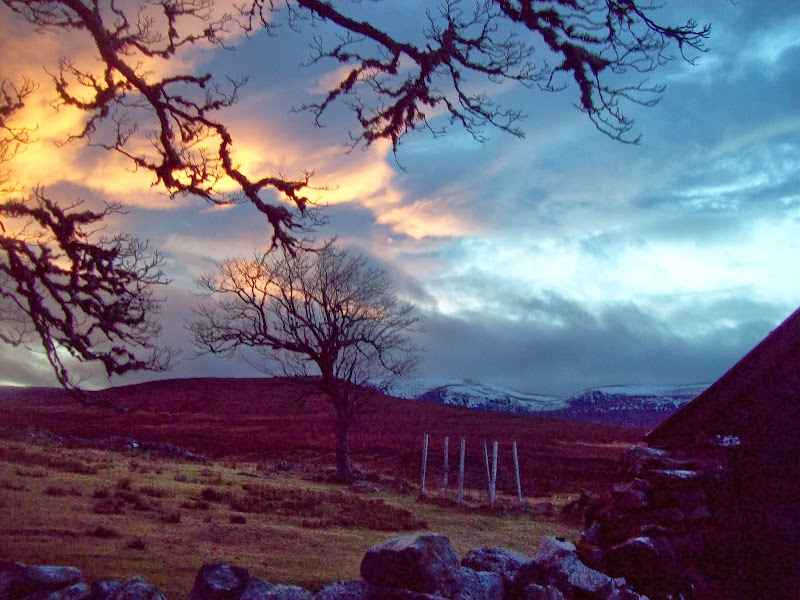 The wind had shifted round to the west a bit, so large parts of the cycle back were in a crosswind. Still much harder going than the way in though - took about hall an hour longer on the way back. The light was fading, but I didn't need a light on the track. Once on the road, it was so quiet that I didn't put a front light on either, switching on my head torch the one time a car passed me.

I realised that I'd been quite nervous about missing the last train home, something which had pushed me throughout the day. The consequence was that I had 40 minutes to kill in Kinbrace. It isn't exactly a party town - there isn't even a shop or pub. Luckily I had brought plenty of spare food and clothes with me, so it wasn't too bad. Certainly better than missing the train! 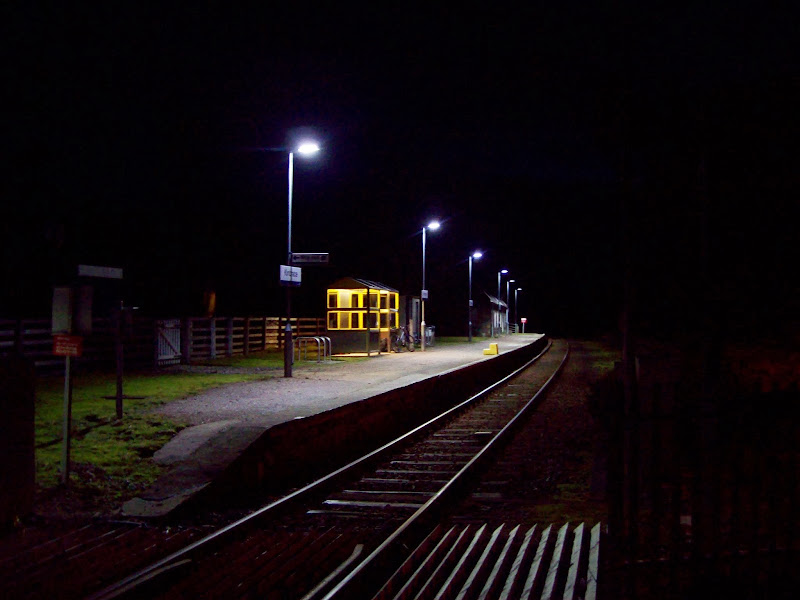 This wasn't quite as good as some of the cross-country, overnight plans I had envisaged for these hills (traversing to either Rogart or the Crask Inn), but it was a pretty good day out, way better than expected.

That's a pretty good start to the New Year, two rarely climbed Graham's . Love the sunrise photographs, definitely a route for the MB though, must get up to the far North again soon, pity about the bothy!

Some grand photos too , Kinbrace looks a match for Coire Odhair (Corrour)

Great report, that looked brilliant. Loved the photos of the bothy and the station in the dark.

A seriously big undertaking at this time of year.

I still have these to do and as I don't use a bike it will a long walk! I am thinking of going in from the Crask Inn and spending a night (or two) in the non MBA bothy at Loch Choire.

Great report!
I'm planning to use part of your route in my 2014 trip, so this report is very useful. I find the emptiness of this quarter rather appealing.
Thanks!

Interesting! Some fine views there. I remember the Griams on the horizon from my walk up Ben Stack last year.

Great report, inspiring pix. I'd never heard of these fellahs. Thanks for making me aware.
(I have one or two bike-walk expeditions in mind for 2014 also).

Nice one, i was eyeing these two up on the map when i was at Dornoch last year. I had them down as an epic, as i was plotting a route from the south but your route will do me just grand. Cheers

Grand day out there Malky and well done on the bike.

Great day out Malky. You are a relentless machine! Looks warm enough there for the shorts to be on was it?

We've been looking at doing these for a while now and my other half said, check if anyone has done a report. I said, I bet malky_c has .....and you have

Great report, lovely pics and looks like a wildly remote part of the country. Might take the camper up rather than the train as I'd be panicking about missing the return

foggieclimber wrote: I am thinking of going in from the Crask Inn and spending a night (or two) in the non MBA bothy at Loch Choire.

Is that the same one as I passed or is it right down by the loch? Might have to investigate this myself. I definitely want to look at the other side of Klibreck sometime.

HighlandSC wrote:Great day out Malky. You are a relentless machine! Looks warm enough there for the shorts to be on was it?

No shorts this time

. I've been pretty soft this winter.

heatheronthehills wrote:We've been looking at doing these for a while now and my other half said, check if anyone has done a report. I said, I bet malky_c has .....and you have

Only just! I'd definitely recommend having a bit of flexibility - it's pretty tight to do it between the first and last train (unless you live in Wick or Thurso).

Godamn Malky, this is a bit much for an opener to the new year....start as you mean to go on I see,

Lovely photos, great to see you're still getting after em