Me and Billy - An Socach

Me and Billy - An Socach

Anyway me a Billy decided on a wee pop across to Braemar, forecast was pish but heh, whats the worse that could happen ! Plus a chance to check the re-randed Yeti gaiters complete with a superglue.

The temptation to stop for a coffee at Corgarff Tea rooms was resisted, just !

Early away saw me on the up just before 0900hrs. En route in the weather was not bad at all, clear skies on the way over were beginning to gain a wee covering but then it was due in later. Gentle stroll the first bit, right turn and up but a path of sorts between the snow fields. But today the snow was hard and once at the first tall cairn halfway, crampons OOT, axe oot ! 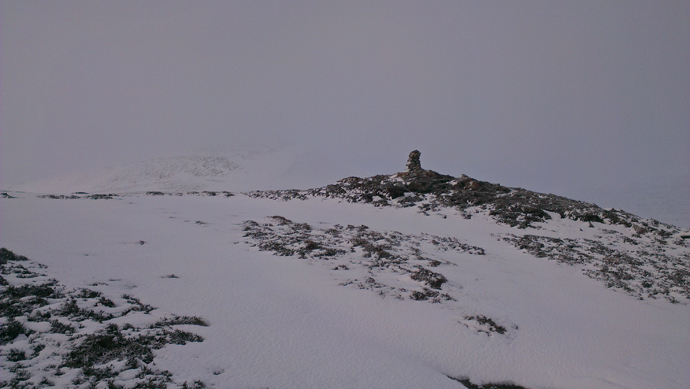 Swift coffee and a fag ! Wasn’t hungry at this point so decided to defer eats until a little further up (mistake !).

Suns oot for the ascent The climb up the flank to point 938 was not too steep and the firm snow made progress easy and confident with the cramps on, now supplemented by the mitts and balaclava. A gully on the right before the climb was what tempted the axe oot, although didn’t look to bad the end could have been a wet one, and I didn’t fancy that this early in the day.

So now with full winter garb, I looked the part, top attained and now in the clag, goggles etc. wind now increasing and stumbling. 3 waypoints to the summit on fairly level going but wind from the left was serious. Had worse but maybe not for such a continuous leg. Goggles continually needed clearing as did the GPS of ice. Key button on the GPS had to have the ice broken off to enable it to function through my mitt !

Waypoints at their usual accuracy (show off ! Sorry Billy) summit was reached.

The wind at this point was pretty severe, the forecast now upon me so I made swift work digging out enough of a hole in the snow filled wind shelter, so I could get at least some shelter for a spot of lunch and coffee (fag will have to wait

Houston we have a problem. Never encountered this before but then I don’t usually take lunch at the summits, at least not in winter and by now I was bloody peckish !

Rucksack frozen !! I couldn’t clear the zips of ice to reach my flask and the rucksack buckle was just a lump of ice. A quick shifty at the rest of me and jacket too was iced up, although I felt toasty !

GPS being is use was just as well too as the arm pocket in which it usually sleeps was also just a strip of ice.

So nothing for it but to get the flock out of here.

My flask is in there Selected reverse on the GPS, mitts back on and away, wind now from the right, so by the time I reached the drop off point I looked like something out of Scott in the Antartic. Descent back was not rushed as by now it was a whiteout at least until I hit some ice patches and could see enough of the ground to make out the terrain and more importantly the slope. After all these years its still unnerving, even when your fully aware of where you are etc, for everything visible, even with snow goggles to merge into one white mass !!

Eventually returned to the large cairn, passing the aforementioned gully on the left and now time for some grub, coffee and fag !!

The remainder of the descent was accompanied by a constant ice fall, the like of which you may experience on a cold frosty morning as it tinkles like glass off your car bonnet on route to work ! Well that was me the ice was falling off as I obviously reached warming temperature descending.

The view now appeared as did the river and the route back out !

Quick stop to remove some of the summit gear and away to the car. All in under 5 hrs, nae bad for an oldy !!

, it was welcome (wonder how much those two headtorches weigh ?)

did you not fancy getting off the hill quicker in the poor conditions by following the gully down to the track from the low point between the summit and the 938m top?

what gps do you use?

ps my friend had this to do for his 5th last Munro and actually phoned me "just to check he was at the summit " the weather was soo appalling .....his wife made him check so she never had to go back there ....ever!!

Doogz LOL at the wife !!

Was an option to cut away south to thr track at any point but given I had the waypoints loaded for the route up, kept to that. Frosted up the other side of me so I was done nicely all round LOL.

Extrex 10 I use. I dont upload routes. Just use the GPS Planner on here and mark out key points and also mark them on the map. That way I get to study the map too. Today I had 12 points to get to the summit.