Where are the children now in the glens of the Black Mount?

Where are the children now in the glens of the Black Mount?


Had circumstances been different we wouldn't have gone out on this day. We'd been out in the cold and the wet with no views climbing Sgiath Chuil the day before and after some big hill days earlier in the week I knew Moira would be ready for a rest day. But the forecast for the end of the week wasn't good and we had this brief window while my mother was in respite so I'm grateful to Moira for her willingness to go for it while we had the chance!

We left the car in the parking area 300m before the Victoria Bridge at the west end of Loch Tulla.

This looks promising - sunshine ahead We crossed the Abhainn Shira and took a left turn at Forest Lodge following a sign for 'Loch Etive by Glen Kinglass'. A group of about a dozen men were standing around in a rough circle almost blocking the way by Forest Lodge, and what struck me as strange was their complete lack of acknowledgement of our presence as we approached. I find it a rare thing to meet other walkers who don't give a friendly greeting as they pass - or more often stop for a chat - but it was like these guys were zoned out and hadn't the energy to even give eye contact. They'd maybe not had much sleep - but even so.

The track passes through an attractive stand of Scots Pine and to the west we could see the hills of Glen Etive with threatening dark cloud lurking over them. We hoped the cloud would stay there and allow us clear views from our first foray into the Black Mount.

The Black Mount gets its name from the Black Mount Forest and as the trees have disappeared is now associated with the treeless range lying to the west of the Rannoch Moor. I think back 50+ years to childhood holidays and being driven across Rannoch Moor thinking it was such a bleak desolate place before the awesome grandeur of Glencoe. But now I appreciate it for a beauty of its own which I didn't see as a child. At Clashgour the track passes a small hut, which once served as a schoolhouse to the children of the glen, and is now owned by Glasgow University Mountaineering Club. The Allt Toaig burn is about to intersect with the path at this point but instead of crossing it we took a right turn up towards Stob Gabhar and our goal for the day - Stob a' Choire Odhair which means 'the peak of the dun coloured corrie'. It wasn't difficult to sense this was once a populated area well able to provide children for the tiny schoolhouse. As we followed the Allt Toaig upstream the remnants of an old stone wall were clearly visible and you could almost see the children skipping their way along the glen to their school. On a day like this it's easy to imagine an idyllic way of life but it must have been hard going in the winter when food was short. Having a granny who at 5 years old walked several miles over rough moorland to school I feel we owe these people much respect! After crossing the Allt Caolain Duibh we took the stalker's path NE which climbs steeply at first then zig zags up the shoulder. Moira on the zigzags At the top of the zigzag section the gradient levels off and the path becomes less distinct over rocky ground and its a case of picking your own way to the summit.

Zoomed to the Crianlarich hills 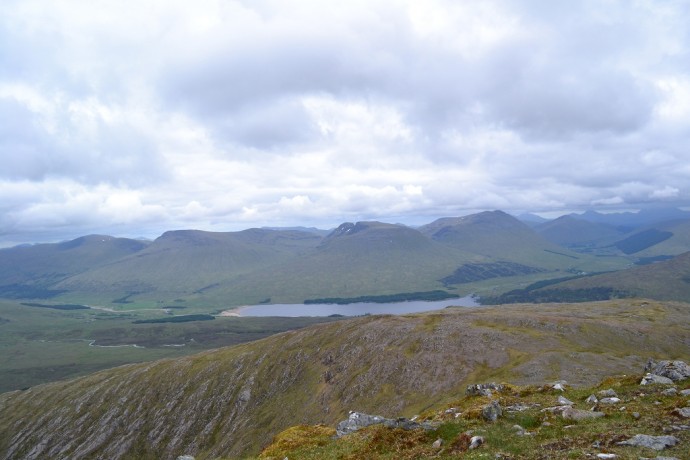 View NE over the watery expanse of the Rannoch Moor It was bitterly cold on top with a wind that tore through you and not conducive to stopping for a coffee or even to take the obligatory shots of each other. We got down out of there and didn't stop until we found shelter in the lee of some rocks to pack some calories in. The valley of the missing children The river they would have played in Maybe it was the old schoolhouse that did it but in all the walks I've done I've rarely had such a strong sense of the spirit of the people who once lived there. Another time I felt it was walking through the clearance villages of Boreraig and Suisnish on Skye, where a way of life was destroyed to make way for sheep. I've no idea if this area was 'cleared' in that way but something must have happened to empty a glen which once buzzed with life and the laughter of children.

Looking west up the Abhainn Shira to the Etive hills, a bit freer of cloud than they were in the morning We were back in Bridge of Orchy in good time and thought we'd be too early for food in the hotel but they were in business and a very nice meal it was too. Another great day in a part of the country less familiar to us - whetting our appetite for a return in 2014! Nice photos - and a poignant twist.

Been off line for a week so a bit surprised to see this one again. Lovely walk though.