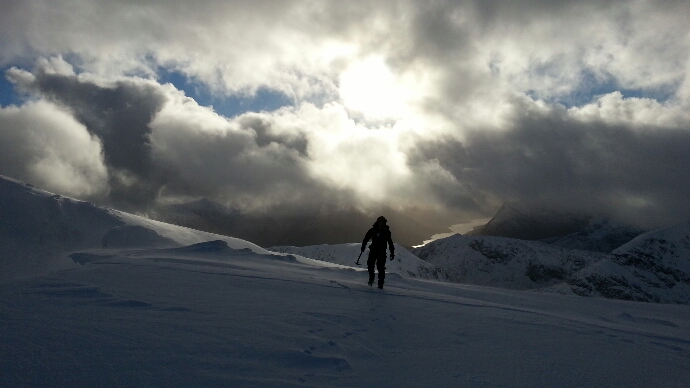 Walking towards bidean nam bian with glen etive in the background

Well after driving the 5 hours up to glencoe straight after work on a friday, we was hoping for a break in the weather to climb our objective bidean nam bian. On the news they said it was the best night to catch the northern lights, something we didnt see as we spent a chilly night in the car at the bottom of buachaille etive mor (not a bad place to spend the night i might add)

In the morning we drove down into glencoe and parked next to loch achtriochtan. As we arrived the weather greeted us with howling winds and driving rain and sleet. But within a quarter of an hour it had cleared and we had patches of blue sky. We took the path up towards coire nam beith slowly making our way up into the snowline. We put our crampons on and got our axes out and headed up towards bealach an t-sron, climbing up at times 70 degree snow/ice. We then headed up towards the summit of stob coire nam beith and by this time the views were spectacular. We then headed accross the ridge towards bidean nam bian with stunning views down into glen etive accross to loch leven and the aonach eagach. We then dropped down into coire gabhail as the weather turned bad again and back down into glencoe. Spectacular day spectacular view which made the 5 hour drive there and back and sleep in the car worthwhile