With the weather in Aberdeenshire looking quite nice again, we decided on another local Sub-2000 after a stroll up Cairn-mon-earn the previous day. We arrived at the lay-by just past the Raemoir Hotel entrance at 8:50am and once we were suited and booted, we set off up the driveway at 9am. It was freezing cold, -6C, as we walked along the track to the hotel driveway. Turning left, we walked past the Raemoir Hotel, tempted to walk in as we could smell Bacon and Eggs from the kitchen. We took a left turn at a track near the overflow carpark and reached a gate with a sign informing walkers to remain on paths and that firearms are used in the area. A quick read of the information sign informed us of the different variety of animals and birds in the area. We followed the path up the hill until we reached a wooden hut. The path curved to the right and we followed it all the way along until we reached the open moorland. There has been strong winds in this area recently and lots of trees are down and are blocking the path. The path kept climbing and winding its way along as the views kept improving. In the distance we could see cloud rolling in, so picked up the pace a bit just incase. We were heading west now towards the summit of the Hill of Fare. As we headed along the path, the cloud started to roll in, but luckily there was no rain and it seemed to disappear just as quickly as it appeared. After about 10 minutes, the low cloud had disappeared and a wooden hut appeared. We stopped at the hut and checked our map and decided to head on to the summit of Hill of Fare before returning for some food and then carrying on along the path that turned right at the hut and forms the circular route. 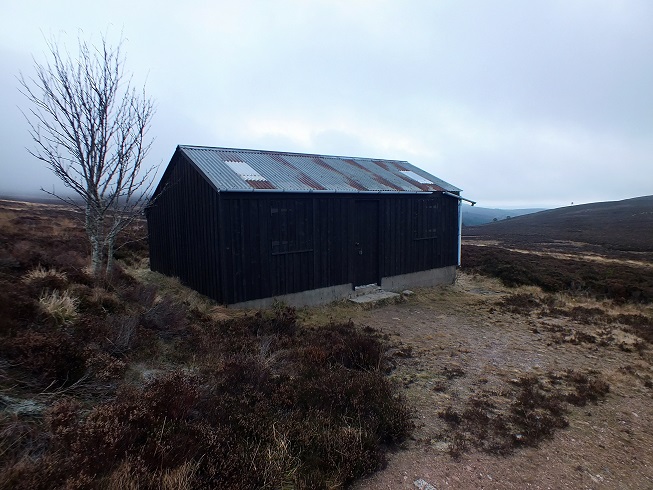 We walked for about 1.5kms along the path trying to see if we could spot the hidden summit cairn, but there were lots of frozen lochans around and it was boggy underfoot, so we couldn't cross to where we thought it was, so headed back to the hut where we sat down on the step and had a bite to eat whilst admiring the view. After lunch, we took the path that joins from the right and set off for out return down to the Raemoir Hotel. It was breezy along this section and it took ages to warm up after our break. This part of the walk is long and uninspiring, although you do get glimpses of Bennachie and Aberdeen City from here, but we were chatting away and before we knew it we came met up with a couple of blokes and their dog who were standing at our turn-off. We said hi and then set off downhill. We found a ruined house just below the path and tried to imagine what it must have been like living here in the past. This section of the walk was the most interesting because there were many trees down due to the recent winds and we had to either jump over them, climb under them, or find a way around them. After a kilometre we finally reached the bottom and set off along a very nice 4x4 track. Following the track through a pine plantation, we eventually reached a left turn where we found an old quarry (well thats what we think it was) that was now full of water. We wandered over to have a look and take some photos. Across from that, there was a farm, so we stopped here for another bite to eat. We headed back down the track and came to a gate. We walked through it and reached Raemoir Home Farm. There is supposed to be a path back to the hotel here, but we were too busy looking at the cows in their shed that we must have walked past it and ended up walking down their driveway and reached the B977. We walked along the grass verge back towards where our car was parked. This was the worst part of the walk as we were very close to oncoming traffic. Lots of cars either slowed down or gave us a wide bearth, but there was many idiots driving BMW's, Audi's and sports cars who thought it would be funny to wizz past us quite close at 60mph.

Even though it was only 3/4 of a mile, it was quite scary. We reached the driveway to the hotel and decided to head back up it and make our way to the original track we started on. We arrived back at the car just after 2pm and then headed to Raemoir Garden Centre for a coffee and cake to celebrate reaching double figures for the Sub-2000 category before making the short drive back to Aberdeen.

Never heard of this hill but I do like the look of it.

I like doing the Sub 2000's but sometimes get frustrated with the short walks in that most of them seem to have - this looks a better distance to stretch the legs.

Gordie12 wrote:Never heard of this hill but I do like the look of it.

I like doing the Sub 2000's but sometimes get frustrated with the short walks in that most of them seem to have - this looks a better distance to stretch the legs.

Have you been up Cairn-mon-earn just over in Durris? If not, you should try this route we did, 13km all up.

Thought I knew of the place ~ much medieval shennanigans....