Out on my own again

, taking advantage of a brief lull in the recent crap weather to get the traditional Christmas Detox walk done - but with none of my usual walking cronies available, I thought some lower hills a bit nearer to Glasgow might be in order. I'd done the southernmost two of the Luss Grahams last March, and fancied doing more of them. The two in Glen Douglas looked a nice horseshoe that should be do-able in a short day.

our_route.gpx Open full screen  NB: Walkhighlands is not responsible for the accuracy of gpx files in users posts
The minor road up Glen Douglas on the left of the A82 just after Inverbeg has a wee sign at the bottom warning "Road Liable to Icing" -

they aren't kidding! At around 7:30 a.m. on an early January morning, it was just a 2-mile ice rink, and a dog-sled with team of huskies might have been more appropriate than my wee crappy city car

- I took it slowly and got there eventually though, thankfully without mishap.
Although it's possible to park up at Tullich Farm or the holiday cottage at Invergroin, there is a new designated car park for walkers just a bit to the east of this, and it would have been a bit churlish not to use it. 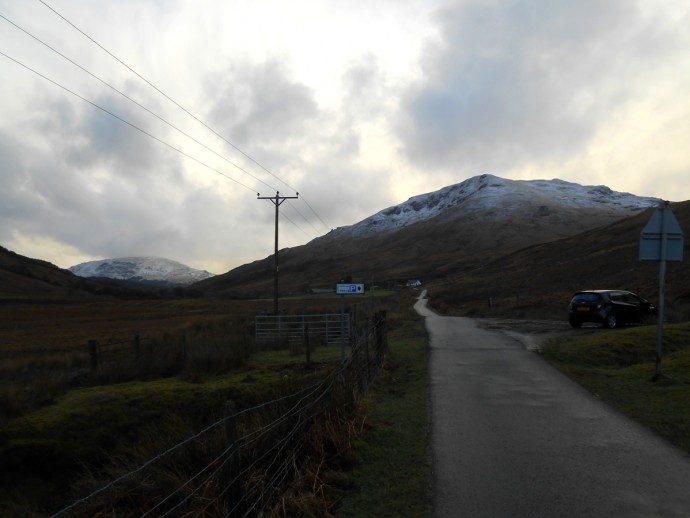 Immediately west of the car park, a gate across a wee burn gives access up to the left (west) around the bottom edge of a big chunk of forestry. However, it also gives access to a wide and tempting forest ride

... the walk round the forestry would be a bit of a detour, while the ride - if it kept going right to the top - was heading directly towards the summit of Beinn Bhreac. Well, I really should have learned my lesson by now: handy-looking forest rides and firebreaks more often than not just fizzle out once they've got you well and truly stuck in the middle of the trees. And this one was no exception: it ended in a big clearing just over halfway up to the forest edge. At least there was a nice view south-west to Doune Hill for consolation. I did consider back-tracking, which would almost certainly have been quicker, though less fun. However, a wee stream at the top right edge of the clearing looked as though it could offer a way up through the Christmas trees. Needless to say, the temptation of yet more completely gratuitous forestry was just too strong... Hacking up through the trees (fairly young spruce forest, with lots of low branches handily placed for a bit of potential eye-gouging

) did prove to be rather good fun, but it was hard work and slowed me down a lot. Probably not so bright on a short January day, in retrospect.
Eventually, though, I did get to the top edge of the forest, and onto the open hill. From here, Doune Hill was looking surprisingly impressive. In fact, at this time of year, it looked like nothing so much as a humungous Plum Duff, artfully dusted with icing sugar... I was a bit knackered after the forestry, and it felt like a long trudge up Beinn Bhreac's knobbly slopes, but there were nice views over west to the equally knobbly Tullich Hill for distraction, with the Cobbler keeking out over its right shoulder: Grand sweeping views down over the western half of Glen Douglas too. Scenic as it looks, there are a number of mysterious military installations in this area: there might be more in that big Plum Duff than raisins, so to speak... The sun was out now, and it didn't look too much further to the top. Loch Long soon came into view too: these two hills occupy a commanding position between the north ends of both Loch Lomond and Loch Long, and in clear weather they have commanding views down both. Beinn Bhreac's summit is a truly grand viewpoint, with impressive views up and down Loch Lomond. As a wee bonus, it is currently sporting a pole with a bit of tartan ribbon; very patriotic - what all the more fashionable Trig Points will be wearing this season, perhaps? Although it's possible to take a curving route down westwards from Beinn Bhreac to reach the bealach between Ben Reoch and Tullich Hill and then tackle the second Graham from there, it's probably simplest just to carry on from Beinn Bhreac to the summit of Ben Reoch, which makes a more natural horseshoe and gives better going. It's longer than it looks across to Ben Reoch, but there are grand views of the Arrochar Alps en route, with the Brack, the Cobbler and Beinn Narnain prominent in the foreground. More good views up to the north end of Loch Lomond, too. 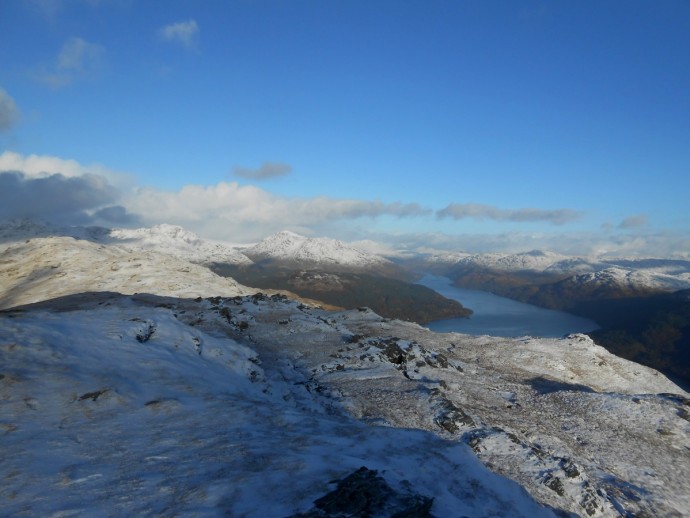 Although Ben Reoch isn't a Graham (it doesn't have the necessary 150 metres of descent and re-ascent between it and Beinn Bhreac), it does have a fairly sizeable summit cairn. The best views are probably back south to Beinn Bhreac, with the island-studded southern end of Loch Lomond in the background. As I left the summit, the weather started to turn a bit, with flurries of snow, but there was a wee rainbow for consolation. The bealach between Ben Reoch and Tullich Hill felt depressingly low, and the eastern side of the second Graham was looking a tad craggy and intimidating. There are probably several reasonable ways up, but I chose to cut up just to the right (north) of the line of crags to the north of its craggy east ridge. The snow started to fall again at this point, but eventually I made it up past the crags and was able to cut up to the left (south) to reach Tullich Hill's summit environs. Tullich Hill is one of those hills with a big, flat-but-knobbly summit plateau, with several high points competing for the summit. I visited several of them before I located the true summit, marked with a fairly big cairn. The best views were down Loch Long to the south-west, with Garelochhead and its military installations looking like Rivendell in the slanting late-afternoon sunlight. (Not a frequently made comparison I realise, but there you go The walk back down from Tullich Hill to Tullich Farm was a delight: a good path soon emerged down its south-east ridge, with Loch Lomond and its islands in the foreground all the way. Thankfully it was a quick descent, aided by a bit of bum-sliding (inadvertent initially, but then just for the fun of it

), and I got back to the car with plenty of daylight left.
They're a good winter round, these two - best left for a clear day, given those views of the two lochs

Nice route/report. Hopefully will do something similar soon but maybe without a crawl through the plantation!

Really like the look of thee two Graham's. As you say, keep for a good day as the views look brilliant.

Maybe I got a bit carried away there, right enough

These two look like the pick of the bunch for views over Arrochar. Long way away for me - just need to abandon my wife in Glasgow for some shopping sometime to justify the distance

Great wee local hills for me these, yet they remain the only 2 of the 8 in the area that I've only done once. Will need to rectify that if there's a weather window anytime soon. Cheers for the reminder