I left Creiff High Street walking along the A85, at a good pace, for just under 1.5km to Dalvreck where I turned off the main road and headed up the road past the distillery. After approximately 1km I then took the left fork in the road, signposted for the dam, following the River Turret for 5km to the Loch Turret Dam. It had been raining for the best part of the night but the rain had stopped for the moment making it quite a pleasant walk to the Dam.

The river Turret was flowing pretty strongly just below the road and I imagined that the Loch would be pretty full in view of the volume of rain that had fallen over the past few months,

After just over 1 hour I was at the Dam. The front of Loch Turret Dam is particularly pleasant to look at with the pumping house and a large grassy slope with a large run off channel down the South West face feeding overflow water directly into the river.

The regular route from the Dam to Auchnafree Hill is to continue on the good track up the East side of the Dam for 3km or so and then continue on a track doubling back on itself West across the hillside for a further 1km then break North to the summit of the hill.

However, I decided I was going to go across country for this walk and with that in mind I set off directly up the pathless heather covered slope heading just slightly West of North for 1.5km to skirt around the top of Creag Chaisean. There is a path heading along the ridge which I stumbled upon but it was full of soft snow and it was easier (only just mind) to walk on the tufted heather along the side of the path. The path veers North West to skirt the large cairn at the summit of Choinneachain Hill and at this point I left the path and headed directly North, descending to and crossing the huge Peat hag field between the two hills.

This set of Peat Hags was particularly difficult to cross due to the valleys between the hags being filled with varying degrees of hard and soft snow and the water and mud beneath made for an interesting, muddy and wet crossing. However, with dogged perseverance I was across the hags and heading upwards to Auchnafree hill summit.

It had rained off and on during the trip so far and my intention to stop at Auchnafree summit for refreshments was scuppered by the strong cold wind so refreshment would have to wait for now.

I continue North West descending and ascending to A'Chairidh crossing the second snow filled Peat Hag field of the day then onwards down and over the Moine Bheag and the third Peat Hag field crossing was made. I was looking for my route of ascent up to the beallach North East of ben Chonzie and realised that instead of heading up over the steep crags of Biorach a Mheannain, it looked easy enough to head up the headwall directly below the beallach.

From the beallach the route was all in snow. Strength sapping soft snow at first but as I ascended the snow got harder and harder eventually turning to ice. I was pretty knackered at this point and a small weather front blew in causing a temporary whiteout. I arrived at the ice frozen summit and didn’t bother to stop. I continued past the summit and on for a further 600m or so following the fence line, continuing to follow the fence line as it turns through 90 degrees heading South West across the snow.

It was then pretty much a 7km cross country walk over Meall na Seide, Carn Chois and breaking off down to the path on the West side of the Loch below Beinn Liath and back to the Loch Turret Dam. This looks like an ideal route for a small ski tour.

It’s now only an 8km walk out on good roads.

A surprisingly tough walk due to the conditions which would be a breeze on a hot summers day.

Loch Turret round.gpx Open full screen  NB: Walkhighlands is not responsible for the accuracy of gpx files in users posts 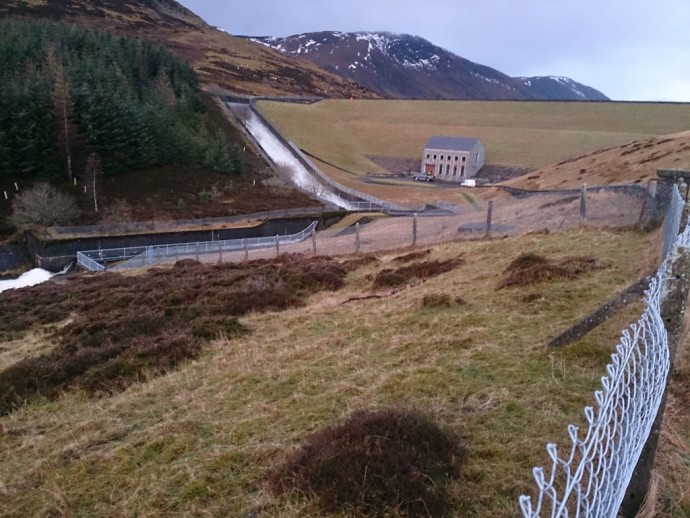 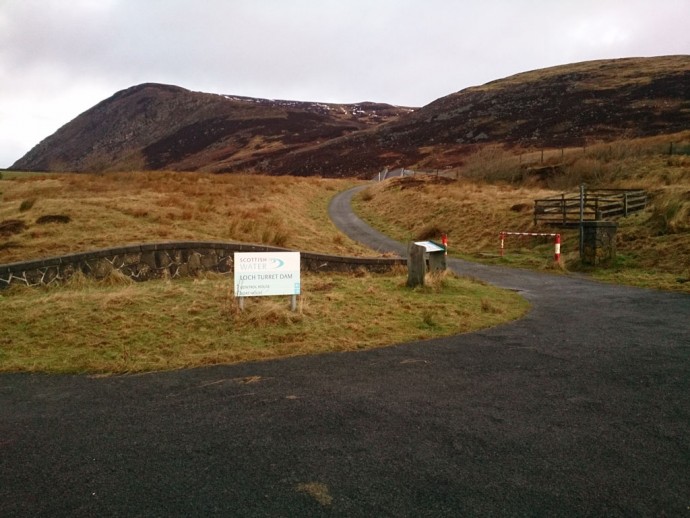 My route into the hills 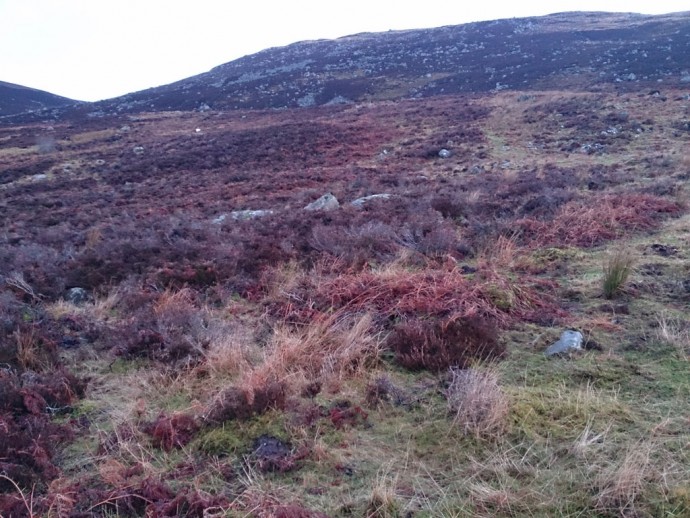 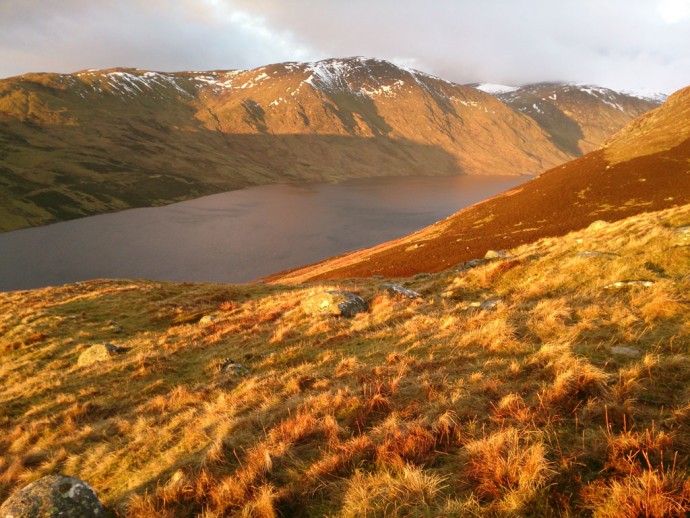 View over Loch Turret from 600m 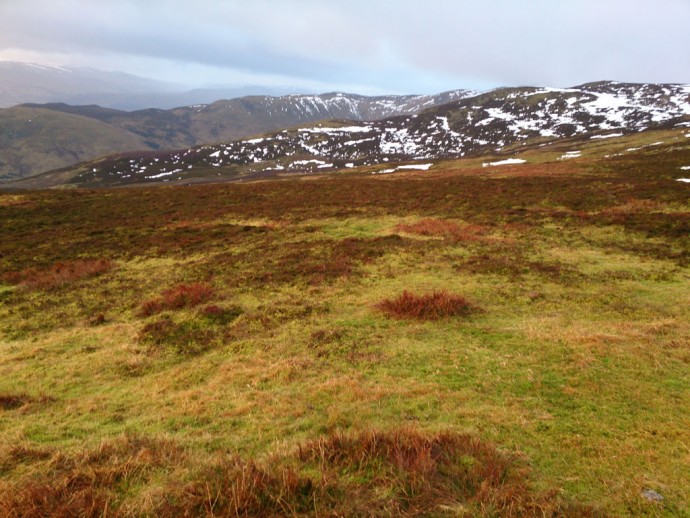 snow appearing as I ascend 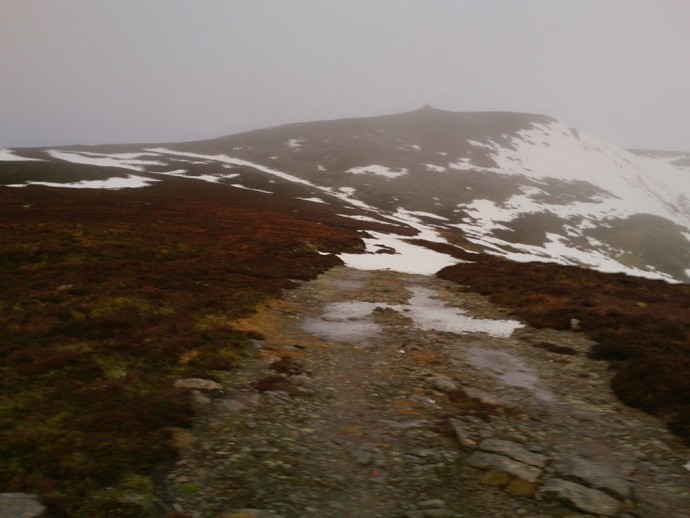 The first cairn on Choinneachan Hill 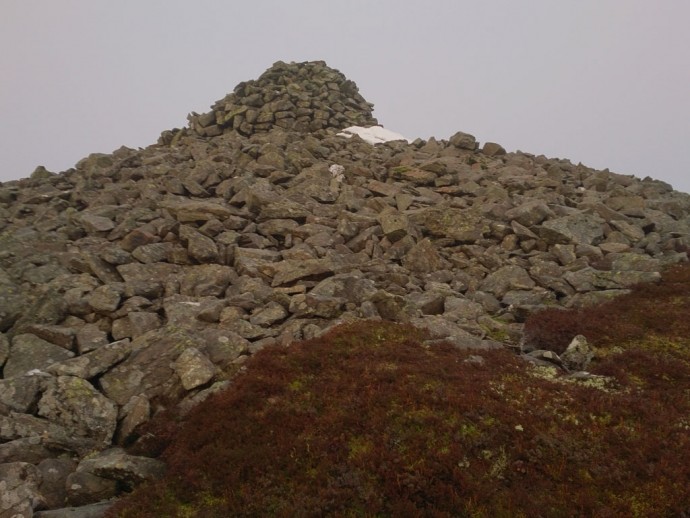 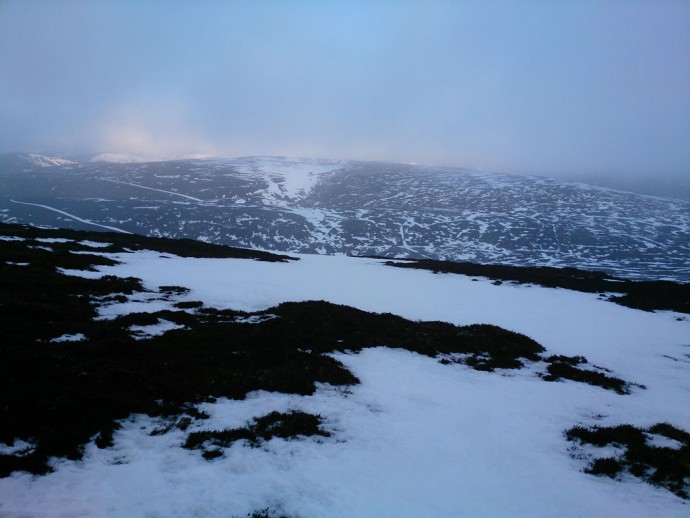 Gloomy with soft snow and large peat hag field ahead 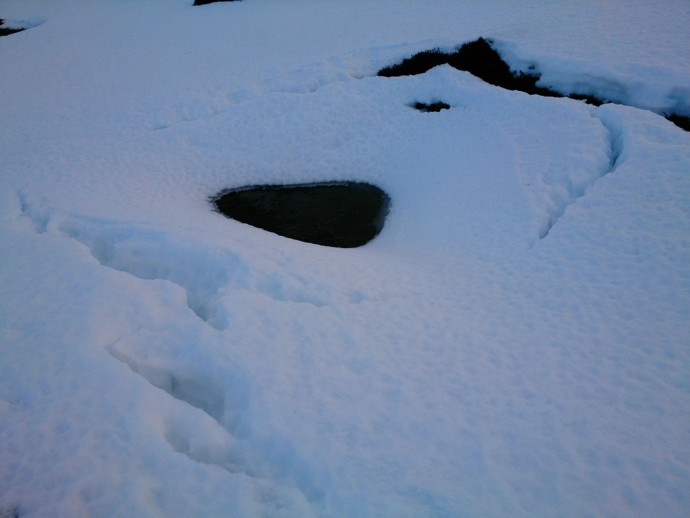 Lots of water under the snow sometimes visible 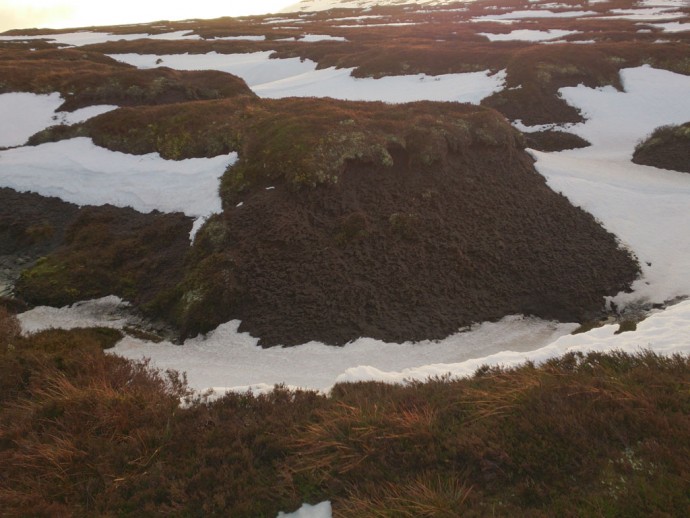 Large peat hags with hidden water under the snow 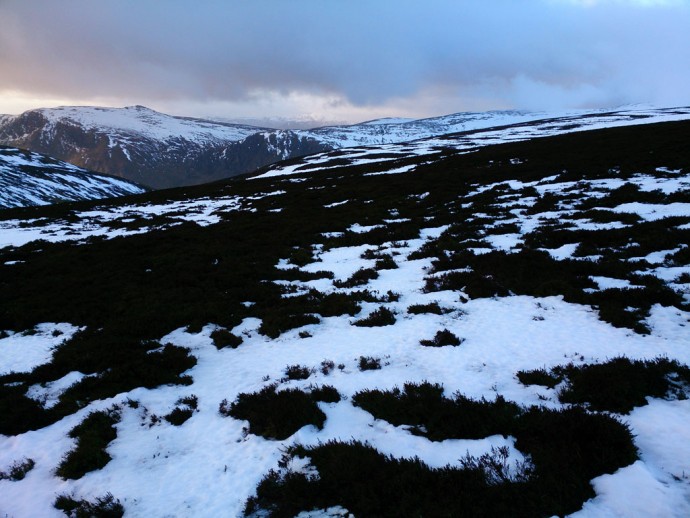 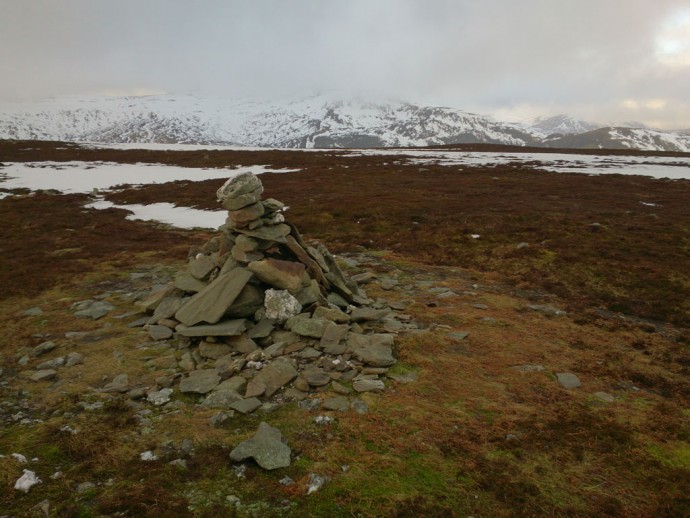 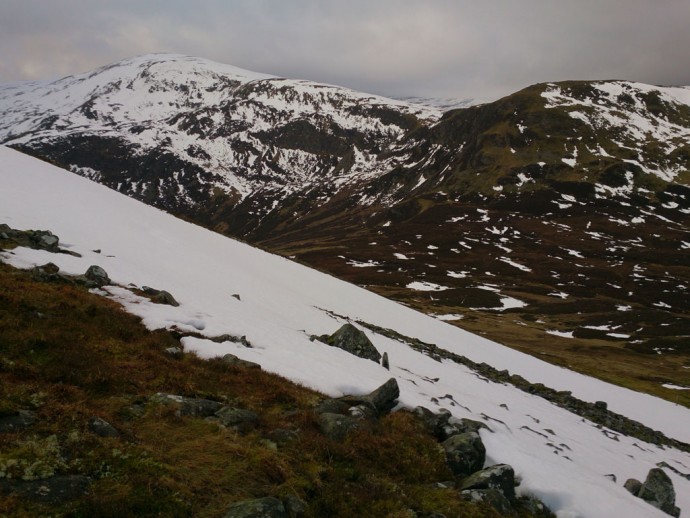 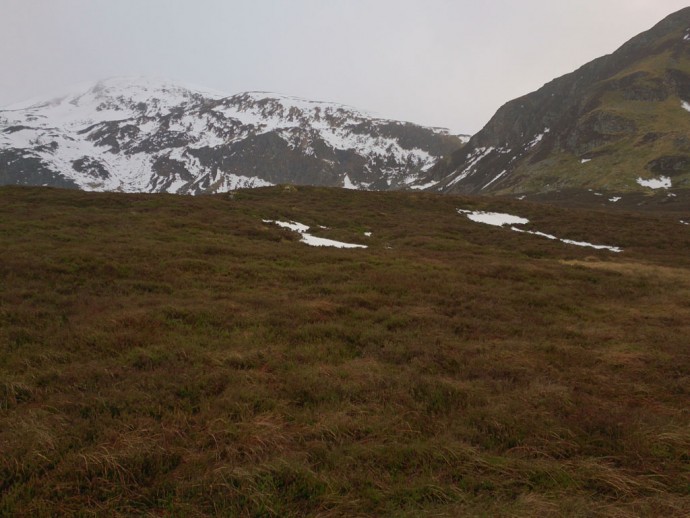 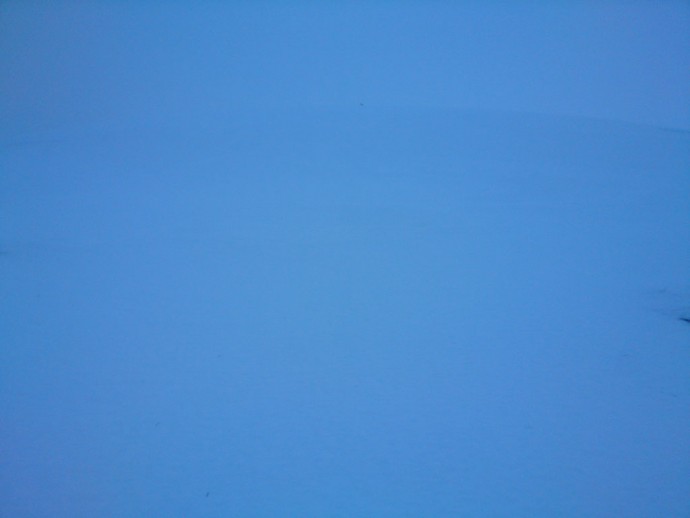 Near whiteout on Ben chonzie View back towards Ben Chonzie 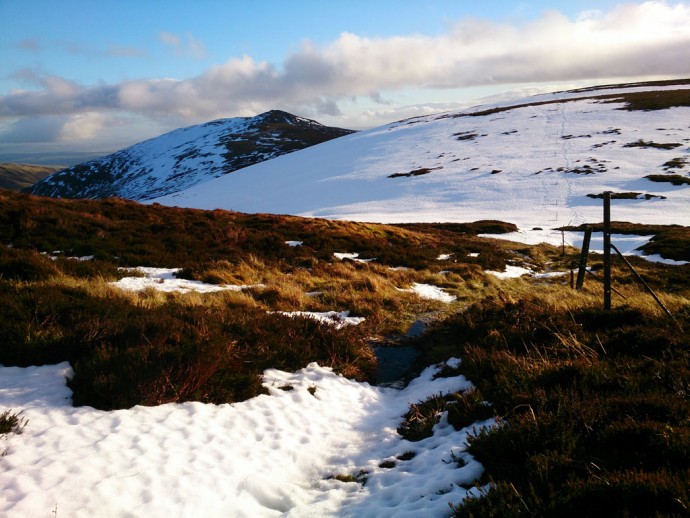 The Loch and dam come back into view Getting closer to the dam Water cascading over the dam wall Let me be the first to welcome you to WH and say for a first TR its none to shabby.

Thanks for posting Montyagain! Exactly the route I fancy doing sometime, having done Auchnafree Hill recently. That's a good day walking from Crieff and hitting that soft snow

Good to have you back and to see some new routes from you!

Ahhhhh! Ben Chonzie! Did you know it's my spiritual home? Nice to see you appreciating what it has to offer!

great report for a newbie....well done
....have you tried introducing yourself in the hello forum?

C'mon, where's your report for Knock of Crieff?

. Couple of really nice photos in there

Good to see you back!

Ah the wandering minstrel has returned

.....were you walking backwards or hopping ?

That is quite a walk starting and finishing in Crieff. Looks a good circuit though, I do enjoy Loch Turret.