On Friday my friends, Paul and Allan, and I decided to visit the Lake District for the weekend. We arrived at Shap Hotel, the cheapest accommodation I could book online last-minute, to find that it was situated in a field miles from anywhere. The drives to and from the hotel in the evenings were atmospheric, they had an 'American Werewolf in London' feel to them. 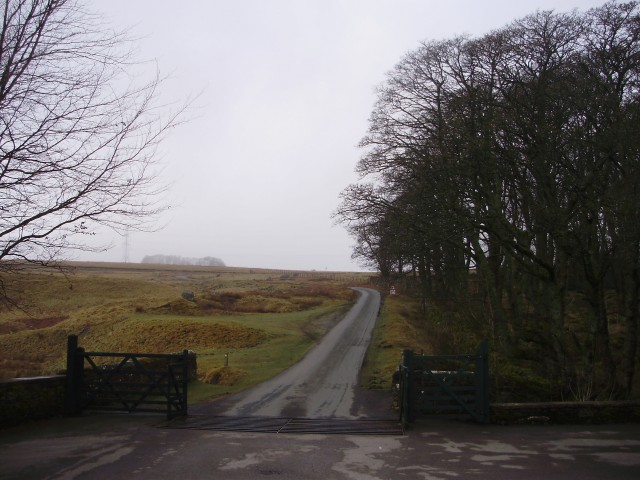 On Saturday morning the weather wasn't looking too great, so we decided to jump in the car and go exploring instead. Paul suitably knocked the back of his car reversing into a rock on Hardknock Pass (looks a bit like Scotland in the photo don't you think). 'Do you fancy visiting Sellafield nuclear power station?' Allan suggested.
'Might as well,' we replied. We were having one of those days where we felt we as though we could cram in just about anything. We arrived at the visitor centre two hours later, 10 minutes after it had closed.
'Great, it's shut!' I exclaimed, looking around for signs of two headed lambs in the neighbouring fields. 'It just dawned on me as we were driving here in the car,' I went on, 'that you are aff your heid if you think visiting a nuclear power station is a good day out. And us two, well we're just as daft for going along with you in the first place.'
Allan was subsequently banned from making any further where to go next decisions, so thankfully, we never made to the pencil museum in Keswick either.

I didn't take any photos at Sellafield due to security driving past us, the only three standing in the car park, at slow speed.

Next stop was the Cumbrian coast. Didn't bother with the usual sea and seagull photos (and was really annoyed I had forgotten my 'how to make hand shadows' book). Me aka Walk Aboot

We stopped off often to e.g. admire the newborn lambs and other such-like signs of Spring. The zoom on my camera is rubbish but there are lambs in this field...honest

I'm not sure what Paul was looking at exactly but, erm, you can take the man out of Glasgow but you can't take Glasgow out of...you know the rest. Back at Ambleside, at the end of a perfect sunshine afternoon, we mused over the walks we would have enjoyed if we had had the sense to bring our walking boots with us in the car for the weather clearing. 'Shame we didn't manage that one we passed in Coniston.' Paul said, as he leaned over to grab another bit of nan bread to mop up the sauce on his plate in the Indian restaurant.

On Sunday morning we parked the car at Threlkeld and asked a landlady, who was outside her pub sweeping the night before cigarette ends from the pavement, where we might find a shop to buy our packed lunches. 'Keswick, five miles away' she said. We couldn't be bothered getting back into the car. Thus Paul and Allan's hill walking provisions consisted of glass bottles of water and dry roasted peanuts, and I settled for a bottle of fruit shoot and a mars bar muffin (well they didn't have any scampi fries left) that probably had a sell-by date of 2050 or thereabouts. Thankfully Blencathra didn't take as long to hike as we had expected, so I never had to actually taste it.

There were no views at all on the top of Blencathra, and only a teeny wenny bit of snow left, but it was still a really good, enjoyable walk - would definitely recommend it, would go back a few times The Last of the Snow Plenty of other times glenrothes

Nice report, it has thawed out there,i went a few weeks ago when the white stuff was falling.

We do have some good surprises in store when it comes to walking in England.

That was the object of the weekend really...

Our friend Paul was put off a few years ago when he went up Skiddaw on a too busy day and was horrified to see a bunch of folk enjoying a barbeque on the summit. We decided to spend a day just driving around this weekend so he could get a sense of what else the Lake District has to offer. I'm pleased to report, job done

...Ah but we did (that's why we missed the Sellafield visitor centre's opening times)

walk aboot wrote:That was the object of the weekend really...

Our friend Paul was put off a few years ago when he went up Skiddaw on a too busy day and was horrified to see a bunch of folk enjoying a barbeque on the summit.

What?!? How could he be horrified by that? I would be impressed - sounds like a great idea!

Paul Webster wrote:But you drove all that way round to the SW end of the Lakes and didn't go for a pint at Wasdale Head

I wouldn't buy a pint there - way too expensive!! Another fun report Walkaboot! I see there's no chance of me sledging down the back of 'Cathra again this year now with that little fragment of snow left...

...Better chance of having a barbeque on the summit of Skiddaw MC

You need a barbecue on Skiddaw to keep warm! That's probably the coldest fell top in the Lakes!