Finally some decent looking weather on he horizon, but the in-laws were up to stay. We had agreed to head out to the Storehouse of Fowlis for a Sunday breakfast. I went up in a separate car, planning to leave and head down to the Cairngorms at a reasonable time. On the way over, the weather was looking much better than expected further west, so I changed plans to go somewhere that didn't involve driving back past the house.

As I hadn't packed the relevant map, I stopped off in Beauly to pick up a new one, before heading on down to Glen Cannich. Beinn a Bh'ach Ard looked great on the way past, and I wondered if I should have picked that. But I fancied something a little higher, where there was a chance of some consolidation and views into more remote areas. Carn nan Gobhar (and possibly Sgurr na Lapaich) it was then

. If the cloud was down on the Mullardoch summits, I planned to turn around and go back to Sgurr na Diollad.

Mullardoch.gpx Open full screen  NB: Walkhighlands is not responsible for the accuracy of gpx files in users posts
Loch Mullardoch was looking good, although I didn't start walking until 1pm. I followed the shore path for a short while, cutting north up heathery slopes when it started to get rubbish. 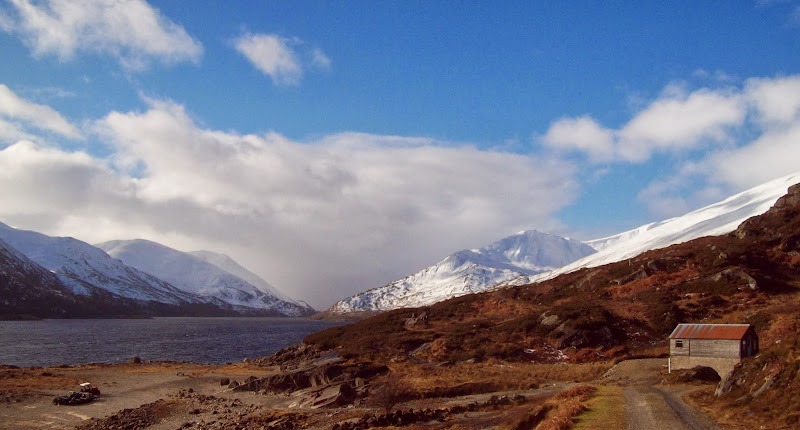 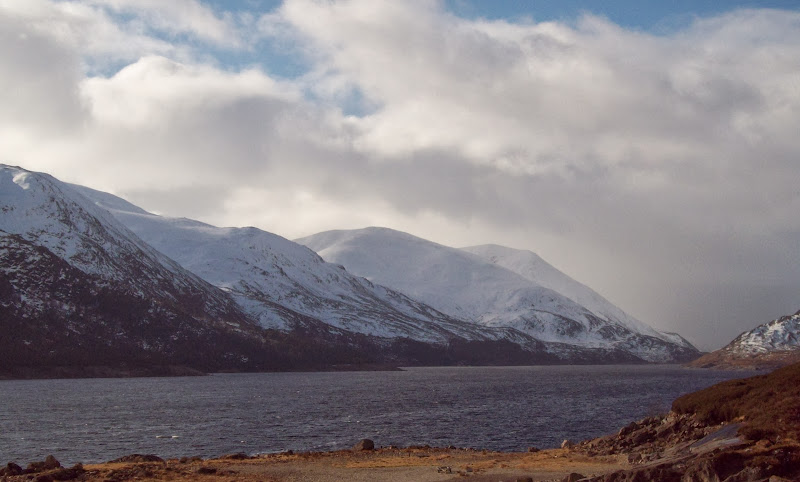 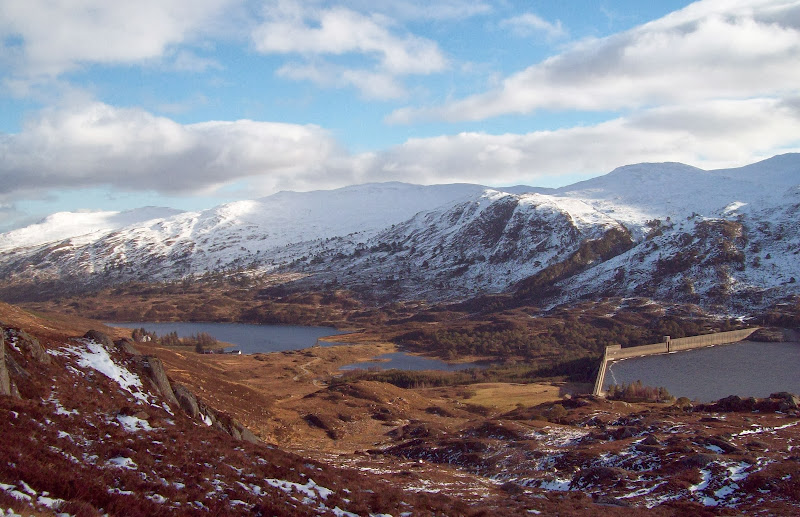 The western side of Creag Feusag had most of the snow scoured off it, and some interesting scrambly diversions. Away from the snow, the rock was nice and dry. Higher up, I had to walk through the snow a bit, which was unconsolidated and tedious. Fortunately once at the top of the steep climb, it hardened up a bit. There was never much consistency with the snow all day though - sometimes going from ankle deep powder to icy slither in a couple of steps. 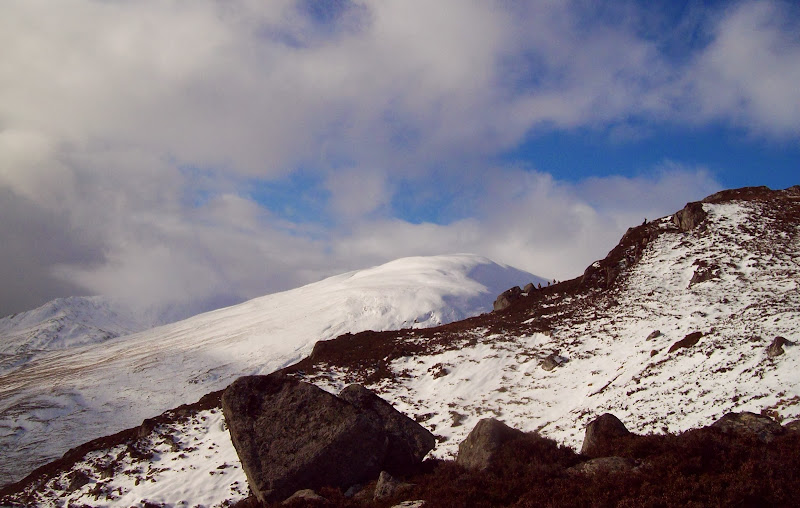 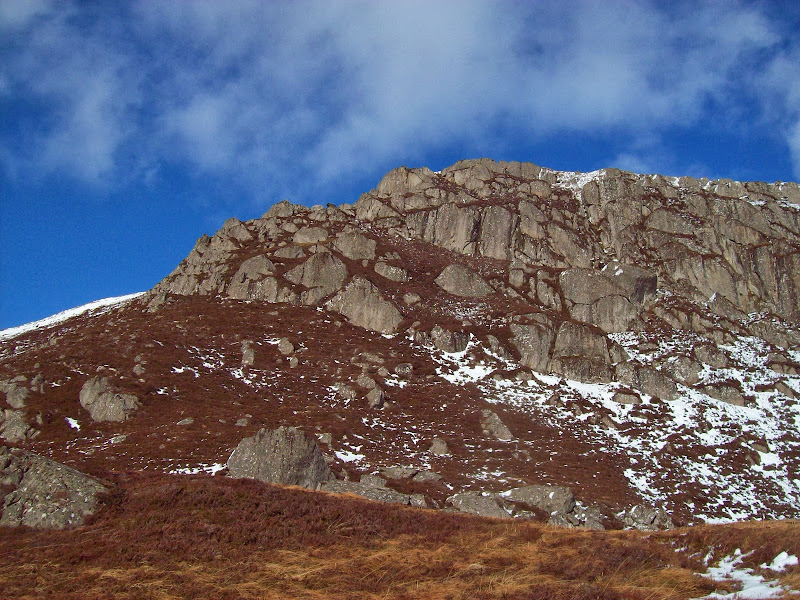 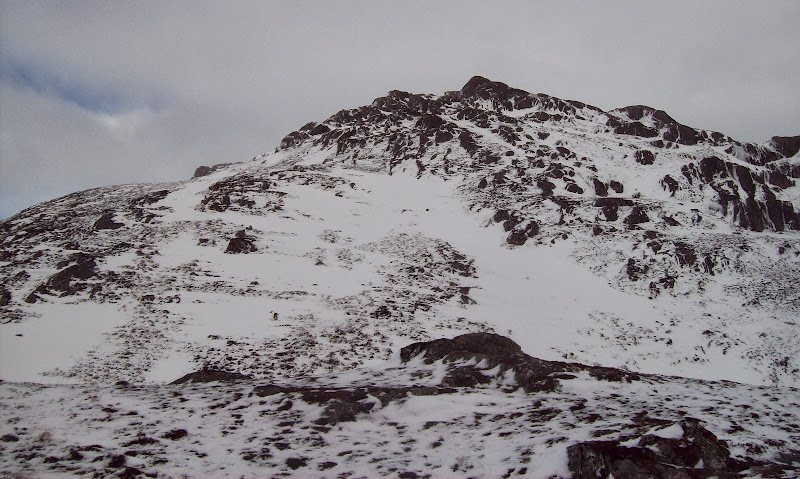 Sgurr na Lapaich was prominent early on, poking out from behind Carn nan Gobhar. I doubted I'd make it up Sgurr na Lapaich, but at least I'd get good views right onto its impressive east face later on. The cloud moved in on the hills south of Loch Mullardoch early on and didn't really clear away until right at the end of the day. 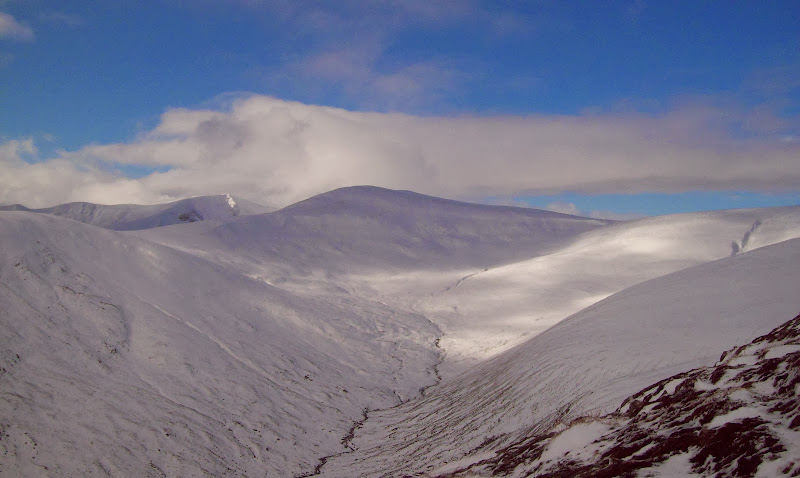 Back down to Loch Mullardoch: 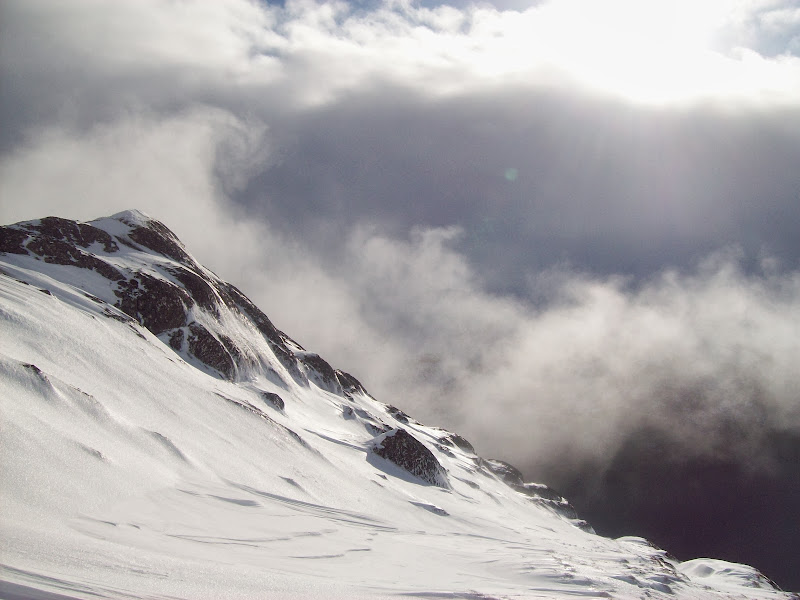 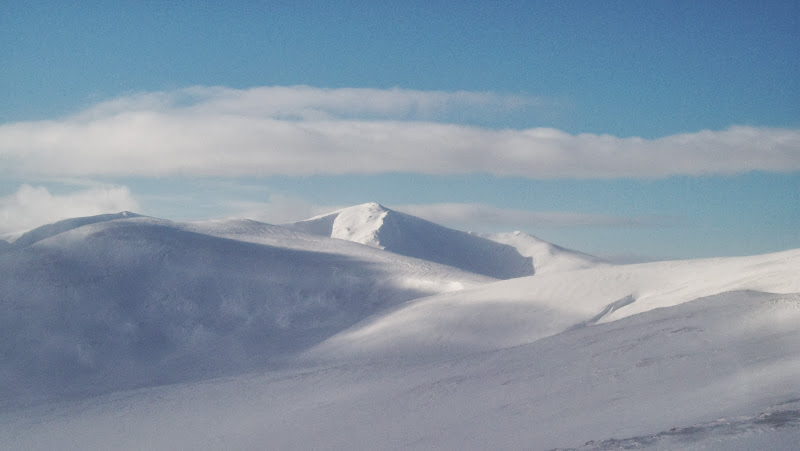 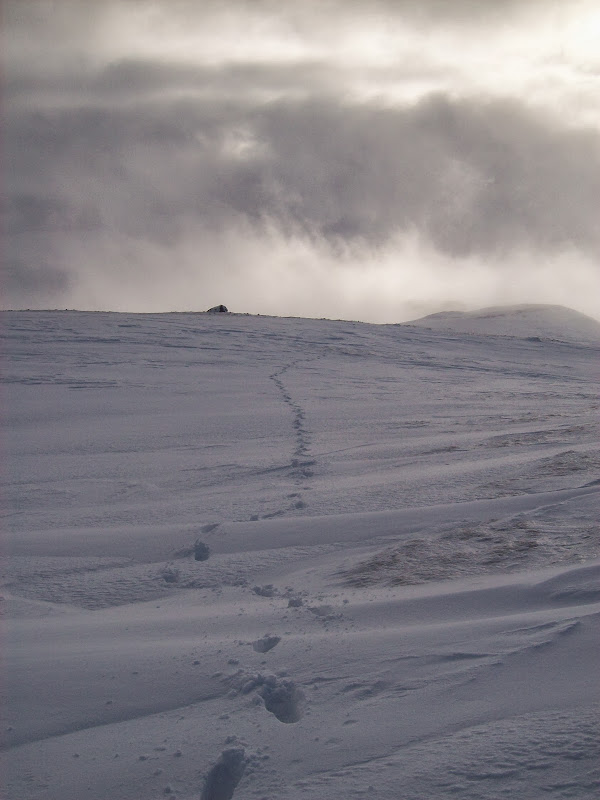 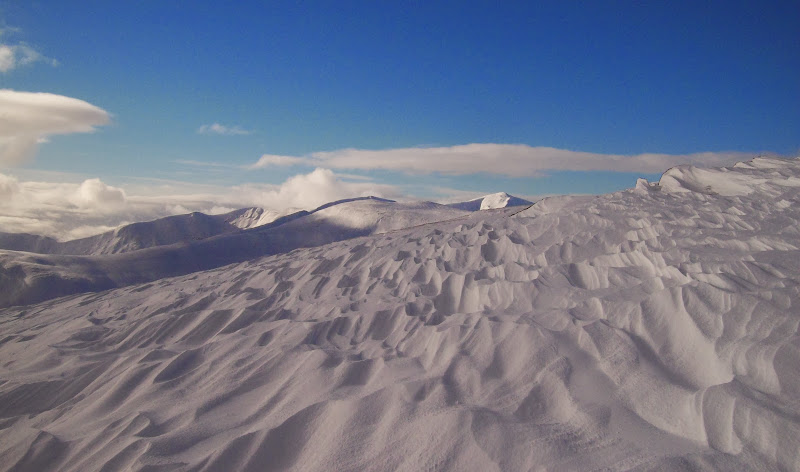 Once on the summit of Creag Feusag, there were great views down Glen Strathfarrar and Loch Monar. Maoile Lunndaidh was prominent, and in the tangle of hills behind, I could pick out Beinn Eighe and Sgurr nan Clach Geala. 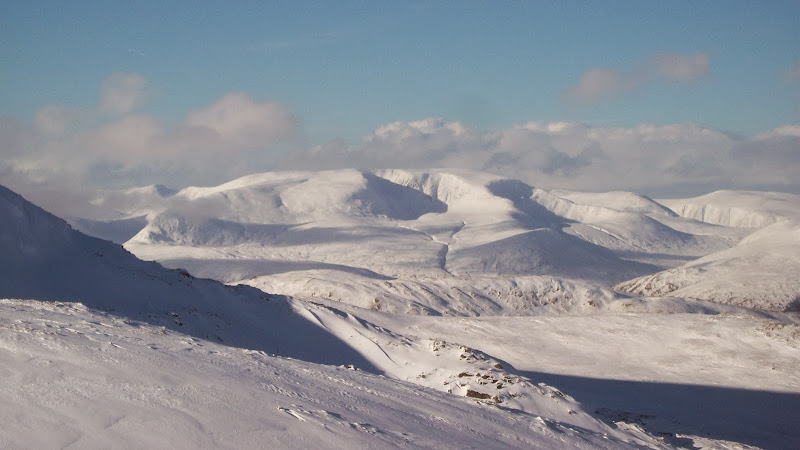 There was some tedious deep powder on the ascent of Creag Dubh, but I was rewarded with more great views from the top (plus another Munro Top I'd missed previously). Even the more rounded hills like Carn nan Gobhar seemed to have impressive curling cornices in places. 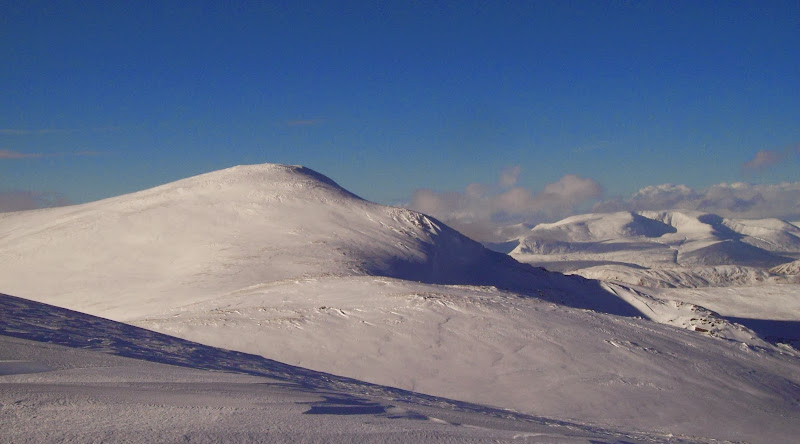 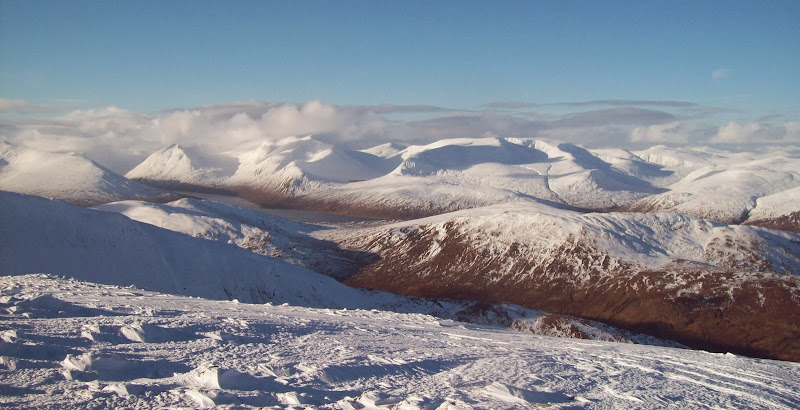 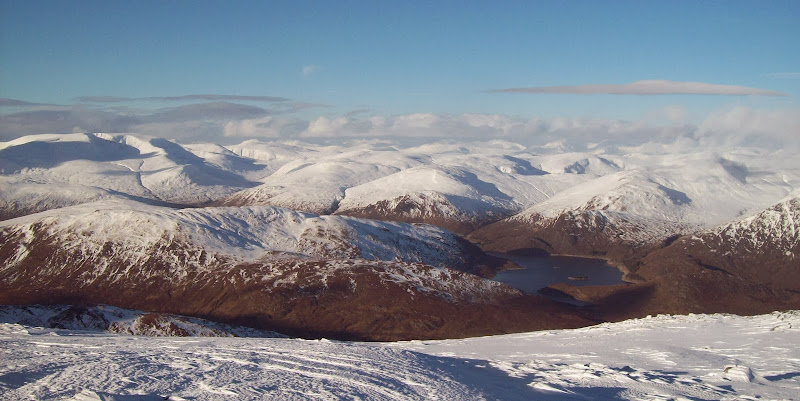 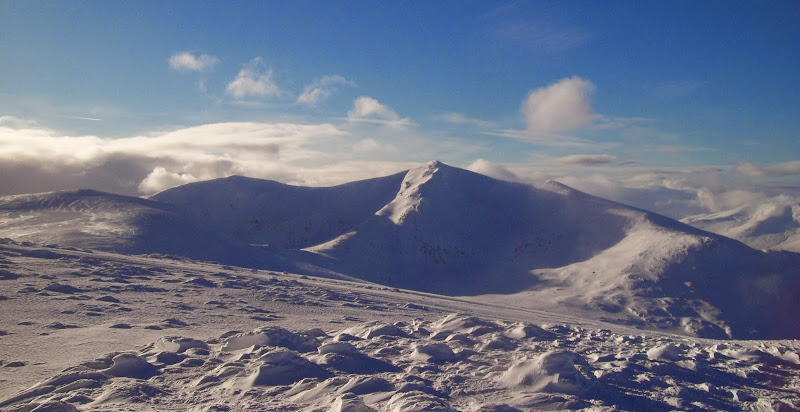 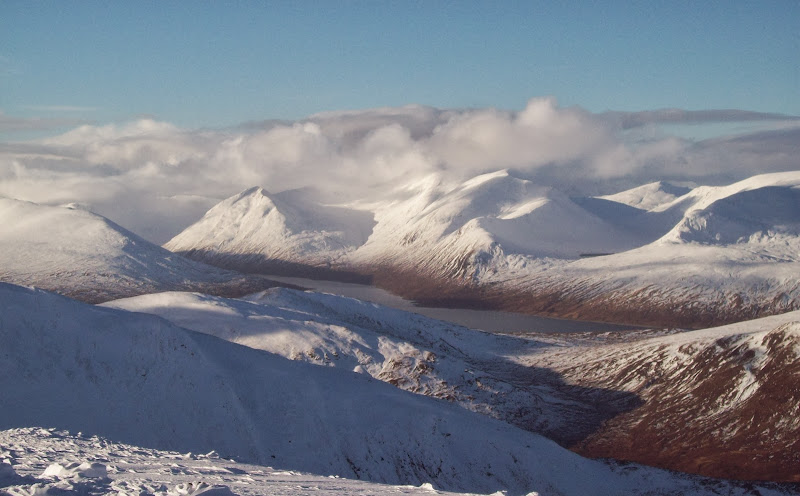 South to the Affric hills: 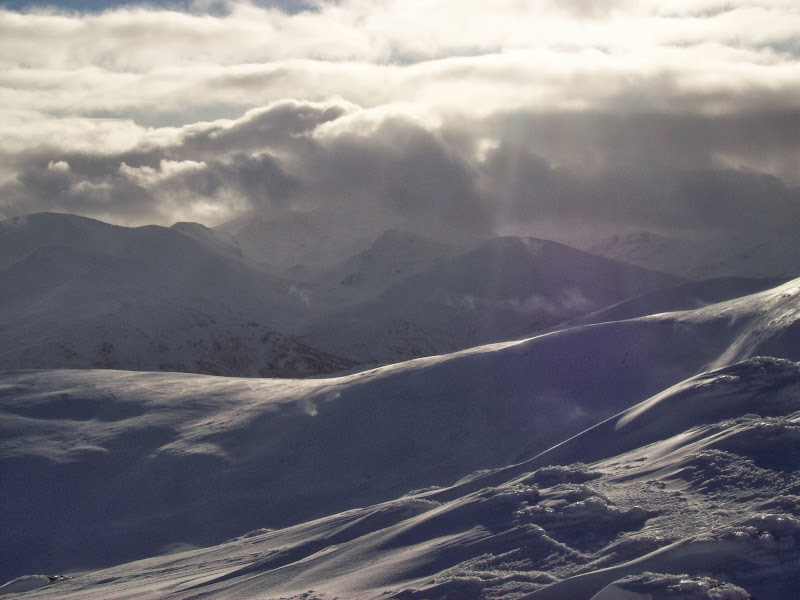 Much easier going terrain over to Carn nan Gobhar, and the views onto Sgurr na Lapaich were worth it. Still lots of cloud to the south, so it was difficult to fully contemplate the complete Loch Mullardoch round, something that has been on my mind for 7 or 8 years now. And here I'd used most of my energy up getting to the easiest, least interesting summit in the round! Still, it was all relative - with a face full of Sgurr na Lapaich I was far from dissatisifed 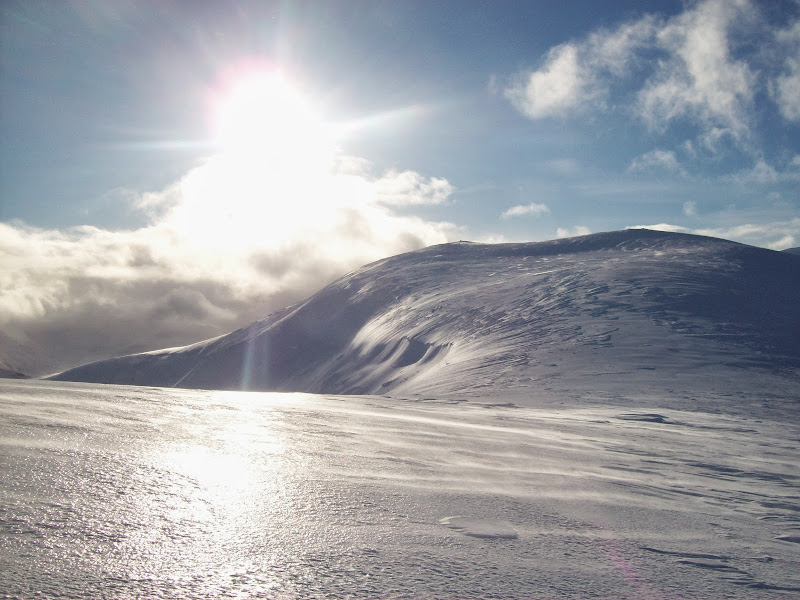 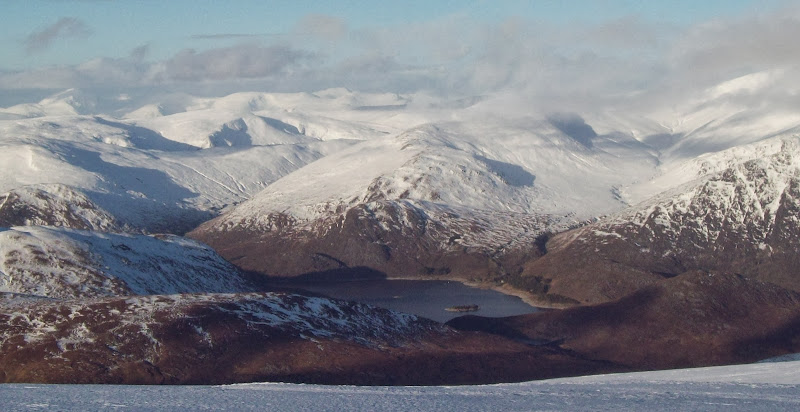 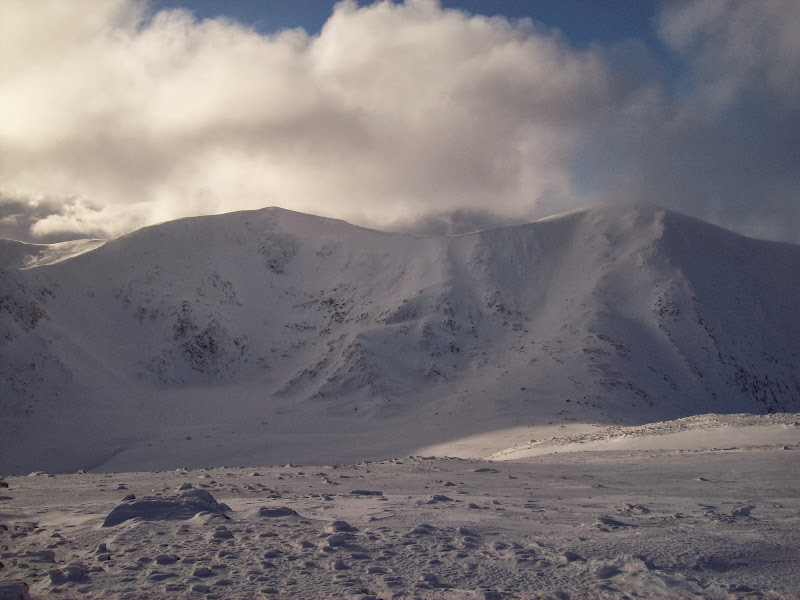 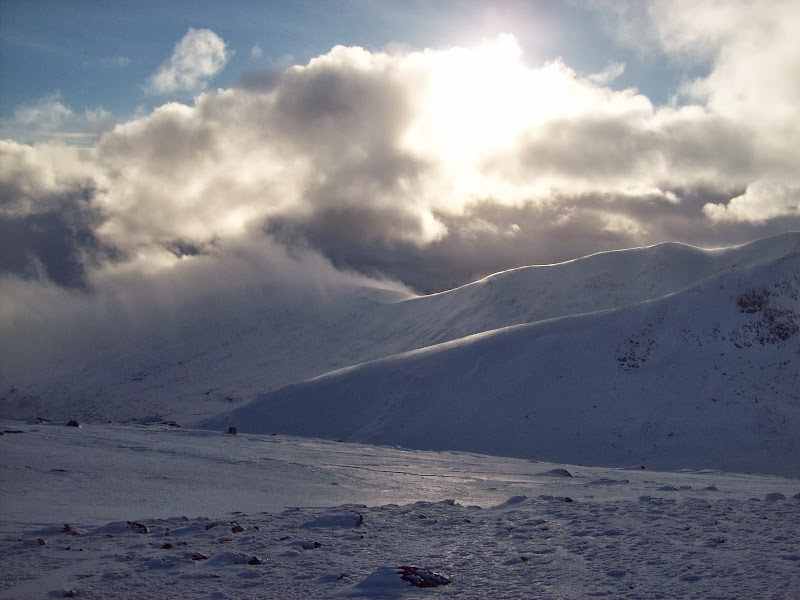 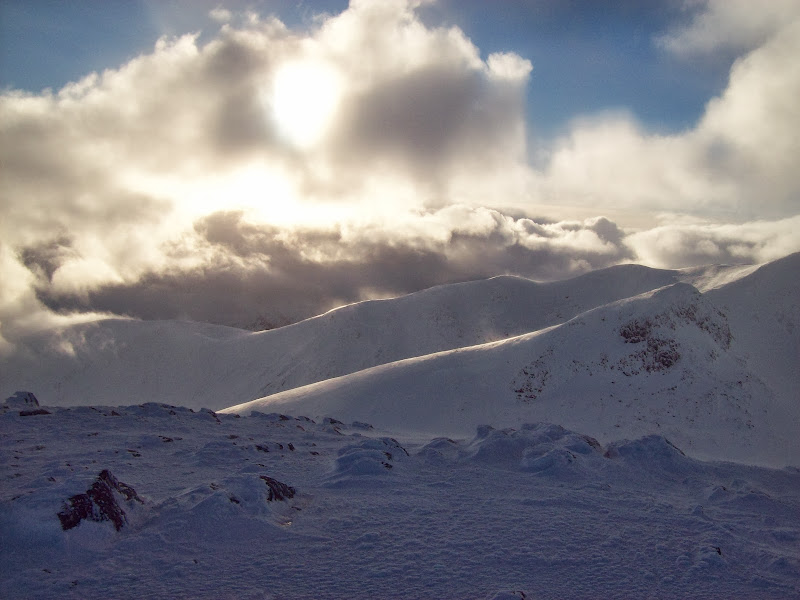 from the summit of Carn nan Gobhar: 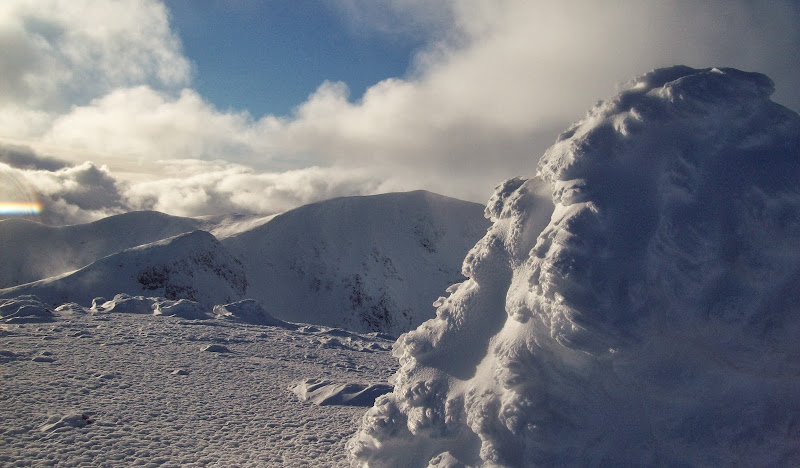 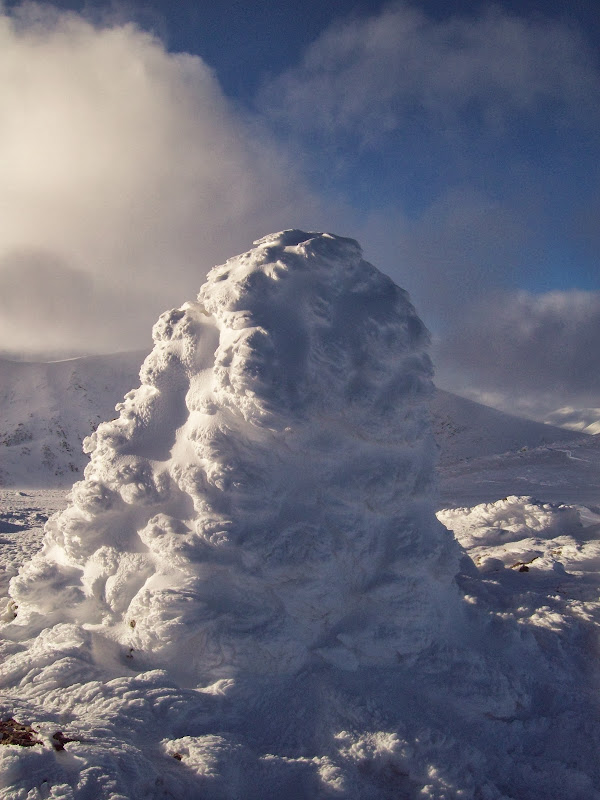 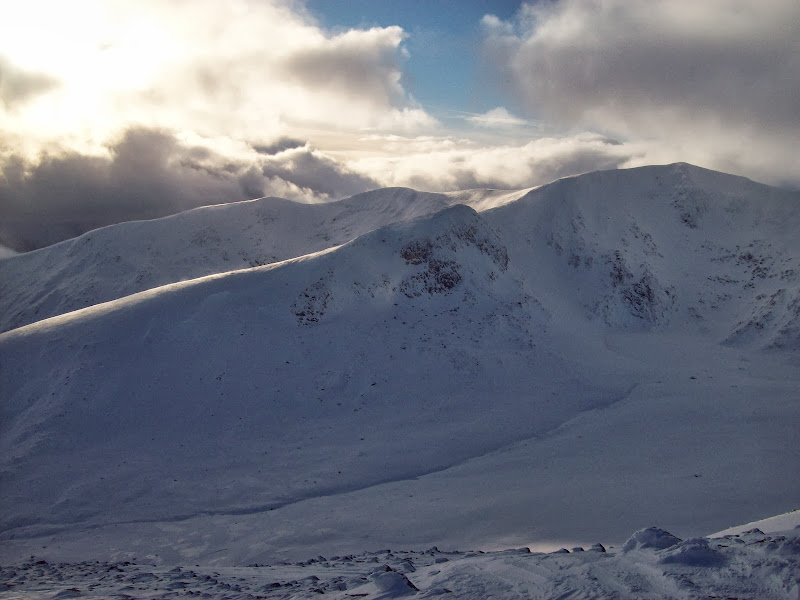 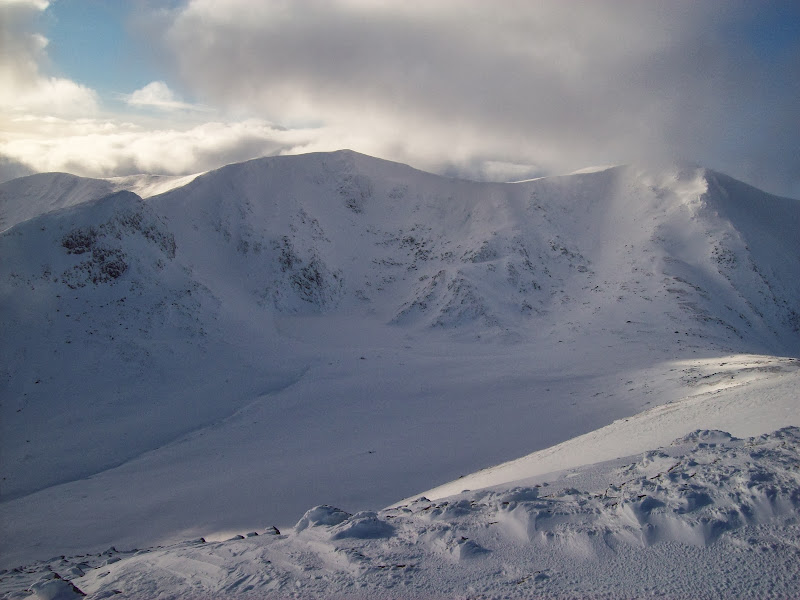 I had started at least two hours late to include Sgurr na Lapaich, so it was time to head south. The first part of the descent from Carn nan Gobhar was a little steeper than the other summits, and I thought I might need to dig out the axe and crampons. But no, the spiky nature of the ground made it straightforward to descend. I looked back for some last views into the impressive corrie before floundering over softer snow to Mullach na Maoile.

The snow on the nose of Mullach na Maoile was horrendous - knee deep and mainly soft, but with a thin icy crust. I managed to bumslide down some of it, but it wasn't fast. It had the cuffs of my trousers up and the crust was ripping into my ankles above my boots. Gaiters are mostly a pointless hillwalking fashion accessory but I wouldn't have minded a pair on this bit!

Finally down, and the cruddy lochside path was a pleasure in comparison to the snow. I had my first decent break looking at the last light down the loch, where the cloud had cleared off the southern hills again. The Affric hills always impress me from this side - such a long chain of massive looking mountains. 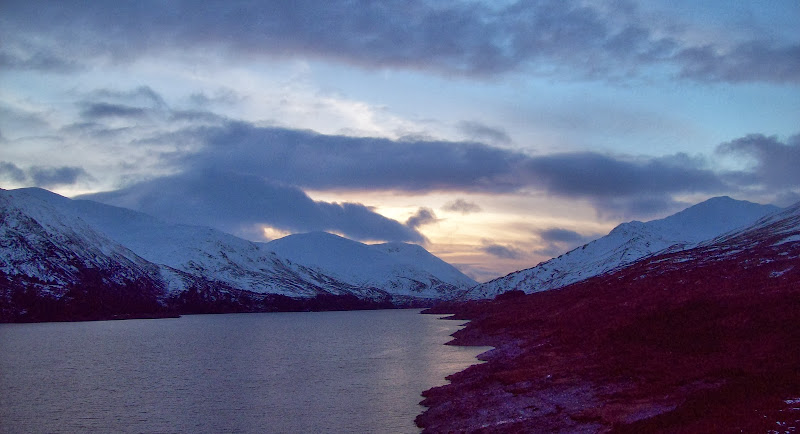 Then into the car and home. I had washed the car for the first time in about a year the day before, and succeeded in getting it even dirtier than it was before in just 24 hours. I'll not bother doing that again

First properly sunny and wintery day on the hills this year - worth the wait! Saw more wildlife than usual too, including an eagle, some white hares, and a couple of badgers shuffling off the road just above Cannich.

Absolutely stunning Malky, a good round on a winter afternoon too specially with all the snow trudging - that can get really tedious really fast

Wow!! Absolutely stunning. We couldn't decide which hill to do yesterday...had thought about going up Wyvis in he afternoon and coming off in moonlight, but as we were packing we could see cloud engulfing it. We ended up just going for a walk up Cnoc udais and Cnoc beinn na Lice and could see the stunning conditions all around, Affric, Fannichs, Beinn dearg etc...all clear of cloud and draped in snow. Even Ben Wyvis had shrugged off the cloud and we were kicking ourselves that we didn't just do it. Still, we had a great wee walk and enjoyed the views. Looks like you had the stunning conditions we had hoped for

We ran out of time to summit our hill, but didn't matter at all.. Magical weekend

You were lucky with clear sky. We were not far south of you - Ciste Dhubh - and got no summit views due to cloud and snow. But managed to catch enough sunshine on lower slopes and when traversing Am Bathach.

Snow conditions were tricky yesterday, plenty of very soft, sticky snow, knee-deep or even deeper in places. On the col between CD and AB we almost swam in the white stuff. We had gaiters, but still ended up with snow squeezing into our boots somehow

Ciste Dhubh ridge was one big overhang, we had to walk on the steep western side to avoid a disaster... Risky stuff, but I must admit, one of the best adventures in my life

Looked a great day Malky,tough going in the deep snow at times though,i packed in on the Ochils at the weekend

so well done on getting up this one.Like your drifting snow pic.

Nice one Malky , great to see some good weather

Grand day Malky with some A1 shots..

heatheronthehills wrote:Even Ben Wyvis had shrugged off the cloud and we were kicking ourselves that we didn't just do it. Still, we had a great wee walk and enjoyed the views. Looks like you had the stunning conditions we had hoped for

I almost went somewhere else too, but decided the weather was changing too much for any one place to be bad for too long. I must go up some of those low hills above Muir of Ord sometime - they look interesting.

BlackPanther wrote: Ciste Dhubh ridge was one big overhang, we had to walk on the steep western side to avoid a disaster... Risky stuff, but I must admit, one of the best adventures in my life

That looked great fun. Subconsciously, I keep picking hills where I won't need crampons, even though I take them. Must get up something a little narrower and more adventurous this winter!