Creag Dhubh - A Graham with a view

Creag Dhubh - A Graham with a view


After yesterdays day of winter skills work on Aonach Mor, John and I had booked into the Tulloch bunkhouse for the night. Our target for the sunny, blue sky morning, was the Graham, Creag Dhubh, a couple of kilometres back up Glen Spean. Chatting to the bunkhouse owner in the car park, we could see the fully snow covered hill above us. (pity I didn’t think to take a picture at this point, was a lovely view of it)

Heading down the road in two cars, we passed the entrance to the old church we could see up on the hill, a quick stop and a turnaround to head up the church track to find some parking. A little way up, beside some cairns with crosses on top, a small space is available for 2 cars. Booting up here, the cloud closed in and the snow started falling.

Walking up the steep track, we soon cleared the trees and reached the church, with its car-park, could have saved us a wee half mile uphill slog. The church seems to have several names and is also known as being the church that appeared in Monarch of the Glen, which was filmed around this area. Fascinating hillocky graveyard, which we spent more time in on our way down.

Passing the church, there's a small area covered in white gravel, for “the innocents”, not sure if its a communal grave for children but no individual markers. Can’t find anything on the internet re this either. Through a gate on the left and then follow the path up over boggy ground and round a small hill. No snow at this point but very wet and boggy underfoot. Starting to climb above the wee church The route we had was straight up the front, very steep but an alternative involved driving up Glen Roy, so we settled on something in between, heading off to the left, away from the steep section, towards a series of hillocks then up to the shoulder. There were plenty of deer roaming around above us. A check of the map shows no great drop between any of these hillocks so we meandered up . My winter boots have caused various issues since I got them in December, today I had new Sorbothon insoles but now my heels were rubbing. Stopped to put a compeed on my left heel, didn’t really ease the pain, but at least no more damage would be inflicted (ended up with a burst blister on my right heel!!!)

Think next winter may see a new pair of boots, a size bigger. Deer up on the hill Rugged man o the mountains or what

The boggy ground soon became more heathery with the snow becoming more prevalent. Small bursts of steepness, followed by easier stretches. These were handy for breaking up the climb. I then adopted a ten pace strategy, count each 10 steps, if I started the next set of 10, had to finish it, no stopping. My hill fitness has suffered from the lack of hills in the past 2-3 mths, need to push it a bit now, get back up to speed.

One or two of the nice flat sections of snow were knee deep and deeper still in places. At one point, I saw John, a bit ahead (no change there) disappear about hip deep before turning back and skirting round. I managed to steer left of this section and avoid the deepest part. It was quite hard to see the contrast of the snow drift against the ground ahead. Nevis range coming out of the cloud Pretty soon, the ground levelled a fair bit with more rock and grass under the snow, ice became an issue, but it wasn’t so hard that we needed crampons or axe, we could still dig it with our boots and came up at the cylindrical trig point with its coating of windblown rime ice. Cylindrical trig point near the cairn

The cairn is a little way past here at 658mtrs and as the visibility had gone and the wind was up, we sheltered behind this to have a cuppa and some food. 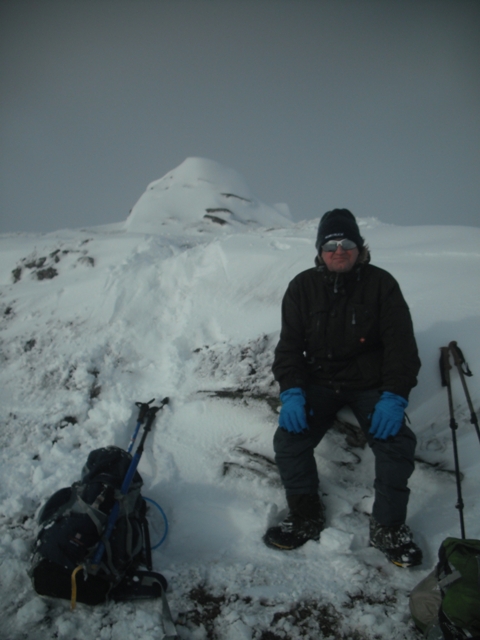 Nice spot for a cuppa Cairney at the cairn

Thankfully, after only 5 minutes or so, the sun broke through and the views started to appear around us. We took some pictures then packed up to head off.

At 12:30pm, we headed off, West, towards the Nevis Range, with extensive views opening up. For the early part, we simply followed our own footprints back down. Reaching the deep section we nearly lost John in earlier, it was now much sunnier and we could see the drifts of snow in the wee gully. Think Johns suggestion of 'why don't you go jump in there' came from a good place,,,but no,,I wasn't going to jump

I did however, go for a wade towards the deep section, pretty sure it would have been waist deep had we dropped just a couple of feet down. A few opportunities for bum slides but not really steep enough, so ended up more like a bum bump, Playing around in the snow On the descent, views opening up of Nevis range again

Slightly lower and with the views constantly giving, I got the best view ever from a loo stop! A little further down, we decided to head more directly for the road rather than up the shoulder we used for our ascent. This was easy going and again, as the snow became less, the bog became more. We could see the small hill we climbed above the church ahead and decided to aim for the back of this and come round under the Church this time. The last section of hill was very wet and a bit slippy as we negotiated round some trees/roots, before arriving in the field next to the bottom half of the old cemetery. John commented on this being a great wee camping spot, and indeed it would be, tucked out of the way, and no issue with the neighbours making any noise.
Passing through the same gate we started from, we had a wander round the graves. Lots of McDonalds, Camerons and McKenzies. There were a few war graves, local boys, aged 18-21, various regiments and all killed in WW1. Some lovely celtic crosses scattered around too. There are no signs etc on the church but I believe its a Catholic church. Lovely carving of a celtic design, possibly a sword outside and visible from the road below. Celtic slab down at the church yard Down through the old graves to the church Off down the track to the cars by 1:45pm on a lovely sunny afternoon.

Smashing day to end a great weekend. (cafe at Dalwhinnie would have been nice for a burger on the way home, but its shut and up for sale, shame, but coffee and leftover sandwiches in the next layby down the road was fine)
John off up the A9 and home via Tomintoul and the Lecht. Me, south, with stunning snow covered hills and a journey completed in daylight, what a treat.

Will have to investigate this one

..shame about the cafe

nice one gillc,
i will see you regards your toilet view and raise you with this is the famous westminter II portable toilet seat, seldom seen to the non angling fraternity.

mgmt! wrote:nice one gillc,
i will see you regards your toilet view and raise you with

this is the famous westminter II portable toilet seat, seldom seen to the non angling fraternity.

That's one heck of a shovel to be carting around the hills,,,still think my view wins lol

That brings back scary memories of nearly getting blown off the summit!

Fine wee hill and ideal for the weather we have at present! Get's you out that is the main thing!

The Rodmiester wrote:That brings back scary memories of nearly getting blown off the summit!

Fine wee hill and ideal for the weather we have at present! Get's you out that is the main thing!

It was your route I had downloaded on GPS no need to take it out though, vis wasn't to bad. Only went to your start point, then realised you walked from the bunkhouse

Great hill to finish off the weekend, some superb views, especially to the Easians

Wont be long till your flying again

Great report, Gill. You have to get top marks for perseverance with these boots!

I think you should start a new thread for the best loo views (from, not of!).

AnnieMacD wrote:Great report, Gill. You have to get top marks for perseverance with these boots!

I think you should start a new thread for the best loo views (from, not of!).

Im hoping that someone is suffering with a new pair of size 6,,then i can scoop them up off ebay lol