stags, more stags and plenty cloud on Stuchd an Lochain

stags, more stags and plenty cloud on Stuchd an Lochain


Set off for a nice mid-week hillwalk and planned on doing Stuchd an Lochain and Meall Buidhe. As we started to drive in we were not put off by the cloud and drizzly rain setting in - we were prepared for that!! Just as we were approaching the Loch an Daimh we were lucky enough to stags everywhere! there were literally hundreds of them - munching on hay, lying down in the hills and wandering around - got some half decent pictures (still to sort these out and upload a couple). So Loch an Daimh is quite appropriately named!

Pretty steep ascent straight away though we made fairly quick time in gaining height and were at 750m before we knew it. It was at that point the weather def took a turn for the worse - low cloud, strong winds and rain that felt more like needles being thrown at me!

It was a great day for testing some map reading skills and trying out the new GPS mapping software on the iphone - excellent!!

Didn't really hang about at the top and headed straight back down - with the rain and wind even worse now!
Still patches of snow up there and it is deep in places - as i discovered when i ended up knee deep in it! Although it was wet and boggy in spots it wasn't quite as bad as i thought it might be. Still had lots of kit cleaning to do when we got back though!

We had all intentions of doing Meall Buidhe as well that day but with a slightly later than planned start and the dreadful weather we decided to give it a miss and save that one for a slightly better day!

Despite the weather and complete lack of visibility and views it was a great day and enjoyable walking, well it was a day off mid-week which is always fun! Looking forward to going back when the skies are clear(er!). 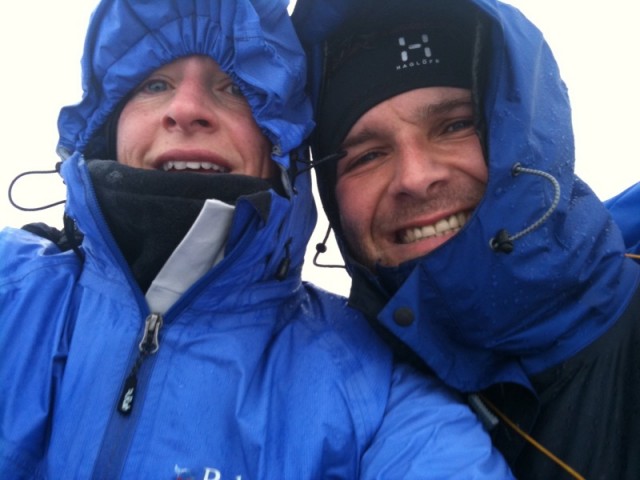 us at the top smiling despite the rain and total lack of view!

and a couple of the many stags we saw... 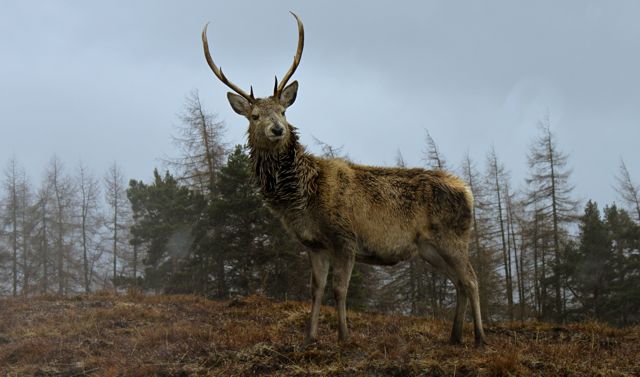 ive been on looking several times for these pictures, that is fantastic, really big passion of mine deer and stags, i was on my way out with my better half months ago, coming out the back roads of muirhead going to Kirky, we came across a young deer that was knocked down in the middle of the road and still alive , but was badly injured, we mangaged to lift it to safety to the side of the road and we sat with it for a couple of hours keeping it warm until the rspca came out, sadly it had 2 broken front legs and she put it down, real shame, ever since really go out of my way to spot deer in the country park and the mountains.. thanks for putting them up

I got up this hill today - ridiculous conditions from the fence line onwards - gales, sleet, you name it. Sounds a lot like your day. The summit was surpisingly calm and very quiet. Met a very nice group of people up from the Glasgow area which included Terrymcbb from the site who had lost some crampons earlier this month. They allowed me to pose like the big American I am in their group summit photo man those stag like there photos!! another great picture, was up the cobbler on saturday, seen about a dozen on the hillside, suprising though they stayed well clear of the path, the amount of people there they should be used to us!! this looks a good walk think it may be on the cards for saturday

Excellent photos! Walked up here a fortnight ago. Seen a few stags, but just too far away for my wee camera. Met 'Irnbrewman'

with his Fujipix 900 camera, he had no problem catching the deer clearly, whether they were as good as these photos though, I doubt it?

cheers! I was lucky (but guess the stag was not) - he seemed to be a bit blind in one eye so I was able to get close. I was amazed and the number of them but tried hard not to disturb them too much - i believe they are quite weak just now after a hard winter! I think stags are incredible creatures.
was a good walk - certainly got the heart rate up with that steep start straight away

that stag in the second picture looks mighty **** off about something