Couldn’t get out on the Saturday but Sunday’s forecast was looking OK at least until early afternoon. Saturday night 2300hrs, Traffic Scotland Glen Ogle traffic camera was showing heavy snow with lying snow on the road so wasn’t looking so good but it had cleared by the Sunday morning. Had a loop planned to take in the corbetts, Benvane and Beinn Stacath, and the graham, Creag Mhor (blue line on map). However, conditions turned out too difficult and had to return after the two corbetts (purple line).

Parked in the off road space at Ballimore, crossed the bridge and set off up the hillside southwards towards Benvane. Initially boggy then soft, slippery snow from about 300m.

Not long after that the cloud rolled in – still dry but very little visibility at times. Found a fence further up which helped but by that time there were substantial areas of deep, soft snow – knee deep much of the time but thigh deep with bogs below made for harder going.

Got to the summit with no visibility.

Debated for a time whether just to return to the car. Decided to drop down to the west and see what it looked like from there. Slippery descent to the west then crossed to pick up the track.

Weather was looking a little clearer – even some blue sky appearing so decided to head for Beinn Stacath.

Farffed about for some time wandering up and down deciding which way to go. Knew I needed to go west but the track heading uphill seemed to be going east. Eventually realised that further up the track doubled back on itself.

Turned off the track and headed westwards aiming just north of the 697m point. Once again encountered deep snow – where possible aimed for where I could see grasses appearing but frequently just deep snow covering bog. 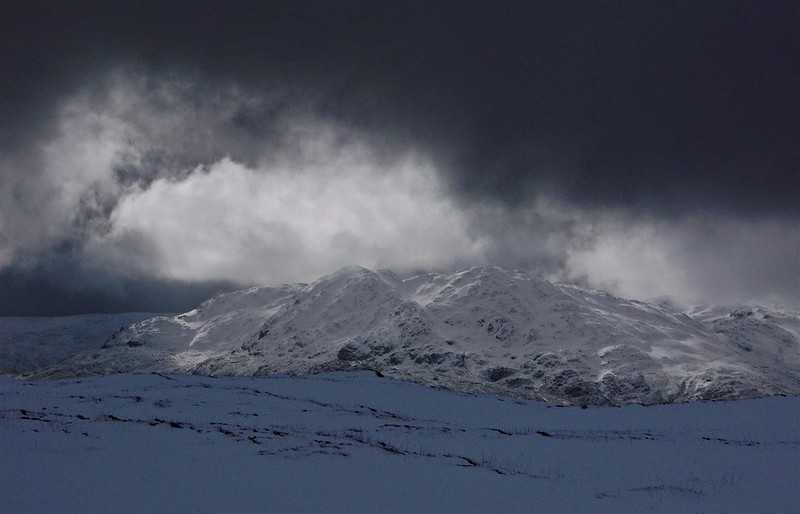 Past the 697m point I could see Beinn Stacath to the NW but needed to drop down before climbing back up.

It was starting to snow and the wind had strengthened significantly. Took what seemed like ages to get across and then up to the ridge. Weather closed in again with no visibility but from here it was north to the top.

Got to the trig point.

No way was I even considering the graham in these conditions. Headed off SE then westwards. Large tracts of deep, soft snow again – sometimes was just peering into whiteness.

On downwards until I had dropped down low enough to see the Allt and the cattle byre which has a bridge marked on the map.

Through the bogs and over to the banks of the Allt to find somewhere to cross. Wandered up and down but the water was too deep – really couldn’t be bothered removing boots and socks in the cold and sleety rain but didn’t want to go through the water. In the end retraced my steps and crossed the bridge at the byre. Then walked back on the track to the north of the Allt – came across a couple of locked gates announcing a private deer park but by this time had no option but to climb them and keep going.

Found this a very hard day partly as I hadn’t been out for a while and partly due to the conditions. Think I’ll be waiting for guaranteed clear blue sky days for the next trip…………

A boggy pair of hills sure enough RH,had one of our roughest days on Ben Vane a couple of Xmas's ago,you did well to keep going

Surely due a good spell soon

A tough day right enough eh , I have nt been out since 30th January like you I am now waiting for a blue sky day

Could be a while

Was just wondering where you'd got to when this report appeared on the site. Well done on another very hard day in the hills but as you're so close to compleation I thought you'd be out bagging Munros

Looks a nice route. Pity about the final bump but safety first always.

Weather has been brutal but hopefully spring/summer will bring glorious sunshine, clear days and a few compleations

Great write up as always RH, it might not have been the most enjoyable of days but you got out there and nailed a couple more (got some lovely shots too)

Sounds like a tough day RH. I turned back on Benvane from Ballimore a few weeks back after soaking the 2 pairs of socks I had by twice finding bogs hidden by snow and ending up with numb feet

Kudos to you for getting the 2 Corbetts done

I may follow your route once the snow has gone. Cheers

Some nice atmospheric photos in there...

That looks and sounds a tough day. Sometimes we can get too greedy when we plan routes and not take take the soft snow into account, i've been there a few times.

pigeon wrote:A boggy pair of hills sure enough RH,had one of our roughest days on Ben Vane a couple of Xmas's ago,you did well to keep going

that's my stubborn streak showing through

Collaciotach wrote: like you I am now waiting for a blue sky day

dooterbang wrote:Weather has been brutal but hopefully spring/summer will bring glorious sunshine, clear days and a few compleations

aye doots - you don't have many to go now

ChrisW wrote:Are you coming out here

if only....was over there last year so can't make it again this year I'm afraid

lomondwalkers wrote:I may follow your route once the snow has gone

Johnny Corbett wrote:Sometimes we can get too greedy when we plan routes and not take take the soft snow into account, i've been there a few times.

know what you mean, JC - escape routes and alternatives are all the more important in winter