This is one from 6 months ago – the same day Stretch did the Ben Starav and Glas Bheinn Mhor circuit and deservedly scooped the Report of the Month prize. We were probably about 2 hours behind him and so missed the amazing inversions that he got, but we still had a cracking (and ultimately eventful) day on the hill.

A group of mostly teacher colleagues plus a few assorted friends and partners had spent a weekend at Bridge of Orchy back in March, during which we had climbed the Buachaille as well as Beinn Dorain and Beinn an Dothaidh. Six months on and a smaller group of us came back for second helpings.

For the Saturday, we had selected Ben Starav and Glas Bheinn Mhor. The seven of us jumped into two cars and headed up past Loch Tulla and over the edge of Rannoch Moor towards the Kingshouse and the turn off for Glen Etive. The Buachaille loomed large in our view, greeting us like an old pal.

As we turned onto the Glen Etive road, myself, Debbie, Geri and Berenice leading the way in our car with John, Michelle and Mary following behind in her car, the roadside was a hive of activity with wild campers going about their morning routines. The road seemed to wind on forever and by the time we reached the start of the walk, the roadside was cluttered with vehicles.

We tramped back along the road to the gate and down the track to the bridge where we paused for a group mug shot. On the bridge just before Colleitir

After the horrendous bog fest behind the house at Colleitir, we headed out into open ground with the bulk of Ben Starav ahead and the main Glen Etive hills behind. I tend to remember useless facts, figures and place names easily, however my wife does not possess the same sort of mind and usually struggles to remember the names of unfamiliar things or places, and so it was that we came to be climbing what became known as Ben Stavros. I somehow couldn’t shake the memory from my mind of a particularly sleazy Greek waiter from our week on Zakynthos in 2004! 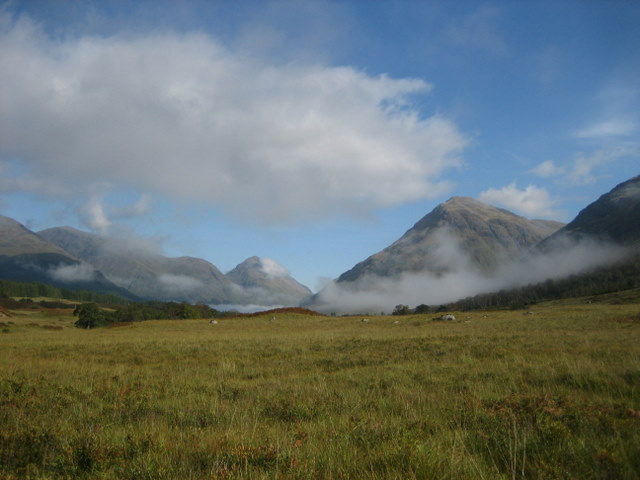 By the time we turned up onto the long north-east ridge, the group was becoming strung out, with Geri (a.k.a. Mountain Goat) setting a cracking pace closely followed by Berenice. The other three were bringing up the rear with Debbie and I trying to keep the group together as much as possible, but failing miserably. 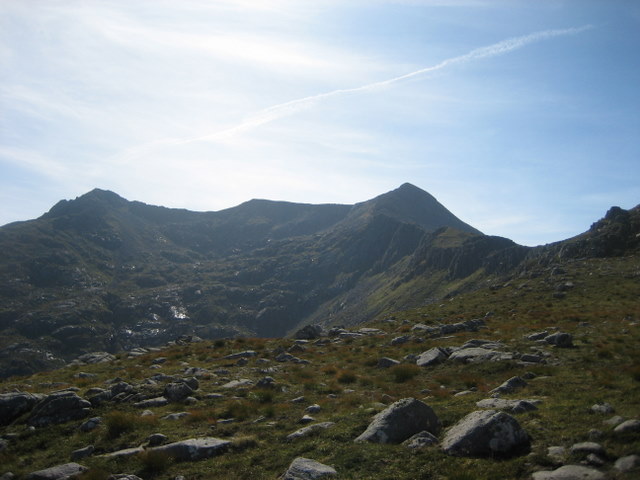 On the ridge looking summitwards

Eventually, while we were having a little breather, John came striding up to us at a considerable pace and with what seemed like it was about to be his last breath, told us that the three of them had decided that they were only going to do Starav. We were all booked in for dinner in the hotel bar at 8pm, so there was plenty of time for the other four of us to do the full traverse and meet them back at HQ. Debbie and I caught up with the other two as they were taking a break just short of the summit. Once there, the views were stunning down the length of Loch Etive and south over to the Cruachan massif, as well as north west over Glencoe and away to the south east and the Loch Lyon, Loch Tay and Crianlarich hills. This was what Saturdays were made for! 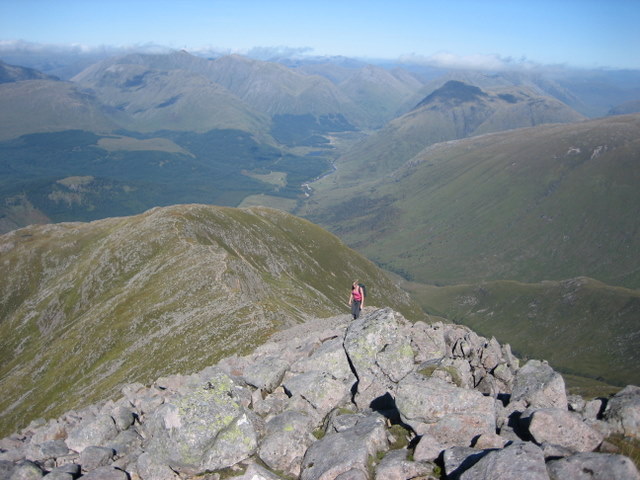 Debbie on the boulder fields just below the summit 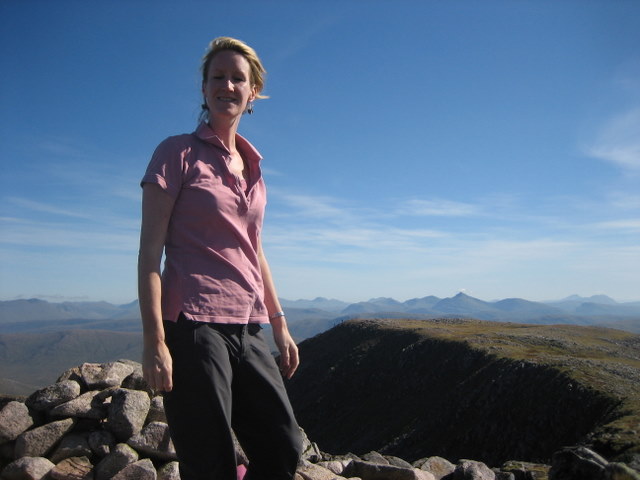 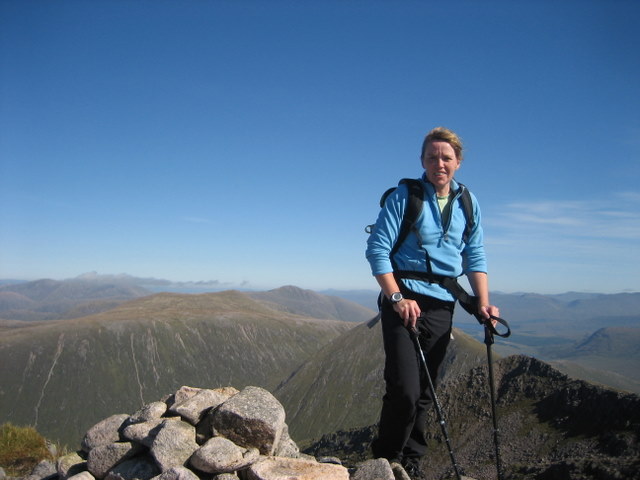 Geri at the summit 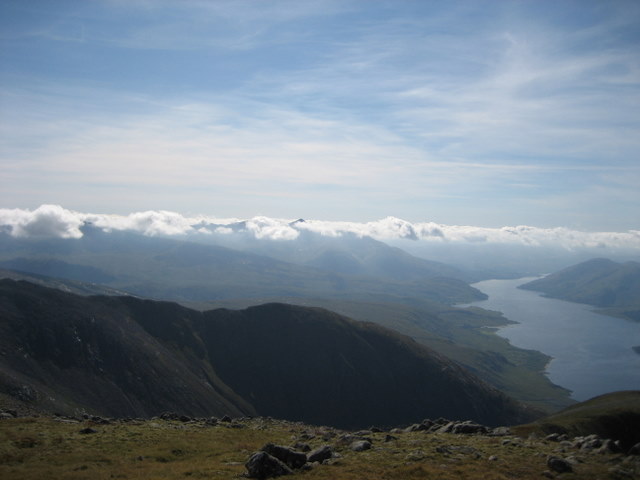 South down Loch Etive with Cruachan popping up After a summit lunch, we headed along the cool little rocky ridge to the bealach where you turn off for Beinn nan Aighenan, but this wasn’t on the agenda today. After a short but steep climb we summited on Glas Bheinn Mhor, Munro number two of the day. Beinn nan Aighenan from the bealach Glas Bheinn Mhor, with Loch Dochard visible beyond and Loch Tulla in the far distance Berenice, Geri and myself approaching summit of GBM Myself and Debbie at summit of GBM

From the descent through the crags we could see a couple of people stretched out on the grass at the bealach below and they were still there when we got down. We flopped down beside them and compared notes on our respective days. I think they said that they had come down off Stob Coir an Albainach and were taking a breather before setting off on the ascent of Glas Bheinn Mhor. They were also taking some whisky on board too and seemed generally in high spirits, although when they set off and I enquired whether this was their last Munro of the day, one of the guys replied “last one ever!” Nobody seemed entirely clear whether this meant he was about to finish the round or whether he’d just had enough and was packing it in

. Anyway, we sat a while and watched as they weaved their way (a little unsteadily it has to be said) up the path onto Glas Bheinn Mhor, before we picked ourselves up and started to head back down the path towards Colleitir.

As Stretch himself described it in his prize-winning report, the lower section before the path joins up at the bridge was a swamp of nightmarish proportions, so it was a real relief to get back onto the solid path, which, apart from the section around Colleitir, was easy going all the way back to the car.

Most of the cars from earlier in the day had gone, but there were still quite a few scattered along the roadside. The last thing we expected though was to see Mary’s car amongst them

. After a quick peer inside just to make sure we weren’t mistaken and that it was indeed the car that really should by now have taken John, Michelle and herself back to Bridge of Orchy, we started to debate what might have kept them out on the hill for longer than it had taken us to do the full whack! We scoured the ridge coming down off Starav and the path back along the glen using binoculars but there was no sign of the three of them. We waited a good half hour, by which time it was getting distinctly dusky, and although a number of walkers came through the gate and back to their vehicles, there was still no sign of the terrible trio. I debated walking back in to see if I could intercept them somewhere but the others thought it wasn’t a great idea. We had no mobile reception between the four of us, so we decided to drive back out of Glen Etive to the main road at Kingshouse where we would probably pick up reception. At least then we could at least try to call them, although chances were that they would not be getting reception either. As suspected, when we got there and made the call, we got their voice mails. Now we had to make another decision – to head back to their car, knowing that if there was still no sign of them and with it now almost dark, there might not be much we could actually do in a constructive sense, or to head back to the hotel. The thought had occurred to us that they might actually be back there already, that Mary’s car might not have started and they somehow got a lift back, but then surely there would have been a message left on the car. The thought of dinner and a few pints is normally like paradise after a full day out on the hill, but as much as I was looking forward to that, I couldn’t help but feel slightly uneasy

. Having trained and walked a lot with the other three, especially John and Mary, I knew that they were a competent unit and barring a complete catastrophe, should be able to look after themselves on the hill. The weather conditions were also fairly benign, so I was sure that they would be OK.

Back at the hotel, we quickly parked the car and headed into the bar, where we were just about on time for dinner. As we got a round in, one of the staff overheard us talking about our group members still missing on Ben Starav, and she came over to speak to us. She said that her husband was in the local mountain rescue and we should really get him involved at this stage, so she made the call to him. He arrived about ten minutes later and took the details, including level of ability e.t.c. He didn’t seem too concerned by anything we said and suggested that we leave it until 9pm and if there was no change by then, to get back to him. By this stage, Berenice and Ursula (who had not been feeling too good that morning and had decided to sit the day out in the hotel) had quickly scoffed dinner and jumped into a car to head back along the road to Glen Etive, while myself, Debbie and Geri had stayed in the bar with a fresh round of drinks and a rising tide of gallows humour!

Eventually Geri’s mobile rang and it was Berenice calling to say that the others had just called to say they were on the road back, and so she Ursula and herself were turning around and heading back. It was a distinctly sheepish trio who eventually traipsed into the hotel bar while I made a call to the mountain rescue bloke to tell him he could stand down and relax.

To this day, they still cannot really explain what had taken them so long, other than reports of a particularly nasty section of scree and boulders coming off the top of Starav, and the fact that John had been randomly picking up “interesting rocks” and popping them into his pack!

Re: Fond memories of Stavros

How odd. Glad it all ended well though.

Re: Fond memories of Stavros

One of the top three day's I've had out on the hills - however, I'm still cross about my private island campsite being invaded that night