This walk was like a game of two halves. The first few hours were a pleasant walk up a stony ridge in bright sunshine. Then the clouds came in and the rest of the day was spent in fog, mostly using fence lines to navigate through some of Wales's finest bogland.

The Aran ridge path from Llanuwchllyn at the south end of Llyn Tegid climbs gradually past a series of smaller hills to the high summit of Aran Benllyn, and then on to Erw y Ddafad-ddu and Aran Fawddwy. 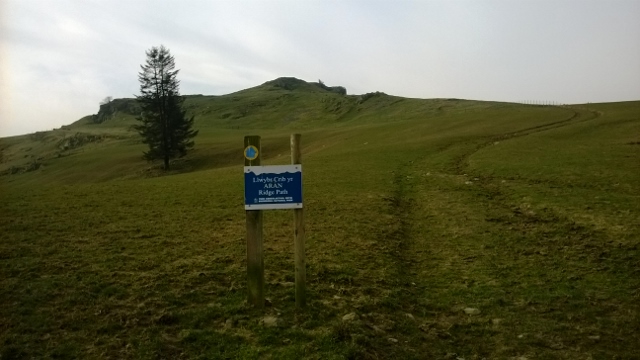 View back to Llyn Tegid 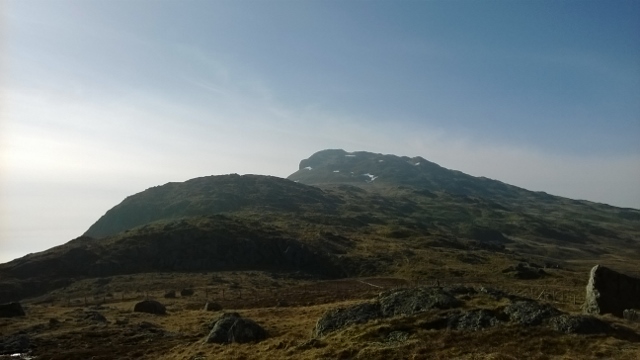 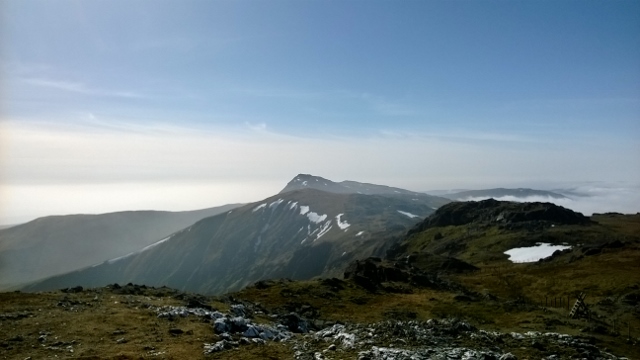 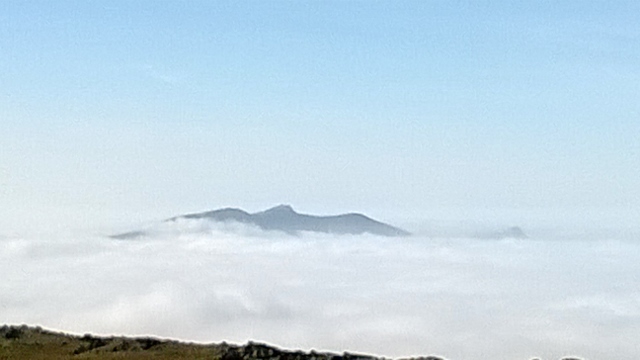 Cader Idris above the clouds I got as far as the southern top of Aran Fawddwy when the weather suddenly changed, within about 2 minutes, from bright sunshine to a thick fog.I was a bit worried about getting lost in the mist, but decided to carry on anyway.
To get to Gwaun y Llwyni I followed the fence line to the south east as far as the memorial cairn at Drws Bach, and then turned right along a path which follows the edge of the escarpment to the west and south.
This path goes quite a way downhill before going up to the summit .Gwaun y Llwyni only just qualifies as a Hewitt, as the summit isn't a lot higher than the surrounding land. I then followed some more fence lines, through a very boggy col, and up a steep rocky path to the top of Glasgwm.
Many of the stiles around here have little signs on them giving the OS grid reference, which I found very helpful in navigating. It's not very common to find a large lake on top of a mountain.The one on Glasgwm is so big I couldn't see the other side of it. From Glasgwm there's a very boggy path along the edge of a cut-down forest and then up to Pen y Brynfforchog.
Although this is the last Hewitt of the walk,it isn't all downhill from here,as there are a couple of short steep climbs over minor summits before the fence turns to the left and down a steep grassy slope to a small car park on the A470.

Having reached the road, I then had the problem of getting back to the car.There is a bus service along this road, but it's not very frequent.Fortunately, when I stuck my thumb out someone stopped and gave me a lift into Dolgellau, where I had just enough time to get a coffee before catching the bus back to Llanuwchllyn.

Great report Andy, what a shame the fog rolled in half way and killed your views.

Now this is a great idea, there ought to be more of this.

Glad to hear someone gave you a lift, its such a good feeling to see someone stopping when you've got a long tarmac trudge ahead