There’s only one way to get hill fit – and it’s not sitting on a spin bike at the gym three times a week. It may keep some of the excess pounds off; it may make you feel smug after a mega-cardio work-out: but it doesn’t fill the fitness gap left after a six month Munro free absence. OK, there was a pair of Corbetts back at the end of November, but this was the longest I’ve been off the big hills for years.

Could getting back out there prove to be pain-free?

I had thirty six hours that coincided with the promise of a great window of weather and, lurking down Glen Etive, Beinn Fhionnlaidh was one of the nearest red flags that could be turned blue.

There was no point in trying for a multi-Munro day. Just savour one and enjoy it. Leave something in the tank for another hill the day after. Let’s ease back into things slowly.

In the end, any potential lack of fitness proved to be least of my worries as the day proved to be a bit of a traffic sandwich.

Rush-hour traffic and motorway accidents conspired with numerous roadwork traffic lights to result in what must be the latest winter start I’ve ever had: nearly 11.30am, and it had been a long time since breakfast. Fortunately, a midweek trip meant that things were quieter than would be expected with such glorious weather, and so there was plenty of space in Glen Etive to park before the bridge at Invercharnan.

From guides, maps and previous reports I had expected the initial stage of the day to be a silent shrouded slog through the forest, with wall-to-wall trees as the only view. Recent logging now leaves the landscape on one side of the forest road resembling a First World War scene, with the remnants of single shot-blasted trees punctuating muddy holes and the debris left after arboricultural carnage. It was nevertheless a pleasant surprise to be able to enjoy an open aspect of the surrounding hills that wouldn’t previously have been the case: an earlier than expected view of the target for the day ahead. Together with the fresh fragrance of pine resin still hanging in the air, and the resonance of birdsong in the early spring (it has a depth and a promise to its sound that is lacking during the winter months) it all made for a surprisingly pleasant introduction to the day.

The route soon reaches what was once a firebreak, but is now just a narrower track, before emerging from what is left of the forest. The start of the track to the left is clear, heading off towards the shoulder, Meall nan Gobhar, and aiming just to the right of a great slash in the hillside. A clearer, drier and more defined path heads off towards Sgor na h Ulaidh, but don’t succumb to temptation. Occasional stretches of vaguely defined path link with one another up the hillside to the rounded hump of Meall nan Gobhar. Here the path heads across and up into CoireReidh towards the summit ridge and increasingly consistent but soft patches of snow. Sometimes on a track, but more often than not simply finding an easy way across the rising ground, the rounded ridge was reached.

The panorama northwards revealed all the Glen Coe peaks, The Ben beyond and the likelihood that lots other people were enjoying a great day out in such fine conditions.

A largely snow-covered rocky step close to the corniced edge near the top provided the only potential difficulty as the snow wasn’t as firm as it could have been: a slushy slope on one side and a cornice on the other. North, across to Bidean nam Bian

With hindsight the danger was more imagined than real and the top was reached comfortably within the three hour recommended book time. A hint of warmth from the sun and just a light breeze meant that it was pleasant enough to spend twenty minutes soaking up the position and relishing being back on the hills. 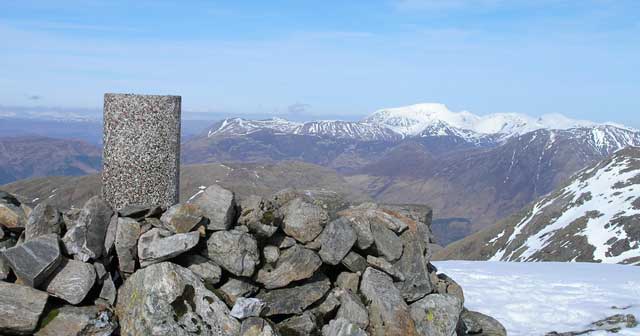 Ben Nevis in the distance from Beinn Fhionnlaidh

This was always going to be a routine straight up: straight down kind of day so the descent merely required less effort in the reverse. The open view of Ben Starav wouldn’t previously have been enjoyed for the full length of the descent and again the logging wasteland could be forgiven as the open views beyond are a definite improvement: hopefully the scarred hillside can be reinstated to a more attractive state in the near future.

It was only when nearing the end of the track, and close to the car, that I noticed something that I’d missed on the way out: warning notices and a path diversion instruction which discouraged use of the route I’d followed. Thankfully, that hadn’t lured me in otherwise the whole feel of the day may have been different. 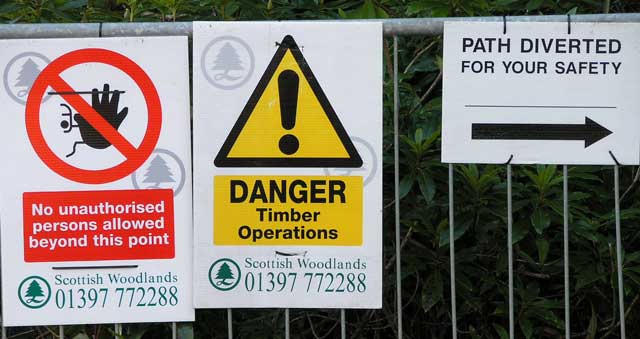 Was I supposed to pay any attention to this?

Back at the car, and not feeling too tired, I’d enjoyed a day that hadn’t proved to be too taxing and the route is one that allows you to enjoy the surroundings rather than worry too much about the challenges it presents. So, with more energy than I thought I’d have, I looked forward to the following day and the chance to get another Munro climbed on the way back south.

And then they closed the A82.

A very nice day to make your comeback then Nigel! Nice photographs to boot. Might see you at Ullapool.

The Rodmiester wrote:A very nice day to make your comeback then Nigel! Nice photographs to boot. Might see you at Ullapool.

Thanks Rod - at least after a couple of trips out I won't be too unfit next week - so yes, hope to see you there.

My friend and I were up there on the same day as you, you probably saw our crampon marks heading up the east ridge...

We came from Elleric via the Lost valley on the south side of the mountain (which was worth the walk in itself) and then yomped down the west shoulder taking in the views out to Mull.

what a spectacular day it was!!!

A check of my records reminds me that it was in September 2000 that a pal and I climbed Fhionnlaidh and Beinn Sgulaird from Glen Creran. That was a fairly hefty day out, with a late start, a deep drop between the two Munros, and a descent inspired by a glorious Appin sunset.

Runrig: "Ah! But mountains are holy places, and beauty's free"