Decided to have a go at the two Hewitts North of Hartside Pass today. Both of which have a reputation for being boggy and wet although a fence line goes directly from the Pass right over both summits meaning that on a foggy day like today they are pretty fool proof.

Didn't fancy starting the walk from the High Point at Hartside so left the car at Gamblesby and took what I presume to be the original line of the pass before the road was layed. Path up to Hartside Pass

This path eventually crossed the road and become a tarred track for while before branching off to the left towards the Pass where the cafe came into sight. I reached the cafe after 40 minutes of fairly easy walking up a well graded path. It was then a case of following the fence line into the mist and out on to the open fell towards Black Fell. There were plenty of boggy patches but after a few inclines I was standing by the Trig on Black Fell. The next bit of the walk was the worst towards Tom Smith's Stone Top with several peat hags (which were seriously wet today) and boggy patches to cross. With the mist really in, I tried to stay as close to the fence as possible and at times even had to use the fence to shimmy across very wet patches. At more than one point I considered turning back during this ridge walk and returning on a more frozen day as this was now becoming very difficult work. However, I felt that I would regret this having done one half of my intended goal plus despite the bog hopping I was still making pretty decent time.

Thankfully after Tom Smith's Stone Top the terrain improved slightly and while still soaking it was much easier to walk across towards Grey Nag. The mist also began to lift at this point, allowing me for the first time to see my target along the ridge. 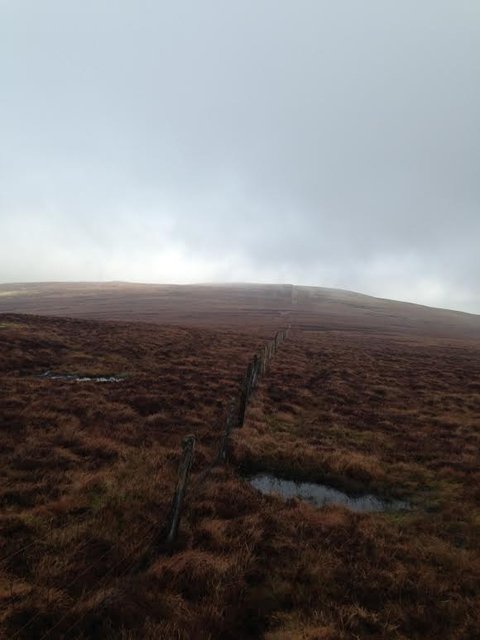 The top of Grey Nag had some welcome stones but I didn't linger long as I was cautious that I had to make my return journey back along the ridge and to be honest I just wanted it out of the way. I could now see the tops of Blencathra and Skiddaw in the distance and I asked myself the question "what on earth am I doing here?" but it has to be said that with the mist lifted the ridge walk back seemed far less arduous and by following bits of paths away from the fence I was able to avoid the worst of the ground all the way back to Black Fell. Cross Fell was now in view as was the route back to Hartside Cafe. Once back at the cafe I grabbed my first drink of the day and then set off on the pleasant and easy route back down to Gamblesby.

All in all, two very wild North Pennine tops that are great for the person who wants to be alone. However, I won't be rushing up here again and if you've yet to scale Blencathra, Skiddaw or even Cross Fell then I couldn't recommend these two first!

If you are doing so then it is almost certainly wise to leave them for a frosty and clear day.