our_route.gpx Open full screen  NB: Walkhighlands is not responsible for the accuracy of gpx files in users posts
Just like yesterday, Sunday morning dawned sunny and warm. Indeed, this district had the highest temperatures in Scotland today. Amidst such a sublime setting by that loch shore, what a pity that the minute I stuck my head out of the tent, I had to contend with clouds of those little beggars again, pestering me as I fed, washed, and packed my gear after a quick pic. One burn running into the lochan seemed to begin around the lowest point in the ridge above, and would help maintain fluid reserves. In no time, though, I was flagging, stopping after short sections on admittedly steep grass, glucose sweets not noticeably improving my energy levels. I gritted my teeth, but my confidence had again taken a knock.

Just like yesterday, brilliant views brought at least a measure of compensation: a telescopic line down to the lochan, then up and beyond Slat Bheinn to the Druim Chòsaidh, and as I reached higher, more of Ladhar Bheinn and bits of the Rough Bounds. It was painfully slow to the saddle though, and I felt almost like a fish out of water when I at last flopped onto the ridge. The onward route was self-evident: undulating, needless to say, but none too difficult, and marked part of the way by a line of old fence posts.

Just like yesterday, I encountered one lone walker, from Dundee or thereabouts. I recalled later (alas) his mentioning that a trig point did not now denote the summit proper, but at the time, this didn’t register, and I was soon enough blithely congratulating myself and ambling past a cluster of rocks a little further west, pushing on to Sgùrr Sgiath Airigh, another Grade A viewpoint, from where Loch Hourn can be savoured in all its grandeur. I awarded myself a long break up there.

Better preparation, or even sensible scrutiny of my map would have returned me to the true summit, then back to the trig station, where the fence drops north-eastward, and from whence I could have picked up an easy path down to Coireshùbh that I had used on a first visit in the early nineties. Instead, a rocky route carried me at first promisingly towards Loch Hourn, then slowly but inexorably into the Allt Coire Mhicrail, the complexities of the terrain increasing as I went. A drop to the burn and a cut over a spur to get back more directly to Kinloch Hourn baulked much too large for me today, and I locked horns with a testing descent along the burn, shared with then giving way to boulder-hopping in the channel itself, where if nothing else, there was plenty of fresh water! After a mile or so of this, I reached a crux of huge tangled boulders above a little fall. A few metres up the left bank, I very soon found a tiny trail that took me all the way to the Barrisdale path, running by the cottage at Skiary (a corruption of Sgiath Airigh, sword shieling).

During a rather weary yet idyllic last mile or so, I exchanged a brief mutual glance with an otter, which shrank from my sight, and there were folk angling along the banks of the loch. My car had sat devoid of its chitty, which had travelled with me all the way, but it had not been removed or clamped! Somewhere near the now submerged Lochquoich House, I stopped for a retrospective picture, musing vaguely on why my visits to these parts have been so few and far between. Lovely though they may be, I had learned anew this weekend of the need to engage with wild land in order to best appreciate it. This is probably more true of Knoydart than of many a district, realities we must all, in my opinion, strive to maintain.

I stopped at a shop in Fort Augustus for something to sustain me during the remainder of the drive home. Well into the evening, on one of the hottest days of a very good summer, the village was still pulling out all the stops to cater for a multitude.

As I pored over my ageing maps during the ensuing days, they failed to clarify that Angus man’s claim, but several Web sites, including the latest O.S. data, settled it. Sgùrr nan Eugallt rises to 898 metres, a full four metres higher than the trig pillar and adjacent cairn. Considering this difference, and their relative proximity, I’m surprised that the distinction wasn’t drawn many years ago. With my normally innate predisposition to stick to any true ridge line, I will definitely have covered both tops on my 1992 walk, but it’s a shame that I didn’t commit to that little extra bit this time too.

My consistently laboured efforts during an otherwise great weekend left nagging self-doubts until my next stravaig, when all once again felt just as it always had. The hay fever will be a factor all of my days, and the medication, taken for the first time during the weeks prior to these walks, kept things like streaming or worse still, puffy eyes, at bay. I’ll need to take more careful account of their attendant side-effects, though, before I can return - as return I must - to complete the Munros, for instance - to places like Knoydart. 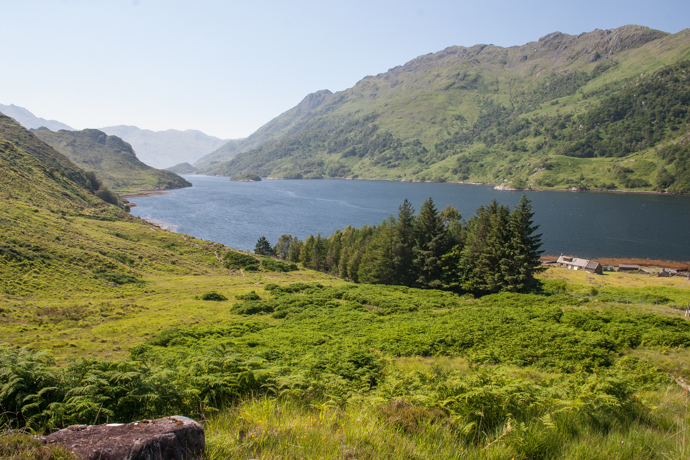 Skiary, Loch Hourn. My exchanges with the burn were at an end, as the Barrisdale path soon hoved into view. I now know where to pitch my tent, looks a superb place, in a totally wild rugged environment! Thanks for posting.

What a stunning area and a beautiful looking day

The Rodmiester wrote:I now know where to pitch my tent, looks a superb place, in a totally wild rugged environment! Thanks for posting.

Aye. Nae a bad place, but time it to steer clear of those midges!
Thanks for your reply.

Sarah86 wrote:What a stunning area and a beautiful looking day

Thanks for that, Sarah. A great area. One of the best. I hope you get in there sometime to enjoy it!

What a cracking trip ! Read part one earlier. Hoping to get to Knoydart some time this year - just hope I get weather like yours (even if there are midges about

I love this area - on our first trip there (in the early 80's) the midges were so bad they dive bombed our food while it was still cooking. 30 odd years on I can honestly say that eating midges does ye nae harm

rockhopper wrote:What a cracking trip ! Read part one earlier. Hoping to get to Knoydart some time this year - just hope I get weather like yours (even if there are midges about

Best of luck with any ploys you have for Knoydart. Look out for grizzled greybeard, hopefully moving at more normal speeds!

Thanks for your posting.

I love this area - on our first trip there (in the early 80's) the midges were so bad they dive bombed our food while it was still cooking. 30 odd years on I can honestly say that eating midges does ye nae harm

Thanks for the cracking reply - had me chortling loudly whilst in polite company, and having to offer explanations!