Left glasgow bright, but not so sparky at 6am & headed for the drumochter pass & layby 79 where we were meeting up with friends from Inverness & Aberdeen, some via Dundee. Much debate in the layby as wether we needed to take crampons etc. Most decided that the snow would be soft so no need but took axes just in case. Some of us also had old trainers & towels for crossing the stream up Coire Dhomhain. We were following the walkhighlands route for these two which my friend Glenn had added timings based on Naysimths rule. So 40 minuits from the car we should be at the point to cross the river & 38 minuits later we arrived at a sort of cairny looking pile of rubble.

Walking up the track we had good views of the coire creagach & clear sky above.

Once accross with feet dried & boots on we used my newest bit of essential hill kit, the Ikea bag to toss our trainers back over so we could pick it up on the way back down. Heading up Sgairneach Mhor having crossed the river

Fairly easy pull up the heather slope to the first summit spotting dear on the ridge & disturbing some white hares. Looking back over the Sow 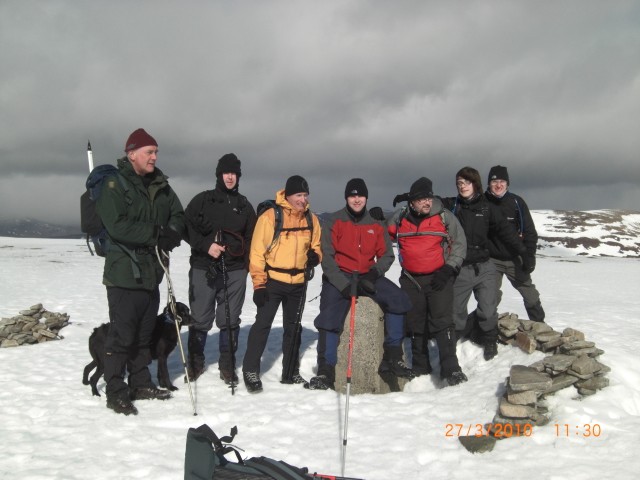 From the summit to the bealach was a big snow field which was hard work because we kept disapearing up to about mid calf in the soft snow. 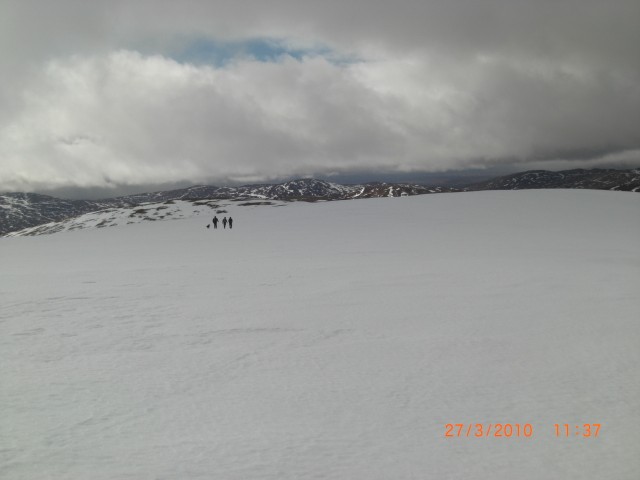 The day was quite blowy & although the summits were clear the views wern't great as there was a lot of cloud around about us. We stopped at the bealach between the ridge of Sgairneach Mhor & the Udlamain ridge, as it was shelterd from the wind, and had our first pleasent lunch stop for several months.

Then up onto the ridge & along the line of fence posts to Beinn Udlamain summit which almost resembles a scrap metal yard. At this point, minus lunch break, Glenn's timings were still spot on. Drop down to the bealach at the head of Coire Dhomhain & from there down quite steeply to the track back to the car stopping to pick up our ikea bag! Cars are over there All in all a very pleasent walk not to taxing or strenuous.