cmd arete 27-3-2014 actual.gpx Open full screen  NB: Walkhighlands is not responsible for the accuracy of gpx files in users posts

Originally planned to bag Sgurr a'Mhaoraich, but got held up at Pulpit Rock on the A82 as it was late opening and then we had to wait for wide HGVs to pass from the other direction. Finally got through all the roadworks and decided to go for CMD instead, got to north face car park and predictably there were more roadworks on the path. 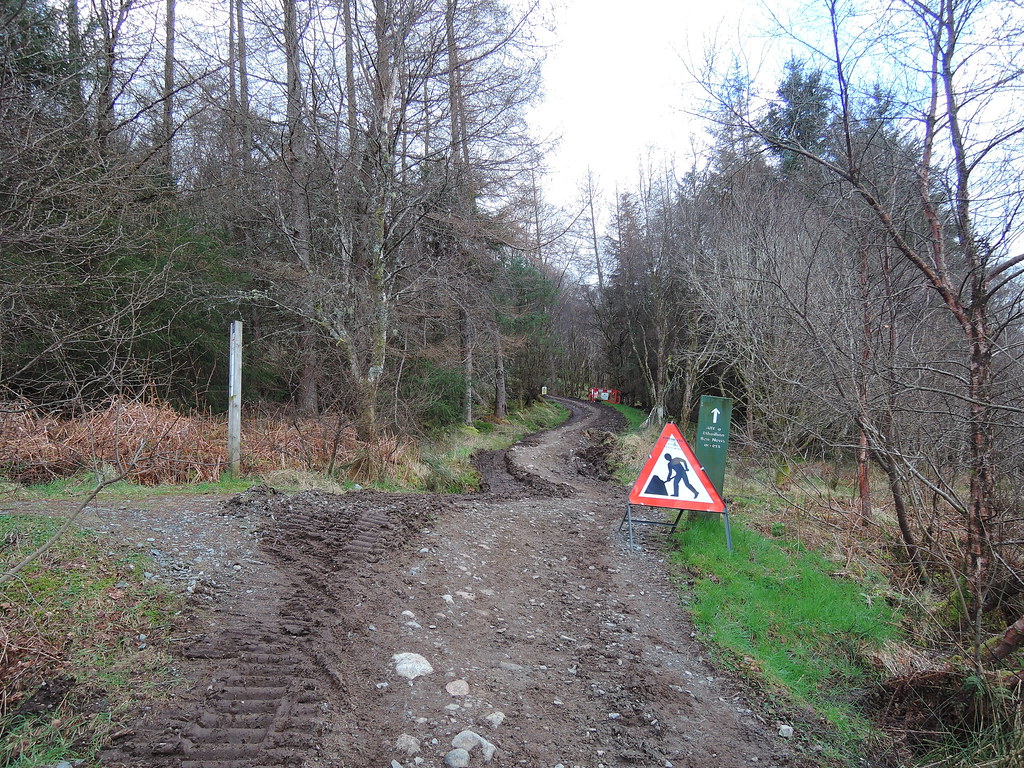 Previously I came round to cmd from the Glen Nevis car park but this way looked quicker on the map. Initial walk through the trees is well signposted for Allt a'Mhuillin, first sight of the north face: 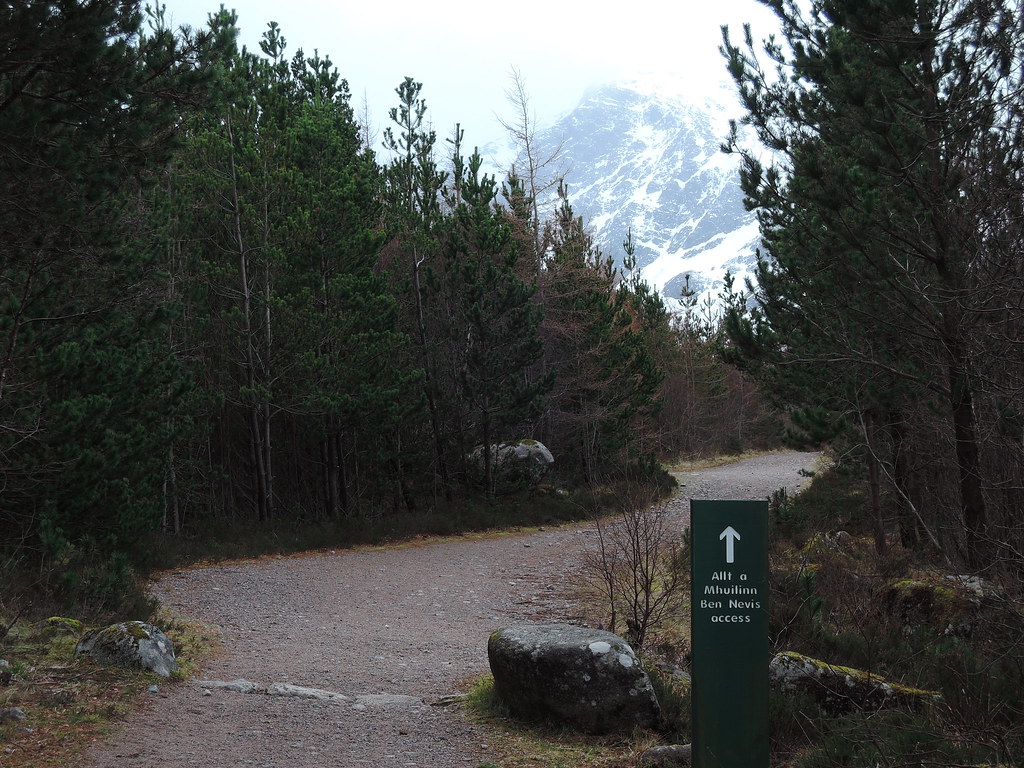 Up to the VIP car park and over the stile, good path alongside the burn initially but left this to cover boggier ground up Carn Beag Dearg. 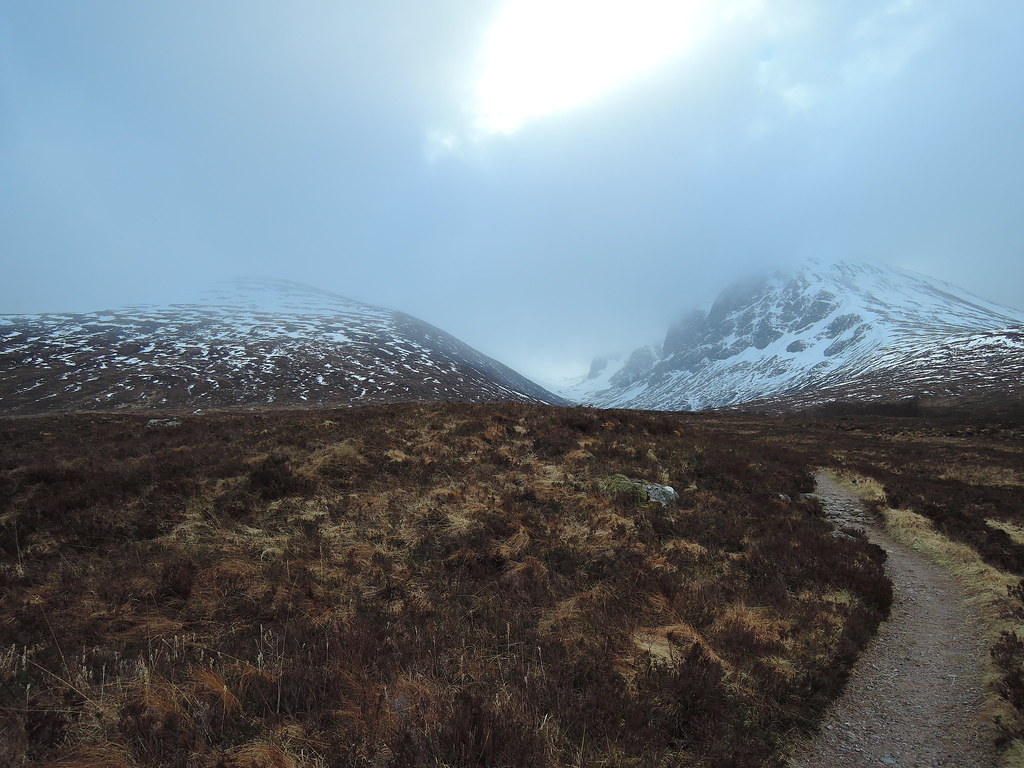 Few patches of soft snow lower down, this became more compact and easier to walk on as height was gained. Spindrift blowing about here, higher up this was being blasted in my face by swirling gusts so goggles came in handy

Over to the return route by Lochan Meall ant-Suidhe: 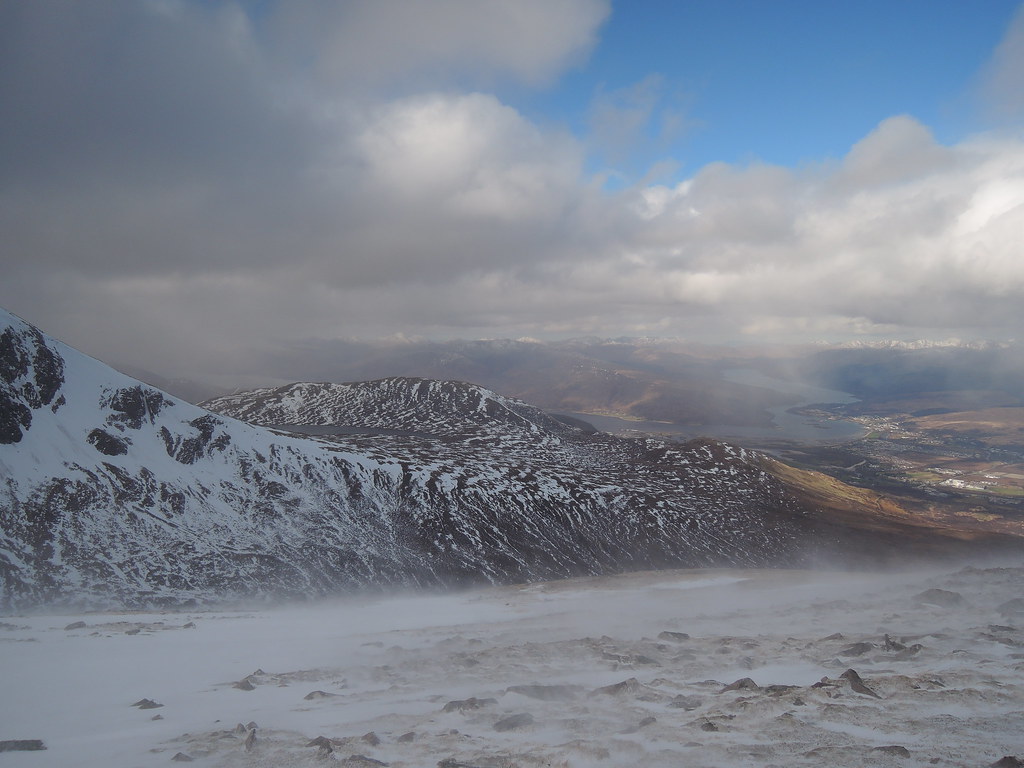 Felt like a slog going uphill but nowhere near as bad as the route up from the CIC hut. Temperature dropped and wind increased higher up, hands got cold so I swapped over to big gloves and felt the wind chill while gloves were off. Camera was also affected and the battery warning light came on after it had been out the bag for a minute. Carn Dearg Meadhonach cairn: 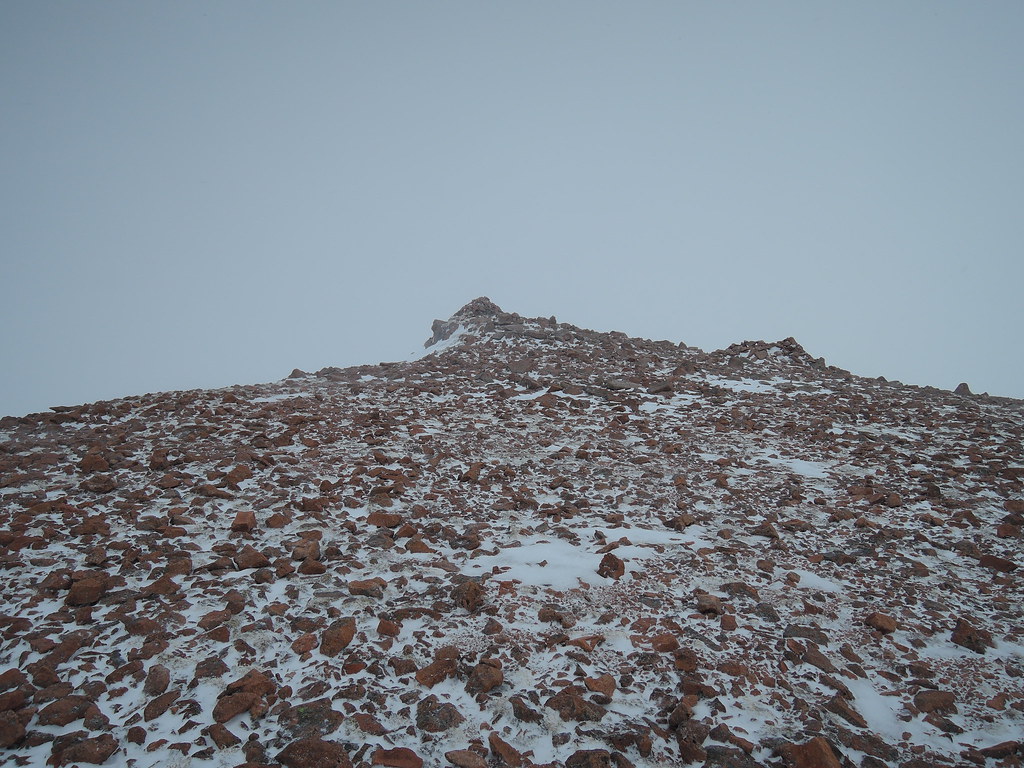 Poor visibility so I nearly took the wrong ridge down after one of the cairns, Carn Mor Dearg cairn was under snow. Wind was getting stronger so I sat on a rock for a while, hoping for a view of the Arete: 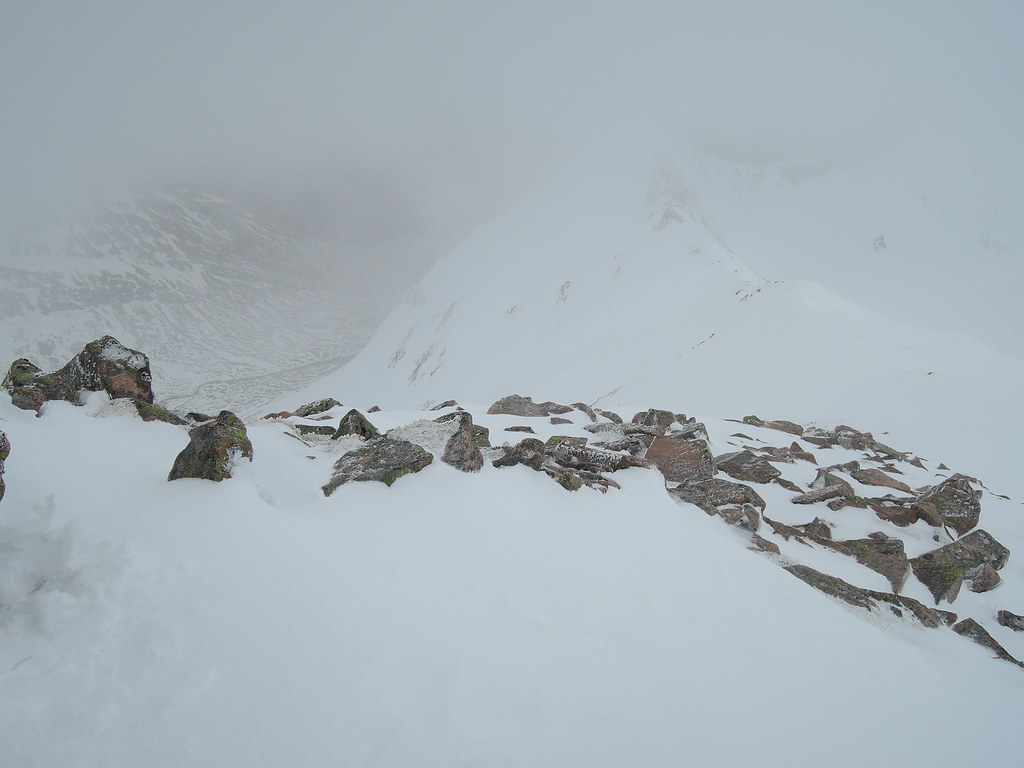 Became clearer lower down, snow was consolidated and perfect for walking. A few easy scrambles on rock were made interesting when the wind changed direction just as you were balancing on crampons 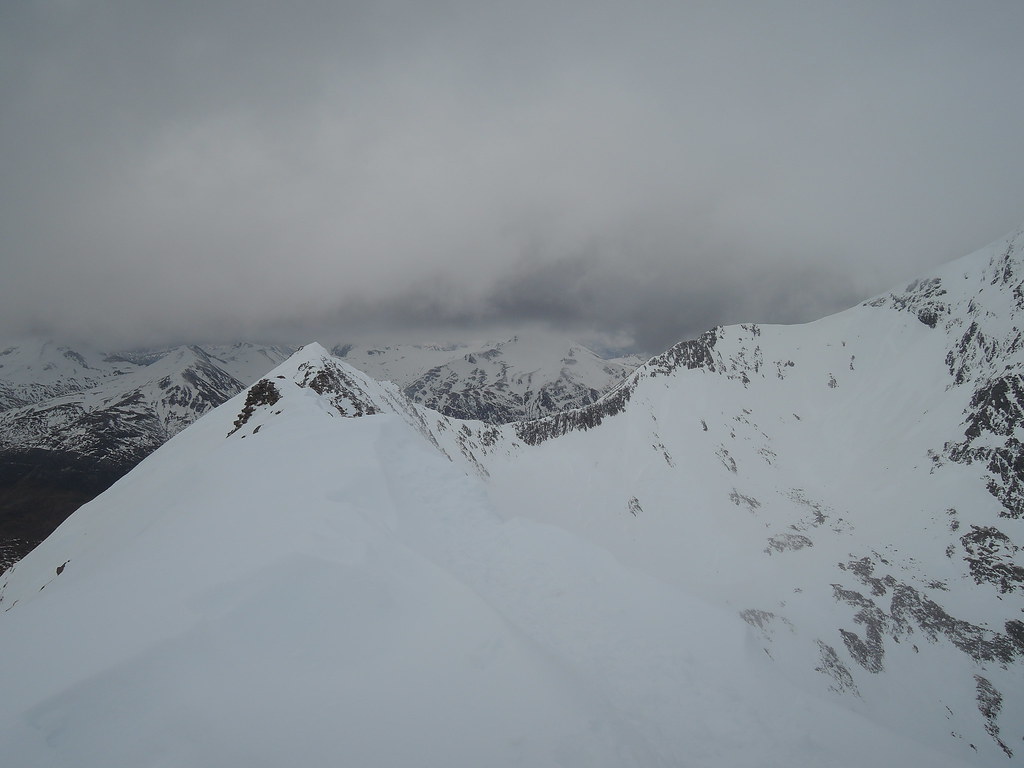 Had a seat & got some snaps when the wind was highest. 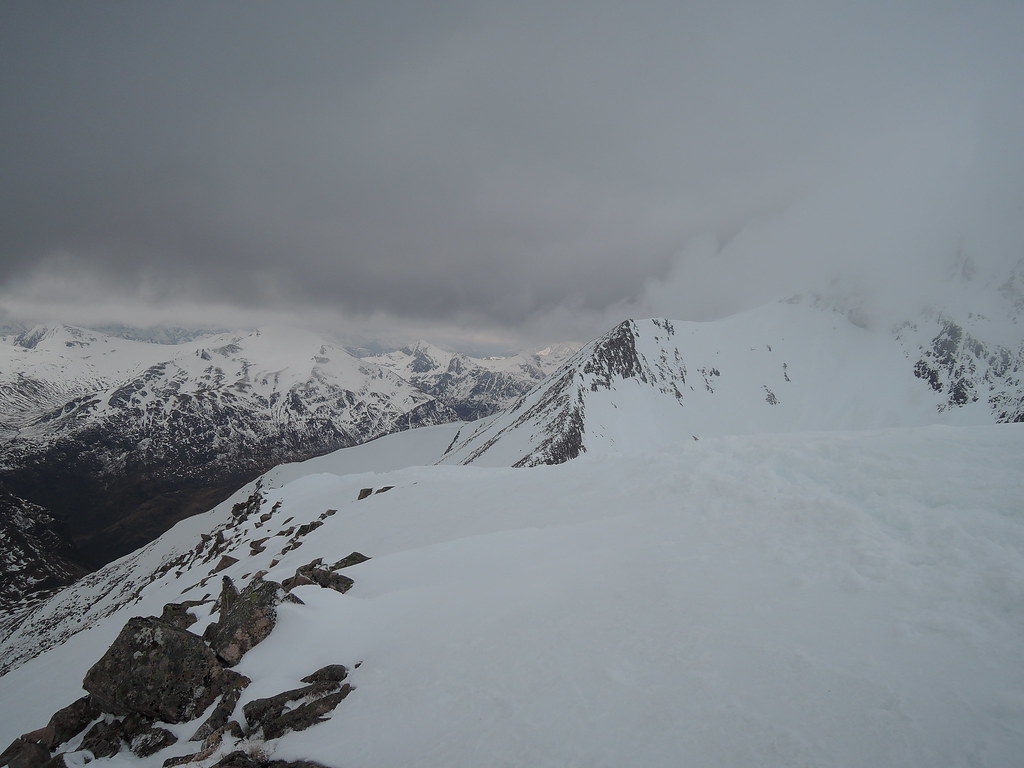 The Ben appearing out of the cloud: 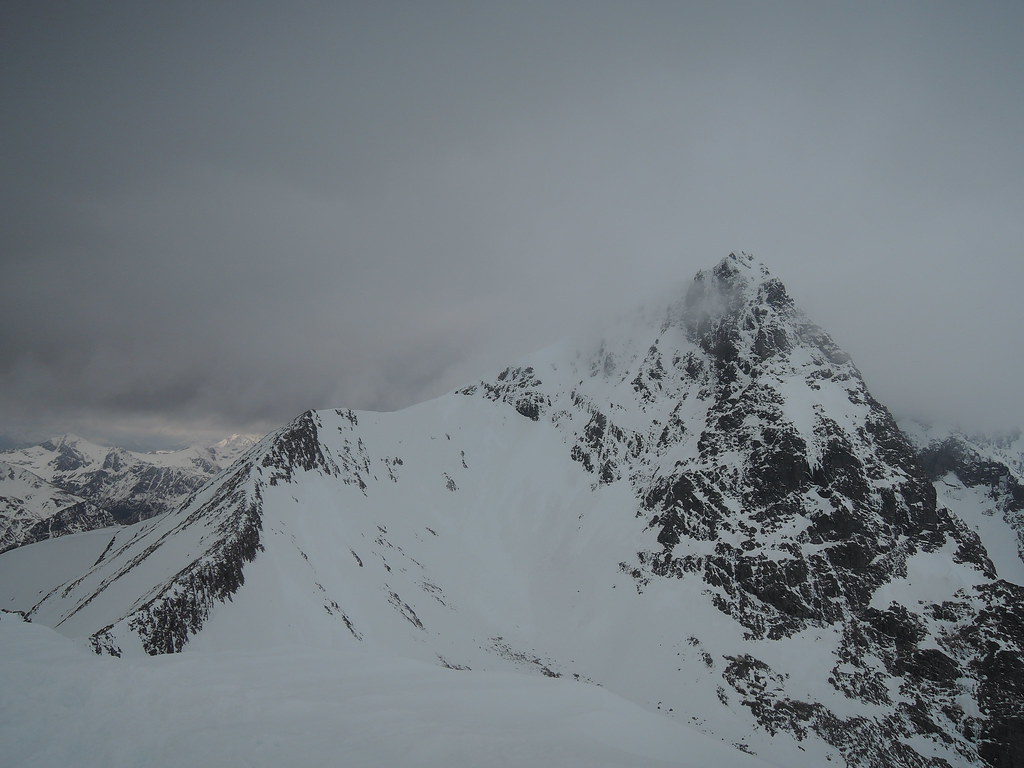 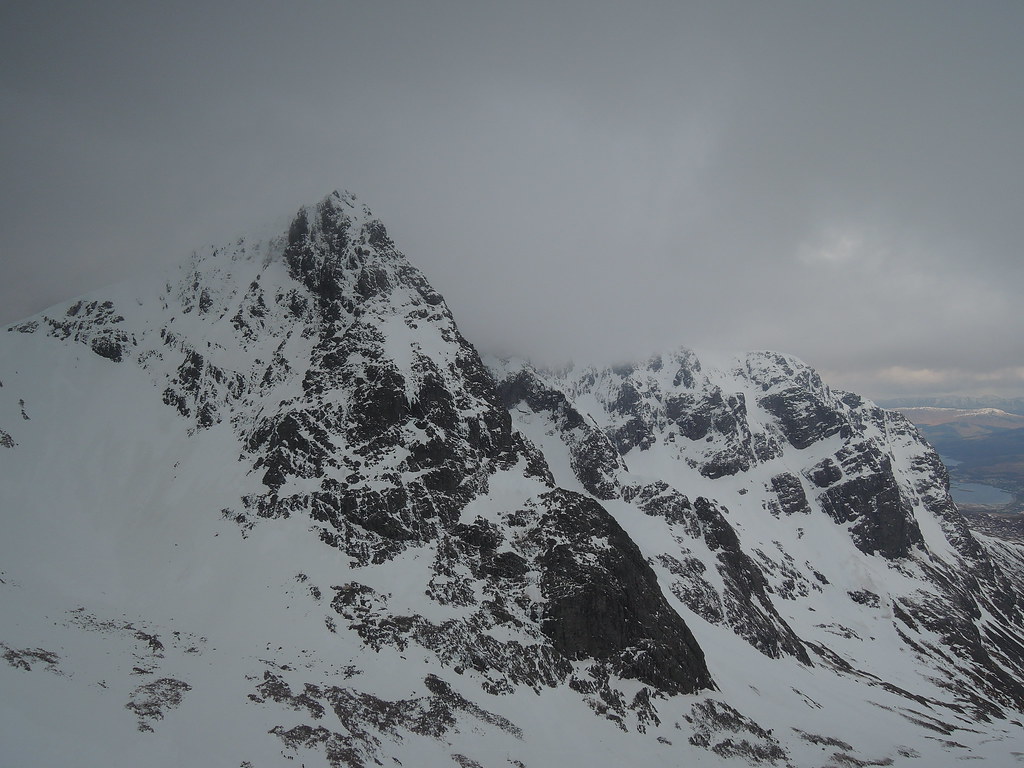 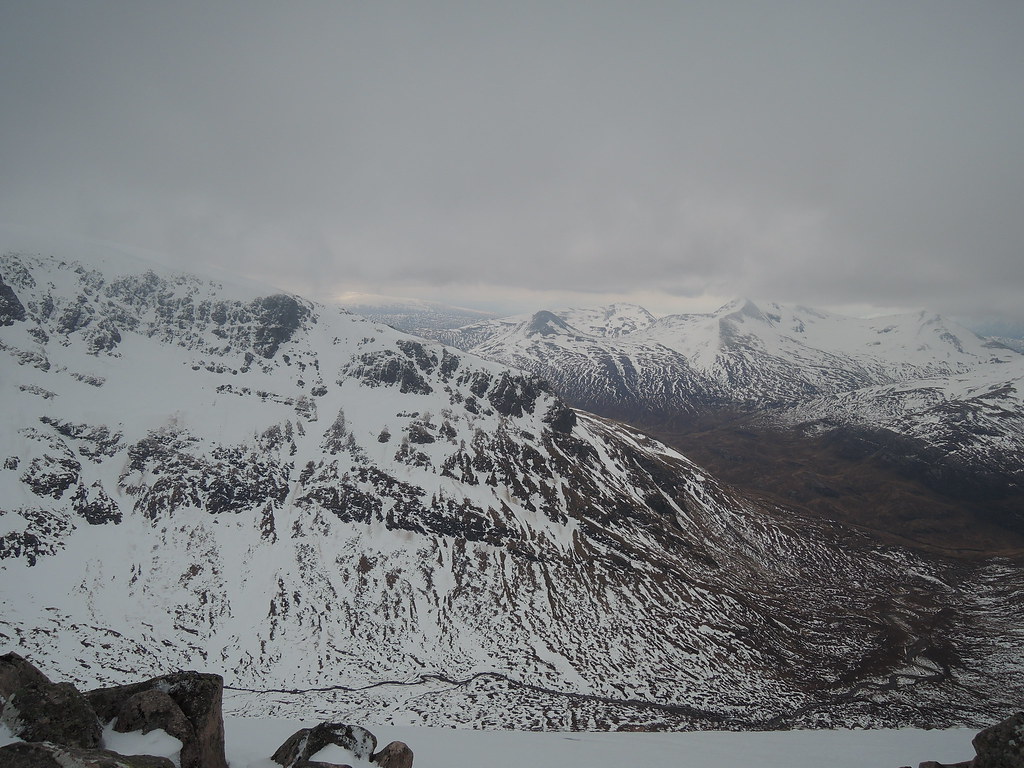 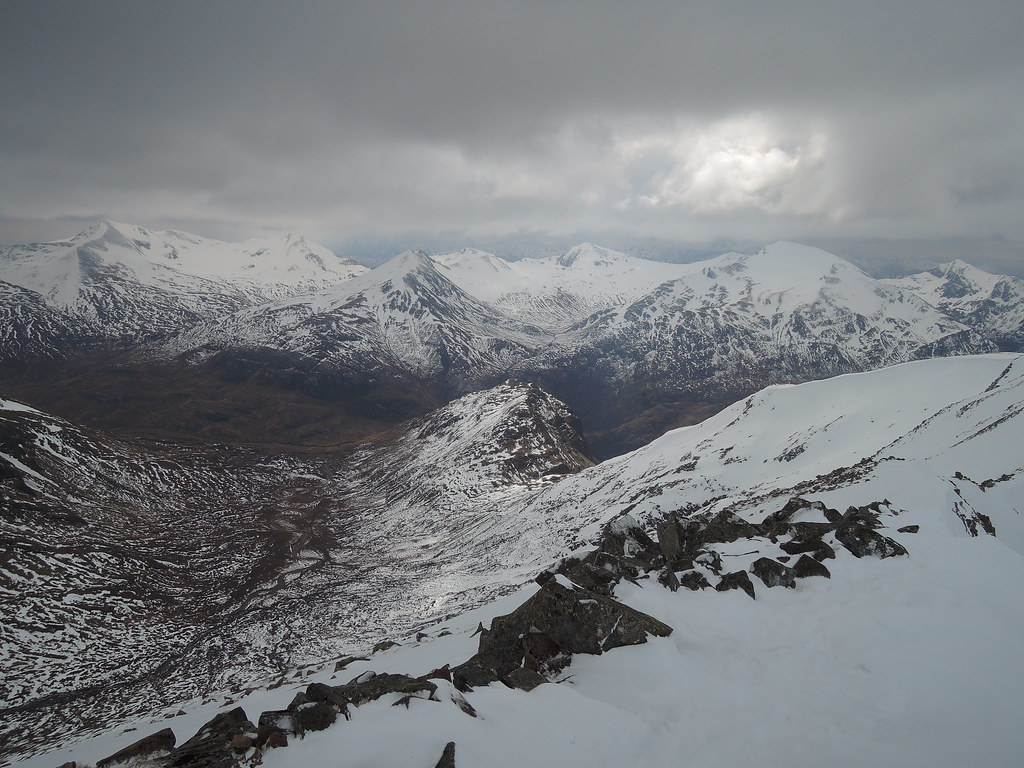 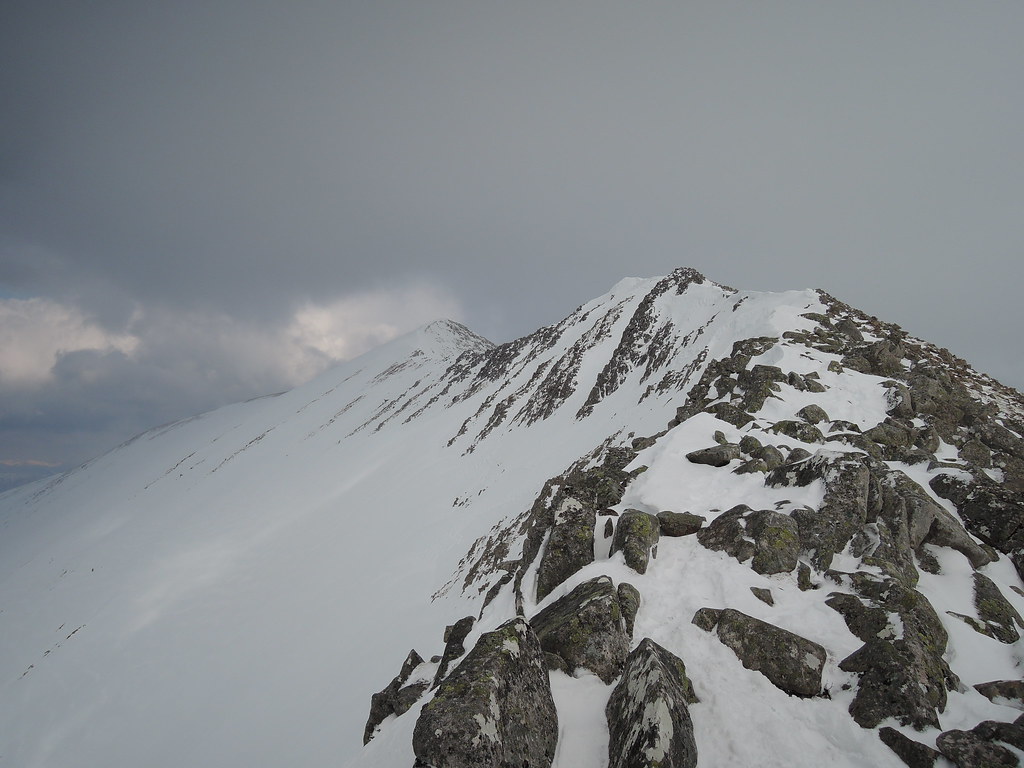 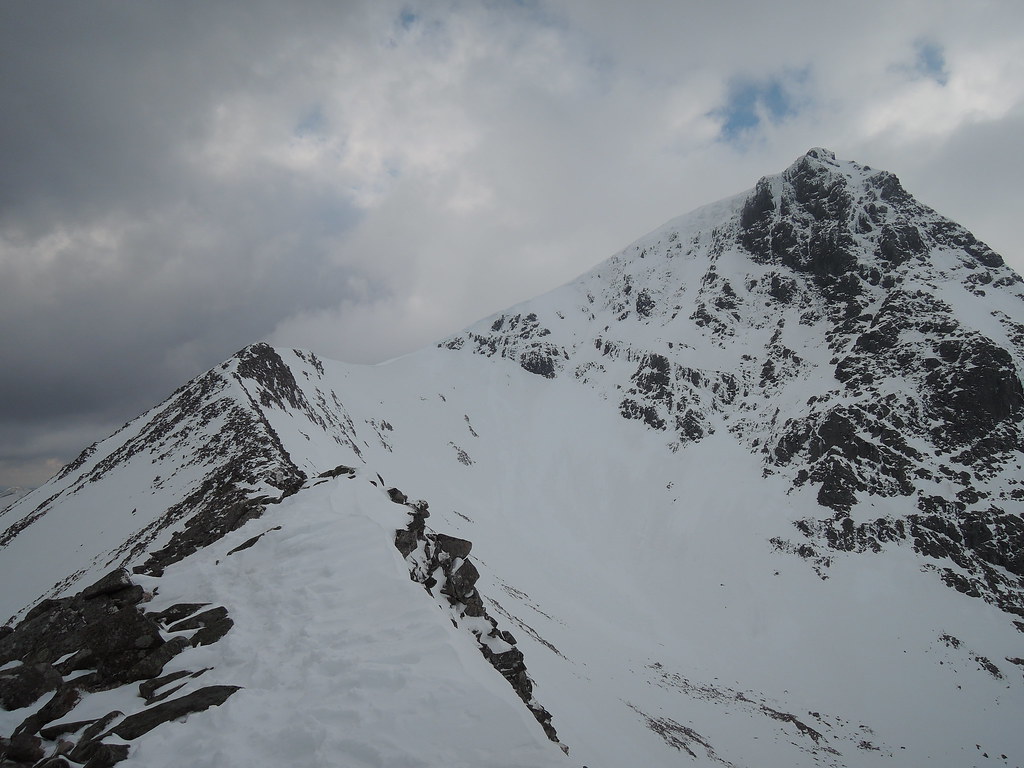 Another look back to CMD from further round this time. I noticed someone coming down from the Ben but didn't pass them, from the tracks in the snow they had traversed round the north face from roughly the point where the abseil posts used to be. 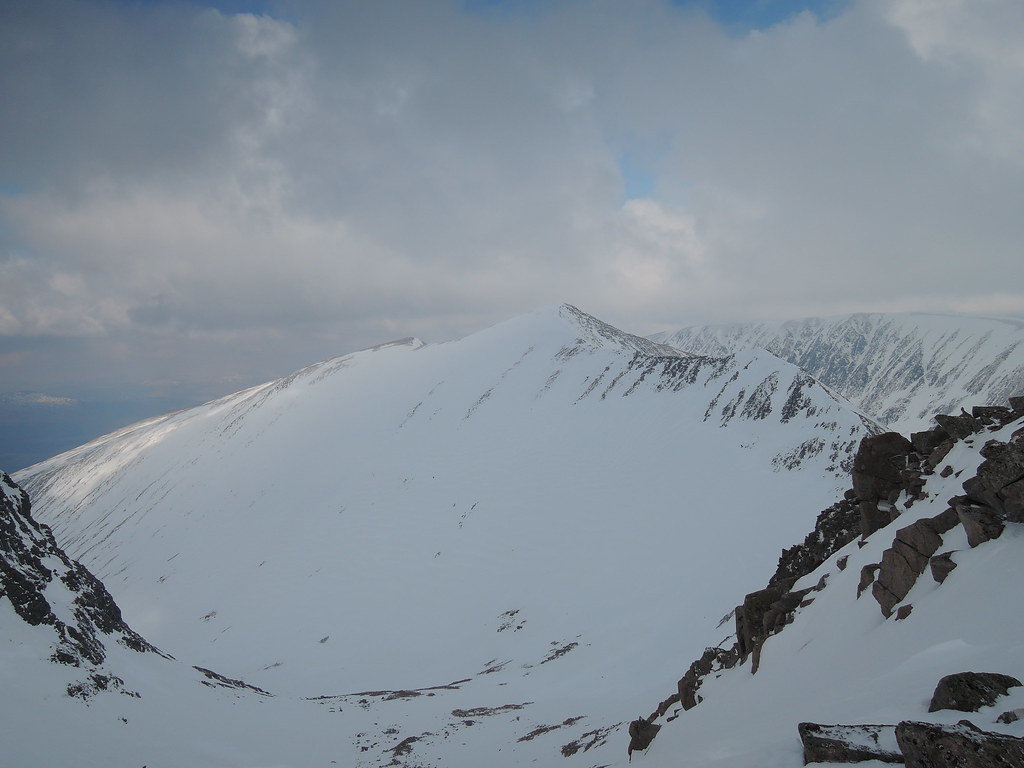 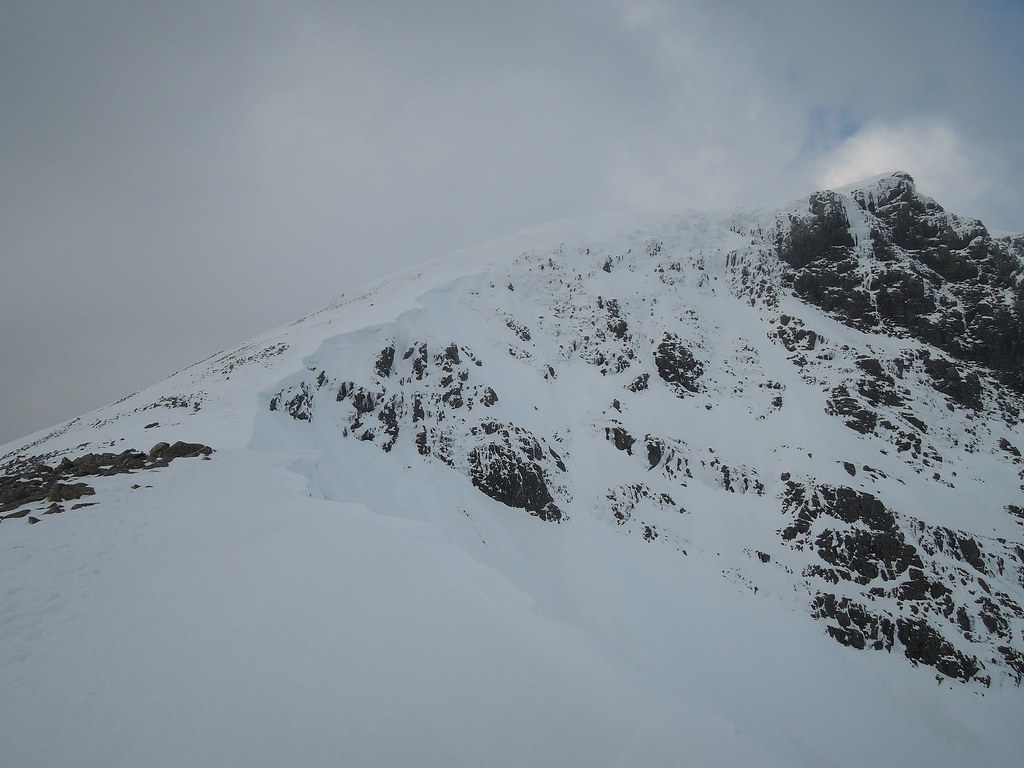 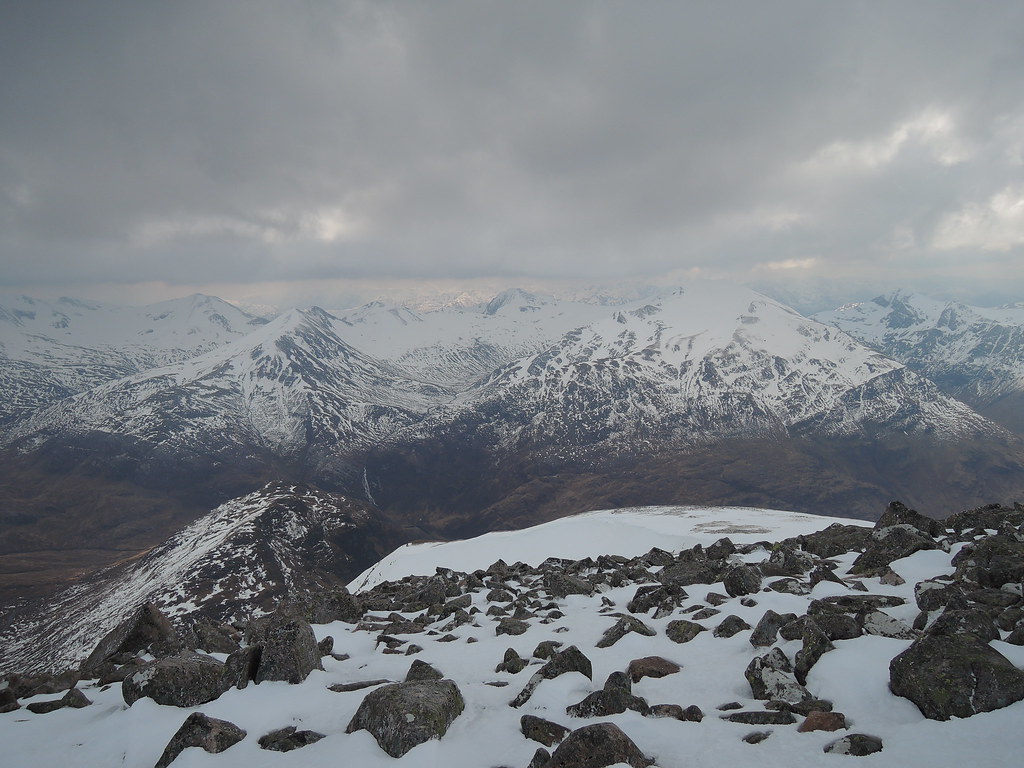 Clear at the top, so didn't need GPS to navigate in the clag. Shelter: 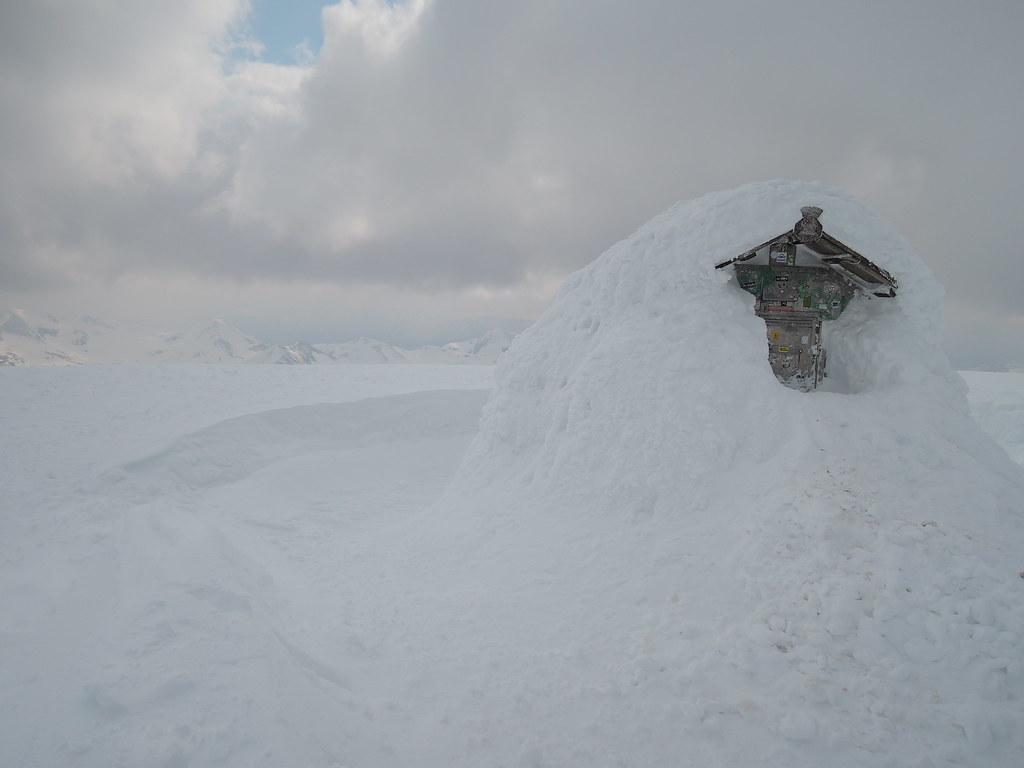 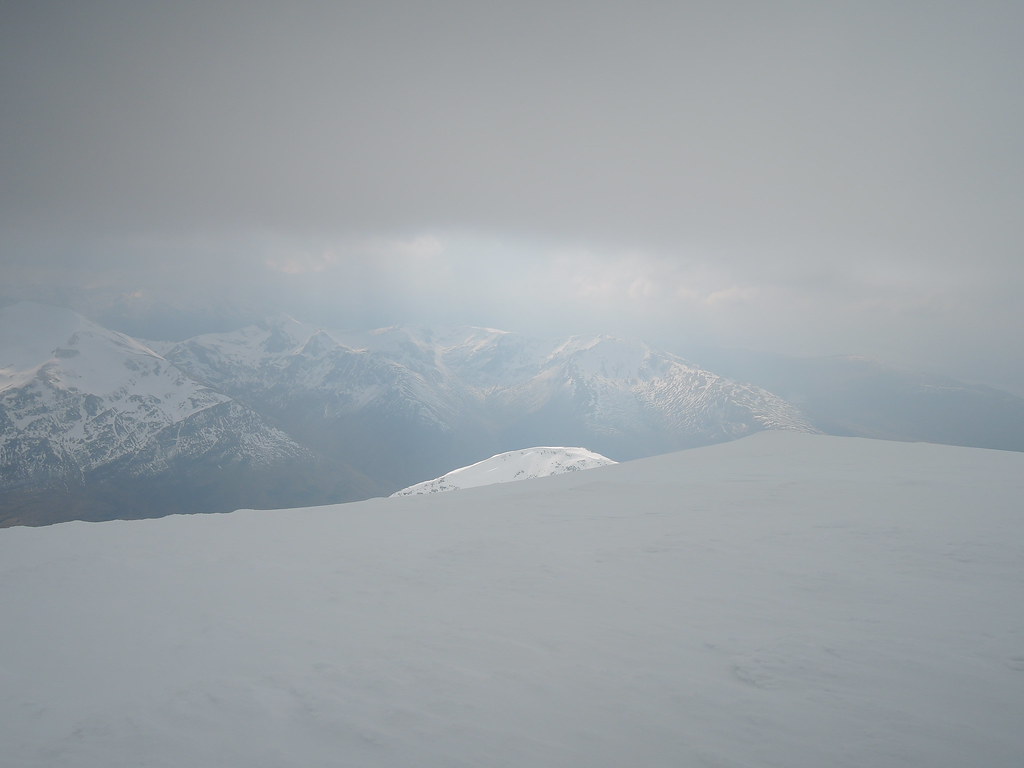 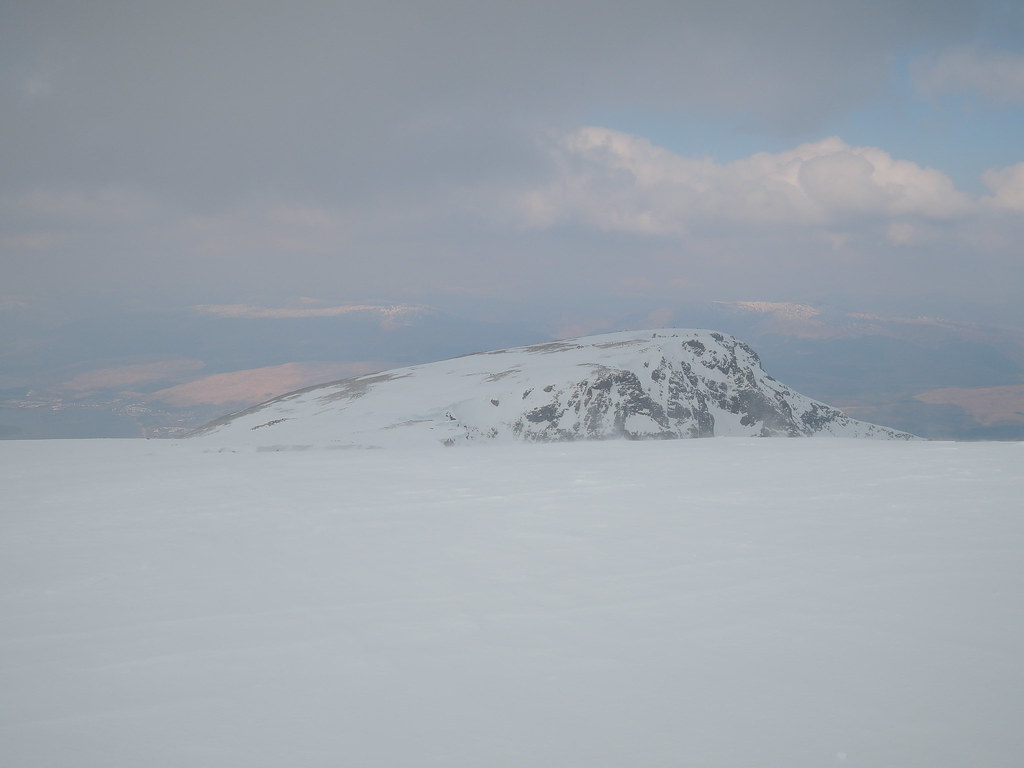 Went straight down instead of zig zagging on the path. 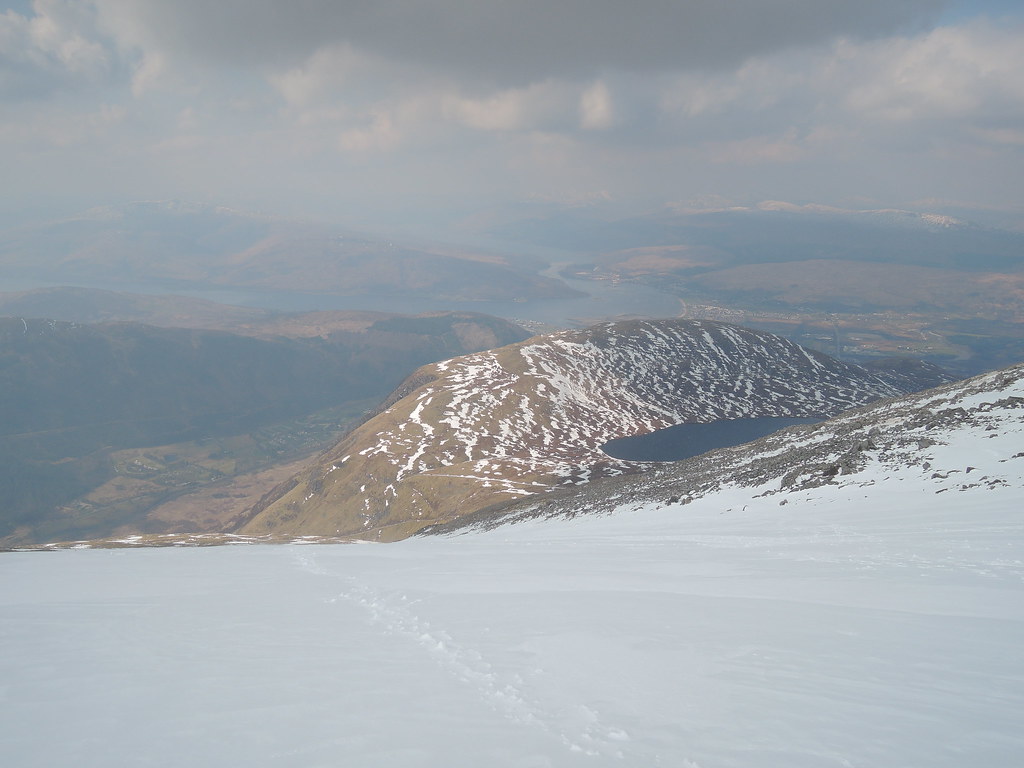 Really good path leads round to the end of the Lochan. 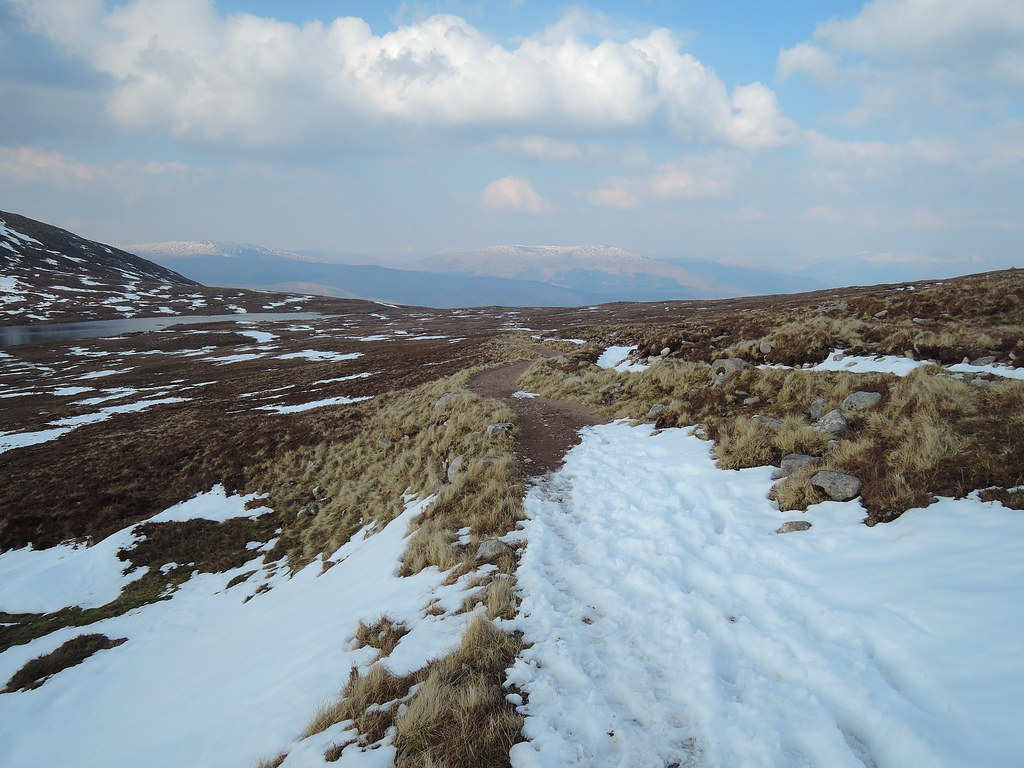 Then disappointingly disappears so it's boggy heather time down to the Allt. I decided to cross it higher up as I thought this would be easier. Nearly fell in but escaped with one wet boot. 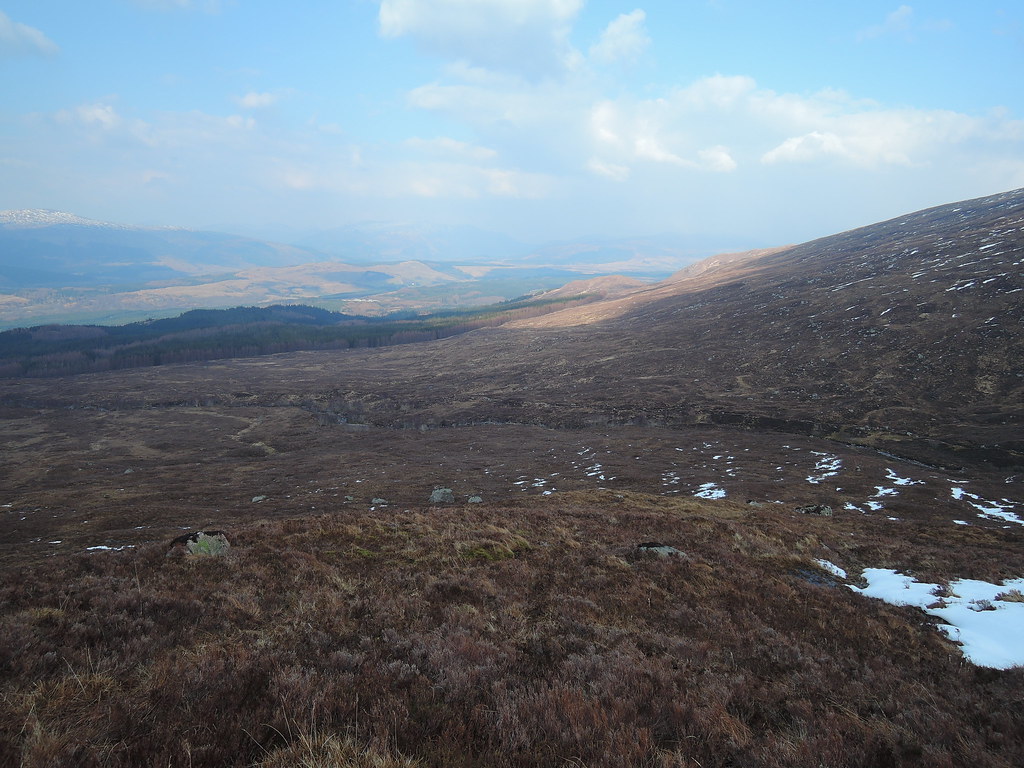 Last look back to the north face from the path. Snow's in really good condition just now, last time I was wading through knee deep powder in places so this is perfect 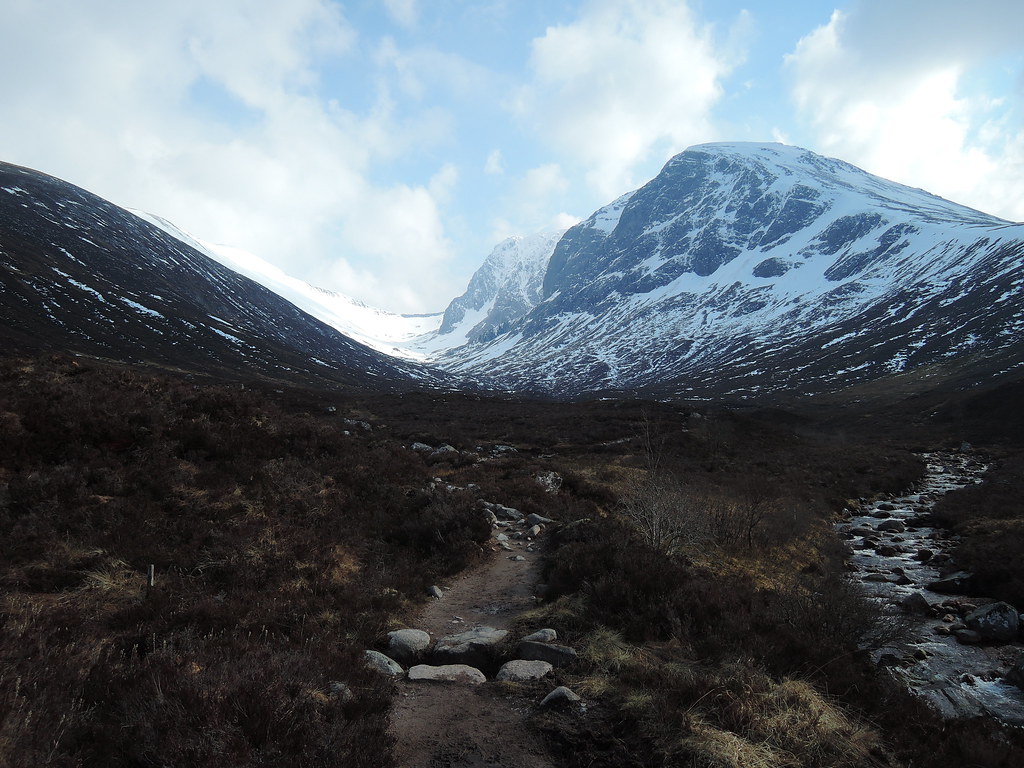 magic,just starting to feel my walking head coming back after the winter.this has put me right in the mood.

Now that's a real day out!

This is now firmly on my list for next winter. Great photos considering the weather too.
Well done.
Chris

Excellent stuff, and no sign of any tourists on the summit

Cheers, got lucky with the weather but there was a downpour at 4pm while I was driving home. A group got stuck on the summit plateau and had to be helicoptered off after dark.

The Big Ben empty and deserted... Not sure we had many reports on this route showing no people in any photos

I did Nevis but not CMD, so I would love to traverse the arete. Starting from the north face car park seems a good idea - hopefully when I get around to it, it won't be as crowded as the tourist path.

Oh I like the walk on the arete- well done for having tackled it in the snow. I had to laugh at the 'blue sky' picture...

only us hill walkers understand the hope of seeing a square inch of blue.

great report as ever, and wonderful pics - really like those north face ones.

more than decent pace there Gman, I'll 'blame' it on being part of an organised group but pretty sure it took us best part of 8 hours without having to deal with snow and crampons.

Wow, you had a great day. Inspiring pics. It seems like everywhere in the highlands was great on Saturday except around Loch Lomond!

This was somewhere on Ben Vorlich.......