Hewitts included on this walk: Pen-y-ghent


Got on the train and did Penyghent twice within one week in March. The first time was with Richard and we fancied a short walk up the Dales – as I didn’t have snow at home, we didn’t expect there’d be any further up the Dales so didn’t take any ‘tools’. As the train rolled into Horton-in-Ribblesdale station, Penyghent suddenly burst into view... and we could see it was pretty snowy! Oops! We set off anyway as the south (very steep) end looked to have thawed most of the way up... The second visit when a lot of the snow had gone...

The cafe and the shop were shut which was unfortunate but I’d had a piece of coffee cake for my brekkie on the train so I’d be okay. We marched through the village to the footpath which cuts across the field by the church... not noticing that the footpath was shut... We got to the far end and found the gate was nailed shut! Richard then mentioned he’d seen a sign at the start of the path saying something about a footpath closure! We went back across the field and that’s exactly what he had seen – I didn’t notice it at all.

A short diversion round the road past the church took us onto the correct lane which goes about ½ mile to a farm and then sets off up by the field wall. There was quite a bit of snow in the path following the wall which gave us the opportunity to see whether it was hard-frozen or grippy. At that level it was still just right – you sank in to around foot depth – perfect. 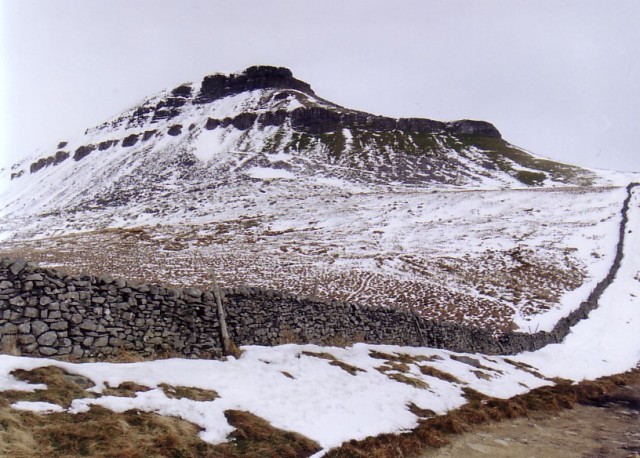 However, we found that, just before we got to where the path reaches the ridge and turns north up the southern end of the fell, it was hard-frozen with no grip. We managed to get up the end of the fell avoiding the small, hard patches of ice and frozen snow. Luckily the snow had pretty much melted off all the way to the top of the very steep clambery bit up the rocky end and onto the flatter fell top. 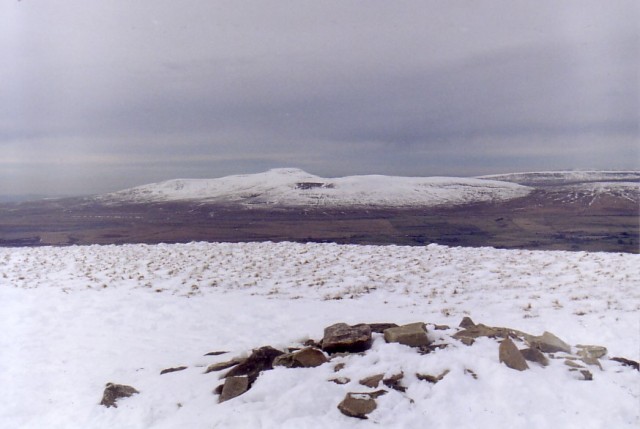 From there it was an easy stroll across the snow at the side of the hard-packed path to the summit. The summit sign-post was pretty much buried and the wall along the fell top only had its coping stones showing on the top! We thought the western flank would be pretty death-defying stuff on that much hard-packed snow so decided discretion was the better part of valour and descended the same route. A few days later I went back on my own, taking my microspikes with me... I was again surprised as the train pulled into Horton just how much snow had now gone!

I could see the western flank was still pretty plastered though so I’d probably get to use my spikes.

Same route up – cafe and shop still shut. Met an Indian guy on the top – quite an unusual occurrence in the hills really and we had a quick chat. It was a lovely sunny day but pretty cold so I couldn’t hang around long. He asked what the south end was like for snow and ice – I told him it had all gone. I asked him if he’d come up the western flank and he said he had – I asked how he’d managed as he didn’t have any spikes or crampons – he just said it had been tricky.
With that I set off down the western side of the hill for a few yards. Within a short space of time I’d nearly fallen on my bum a few times so decided it was spikey time! Once I’d donned my spikes I was off down the steepening slope seeing a lot of people who seemed to be prevaricating lower down. When I got there I saw why!

The lower part of the western flank is where the path sets off along the edge of the steep bit of the fell and traverses, descending gently, to a zig-zag back under the steep bit and away from the fell. This bit however, was completely banked out with hard-frozen, impenetrable snow – the path was pretty impossible really, even with spikes. I saw people had, and were, traversing above the path to a slightly less steep bit of hill and then trying to descend straight down from there. I followed – it was a well-used diversion!

As I caught a largish group up and started to pass them on the underside, one of them lost her grip completely and set off down towards me on her side. I stopped and let her pass – she eventually stopped, but from there, they had terrible trouble getting down the steep ice. There was a couple of guys sat below watching our progress and, as I reached them, they looked at my spikes and said they thought I’d been doing very well (no one else on the hill had anything at all). I asked them if they’d followed the path or the diversion – they said the path but had fallen off it around the banked part and continued down at a fair rate!

So that was 2 lots of people who’d fallen down the fell in around 10 minutes! Wonder how many more had that day?