In February, Richard and I took a mid-week trip to our favourite South Lakes pub, The Manor (Arms) at Broughton-in-Furness. There was plenty of snow so I’d taken full winter gear but also taken Richard’s new microspikes for him... I told him that, even if the snow was pretty serious stuff, he could still do the Dow Crag ridge as the slopes down the back are fine if you slip, unlike the other side of the ridge which is of course more or less vertical – I just told him that if he did slip, make it down the back! He didn’t look too sure...

Richard has been up onto the end of the ridge before in snow and ice but then usually turns back as ‘it isn’t his thing really’. We parked up at Torver and set off up the lane onto Torver Common heading for the Walna Scar track. It was a lovely sunny day but pretty cold. 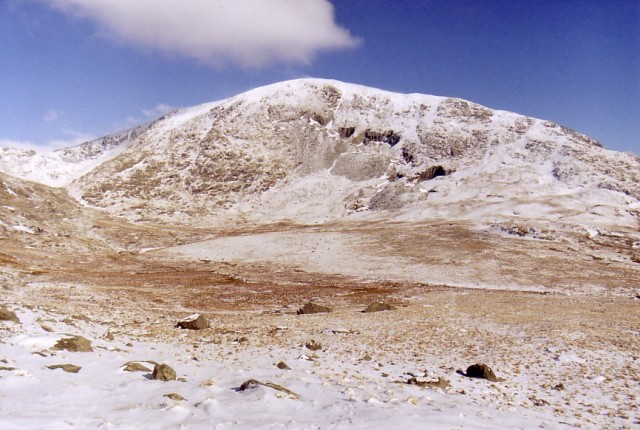 The whole of the Walna Scar track was passable without any kind of spikes to the top of the pass... just. It looked a bit harder in descent though as people were sliding around a bit and going off the path.

From the pass summit we headed off quickly up the side of Brown Pike – I say quickly as the wind was funnelling over the pass and was absolutely freezing! Half way up the slope the snow became pretty hard packed and, at that angle, I decided I wanted my microspikes and persuaded Richard he did too. We slipped them on and suddenly we were pulling well away from the others ascending the hill.

At the summit of Brown Pike the full force of the gale hit – luckily blowing away from the edge and down the back. Most people opted to walk quite a way down the back of the slope to keep out of the gale but there’s no views that side so we continued along the buried path on the ridge. I was amazed that Richard hadn’t yet turned back! Taking photos now became very painful and extremely difficult as it was hard to stand up, let alone keep the camera still! It also made Richard pretty impatient due to the severe wind chill. 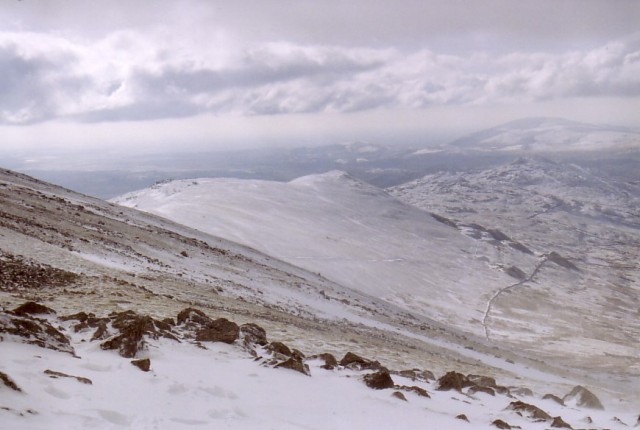 The gentle slope down the back... We ascended over Buck Pike and continued along the flat ridge to Dow Crag’s summit rocks. We always ascend and descend these on the right-hand side, above the huge vertical face, however, we decided today wasn’t the day for bravery and chose a line on the western side away from the drops. We stopped for about a second in the gale on the summit and then headed off down the western gully which splits the summit crags – we’d looked briefly at our normal route down towards the face but decided it was too hard to tell what was cornice and what was firm ground – there’s less than a foot of space to land on from the rocks. We descended to the Goats Hause col and I decided to miss out Coniston Old Man, partly due to the gale and mainly ‘cos I didn’t want to push my luck with Richard’s first proper snowy mountain walk! The descent to Goatswater is very steep and there was only us two with spikes and another guy with crampons – the others had quite a struggle to get down and again we left them well behind. We ended up walking out from the tarn with the crampon guy who was very good company until our ways diverged back on the Walna Scar track. 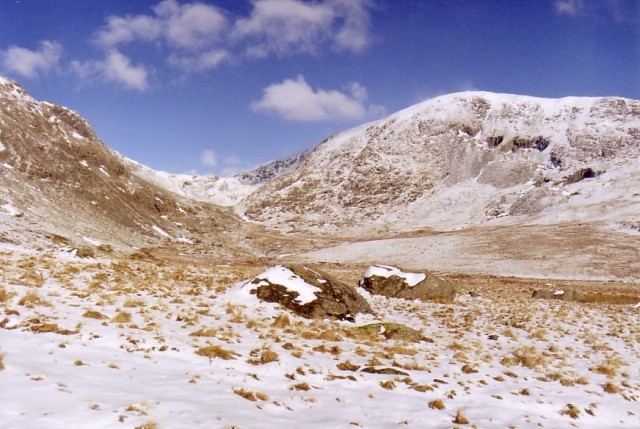 The next day I decided to go up the Miners’ Track to Coniston Old Man. I said Richard could come with me but I’d probably send him back where I did last year (due to the icy conditions) around Low Water. We met quite a few awkwardly icy patches on the way up to Low Water and I advised Richard to don his spikes before descending those on the way back down. However, when we got to Low Water, he said he wanted to see how far he could get up the mountain so continued but we put our microspikes on. I warned him that round the corner, after the first couple of zig-zags, the mountainside got exceedingly steep indeed and, being north-facing, would probably become too dangerous without crampons and ice axe. We noticed that someone had skiied straight across the lake!

We got to the foot of the very steep slope and I swapped my microspikes for the real thing – crampons and ice axe, and advised Richard he would be best to go back down. However, he still said he wanted to see how far he could get. I frowned a bit but it wasn’t my decision... While I was swapping into my crampons, another guy caught us up and asked if I thought he’d need crampons as he didn’t have any. I said I wouldn’t fancy the rest of the ascent with nothing but that Richard was giving it a try in microspikes and did he want to borrow mine? He accepted and we continued up.

We set off up the near-vertical stuff and I was watching the pair of them with some trepidation... they didn’t look too happy and were struggling but continued anyway. Further up there is a flatter but slightly longer route round a small quarry so I sent them that way. This was the point where my camera’s film decided it was no longer going to stop at each frame but just keep going round and round! Never happened before... I decided I’d best change the film (but when I got back found the last few photos were overlaid and so useless). The two guys were waiting above on a flat section... Taken on a different day due to film problems!

We then turned to ascend the final steep climb (about 500 feet) up the western slope to the summit. There was mixed snow on this slope – some was quite deep but collapsing – the 2 guys, to my consternation, went for this. It was very near the edge and I was worried it would just give way and dump them over it – they were going up using rocky islands but there was quite a way between each one. As they had no ice axes I was pretty worried and they looked pretty worried too! As I had crampons, I went for the really hard-packed stuff and just stomped up it, ice axe at the ready. I realised I was really enjoying this bit and didn’t want it to end... I did wish however that the other two would get themselves up onto the flatter bit near the summit so I could just enjoy myself without having to stress.

Unfortunately, soon we’d reached the flatter bit and just had the final few yards to the summit. I congratulated them both on their persistence and courage and we continued to the cairn. It was absolutely freezing with yet more strong wind and its attendant severe chill so we didn’t stay more than a minute or so.

I led off along the ridge... this was the point where I realised it was high time I bought some goggles! There was a huge amount of spindrift and the icy particles bombarding my face meant I couldn’t keep my eyes open. As we were doing a section of ridge right next to a cornice, we thought we’d best head off down the back slightly. Taken on another day without the spindrift!

We were soon above the path down the back to Goats Hause - even though I couldn’t see at all, I knew when we got to it as that was the hard-packed bit. We quickly descended without incident to the col and then down the steep bit to Goats Water (again). I thought it had thawed quite a bit since the day before... 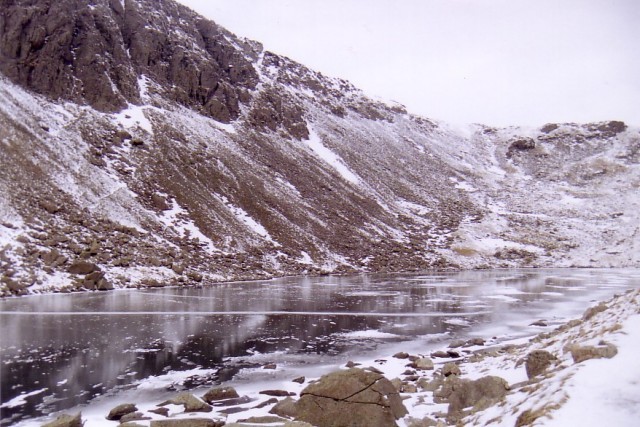 We stopped for a short break in a sheltered spot just along from the lake and sat in the sun eating malt loaf and drinking tea and coffee –at this point I collected my now redundant spikes. We then walked the guy back to Coniston Village – as he hadn’t ever been down the back of the Old Man to Goatswater it was a bit like a mystery tour for him. So now he knows a new route!

Great area and nice pics. I did Coniston on Easter Sunday (see report). There was hardly any snow left but bitterly cold high winds made for a miserable first couple of hours or so. Things improved as the day went on.

High MC,
Great pictures. Allmost feel like your in Scotland

This winter in the Lakes again, like last winter, almost felt like we were in Scotland. The great thing is that I can practice my winter skills much more effectively there as, because I know the mountains there so well (especially 'The Connies), I have a lot more confidence so will try steeper and harder stuff