A week around Tilt and Drumochter

A week around Tilt and Drumochter


On a damp, grey Sunday morning I left Yorkshire, and drove over the Pass of Drumochter to arrive at Cuaich in sunshine, albeit cold and windy.

I set off on an afternoon stroll up Meall Chuaich, with avalanche debris visible on the northern slopes of the Carn na Caim range. At the summit there was strong wind and drifting snow, but excellent views as well. The descent was accompanied by nice views in front of Loch Ericht and the Alder range. Then I drove back over the pass to Blair Atholl, and the first of seven nights at the Bridge of Tilt Hotel.

It was another fine day as I made the pleasant, long walk along Glen Tilt. The glen was sheltered and quite warm, but as I ascended I could see drifting snow being blown over the tops of Beinn a' Ghlo, suggesting things were more lively higher up.

On Carn a' Chlamain's summit, again there was plenty of wind but fine views. Then I descended back towards the glen... ...ready to walk out to Old Bridge of Tilt.

I'd attempted this walk the previous day, but turned back in a white-out. The postponement proved worthwhile, as another fine day followed.

En route I encountered two other walkers: first Ian from Fife (left in the photo), and later Bob from Birmingham (right). Ian and I agreed to complete the walk together, and we were to meet Bob again, more than once. First we moved onto A' Bhuidheanach Bheag, where only the top few cm of the trig column were poking above the snow. Then we 'made sure' by visiting the twin 936 metre top, with a view across to the Druim Uachdair hills. We headed north to reach Carn na Caim, looking over to the Monadh Ruadh. As Ian and I were leaving the summit, Bob arrived, admitting he was a little out of breath. He'd had cancer twice, and his red blood cells still weren't carrying oxygen efficiently. His achievement seemed even more remarkable when he told us he'd left Birmingham at 3 o'clock am earlier in the week to drive to Loch Earn, and climbed a snowy Ben Vorlich and Stuc a' Chroin the same day.

It was cloudy and windy when I parked at Balsporran Cottages, ready to take on the four Druim Uachdair Munros. On the way up, I met a Glaswegian coming down. He'd climbed two of the mountains, then turned back due to the conditions. I carried on to Geal-charn's summit through thick clag, fierce wind, stinging hail and horizontal snow. One hill was enough for that day, I decided.

Back at Balsporran, the weather was promising a better day. Now having this range left to complete as a group of three, the opportunity presented itself to climb A' Mharconaich from the NE via its nose. This was a route which would do justice to the mountain.

One or two hares were running around on the lower slopes. This proved to be an impressive ascent. I moved round towards Beinn Udlamain, looking down to Loch Ericht along the way. 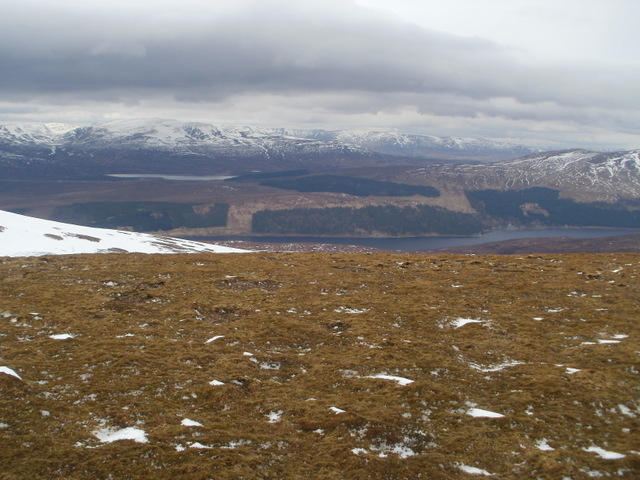 On top of Beinn Udlamain, I was only just below the cloud. Moving south off the summit, I entered the mist, but the stony ground prevented a white-out. On reaching the bealach en route to Sgairneach Mhor, I'd dropped back out of the cloud, which then cleared from the summits again, and stayed off.

On reaching the day's last Munro, I met a couple of snowboarders. What I didn't encounter was the trig point which supposedly stands here; it was totally buried by snow. I began to descend, and was soon overtaken at speed by the hill's other two visitors. Then I dropped to the track which led out to the top of the Pass of Drumochter, and walked back along the cycle track to Balsporran.

Very low cloud was forecast for my last full day around Blair Atholl, and it was a grey morning as I set off on a long walk out over moorland from Old Bridge of Tilt. However, conditions were dry and this rambling section was enjoyable. When I reached the Allt Scheicheachan bothy, the weather wasn't looking too bad, and the clouds were moving higher. 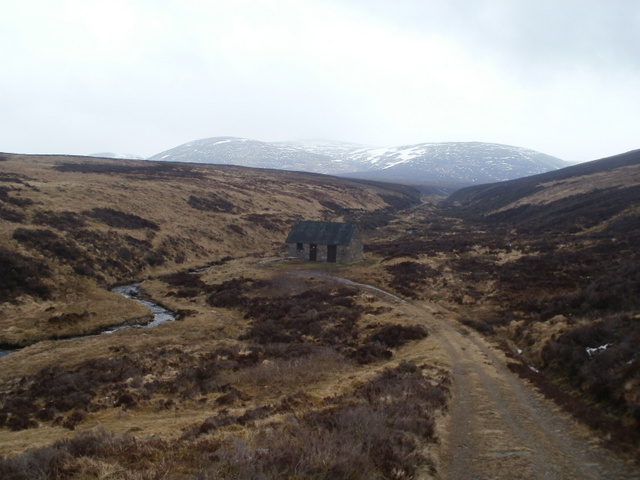 The burn was crossed easily despite melting snow on the hills, and I began ascending. As I approached Beinn Dearg, the summit was in and out of the clouds. I reached the trig point and shelter in mist, but brief clearances kept giving glimpses of summit views. Munro number 123 in the bag, I returned to Old Bridge of Tilt the same way. Then it was back to the hotel for my last night.

Next morning I handed my key in to Tina from the hotel, who'd been an excellent hostess all week. She presented me with the bill - considering that I'd eaten there and had drinks every night, I think she must have given me a generous discount. So I set off for the drive south. This time it was Eastern Scotland's turn for a damp, grey Sunday morning. I later passed the Solway Firth to cross into a sunny Northern England.

Ooh, that is a very handy report for me, very timely. I’m planning to do these hills in a few months’ time. Enjoyed reading that! Nice pictures too!

Well you've certainly been pretty busy !
Looks like you picked one of the best weeks weatherwise of the whole winter and made the best of it.
It's great when a plan comes together like this - a week you'll no doubt remember for a long time - cheers

Thanks, Silverhill, I hope the report proves useful. When you get there, the 'redecoration' of the Pass of Drumochter with a new line of huge pylons should be complete.

Cheers, rockhopper. Even the bad weather days gave valuable lessons, and those days of sunlit, snow-covered mountains made me really glad I was there that week.