Wednesday March 26th 2014 - Oykel Bridge to Inchnadamph. Dep Oykel Bridge Hotel 0850, arrive at the main road at Inchnadamph at 1620. Distance 19.5 miles, time taken 7 hours 30 minutes. OS Landranger map 16 covers the first couple of Kilometres, but the vast majority of today's walk is covered on OS Landranger Map 15. Cloudy and dull to start with but cleared by late morning, rest of the day spent walking under a beautiful blue sky with superb visibility.

Good track to start, becomes a faint but visible and rather damp path alongside the River Oykel then good track again to beyond Benmore Lodge. That track continues on from Benmore Lodge and eventually runs out in Glen Oykel. However a faint path, visible in places, invisible in others, runs on from that track. I was able to follow this faint path most of the way up Glen Oykel, this path, like so many others, being a tad moist underfoot in places. Good descent down to the floor of the Glen then a sweaty scramble up to the Bealach between Conival and Breabag. A good path starts from the belach and contours round the West side of Conival, from where you drop down, cross the River Traligill, and pick up another good path (the Munro Path) that takes you from there to the road at Inchnadamph. Note: There are several river crossings between Oykel Bridge and Inchnadamph which could be challenging in bad weather.

Refreshed after a good night's sleep in the Oykel Bridge Hotel, and fortified by a healthy breakfast, I was on my way by 0850. Exit the hotel and turn left, walk a short distance, take the track to the left, cross the old bridge over the Oykel, and turn turn left onto the main track. Stay on this excellent track/road all the way to Salachy, don't detour off. 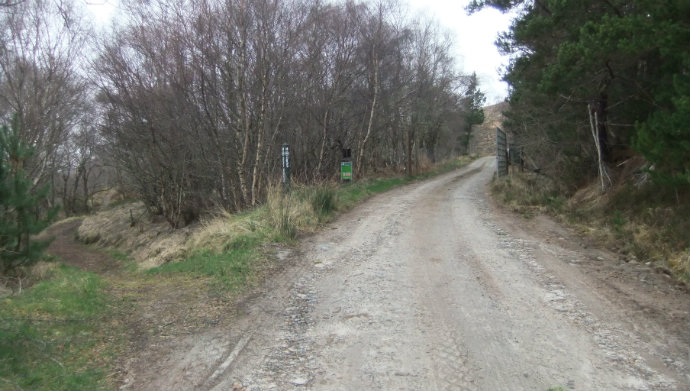 Track from Oykel Bridge that takes you upstream

From here to Salachy, this is very easy walking. River Oykel is below you to your left. Lots of timber has been harvested on the hills to your right. Good views up Glen Oykel.
Arrived at the Caplich Estate gate at 0930. 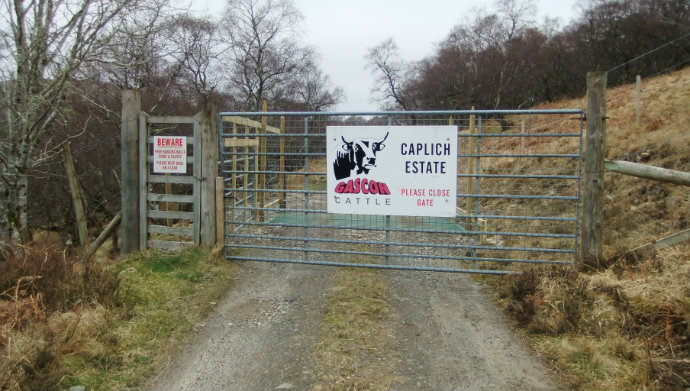 Gateway to the Caplich Estate. Beware the free ranging Bulls!

Sign makes for interesting reading, advising you that their Cattle are roaming free. I didn't encounter any of them but you may want to keep an eye out for them!
By 1015 I'd arrived at grid reference 341052 where the road crosses the Allt Rugaidh Bheag. The track now runs alongside the river until Salachy. The sound of the running water felt quite therapeutic.
By 1040 I'd arrived at the point wheer Salachy is marked on the OS Map. I couldn't see any sign of a house, ruined or otherwise, where Salachy is shown on the OS map. There was a wall, perhaps this is all that remains? 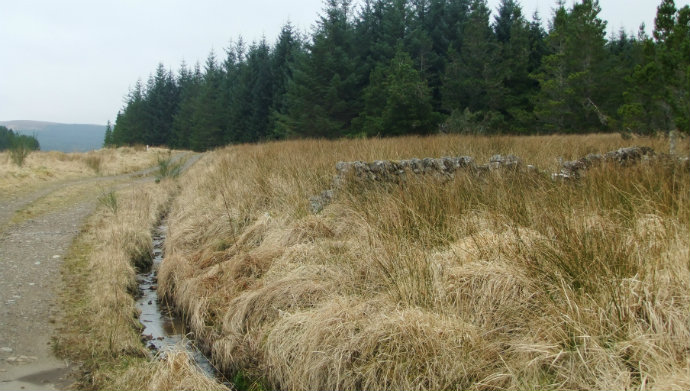 I had to make a decision here; head up the hill, through a narrow clearing in the trees just after the "Salachy Wall", towards the forestry track shown on the OS map or follow the track NW alongside the River Oykel. There was a clearing just after the "Salachy wall " but no obvious path leading uphill to the forestry track so I continued on the good track running alongside the River Oykel. 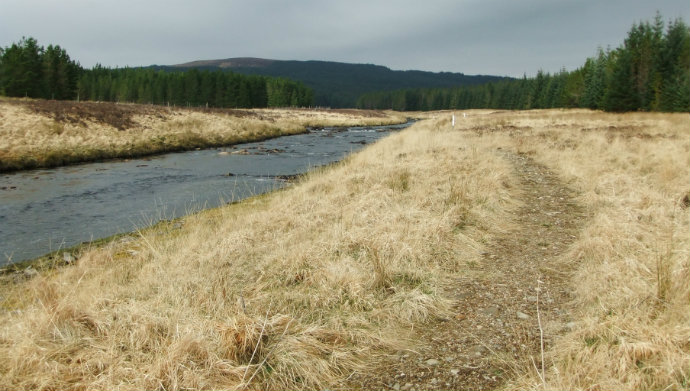 Path as it runs alongside the River Oykel after Salachy

The excellent, easy to follow, track finished about 15 minutes after leaving the "Salachy Wall," just before the point where the Allt Eileag meets the River Oykel about grid reference 324075.
From here a rough, but obvious and easy to follow path followed the river but this was damp underfoot in quite a few places. Mind, after walking on hard surfaces yesterday and this morning, this was no great hardship, indeed my feet appreciated the softer going!
At around grid reference 318092, I turned right, away from the Oykel, and followed a path the short distance uphill to the forestry track. I then followed the forestry track down to Loch Ailsh where it meets the road that leads to Benmore Lodge. 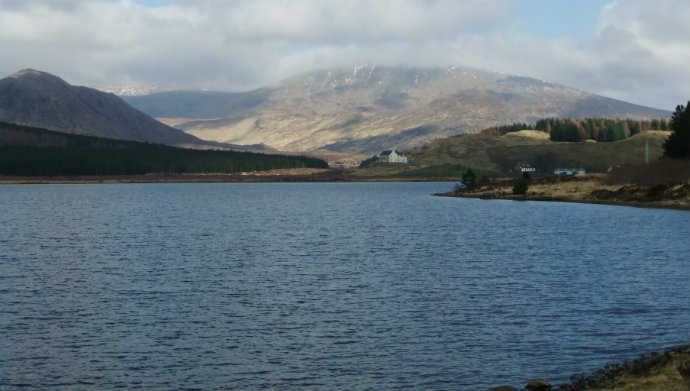 I turned right here and followed this road, shown on the OS map, along Loch Ailsh to Benmore Lodge which I reached at 12 noon. Some great views from here back down Loch Ailsh.
The track continues below Benmore Lodge and heads upstream; the River Oykel below you on your left and trees on your right.
Follow this track up to the point where the Allt Sail an Ruathair joins the Oykel, about a 20 minute walk from Benmore Lodge. Cross over the footbridge and turn left back down to the Oykel. If you turn right after crossing the footbridge ie going away from the Oykel, you're on the less well travelled, remote path to Glencoul. 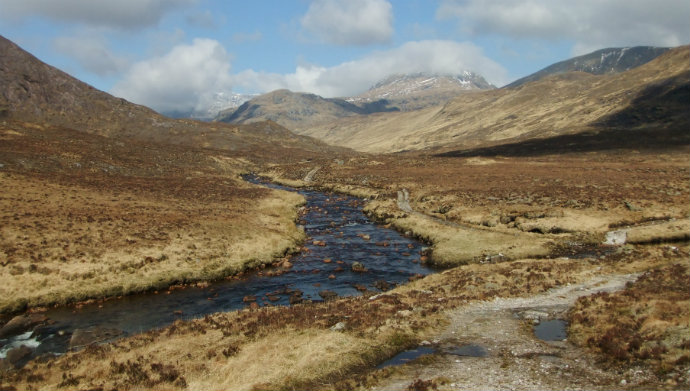 I continued to follow the Oykel upstream. At this point the track is still excellent and I was rewarded with fantastic views of Conival in the distance. 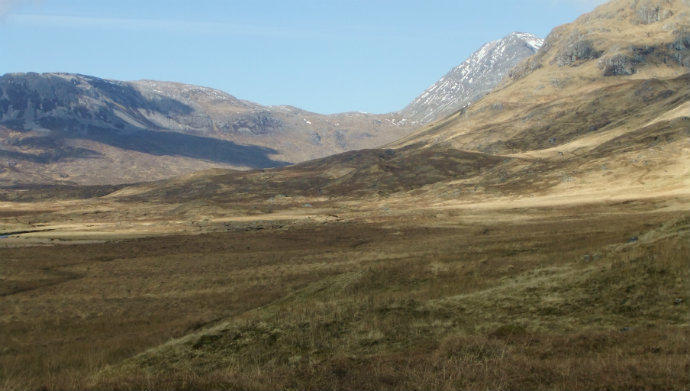 After about 25-30 minutes the track peters out and becomes a rough path that appears and disappears as you head up the Glen towards Conival. At this point, about 1250, I stopped for some lunch, checked the map and considered the best way to proceed to the head of the Glen and up onto the Bealach between Conival and Breabag.
I was lucky as visibility was excellent, so working out a route was no real problem. However, I'd imagine this stretch up the glen, on a faint path, could be challenging in bad weather, especially as there are several streams to cross. 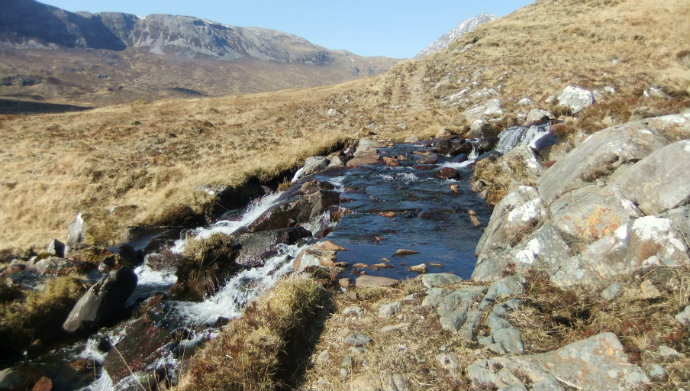 Another River to cross

I continued up the Glen, following the path as best I could. As said above, the path would appear then disappear but given the great weather navigation was no real problem. 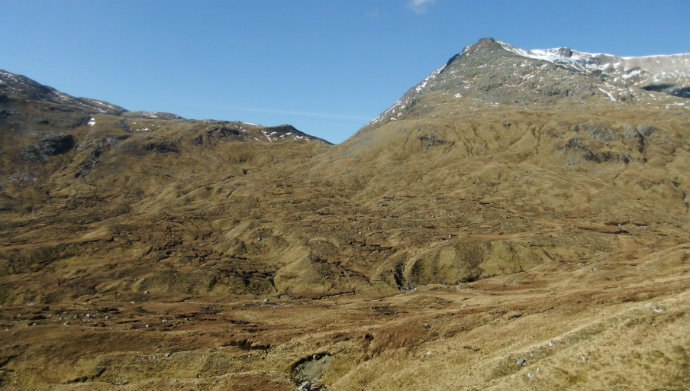 Bealach is the V shape, in the centre of the photo, at the bottom left of Conival

Decision time beckoned as I approached the head of the Glen: when should I drop down and start my ascent towards the bealach?
By 1355, I had followed the path to a point close to a prominent waterfall - perhaps the one about grid reference 310182? - when I decided to drop down and head up the other side of the Glen to the Bealach. 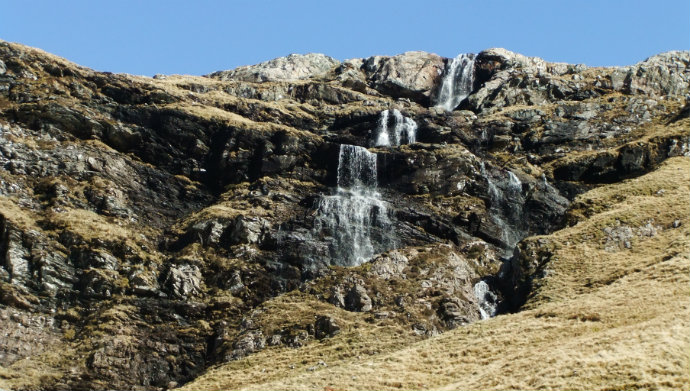 Continuing along the path didn't seem to make life any easier, in my view you would still eventually need to descend to re-ascend to the Bealach. As far as I could see, the path, such as it was, would continue beyond the waterfalls towards the south facing corrie below Conival and Ben More Assynt. 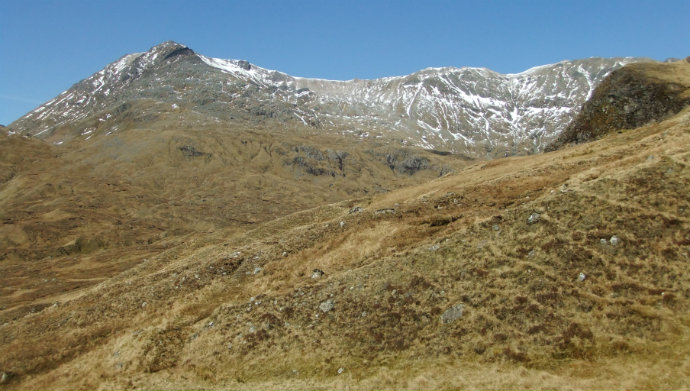 Nice easy descent, crossing over a stream or two, before beginning the ascent to the Bealach. Nice view back across to the waterfalls as I ascended towards the Bealach. 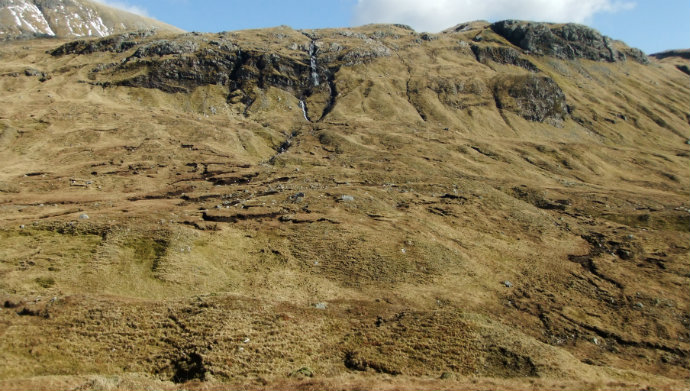 View back to the waterfalls as I ascend towards the Bealach

Hard work to reach the Bealach but the effort was worth it as I was rewarded with some incredible views; North East to the great corrie situated beneath Conival and Ben More Assynt and south back down Glen Oykel. 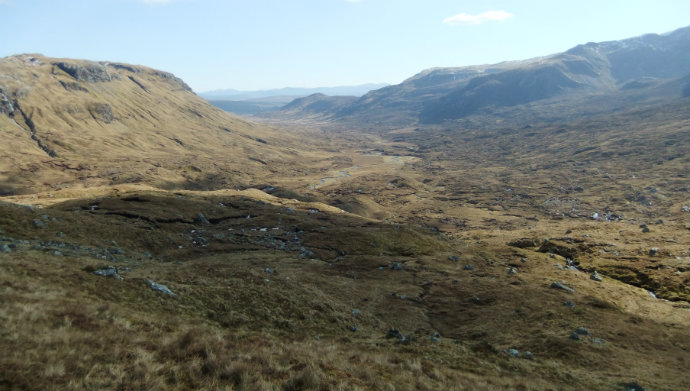 View back down Glen Oykel from the Bealach

I reached the Bealach at 1440 and what a a wonderfully atmospheric place it was. Still some patches of snow lying about and all the time the giant that is Conival looming above you. Wonderful. 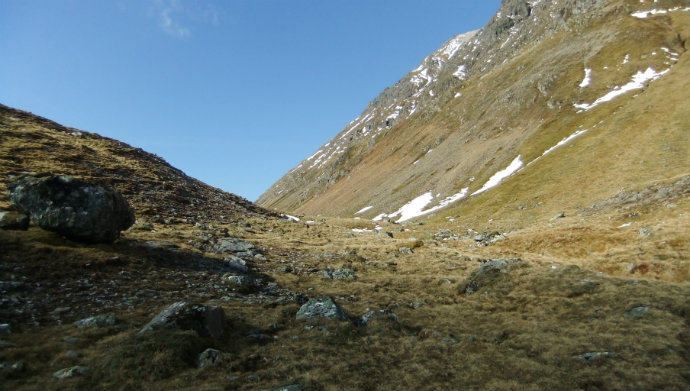 I picked up an obvious path that ran through the Bealach. 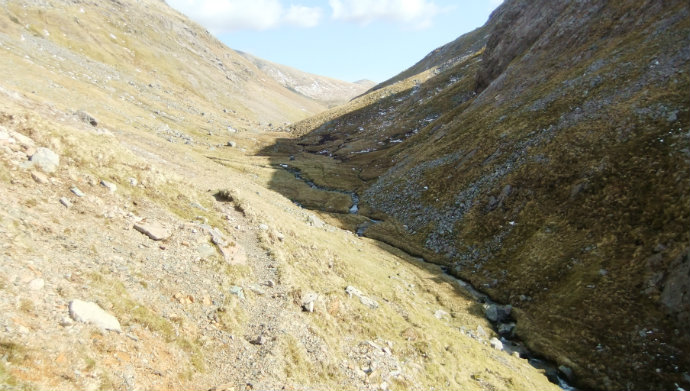 Looking back to my route through the Bealach

Towards the West end of the Bealach this path ran on the right hand side and above the Allt a Bhealaich, and eventually swung away from the Allt a Bhealaich and contoured round the western slopes of Conival. That afforded great views down to Loch Assynt. 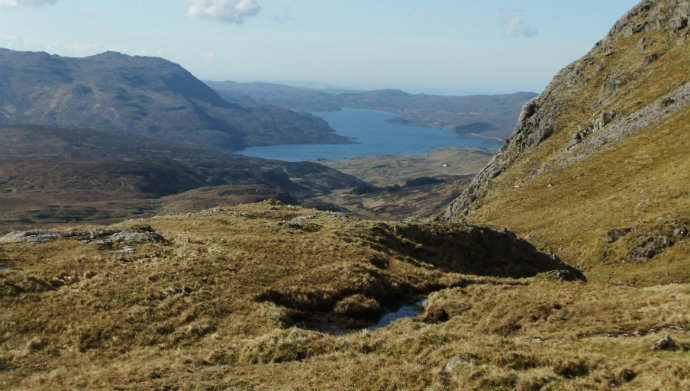 First view of Loch Assynt from the Bealach

Another path which appeared faint and rough seemed to follow the Allt a Bhealaich downstream but I think you're better off on the route described above. As you follow the path round towards the western flank of Conival you get great views, not only of Loch Assynt, but also of the River Traligill with the Munro Baggers' path above it. 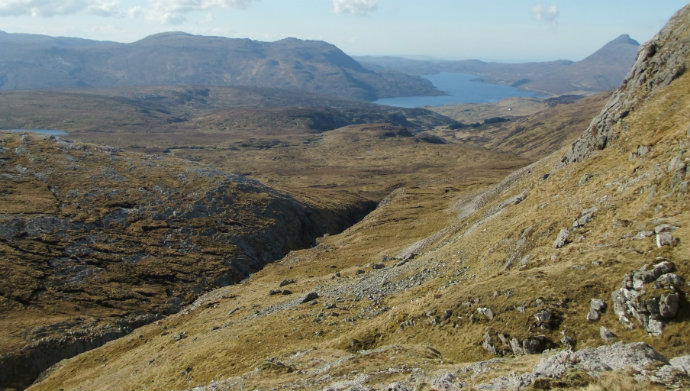 Another great view of Assynt

I headed down towards the River Traligill which I crossed at 1525. 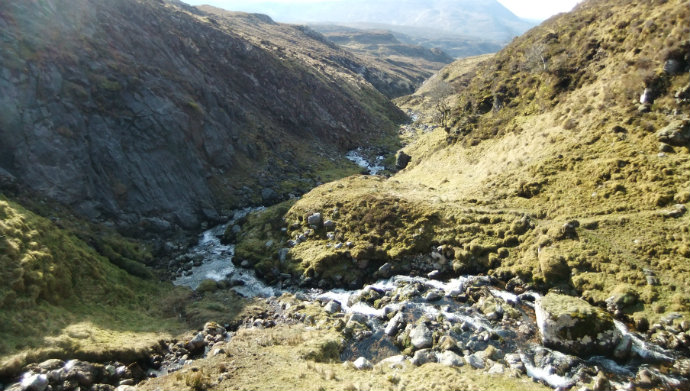 Once cross the Traligill, I picked up the Munro Baggers' path and followed that downstream, stopping occassionally to loook back up to Conival and the Bealach. 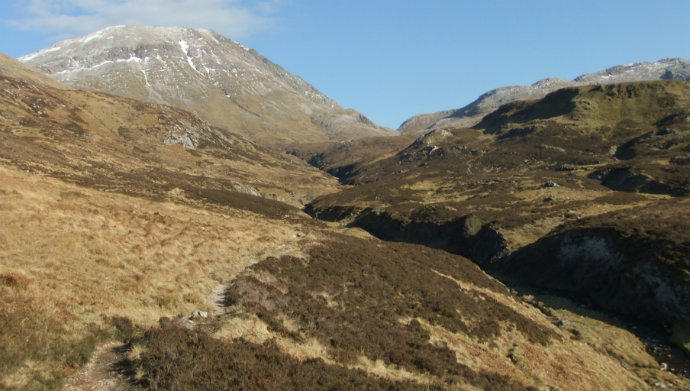 It's a nice easy descent and I reached Inchnadamph at 1620. 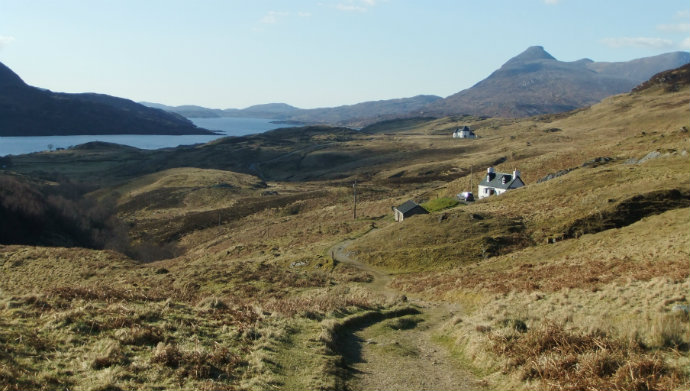 Approaching Inchnadamph and first view of houses since Benmore Lodge

Within 10 minutes of arriving at the road, I'd managed to get a lift back to Ullapool from where I'd get the bus back to Edinburgh the next day. Perfect end to a wonderful day.
What a great day; one of the best, and most challenging I've enjoyed since starting the Scottish National Trail at Kirk Yetholm in March last year.
The weather helped today, the blue skies in the afternoon made navigation straightforward and the streams I had to cross were relatively low in water. This would be a far more difficult day if the weather was inclement.