It was day two on my trip north and I had stayed in the lovely old shooting lodge in Braemar over night. During the day I arranged to meet my friend Colin who I actually havent seen or walked with since the previous summer. Looking forward to a catch up he ended up driving to the lodge for breakfast (they do a great brekfast for £4) and shortly after 9am we left to complete 2 Munros we had left out during our previous walks last summer. 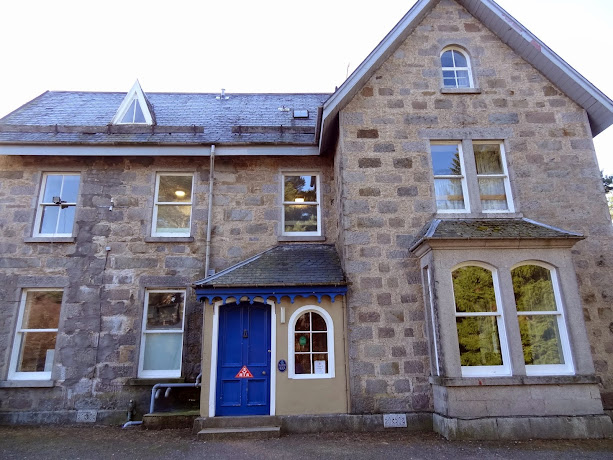 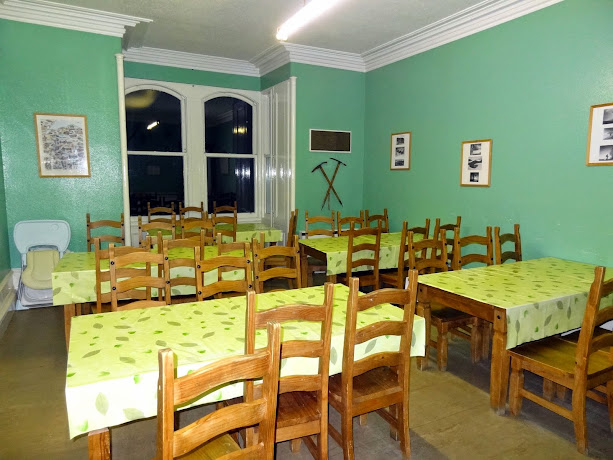 The dining room inside

As we had 2 cars, we planned to use two of them as we would be able to save time on the return walk along the road. We set off during glorious sunshine and fresh fallen snow covered the piste up Glas Maol. We had been debating which path to take and decided to stick to the edge of the nearly empty ski run for an easier walk up. Walking up the freshly 'combed' snow was so easy and we watched the occasional skier fly past us. By the time we wanted to leave the piste an angry skier stopped and angrily told us we were not allowed on the slope ???

and that we would be leaving the piste anyway in a few minutes. I kept out of the conversation but had to bite my tongue, as I was close to tell the guy that if he was not able to avoid 2 people who were walking to the far edge of the slope, he could not be a good skier!

I am not sure what the rules are, but neither of us saw a problem as we hardly walked in the middle of the slope! 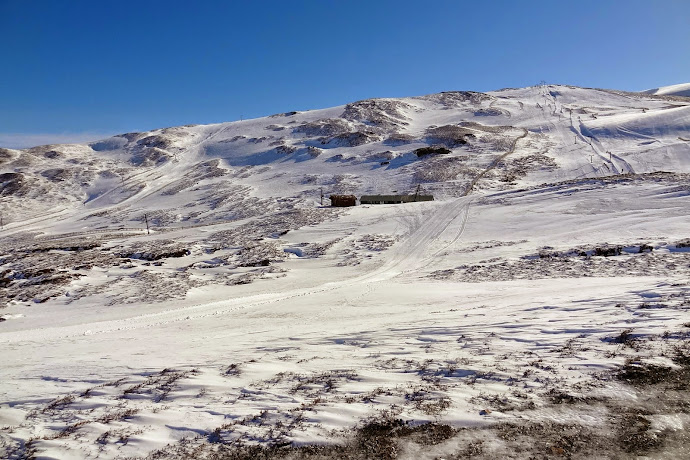 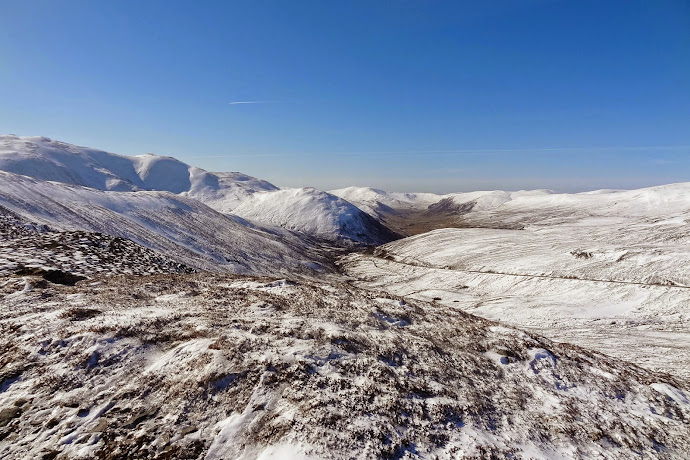 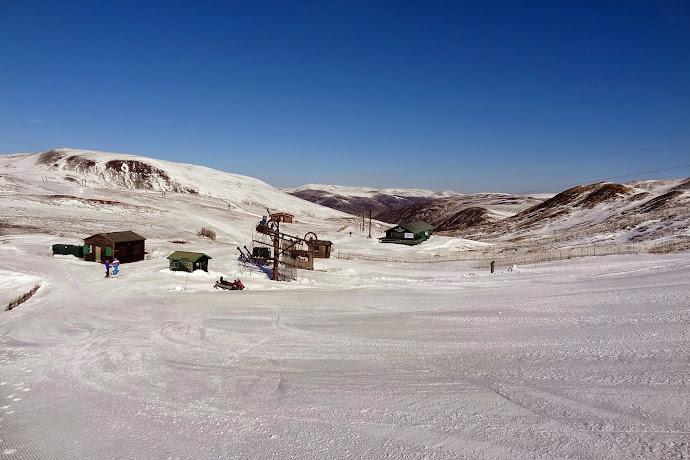 The ski center on a Monday...empty 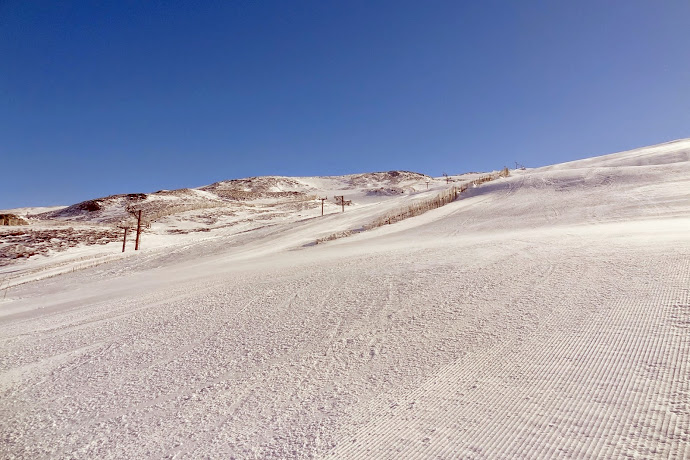 If you are into skiing you will like this view 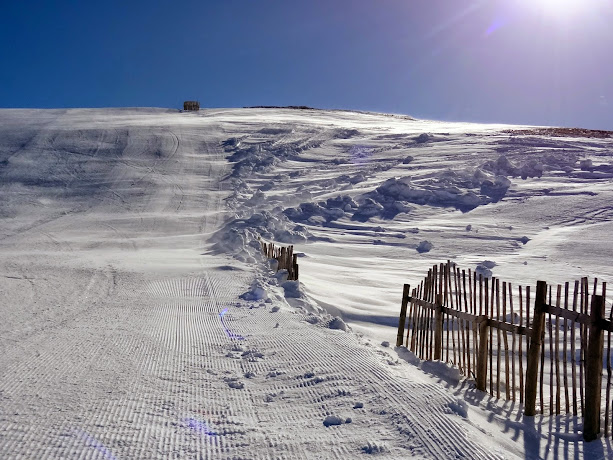 The edge we kept to 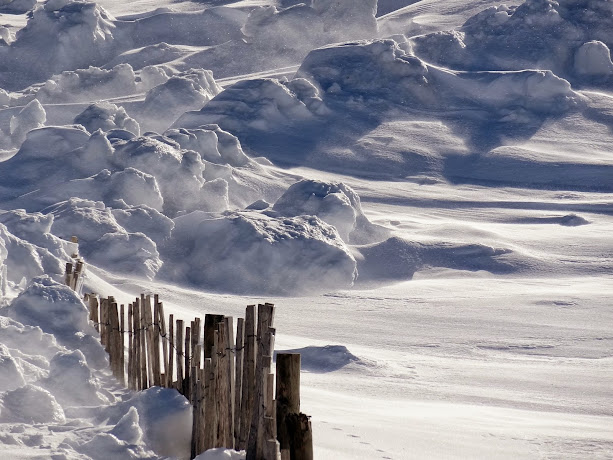 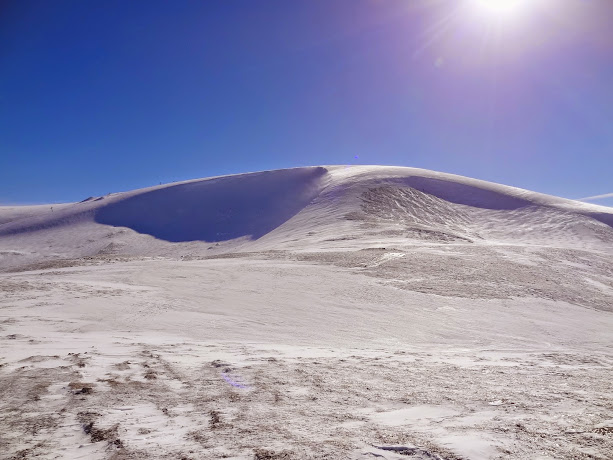 It looked easy from the bottom 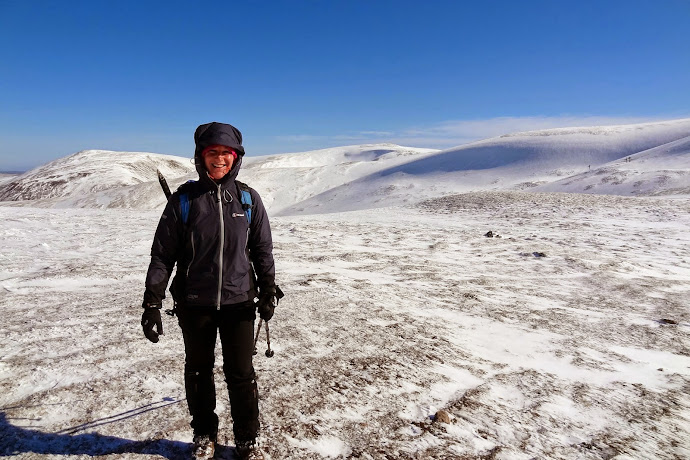 As planned we left the slope to walk up straight to the summit of Glas Maol What had looked like a gentle slope from the distance, turned out to be a rather steep hill. The first half was an easy walk through deep snow, but close to the top it started to get really steep and the snow was replaced by ice.

We had a problem!

I had taken my crampons and ice axe, but Colin had sold his gear last year (a sell he regrets deeply now) So how on earth would he be able to walk up a steep hill on ice? He tried but kept on slipping on the icy surface. Looking back we were followed by 2 old men, who carried the most ancient gear any of us has seen...think ice axe with a wooden handle and you get the picture! Saying our hellos we watched them while they climbed up the hill on hands and knees...

Looking around I searched for solutions. Towards the hill rose from the the valley and formed an amazing looking Cornice, close to it the wind had dumped some soft looking snow. and saw a bit close to the drop off and cornice which seemed softer snow. I walked over to investigate and indeed it was a thin layer of snow on top of ice- a possibility. I walked back to Colin and told him my plan. The issue was just how he could reach the other side. Taking my ice axe I started cutting steps- a lengthy process not without any risks, but it got him across the sheet of ice. Once we reached the 'softer' bit it was still dodgy and icy, but the top which was only 100m or so away. He took a few steps and nearly ended flat on his face.

It was still not perfect without crampons and discussing the options, the only way to get him up there was by linking arms and make him walk in front of me, while leaning slightly against his body using my weight to give him stability and stop any slips. It was madness and he looked at my doubtfully when I said ...welcome to your intense winter skills training!
I passed him my ice axe and one walking pole for further stability and clinging on to each other (both slightly embarrassed for having to get so close) we made a very slow walk up the hill. It must have looked completely bizarre from the bottom and only the occasional nervous laughter and uttering this is mental escaped our lips!

I think it took us nearly half an hour, but at the end we made it. Colin admitted only then that he had been never so scared in his life and kept on thinking that if any of us would fall we would be both on a downhill tumble.

Looking around the flat surface of the Cairngorm mountain lay ahead of us and the sun and blue sky made up forget the dangers we just had encountered. 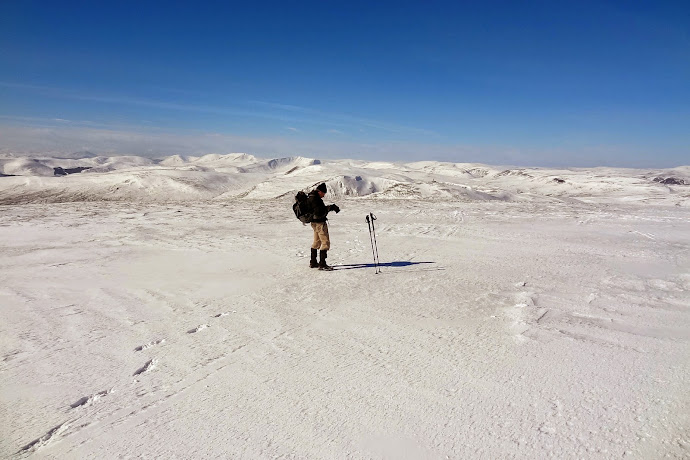 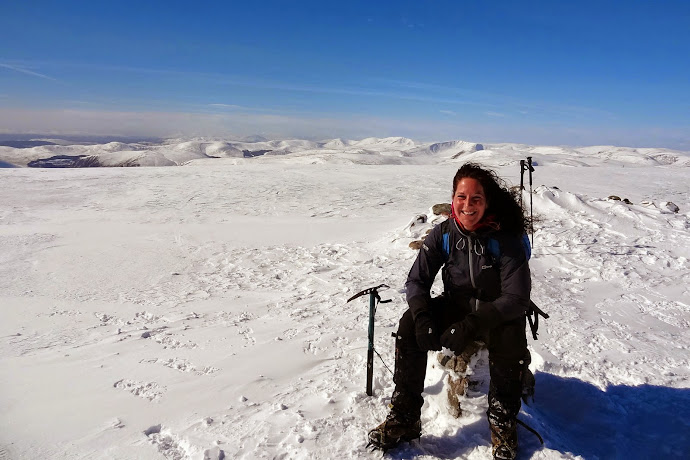 Not very often you can sit on a cairn like that 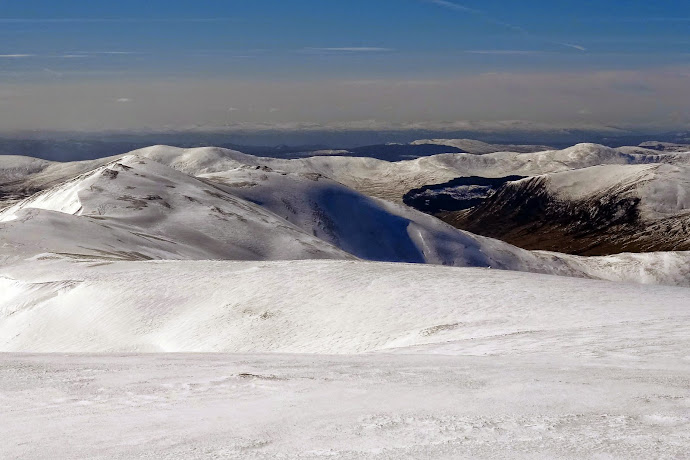 
The wind was fierce but the ground easy to walk on and walking along we met a single walker who asked us how we would get back down. We told him that we had the two cars and Colin offered to give him a lift, if he fancied waiting for us at the end. Moving along we reached the first Munro and made the easy walk towards Creag Leacach. Just before we reached the second Munro we met another guy who had carried his skis up and discussing the way he came up, he told us that we would not have any problems getting down. The relieve was huge, as neither of us fancied a repeat what we had done to get up the mountain.

Walking along Colin suddenly said if I wanted the bad news. Confused I turned around and looked at him quizzingly. " I left my car keys in your car".
I looked at him and started laughing - classic- as I remembered seeing him leaving the keys and not thinking anything off it ! We did however feel really bad for the other walker who we had promised a lift- but we would worry about it when we got to the car.

Just before we reached the top the wind picked up and transformed the hill side into a spectacle of spindrifts and fierce snow drifts..it was like walking in the Arctic and invited to take some spectacular pictures. We reached the top soon after, but the freezing winds drove us down. Just as the walker with skies had said the walk down was pleasant and easy. 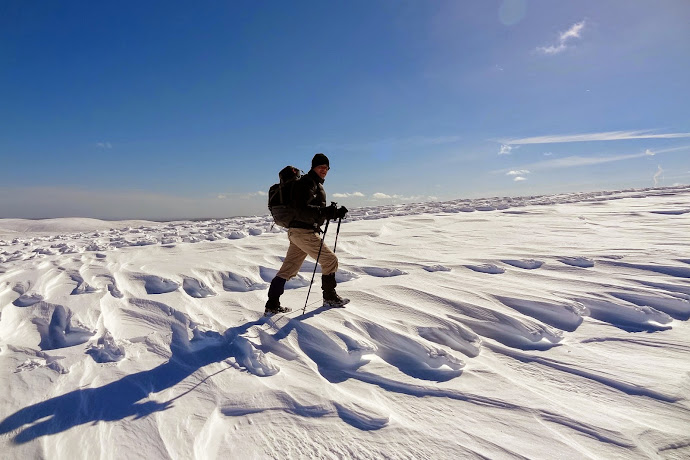 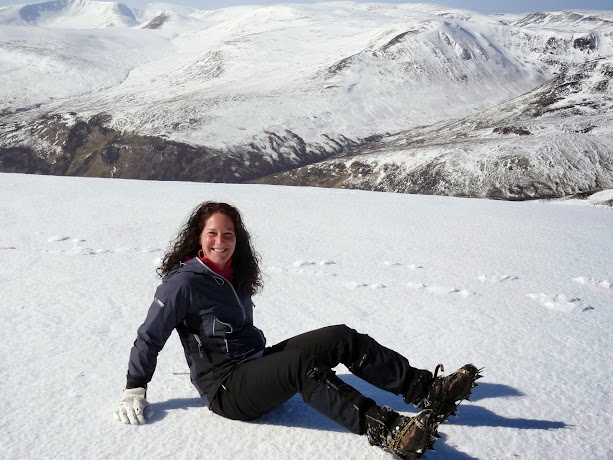 The only wind still area...I was ready to sunbath 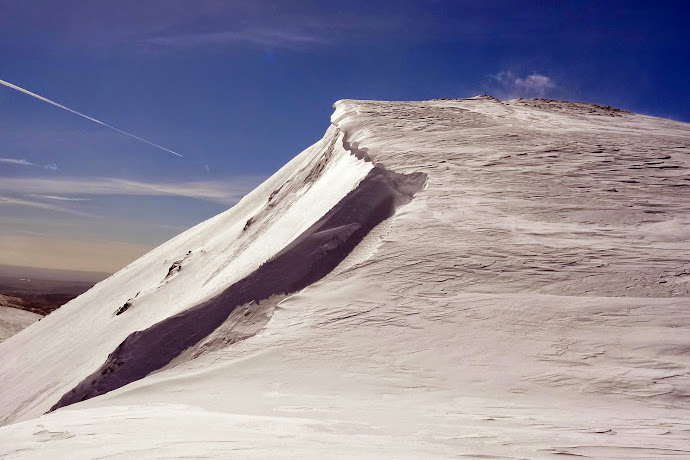 The second Munro Creag Leacach before the storm hit 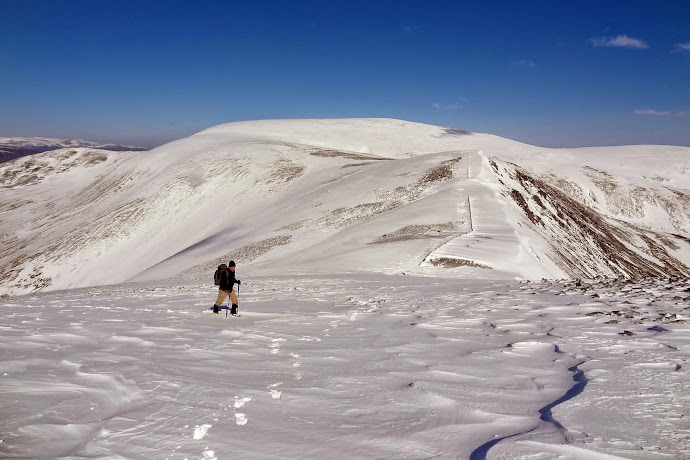 Colin on his way 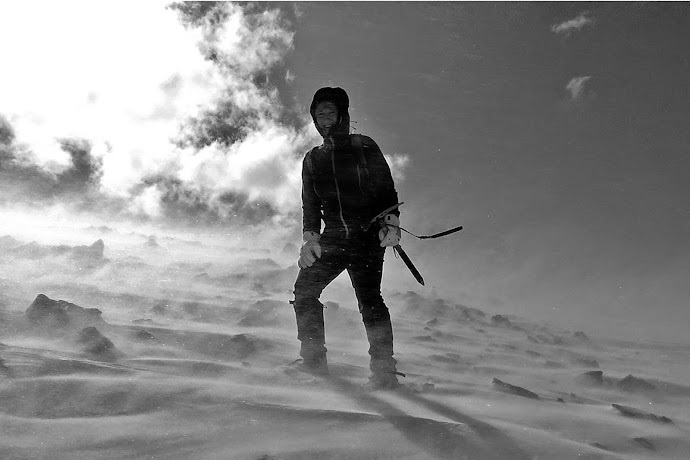 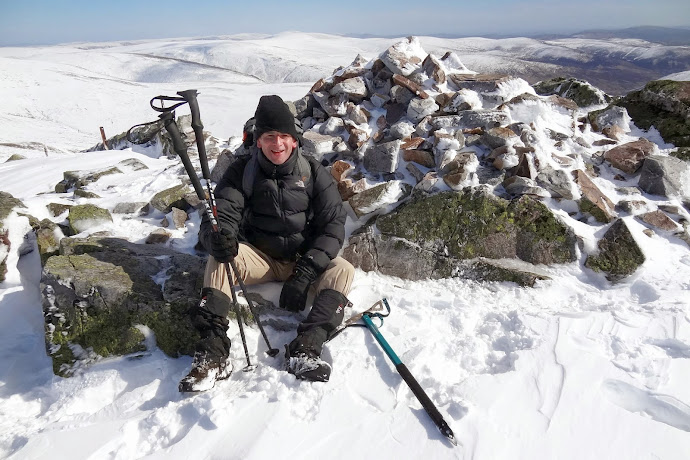 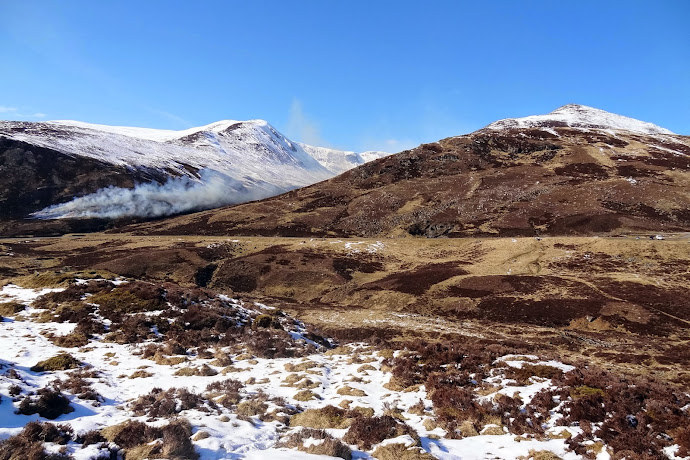 On the way down with a wildfire in the distance 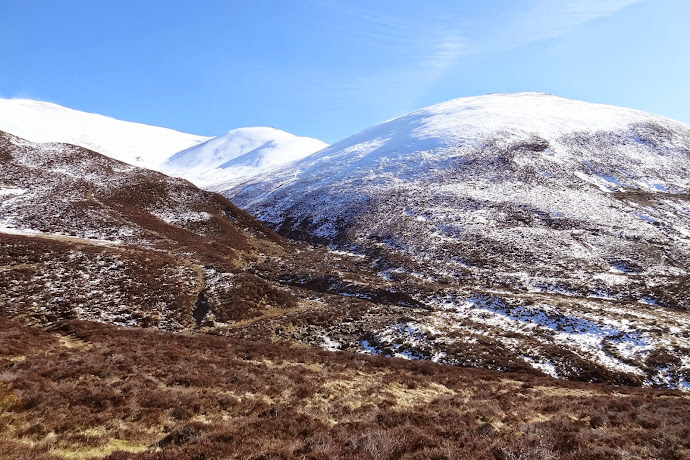 When we got to the car, the other walker had waited for us for a good half an hour and after telling him the bad news about our key disaster, I told the boys that I would try to get a lift back to my car. Leaving my ice axe behind, to hopefully make my chances of catching a lift more feasible, I stood on the road and was lucky when a few minutes after a car stopped and a lovely woman gave me a lift back to car park were I had left my car.

Colin gave the other hill walker a lift back and on our separate way back home we agreed that this was an adventure neither of us would forget easily.

Done that before on the same hills left my keys in pigeons car so Colin is not alone DOH!! The hills in snow and clear weather its a lovely place to be except for the wind .

Great pics and some day you had. I think I know what I would have said to the skier, sumink to do with poles and where the sun don't shine lol

Another cracking day out for you in glorious weather! Enjoyed reading that!

Mountainlove, can you not just do a hill without a death defying crossing of a snowy ledge or a slippy assent

beats my up and down walk yesterday in the clouds. Following a compass bearing in the snow makes your eyes go like this

When I saw that title and your name next to it, well I knew it was one I just had to read!!!!!

As for Mr Angry Skier, I'd have asked him if the same thing applied to an off-piste back-country skier flying past hillwalkers - then I'd have used Dave's line!

Your always getting into ploys

Aaaahhhh...the old forgot my ice axe and crampons so we'll have to link arms routine

As for the skiers: they don't like walkers post-holing their nice piste, but as you were keeping to the edge I don't see the problem.

Was a crowd of walkers up glencoe at the weekend. A few skiers and boarders waved to them but that was the extent of interaction.
Must be a friendlier bunch there than glenshee

Some great photos there especially the into the wild one!

pity about the keys, mr angry skier, and only one pair of crampons, otherwise a superb winter days walking

Did the two thing once and had to stop my companion leaving his keys in my door pocket!

Great report and photos there Mia.You always seem to have an adventure wherever you go! Had my head in my hands when the car keys were mentioned....hope you are well x

I thought perhaps you were going to use one crampon each - wish I'd been there to see it must have been funny to watch!

mrssanta wrote:I thought perhaps you were going to use one crampon each - wish I'd been there to see it must have been funny to watch!

Immediately brought to mind a bizarre form of a three-legged race.

That would have been something to see.