Had done a few wee cycles and walks, but this was to be the first major of 2014, after a longer than desired layoff, after back injury. Knowing there was plenty snow about, I didn't want to take on anything too arduous, or risky, but still wanted the possible chance to give the crampo's a try out, having never gone there (crampons) before. Beinn Ime, being quite close to hand seemed like a decent choice and if too snowy, or too unfit, could maybe manage Beinn Chorranaich?
Got to the layby just above the ruin at Butterbridge, just as a pleasant, more mature couple were about to set off, also heading for Beinn Ime. "Well, if they can do it .......... I'll give them a wee start and I'll soon catch them up." Or, so I thought.
Anyway, I did eventually catch up with them, near Glas Bealach, as they stopped to put on some heavy duty ironwear. Looking at the steep and foreboding shaded rise to the summit, I felt it wise to follow their lead and also looked out the crampons, which would be my first trial with them. Actually, tying them, was the first trial! Again, I gave them a head start, to follow their route and soon made my way up, trying to assess the difference made by the crampons, with ice axe also at the ready. Without being too sure, I think they were almost essential and am sure it would have been a tricky, lengthy and arduous climb without them, although a solo chap arrived at the summit, having come up the south side without them. Just about two hours to the top. Young ones beat me to top. 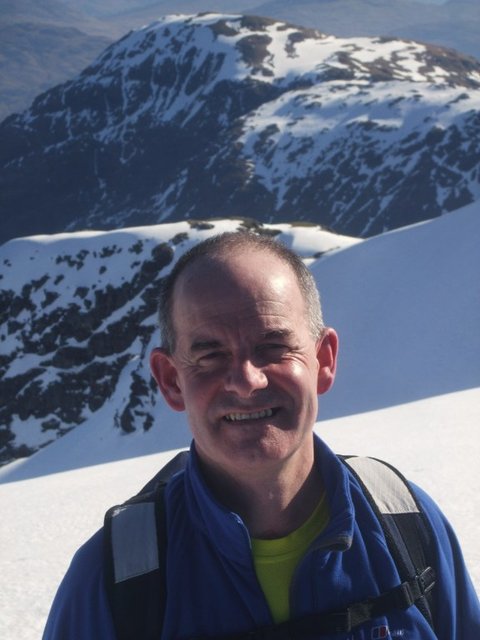 The views were majestic, in all directions and made up my mind to try for another hill, while I was there, so off I went to make Beinn Luibhean, too. I headed down south side a few hundred yards, then SE'ly down a steeper and deeper, snow covered slope, to the Bealach a'Mhargaidh. 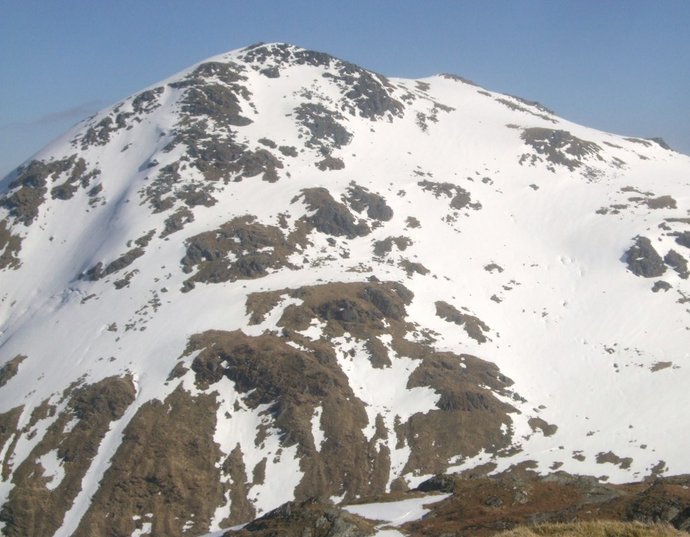 From here it was pretty much west, picking a route up and around and through, some deep snow to the top. From there I headed directly north, down the steep ridge, sometimes using the axe to help with grip, before coming onto the rough, grassy drop to Allt Beinn Ime, paying a quick visit to the ruin at Butterbridge, before heading back to the car. A well spent four and a quarter hours and it should be noted I made it back before the old couple - though they were planning to do Beinn Narnian and maybe others! 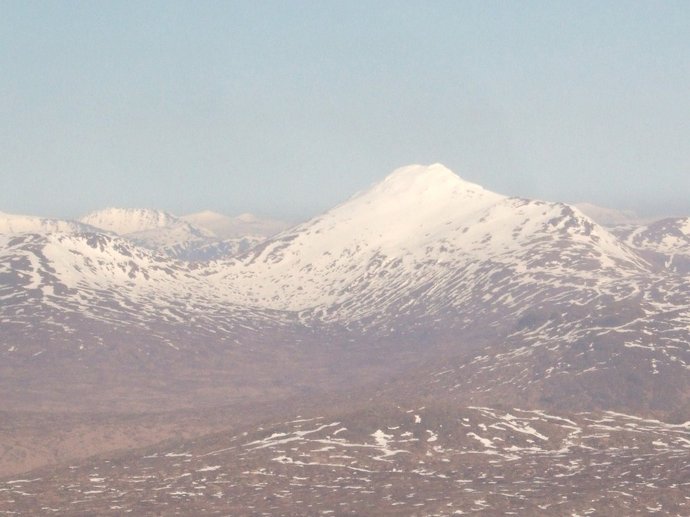 Cobbler with the Clyde beyond. Cracking pictures jimbo and good report, no danger getting lost there.

Big Jesper wrote:Cracking pictures jimbo and good report, no danger getting lost there.

Aye, not even me, the great Fiasco De Gama, could get lost that day, that hill.

Great views to the Cobbler from this summit too. I often find you only get to know a hill once youv'e looked at it from one of it's neighbours and from a different angle

Bubba Ribeye wrote:It's a great wee hill if your looking for somewhere off the beaten track as an alternative to the other more popular Arrochars

Great views to the Cobbler from this summit too. I often find you only get to know a hill once youv'e looked at it from one of it's neighbours and from a different angle

Aye, you're right, Bubba. Am hoping to get a wee trip in to do A'Chrois sometime. Have you done it? Not sure if best to do via top of Beinn Narnian, or if there is an easier way?
Still haven't managed to bump into you for one of yer namesakes yet

JimboJim wrote:Am hoping to get a wee trip in to do A'Chrois sometime. Have you done it? Not sure if best to do via top of Beinn Narnian, or if there is an easier way?

A' Chrois is well defended by forestry on most sides, so it probably is best to combine it with Narnain: it's a nice wander along the ridge between the two. You can then descend via the Allt Sugach: there is a faint path on its E bank down through the trees, or else you can contour back round above the forestry to meet the main Cobbler path again.

Hey! Yes .....I approached A'Crois as part of a day out from Narnain summit on a bright sunny day probably the easiest and most scenic route. I came down from the East following a deer track through rough, tufty grass but next time I'll try the steep path down to join the Glen Loin Loop forest path and back that way to Arrochar