West Mamores and a geology lesson

West Mamores and a geology lesson

Stob Ban and Mullach nan Coirean.gpx Open full screen  NB: Walkhighlands is not responsible for the accuracy of gpx files in users posts
Day two of the Mamores trip with Stob Ban and Mullach nan Coirean on the menu. From the car park at Achriabhach, it is just a short walk along the road to the bridge, where the path strikes off in a SSE direction. The path is well defined and climbs up steadily high above the river, which runs through an impressive ravine. The weather was lovely, for the 6th day in a row! I couldn’t believe my luck. 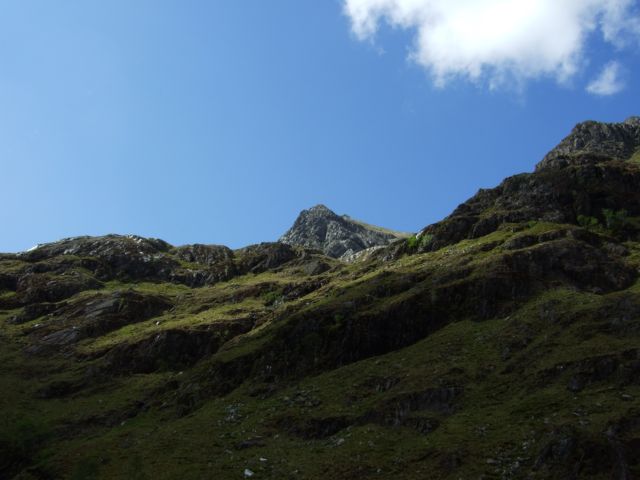 After some scattered woodland the path meets the river again and there are some nice waterfalls to admire. It was hereabouts that I went astray. A landslide was successfully skirted and a man high rock wall skillfully ascended. And then, after these aptitude tests, the path disappeared! Stob Ban in all its glory

But not too worry, it was pretty obvious where to go as Stob Ban was in full view. Progress just got considerably slower now. Ahead were two walkers, who had taken the same wrong turning. Also ahead I could see the outline of what turned out to be the path. Once on it I quickly caught up with the two walkers, who were from Glasgow. They took a break at the bealach, whereas I continued, knowing they would soon catch up on me anyway. 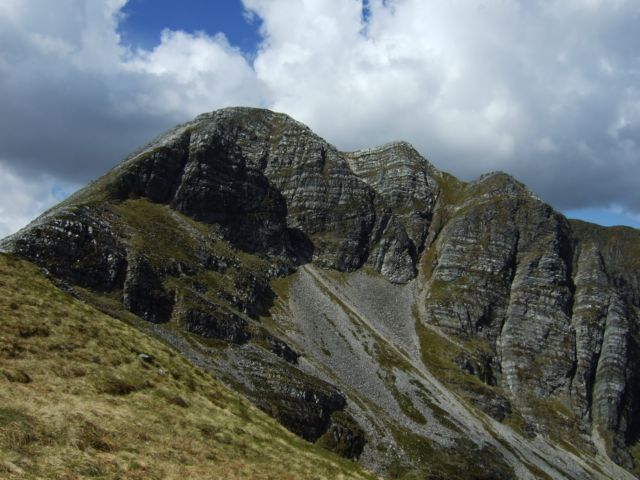 Stob Ban from the bealach

Stob Ban is a imposing hill, showing off the magnificent rock strata of its northeast face on the way up. The ascent along the ridge was easy on the well defined path, helped by the fantastic views into the upper corrie. The path I missed, zigzagging away from the Allt Coire a' Mhusgain

On the summit the feast continued with views far and wide. From here the ridge looked very impressive, especially now fellow walkers were appearing on it. View towards Beinn a' Bheithir Sgurr and Iubhair, Stob Ban and Blackwater Reservoir beyond Ben Nevis on one of its 30 cloud free days 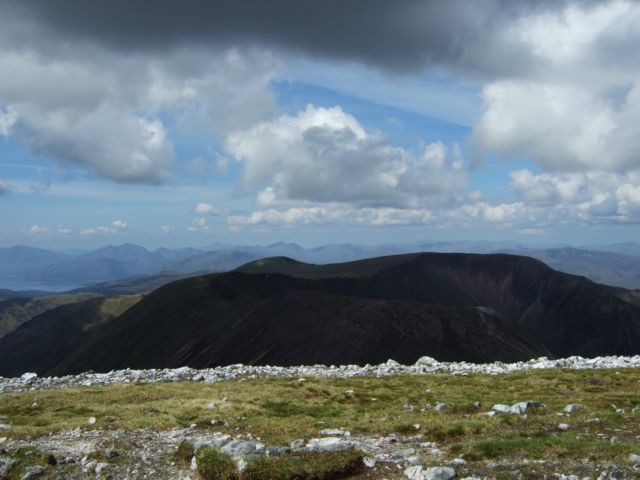 I was soon joined by the two from Glasgow; and a father and son duo. With lunch breaks, taking pictures etc we all left the summit at different times, but caught up on each other on the way to Mullach nan Coirean, chatting as we went along.
The descent from Stob Ban couldn’t be more different than the ascent. Where did all that scree come from?! Once on pt. 912 it was back to grassy slopes. And curiously at point 846 the grey quartzite of Stob Ban abruptly changes to the red granite of Mullach nan Coirean. From quartzite to granite on point 864!

I researched this a bit when back home and this is what I understood, as a non-specialist (so please bear with me).
Dalradian rocks are the foundation of most of the Highlands southeast of the Great Glen. They started off as various deposits (sand, mud, lime) on vast coastal plains. Due to being buried and compressed, they turned into stone, with the sandy deposits becoming sandstone. During the Caledonian earth movements 470-430 million years ago, three continents started moving towards each other. The Scotland-to-be was in the crumple zone so to speak. By 430 million years ago the continents collided and in the process folded the earth’s crust, making it thicker. Continental crust is buoyant, as it is less dense than the earth’s inside, hence it will rise. Thick crust rises higher than normal crust, leading to the formation of mountains.
With the greater pressure and high temperatures which accompanied the folding , sandstone recrystalised into white quartzite. Amongst others in the Mamores and the Grey Corries the quartzite has come to the surface as a result of the folding process. So that explained the quartzite. But where did the granite lump of Mullach nan Coirean come from?
In extreme cases during the folding process, rocks melted and became magma, which accumulated in magma chambers deep below the earth’s surface. After a volcanic eruption the material in the magma chamber cooled and crystalised, resulting in igneous rock such as granite. As magma continued to accumulate, large granite bodies were formed. Mullach nan Coirean is one of them.
And here endeth thy education.

If you want to know more, on the website of Scottish Natural Heritage are some easy read booklets to be found. This info is taken from Ben Nevis and Glen Coe: a landscape fashioned by geology (SNH, 2007), downloadable as a pdf from their website http://www.snh.gov.uk/publications-data-and-research/publications/search-the-catalogue/publication-detail/?id=849 . It’s very informative!

The continuation to Mullach nan Coirean is an absolute doddle. Gentle inclines, a good path and a matter of just following the ridge.
Not before long we arrived at the summit, which has a massive cairn. My fellow walkers snapped a quick piccie and off they were. Whereas I stayed a bit longer to savour the extensive views. The descent goes north at first, then curving right onto the northeast ridge. I can imagine this is easily missed in poor visibility. However there is a clear path all the way down. At the young woodland I caught up again with my fellow walkers. This little patch of green is gorgeous. Unfortunately it soon leads to a felled forest. Mind you, on a good path with complimentary seating provided! Then it was just a short stroll to the hairpin bend, shortly after which a lovely woodland path on the right leads you back to the car park. Can’t think of a better way to have spent the day.

Re: West Mamores and a geology lesson

Re: West Mamores and a geology lesson

Thank you Rockhopper! The final installment of my Mamores reports is coming soon. That one will resemble your report a bit more.