Am Faochagach – One for the serious “Bagger”

Am Faochagach – One for the serious “Bagger”


It’s been a while since I last posted a walk report!

In fact, I’ve not posted a report so far this year. What better excuse then than the walkhighlands “Ullapool”ish spring meet

to get back on the bike (oh, hang on a minute I’m a purist, I don’t use peddle power

My hill of choice for the Friday drive up to “Ullapool” was Am Faochagach. This one had been on my to-do list for months. Not that descriptions suggested it was necessarily a “looker” in hill walking terms

and as I was to discover it certainly wouldn’t appear on any “top 10 sexiest hills” lists. But to stand atop its summit would present another blue balloon on my Munro map

And little did I know when I signed up to this meet, without seeking the permission of MrsR, that it would turn out to be my first Munro of 2014

It’s been all Corbetts and Sub-2ks recently

The plan was to do the hill from the Loch Glascarnoch dam, rather than risk the notorious river crossing and snorkel gear required for the standard route (which it turned out was a breeze by all accounts

I was joined for the walk by londonwalker (Andy) and kmai61 (Karen).

My preparation for the day was text book – Finished working on the Thursday at 11.30, 2.30 hours sleep before leaving the house at 3.15 a.m. for a 4 hour drive to the parking area at the dam

Andy had been in the hills for a few days already, so clearly he was going to be a well oiled machine. Karen introduced herself by telling us she hadn’t done any serious walking this winter

So we were looking like a well match group then 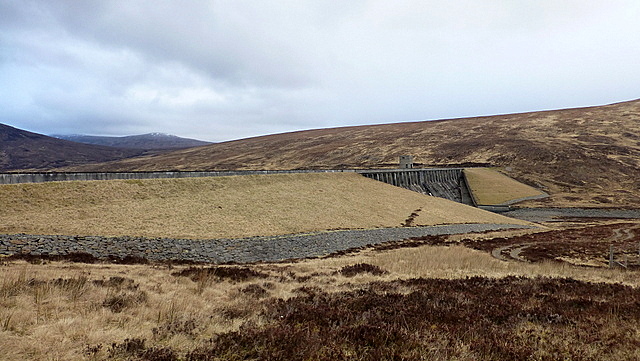 Heading off and things were looking fairly promising weather wise. Good amounts of blue sky and some promising views down Loch Glascarnoch toward the mighty An Teallach 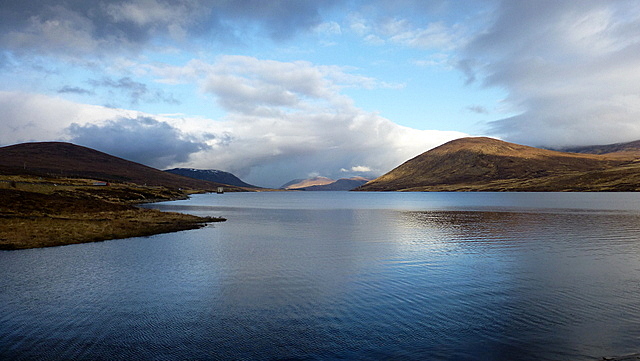 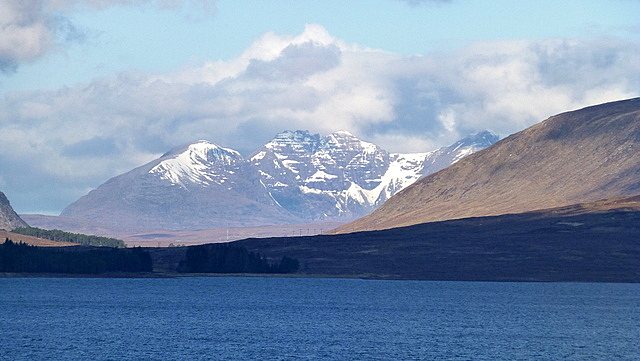 An early view of An Teallach

Other summits were holding on to their cloud, but we lived in hope that it would lift and break as the day went by. It turned out to be a vain hope sadly

It’s an enjoyable walk alongside the loch. Hindsight suggests we shouldn’t have continued to the radio mast, but then again hindsight’s boring 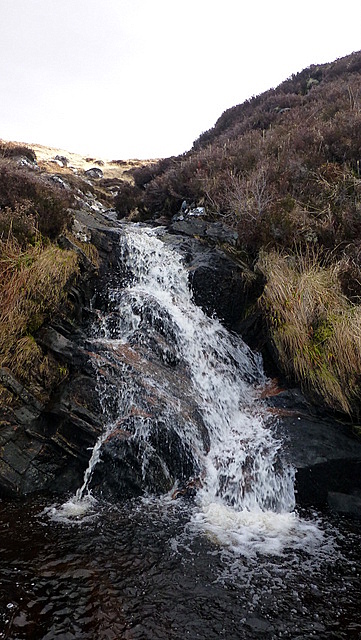 Waterfall beside the landrover track

Just past the mast we decided to head onto the open hillside. What in effect was a slog over grass, heather and bog

A nifty bit of deer fence climbing was required at one point, as the landowner had selfishly not put a gate in the fence anywhere near where we were walking 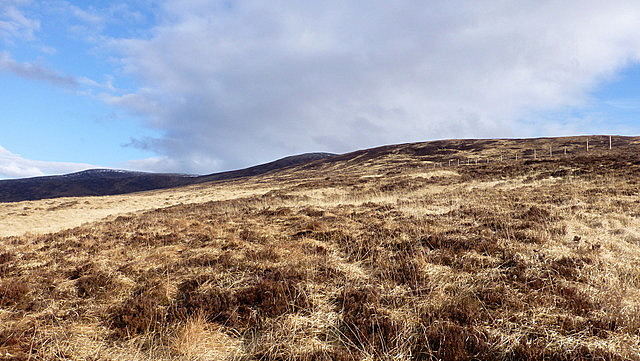 Once over the fence and onto the broad ridge it was then a question of picking up the ATV tracks and walking ourselves to the summit. Eventually we had to enter the clag, and as time went on the wind was certainly picking up

It was fair chilly when we met some fellow walkhighlanders appearing out of the gloom, making their way down and back to their cars at the start of the standard route.

Still got some nice views along the way though 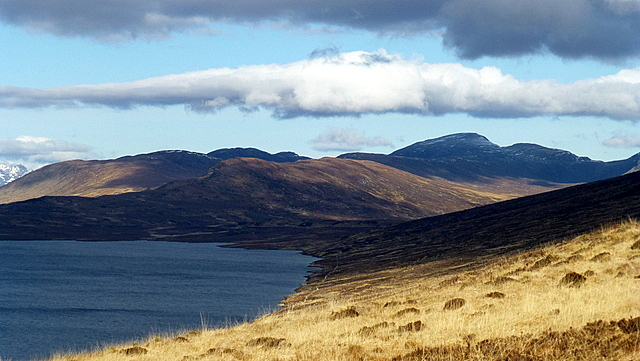 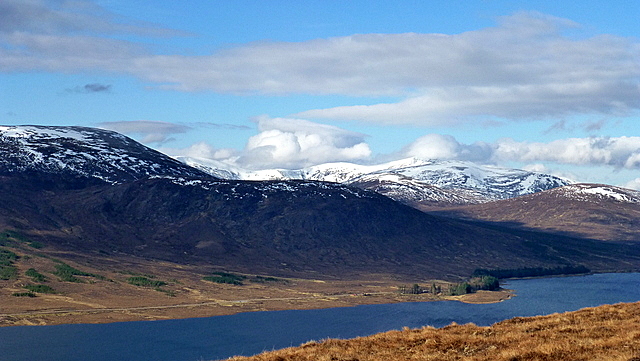 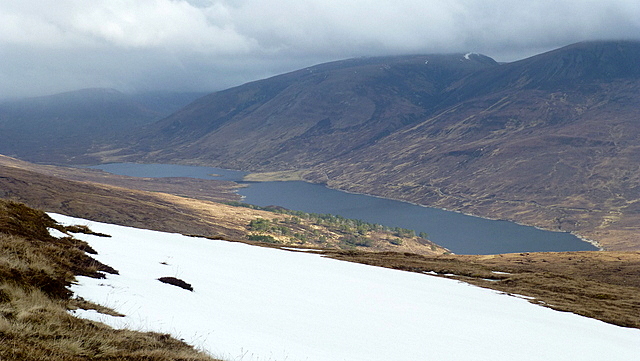 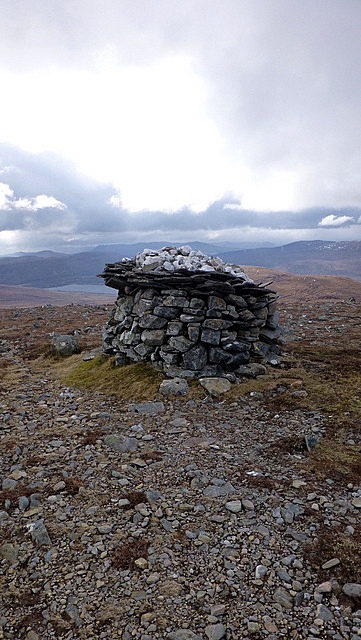 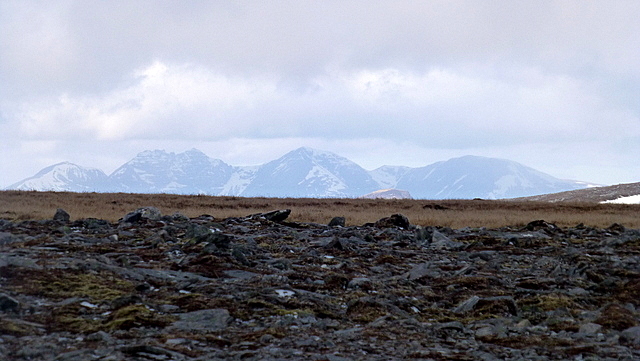 The final trot to the summit was fairly easy, in the gloom and increasingly chilly wind. Super views from the summit (I’m told 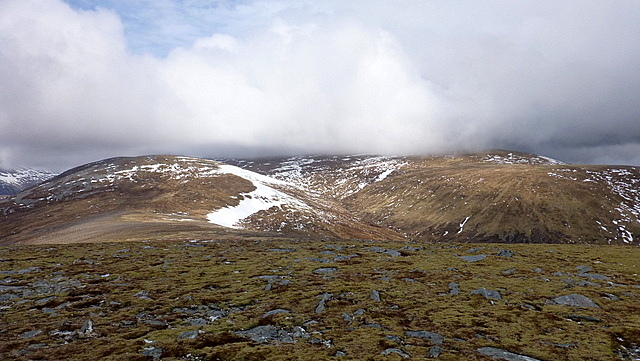 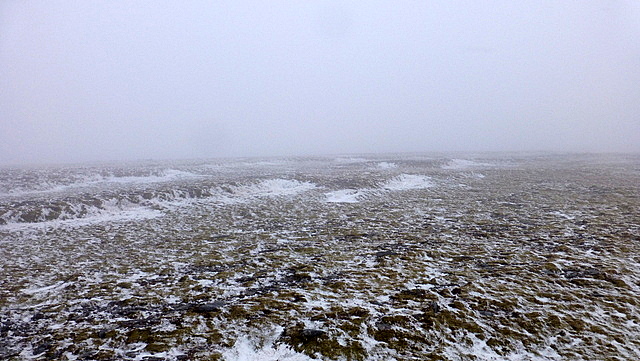 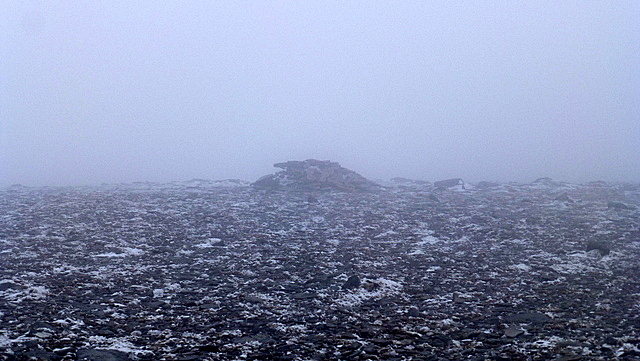 In descent we made a slight miscalculation in the clag and found ourselves dropping down off the ridge in the wrong place. 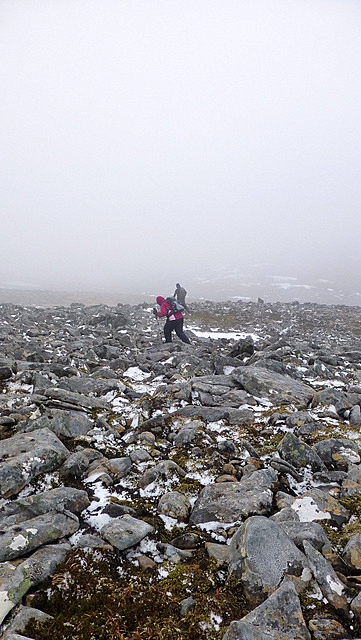 Heading down at slightly the wrong point

This meant a bit of re-ascent, which given my lack of sleep felt like more of an inconvenience than it was in reality. Once back on the ridge the path back down was straightforward. We eventually had to opportunity to stop and rest in the shelter of the sizeable cairn on Tom Ban Mor. This had been our first real opportunity to stop in any sheltered place the whole day, so we were feeling pretty weary by this point (well, I know I was

). This gave us a chance to reflect on the hill. I think the consensus was that it was good to have it “ticked”, but it certainly wasn’t one of those hills you’d want to find yourself returning too. Definitely one for the serious “bagger” 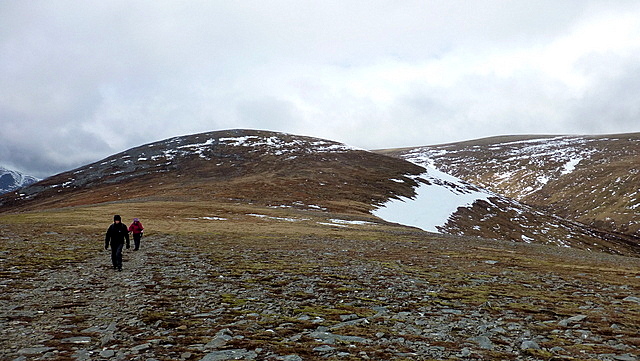 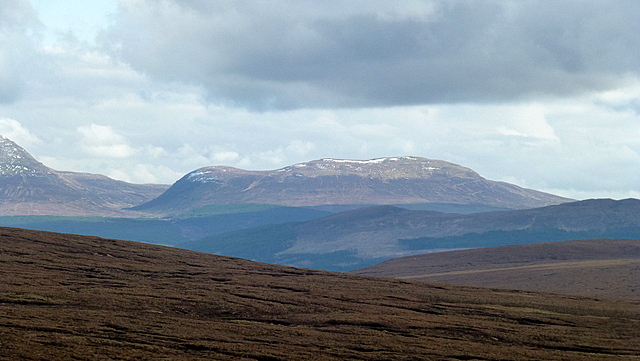 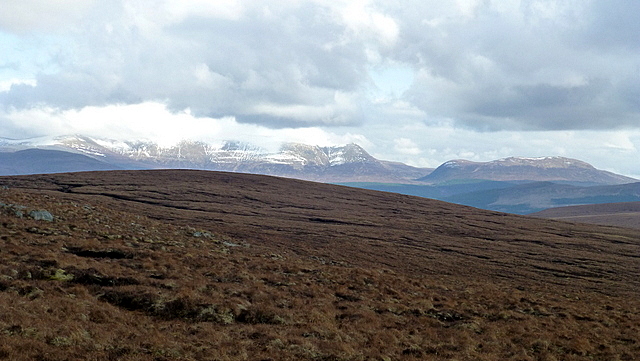 Then it was on with the final descent back to the landrover track. This time round we decided to drop down at the correct point (but not until we’d experienced the joy of a bit more bog-trotting on the way 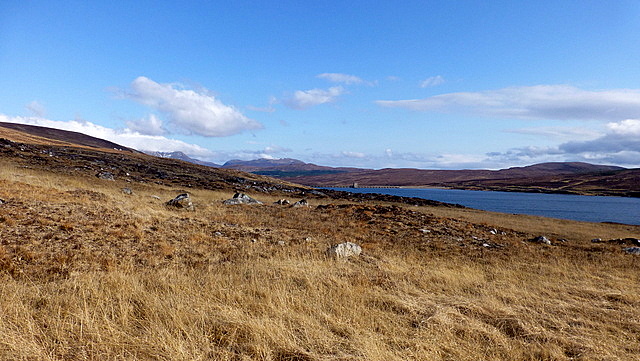 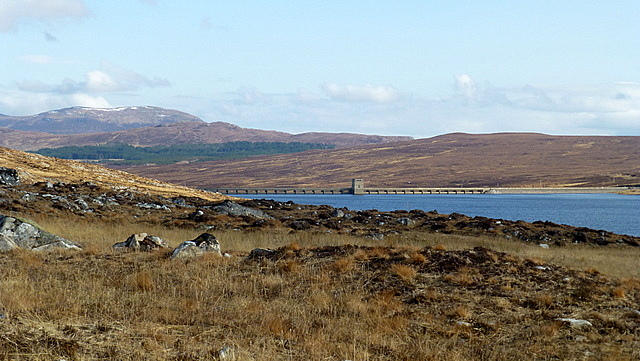 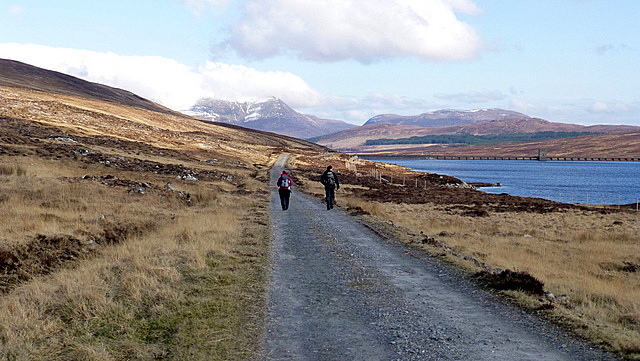 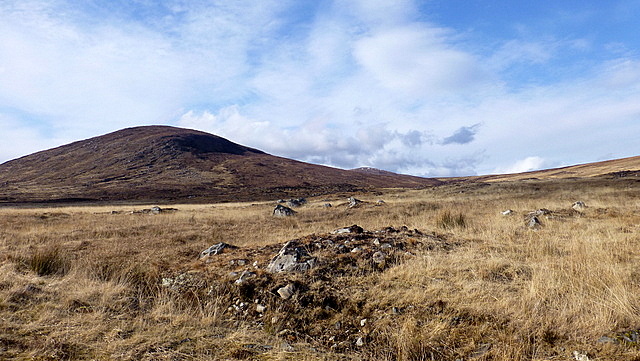 Looking back to the days walk

By now we were back in the good weather, and it was proving to be a bit warm. An Teallach looked even better than in the morrning, viewed down Loch Glascarnoch 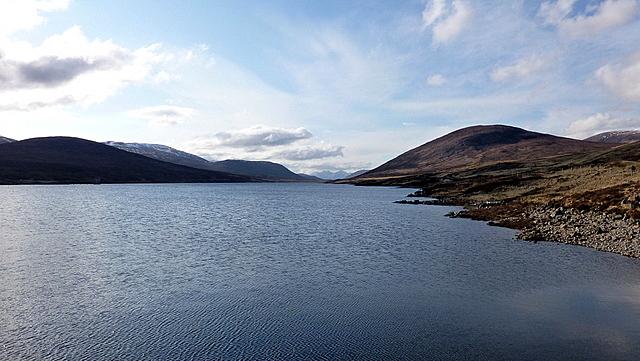 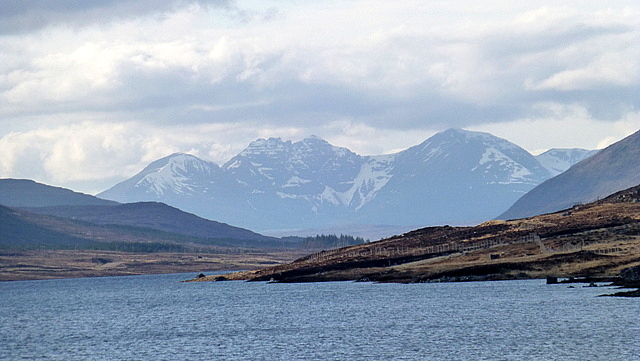 Eventually we were back at the car and preparing for the drive to the “Ullapool” meet. For me this consisted of a trip to Ullapool to stock up on a few bits and pieces and a well-earned fish supper

The prelude to this weekend had not been that promising for me. MrsR was clearly not happy at me disappearing off for the weekend, given I’ve working away from home for large chunks of time for the best part of the last 5 months

She was saying “Of course I don’t mind you heading of for the weekend. You work hard, you deserve it”. But what she was saying was “you @&%@

" My week had also had its fair share of stresses at work, and I was pretty frazzled by the time I got home Thursday evening.

So I was feeling a tad irritable as I headed off at 3.15 a.m. and had been tempted on more than one occasion to simply turn round and head home. By the end of the day though my mood was most definitely much improved

MrsR’s “messages” were still swimming round in my head and I'd decided to head home early to spend Mothers Day with her, but the hassles of the week had certainly been put to bed. Talking of which, despite my lack of sleep I still managed a few pints in the evening before finally hitting the sack at around 11.00 p.m.

Big thanks to Andy and Karen for coping with my slow plodding on the day, but more importantly giving me the motivation to get up and out on the Friday morning and being great company on the day

Had I been on my own I think this one would still be on my to-do list today.

Och I got the same 'views' when I did it

shame you left the meet early but family first

Some braw photos of the loch and the forge for your efforts..

I see what you mean about one for the serious "bagger". But truly inspiringly wonderful pix of An Teallach - one I still have to do (sadly 11 driving hours away). It looks like one of the few hills that can match the Cuillin Ridge for dramatic splendour. I may try this summer if there's a weather window.... (unquenchable optimism)....

Hi Peter.
Nice report and super pictures. Navigating off the summit in clag is something I have found problematic over the years. ask MM about the cock up on Slioch

Planning to revert to good old compass bearing in the future - let's see if I make a better job of it.

Love the shots up the loch of An Tellach, got some zoom that little camera.

Like you said it's a good one to get done and the route from the dam does make a full day of it. I hope we haven't put Karen off for good

. But she did look a bit drained in the evening though