After several false starts, a day when Big Jesper and I could hit the hills together, after a layoff since last July. Lack of fitness and a dodgy weather forecast weren't going to stop us this time - maybe. We had looked at the two hills from Fersit a few times and with the prospect of 80% chance of cloud free Munro's, seemed too good a chance to miss views of Loch Trieg and Lochaber.

Left Lochgilphead about 10 past 6 and successfully navigated our way to the car park at Fersit, about 8.40a.m., just as the rain came on. The cloud level was a little below the top of Sron na Garbh-bheinne, but once that lifted, we would be laughing! The walk over the River Treig bridge and railway line, past some cottages and barn, onto the hill is reasonably straight forward and as described elsewhere, soon emerges onto boggy moorland, heading straight for the steep looking, Sron na Garbh-bheinne. Heading off for Sron na Garbh-bheinne.

The rain stopped after about 20 minutes, but a stiff breeze was getting up and it was hard going, through some of the grassy, heather bits, or when snow was encountered about 600-700 metres, occasionally having to scramble over some rocky bits here and there. 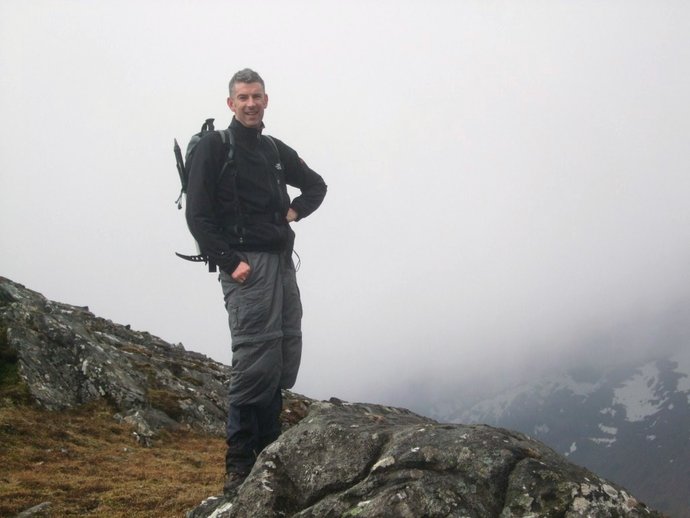 Bit of scrambling on Sron na Garbh-bheinne slopes, to avoid the snow.

We were just over two hours to the top of this stretch, thinking the hard work was just about done, but what was a breeze, had now turned into a gale and the optimism of clear views was quickly dashed, as we were enveloped in fog. It was a real fight to put on another layer and hold on to rucksack, gloves, etc, without being blown off the hill. Having removed gloves also meant the fingers were rapidly numbed with cold. At least now, there is a reasonably clear path to follow, though I was a bit surprised at the distance and climb still required to make the summit of Stob Coire Sgriodain, which we made in about two and a half hours. It was strange to think there was a wee lochan just to our east and a massive loch below us to our west, but we couldn't see 20 yards. 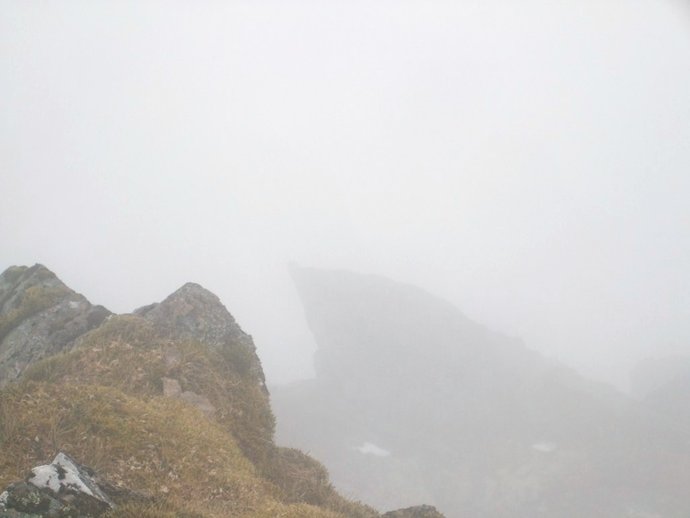 Very jealous of other photo's from that summit and how quick and steeply it falls away to Loch Trieg. A wee brew at the top didn't really help generate much warmth, as the biting wind chilled quicker than coffee could warm up. 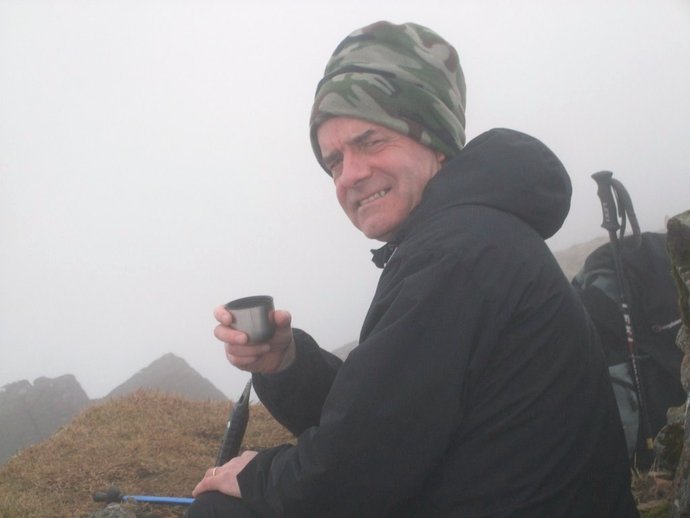 The GPS was now well warmed up, however as we set off on the SE'ly arc round Coire an Lochan. As described in various reports, careful navigation is required on this stretch. This was made worse by the near zero visibility conditions and we found the compass seemed to have taken on a life of its own, dancing back and forth round all the points. Anyone else experienced similar here?
Fortunately we were able to make our way round the various spot heights, finding some reassurance from tracks left by others across wide patches of snow, till we came to the last waypoint to turn NE, for the summit of Chno Dearg. The map was being blown around, compass still dancing around, vis was zero and I managed to come up with a different direction for NE, than Big Jesper. After a good bit of my dithering around BJ, worked his magic and the GPS confirmed we were truly making our way up Chno Dearg. By now I must admit my legs were feeling the pace, but you'd never have known the Jaf has been laid off from his running and hiking for months. The human gazelle!

Chno Dearg is as rounded as described, which doesn't make it easy to find the summit cairn, large though it is, but after some toing and froing we eventually stumbled upon it, having taken about an hour from the previous summit. No point dawdling about here in this freezing gale, so another bearing was taken for the trip northwards, although this time, I had my doubts if we were heading the right way, specially ten minutes later when we came to some steep, craggy stuff. The GPS confirmed we were to the south, so it was back to the summit and start again. We were still none too sure what was happening with the compass, or whether we had both made mistakes, but after a further couple of checks, we were sure we were definitely on the right track this time, again, picking up the trail of many footprints in the snow.

The descent here is relatively pleasant, especially in the snow, which was in good condition, till lower down, when a few deeper holes were stumbled into. I think we were just leaving the snow about 600m, as we emerged from the fog, into the real world again. It is still quite a long, boring trudge back to Fersit, but it gave us the chance to contemplate our few hairy moments and the views we had missed out on. 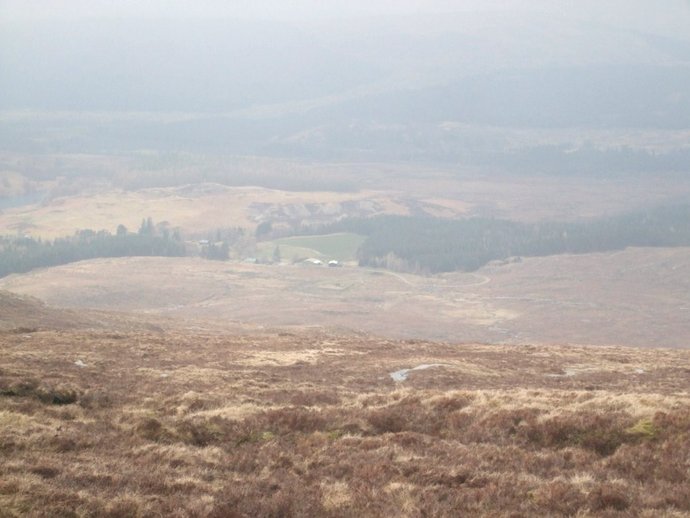 Final hurdle on way back.

Five and a quarter hours, back to the car, just as the sun came out. Very knackered, but, then a quick motor along Glencoe, followed by a lovely wee pint to finish the day at Bridge of Orchy, planning our next sortie, wherever that will be? Not much to photograph. All that can be seen of Essian's.

Re: Chno Half Hairy Fersit Trip.

Pity about the weather, there are great views from these hills. I'm impressed with your timing though, it took me another couple of hours to do this trip, perhaps that was photo time

Hi Jimbo, Didn't pick the best days for those hills, but hopefully next time the weather will be spot on.

Enjoyed your report Huff n Puff. Great photo's, too. As you can see, we didn't have much need to stop for photo's, though we did dither around, watching to see where compass was going to jump to next!
The weather just added to the challenge, BJ. We can't always have blue sky, I suppose?

Certainly looks like you guys had an experience building climb, shame about the weather......there is always next time!

davedanson28 wrote:Certainly looks like you guys had an experience building climb, shame about the weather......there is always next time!

Thanks, Dave. Yeh, was certainly my most challenging day, mainly due to the fog. Hopefully, learned a few things and cannae wait to get out there again. Weather not playing ball, as far as our shifts go!