As I set off from the excellent NTS car park on my sojourn, I recalled a joke which rhymed with White Coomb. A young lady was eating lunch alone at a restaurant and couldn’t help overhearing a discussion among four men at a neighbouring table. Said the first man, “Just spell it the simplest possible way—W-O-O-M.” “There’s a B in it, you dope,” said the second. “It’s spelled W-O-O-M-B.” “You don’t have enough letters,” objected the third. “I think it ought to be spelled W-O-O-O-M-M-B.” “Nonsense,” said the fourth. “It’s ridiculous to put in all those letters. Besides, there’s a final R. It’s W-O-M-B-R-R.” The young lady could stand it no more. Having finished her meal, she approached the other table and said, “Gentlemen, if you’ll consult the dictionary, you’ll find that the word is spelled W-O-M-B. That’s all.” And she walked away.

The men gazed after her with astonishment. “Do you suppose she’s right?” asked one. “How can she be?” said a second. “A slip of a girl like that! I’m sure that never in her whole life has she heard an elephant fart underwater.”

Back to the hill. The excellent path up to the Grey Mare's Tail elevates you in double-quick time. Apparently, there are nesting peregrines up here but I only saw a group of mountain goats and anxious sheep - me, here, with my reputation?? The great path was obliterated just past the spectacular Grey Mare's Tail by a tonne of snow. From here to do the whole round would require a good physical effort. However, I ploughed on and frustratingly could see damn all due to the cloud level sitting at about 650m. Was that White Coomb on the left? Was that Lochcraig Head ahead? I could only wade and hope it would clear. Before long however, my journey along the Tail Burn came to an abrupt and beautiful end at Loch Skeen. The babbling burn was silenced and a sound couldn't be heard save the bleating of mountain goats and a forlorn cry from a disturbed bird-of-prey. Bliss. I sat for 10 minutes and revelled in the serenity.

I felt a chill and set off again, heading for the E shoulder of LochCraig Head. As I floundered through the snow, I could see a group of mountain goats across the loch all huddled together. There was I suppose an underlying menace to the locale; if the weather changed and in the last 48 hours a huge amount of snow had fallen, it would be a rather inhospitable place to exist i.e. nae food. I began to climb steeply into the cloud and as I walked up beside the fence (which was more or less under 3-4 ft of snow), I entered a murky world of monochrome. The walk along to LochCraig Head and then down and up to Firthope was obscured by cloud and snow - it was difficult seeing what was what and eventually as I headed South towards White Coomb, it began to show itself. At last, some mountain views again. The summit was curiously bereft of snow and a small summit cairn seemed wee compared to some of the more popular hills. Yet, this was a wild place and as such, it was nice that not many had passed this way. The views opened up to Hart Fell and back across to Lochcraig Head. The descent followed a dyke and was treacherously slippy in places. However, it made for quick down-time and I was back at the burn in good time, just in time to meet the less well-equipped walkers hoping to see Loch Skeen. Jeans, trainers and the usual lack of preparedness. I bade my farewells and returned down past the Grey Mare's Tail. Another great Corbett day out. 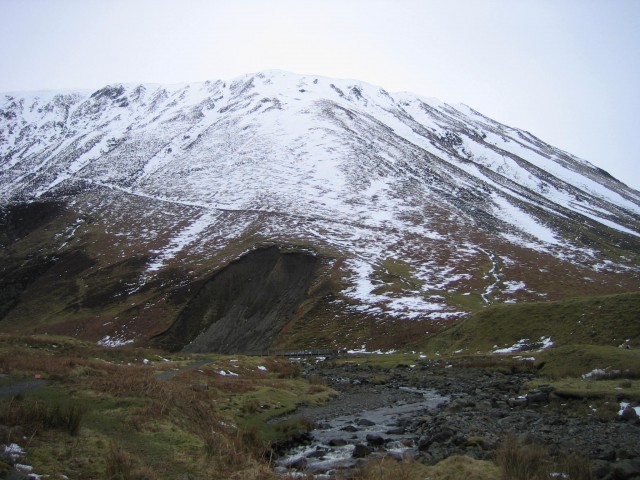 The good path can be seen heading towards the GMT 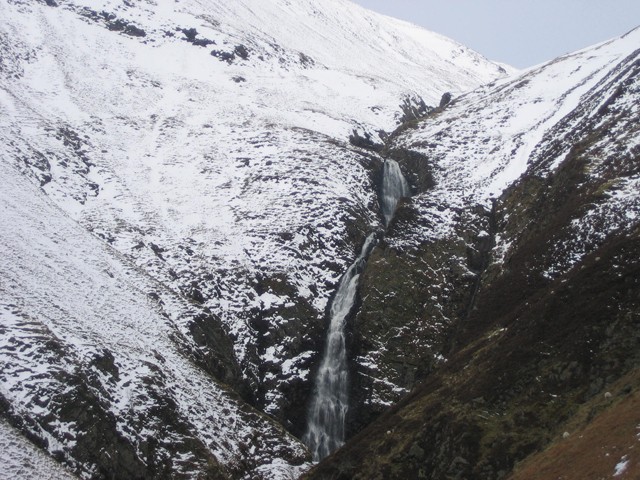 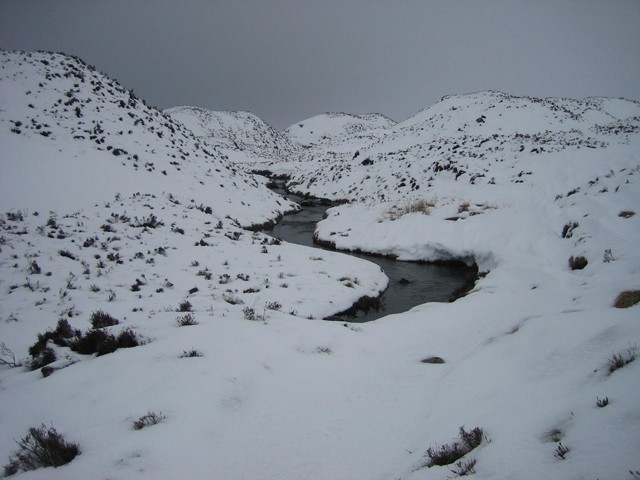 The Tail Burn path wends via the hummocks 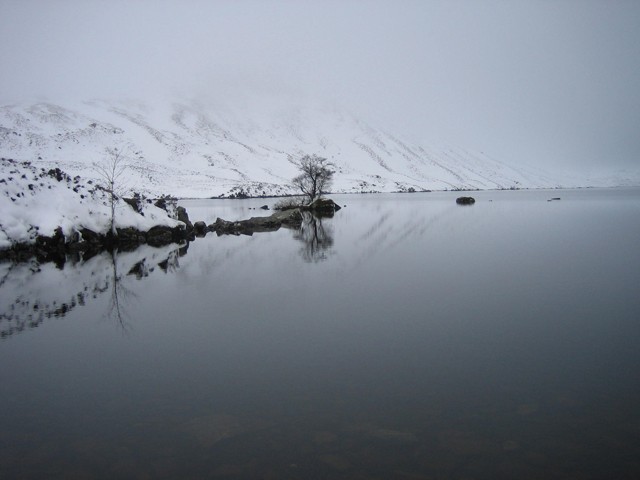 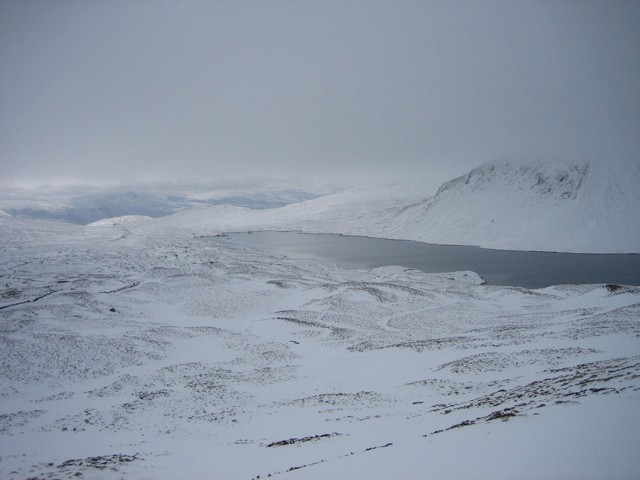 Looking back to Loch Skeen from shoulder of LH 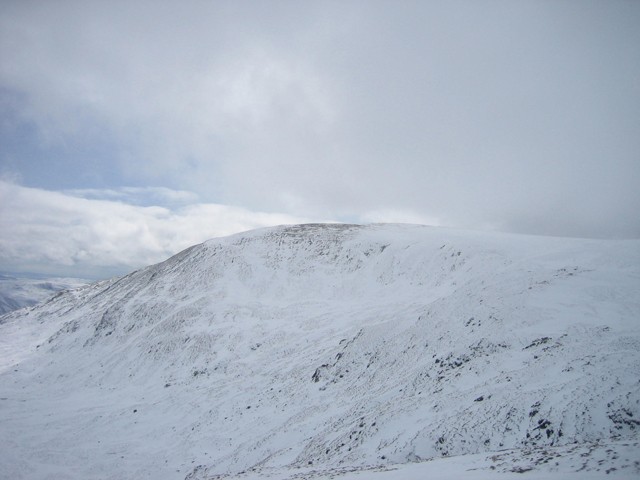 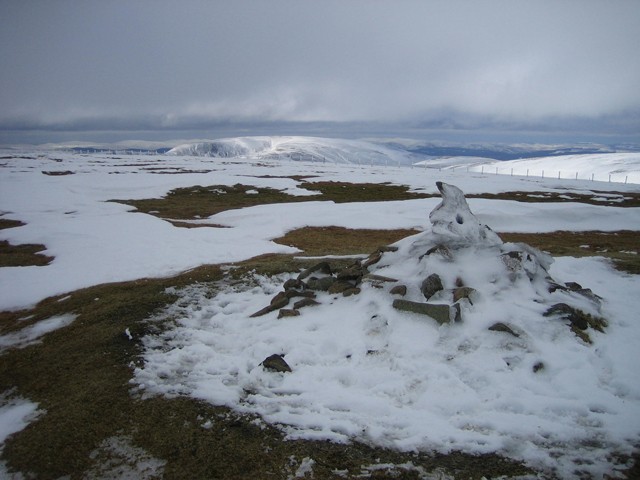 The summit cairn with Hart Fell in the distance 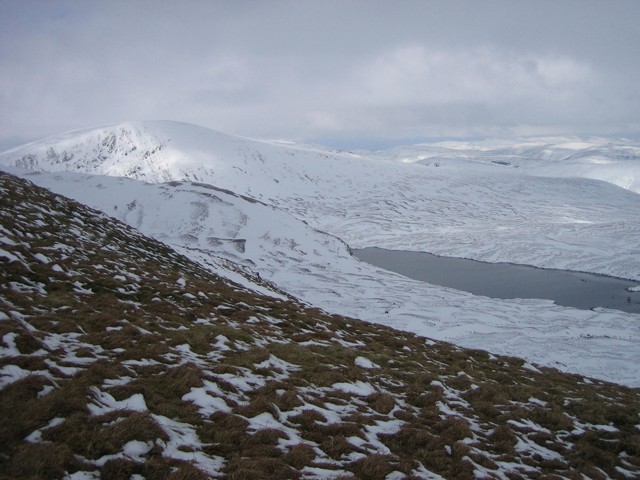 You are right well into Corbetts now...many many more good days out to come.
The cairn with the moat around it probably wouldn't be apparent when frozen up.

At one stage, when reading your report, I was transported back to the account of the massacre of Glencoe...17th century.....talked about as being ... 'an incident in the reign of William 111' some incident!!! Eh!....wherein Thomas Macaulay a 19th century man of many parts...describing what he thought of Glencoe....'mile after mile the only sound that indicates life is the faint cry of a bird of prey from some storm beaten pinnacle of rock'.

Take care when bathing in elephant pools the tsunami could be overwhelming.

Hi Kev,
Are you the Corbett killer or what?? Would that be one or two Corbetts slain every week lately?? Her indoors not letting you out to do real hills

Dont laugh but I dont get the joke. (must be getting auld). And as for the anxious sheep, are you making a confession here

Looks like the East got more snow that the West yet again kevsbald.. in Galloway there was hardly any ..yeah

I'm really getting into the Corbetts - only doing the Munros means you're missing out on some fantastic walks South of Glasgow - the Hart Fell horseshoe was fab and in the right conditions so would this be. Loch Skeen is beautiful. Think it'll be the Merrick next...

Also, they're only just over an hour away so easy to get home before my other half is looking for me. Don't worry, I have a few Munros planned for end of April.

Donny - having witnessed the fitness of some of the reports on here, I was unlucky to get such poor conditions it seems. Such is life.

Gaffr- thanks for the poetic 'compliment'.

Hi Kev,
No worries. Danny keeps telling me to include the Corbetts in my walks and he has some right corkers lined up for the coming months. Loved your report on Hart Fell

Enjoyed that report, had to consult the map as i had not a scooby where this round was located.

Further inspection on this route looks interesting, with various spurrs and ridges that could be added for a longer trip. May have to have a look into this sometime.

gaffr wrote:Take care when bathing in elephant pools the tsunami could be overwhelming.