Another week, another new area for me to discover in the hills. This trip was the first time I took a left at Tyndrum instead of going straight on towards Bridge of Orchy and onwards. The road leads across to Oban and is a nice wee bendy one which was a good way to start the day before bagging a couple of Munros. I was only out doing the Tarmachan Ridge a few days before this but I had been keeping up a decent level of fitness so I was confident I would manage fine.

The Walkhighlands entry for this group of Munros describes the route as clockwise but for reasons I can’t remember now, I decided at the time it would be a good idea to go round it the other way. So off I went up the steep hill behind the Falls of Cruachan Railway Station. As usual, within minutes I was sweating like crazy and panting away loudly from starting too quickly so I eased the pace off a bit until I got out of the trees and crossed what felt like a squinty stile when standing on top of it!

Shortly after, Cruachan Reservoir comes into view and I head up to meet the tarmac road which passes by it on the right. 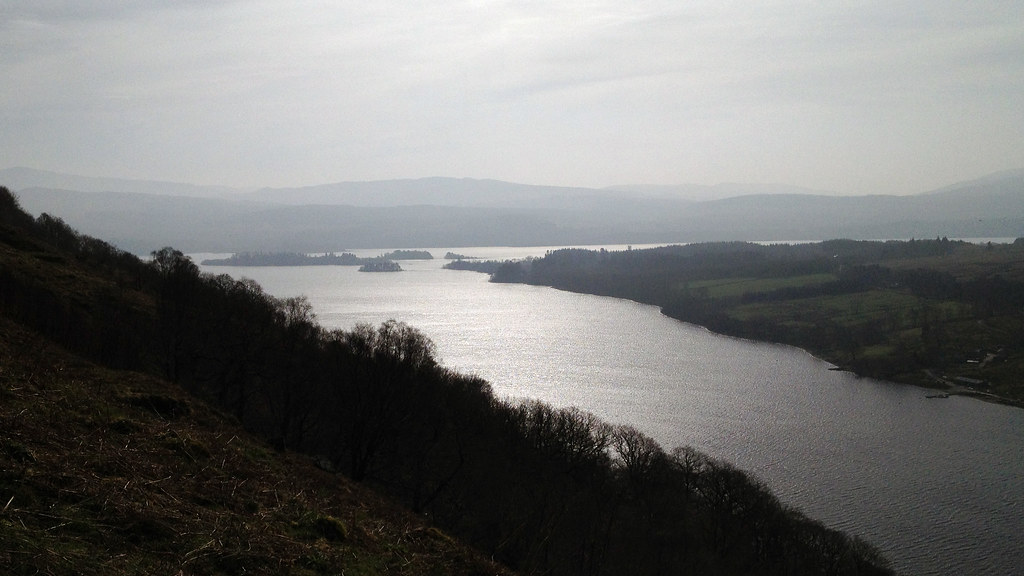 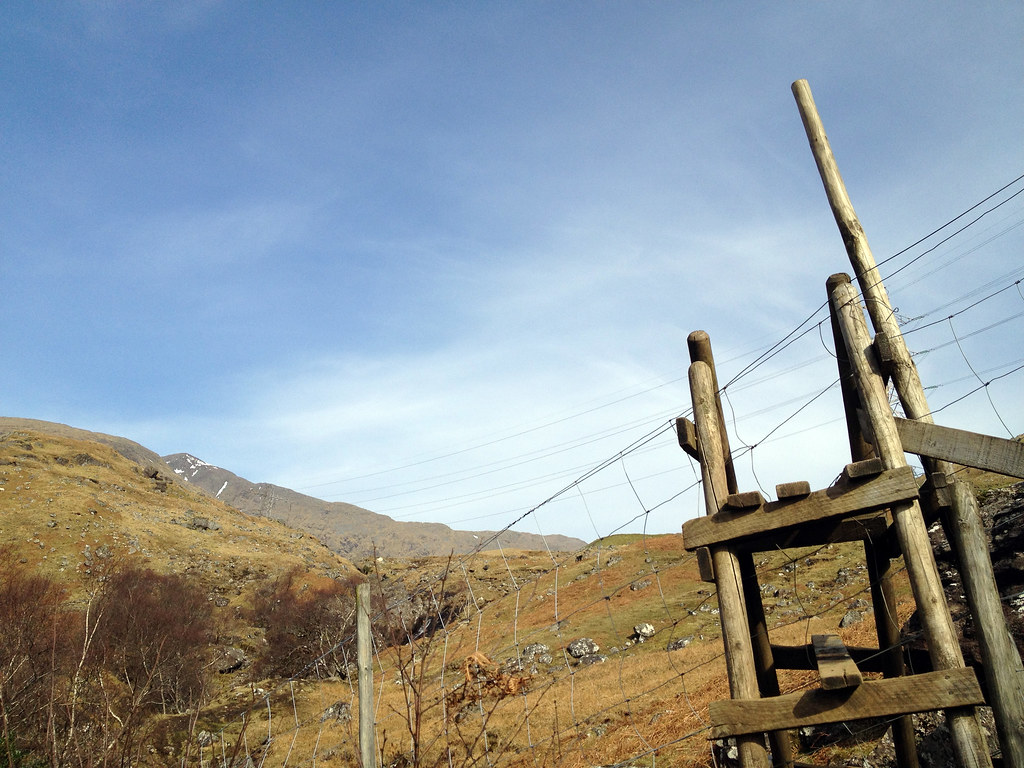 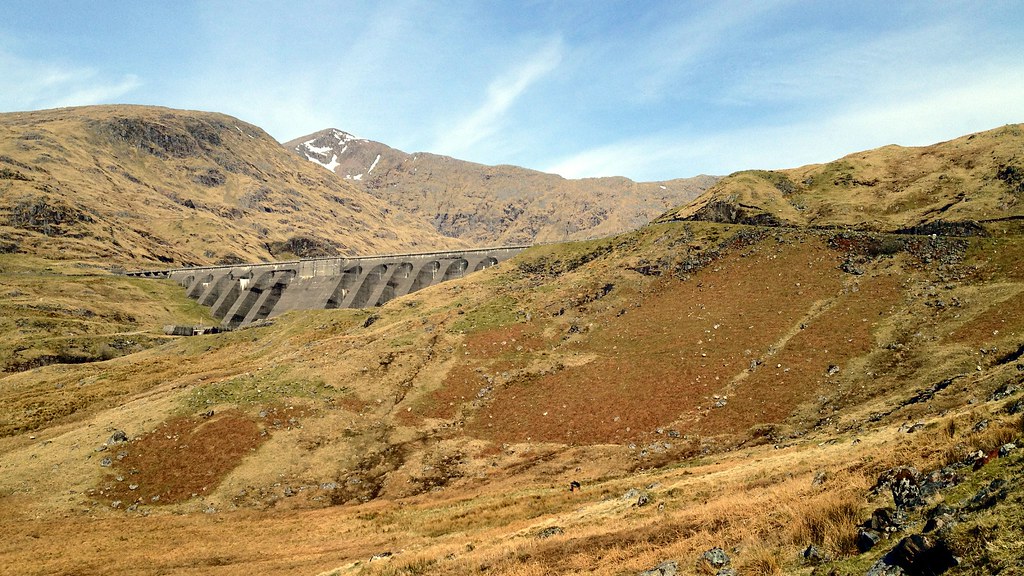 No matter how many dams and reservoirs I see, I am always fascinated by them so I took the chance to stop for a few photos and a wide panorama while enjoying the views of Ben Cruachan in the background overlooking the reservoir still with the odd patch of snow lingering around the summit. 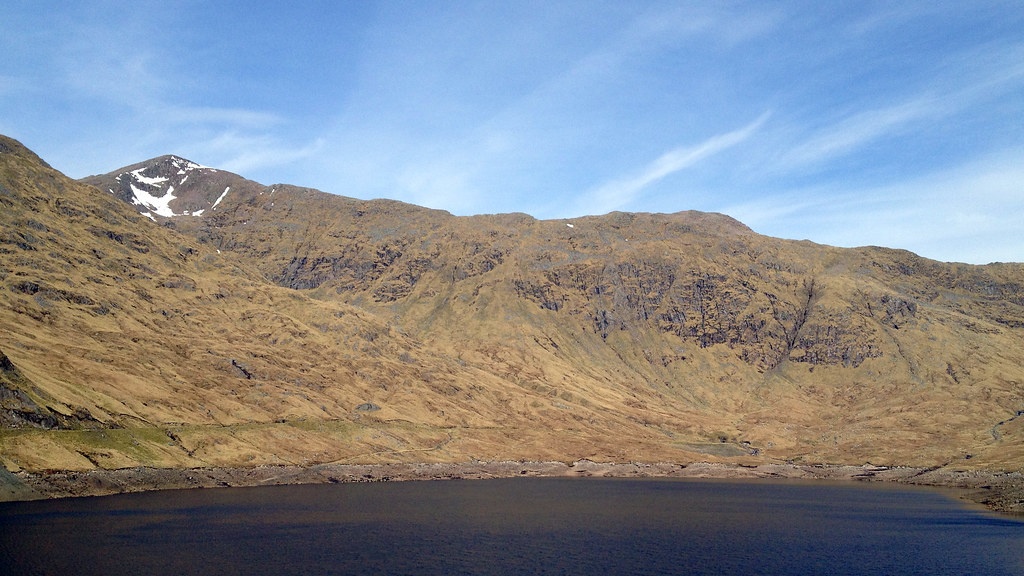 By this point a couple had caught up with me but I stayed ahead of them most of the day and never really seen them again. I stuck to the route for most of this section for a change apart from cutting the corner which heads towards a small bealach between Beinn a’ Bhuiridh and Stob Garbh. While slightly cutting this corner I passed a strange trig point like structure with a long, rusted metal pole sticking out the top. The pole could even be rotated around as it was loose. I’ve never seen anything like it so was quite confused. Was this a feature of all trig points previously or is this something completely different? 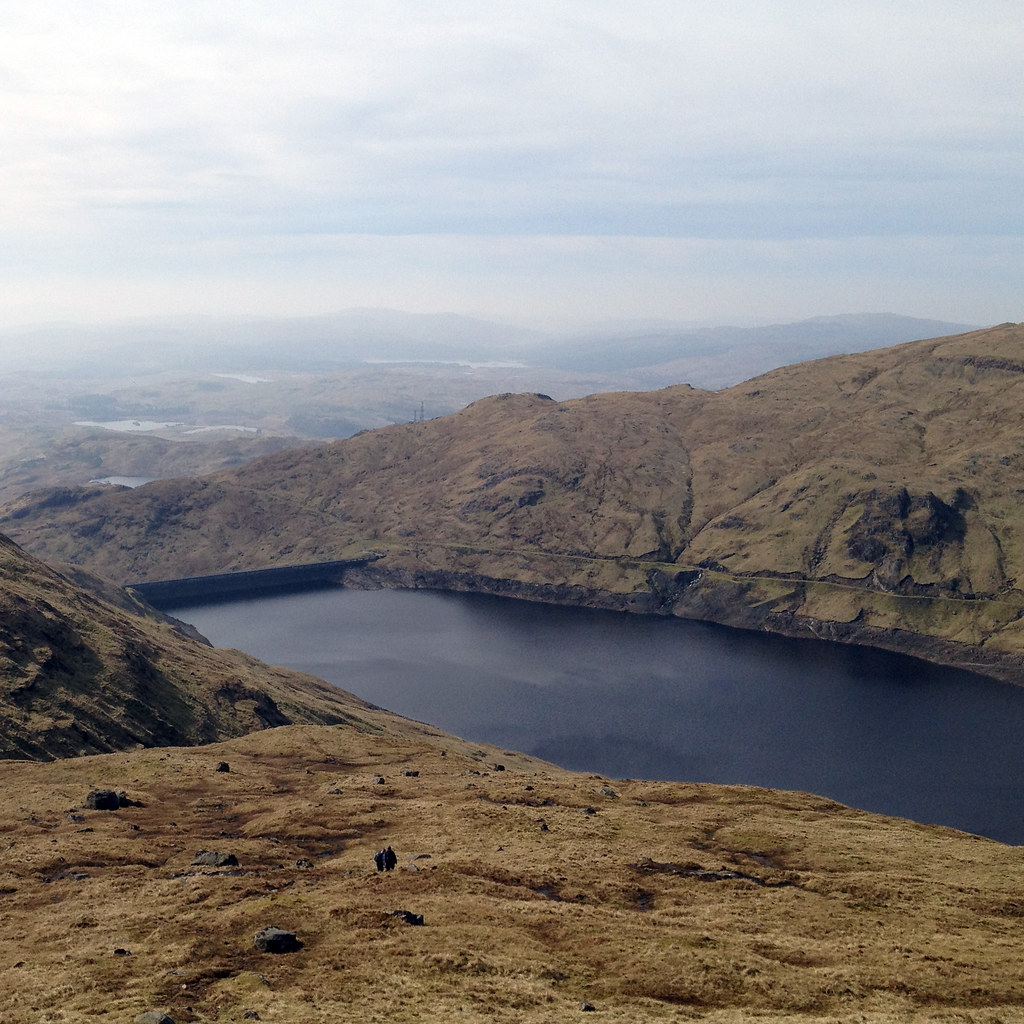 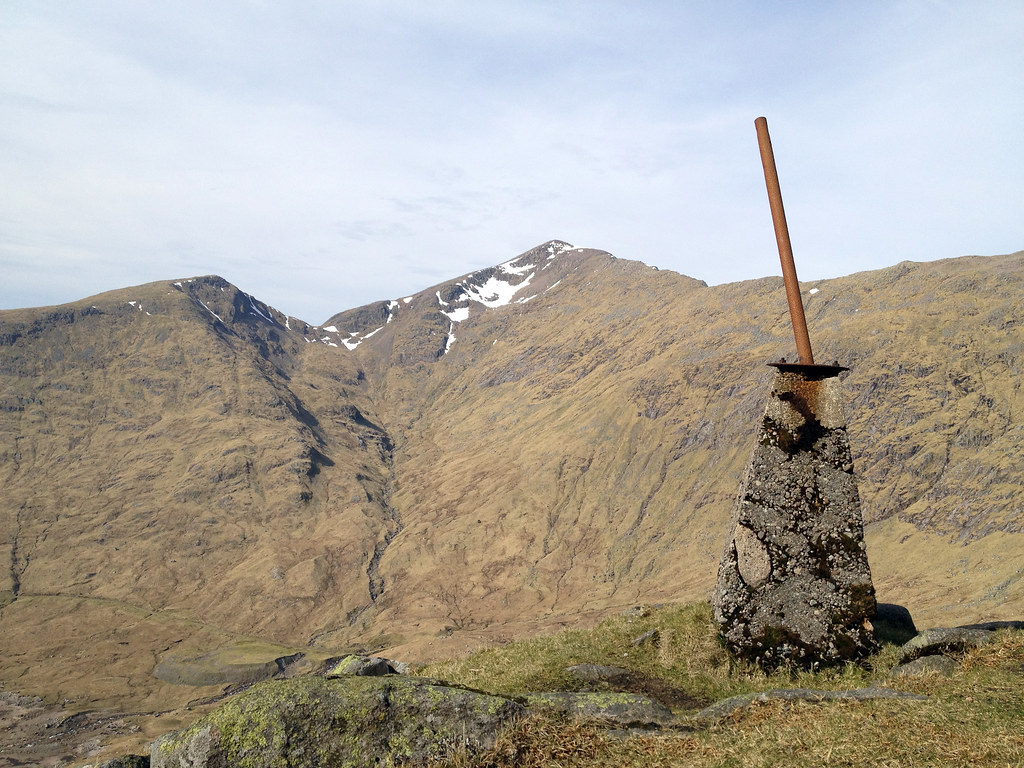 I powered on up the southern ridge of Stob Garbh which meets up with Stob Diamh and gives an easy saunter to the summit of my first Munro of the day with good views across the reservoir towards the pointy looking second Munro of Ben Cruachan from this angle. I love a ridge walk like this around a dam or reservoir so I was in no rush to finish and just took my time enjoying the surroundings and the view down Coire Cruachan wondering if it would be a good place to pitch a tent for the night on the relatively flat ground on the north side of the reservoir. 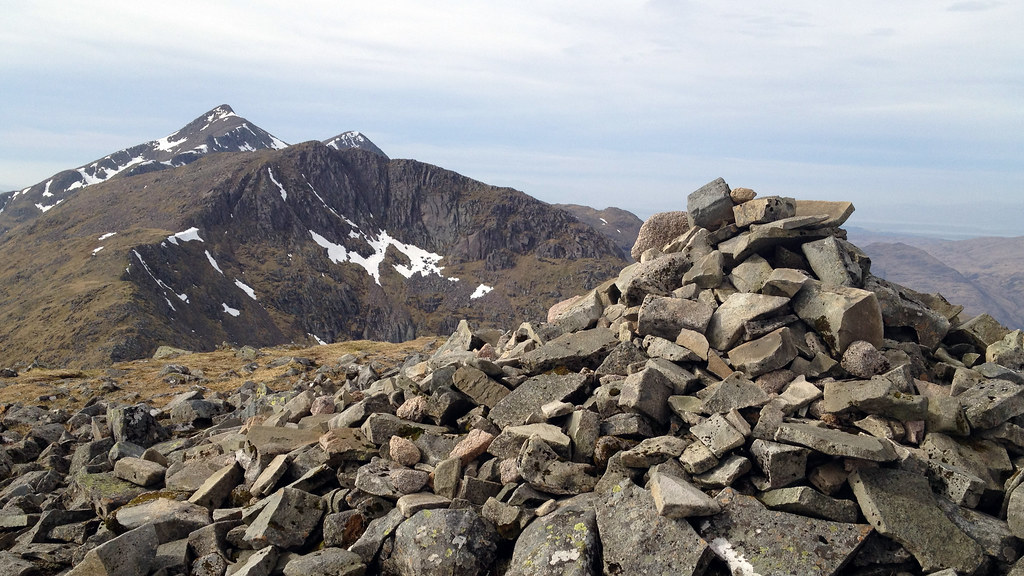 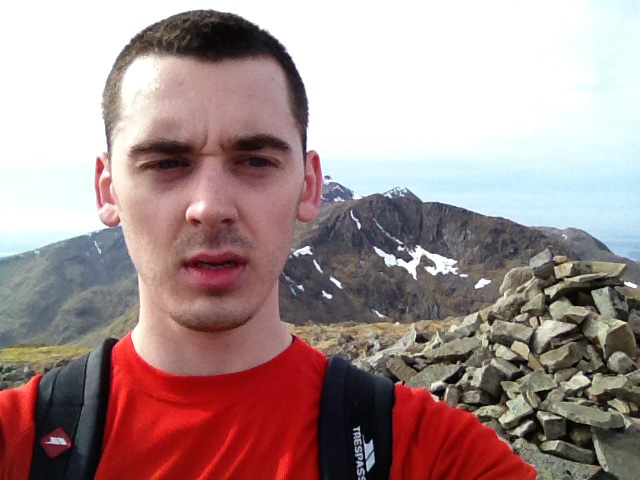 I moved on around the ridge towards the rocky summit known as Drochaid Ghlas. The ground was a bit scramblier here and stayed that way for the most part the rest of the way to the summit of Ben Cruachan which was enjoyable. 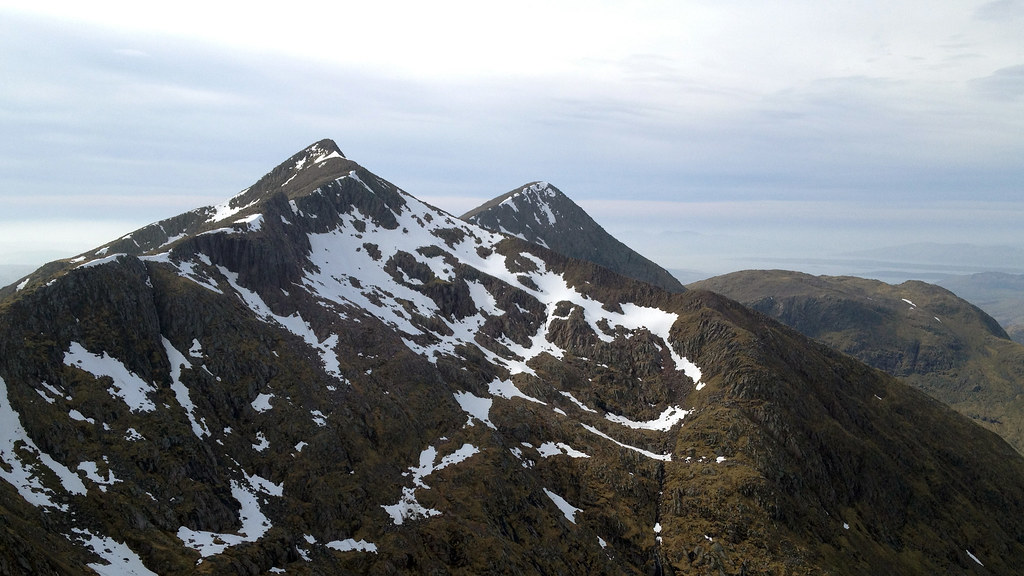 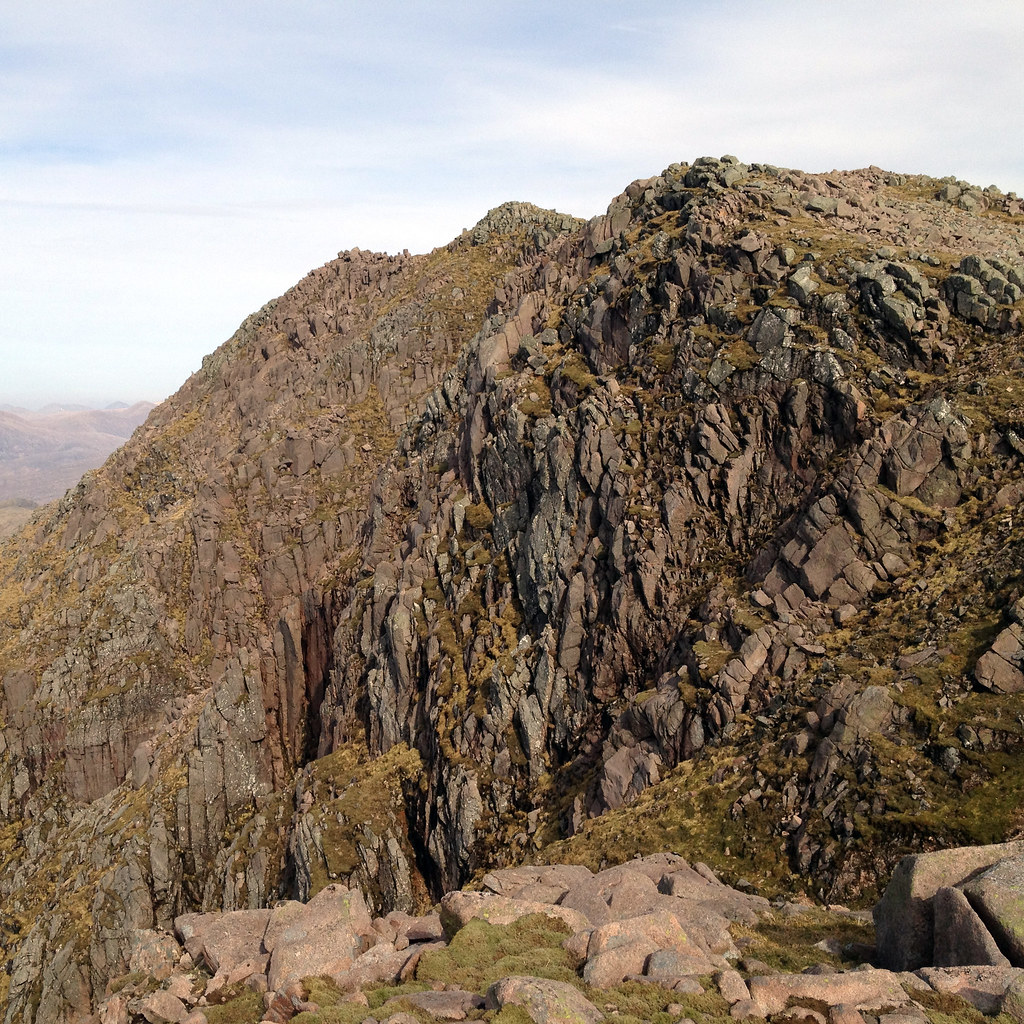 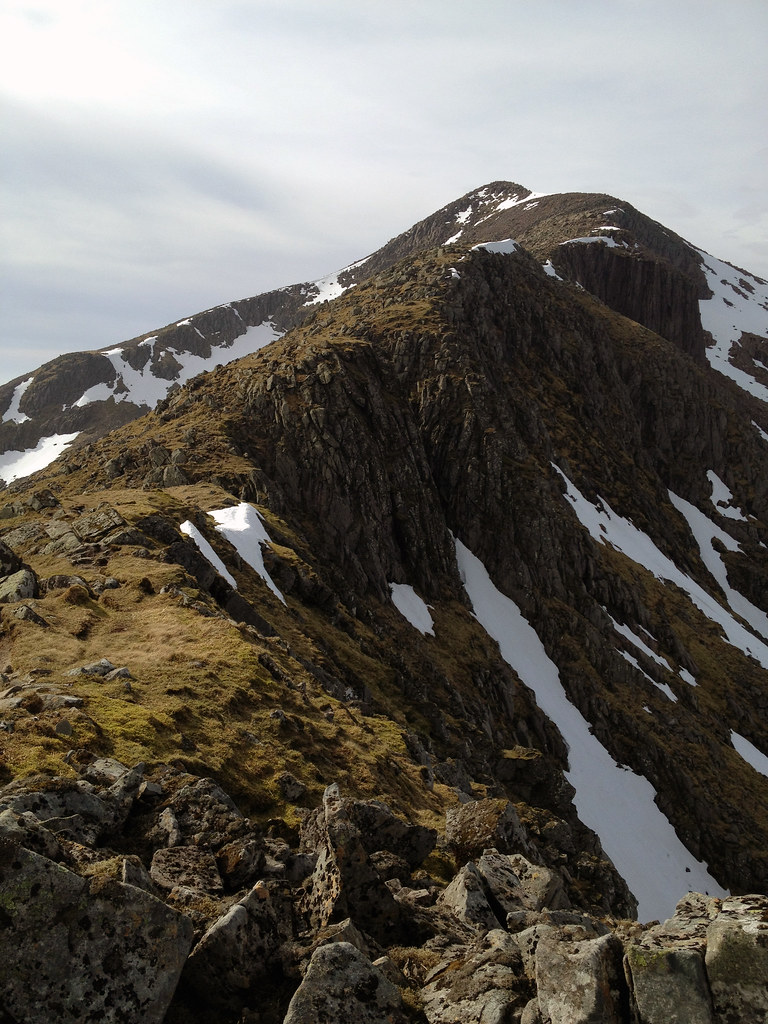 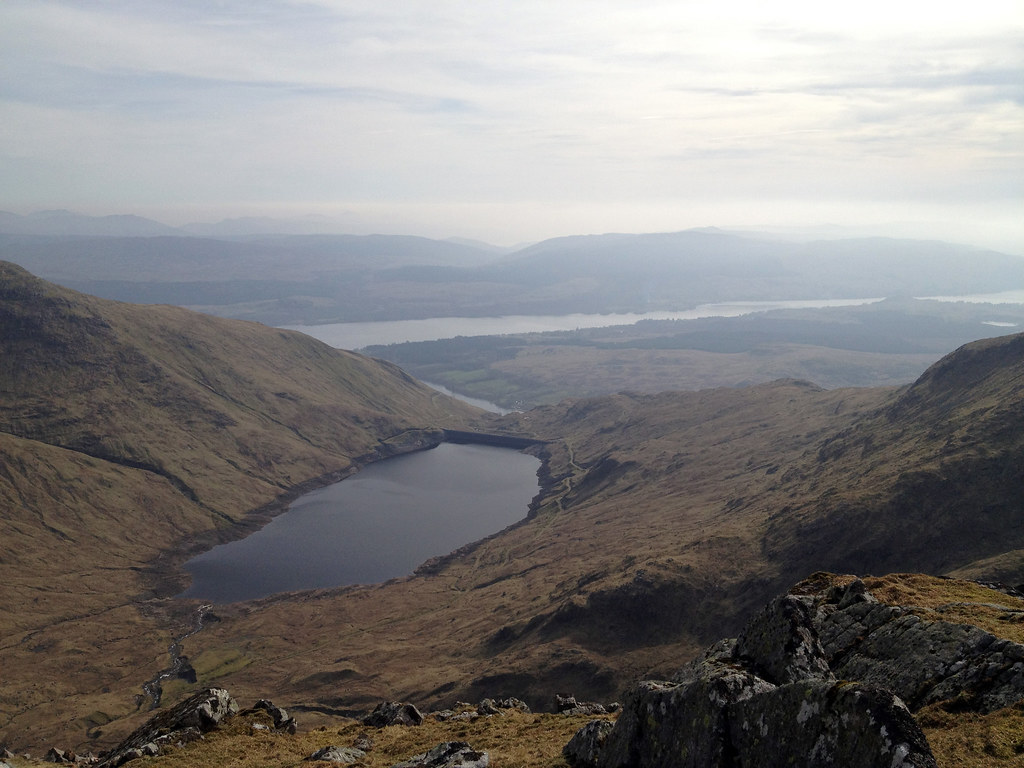 These are always the most exciting parts of the day for me, I love a good rocky scramble to a summit and as usual it was all over so quickly. There were even some small patches of snow to contend with but it was nothing deep or large enough to be a difficulty. Once getting to the top I had a brief panic that I wasn’t actually there yet and had to have a quick double check of the map to ensure I was on top of Ben Cruachan and the summit further west of me wasn’t it. I was fine though and what I was looking at towards the west was the Munro Top of Stob Dearg.

I considered heading over there too for some added length to the day but wasn’t sure if I would have the energy to make it there and back up Ben Cruachan again so I opted to head down and follow the route south as already planned towards Bealach an Lochain. Reaching my 30th Munro today was good enough for me! 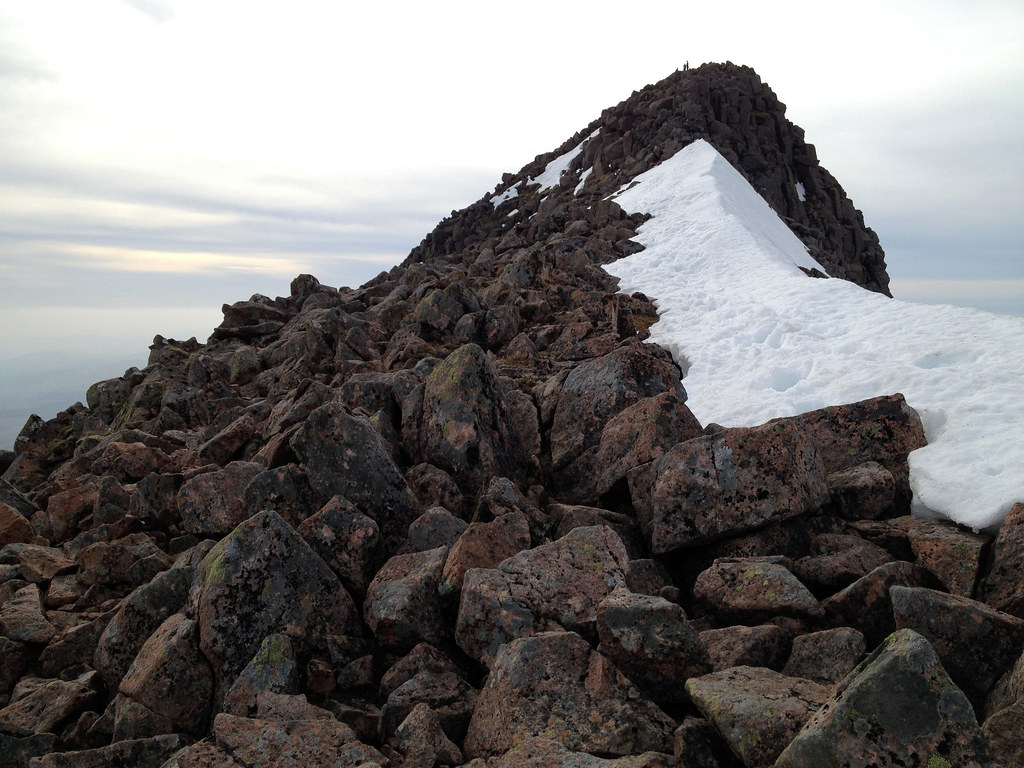 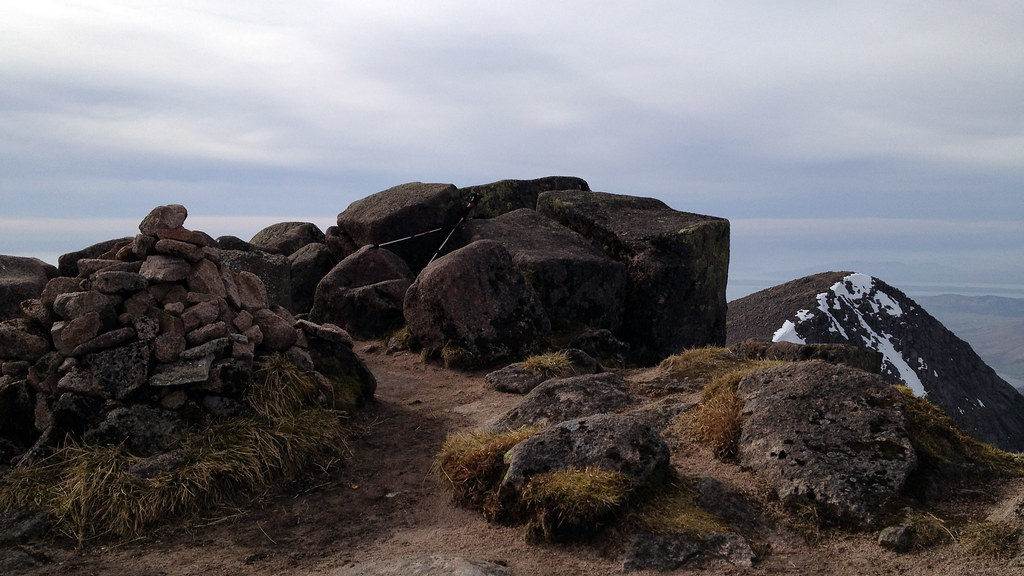 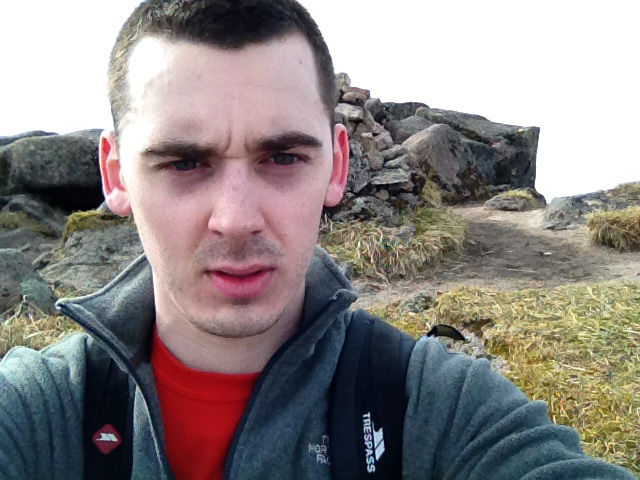 It was down here on the flat section of Bealach an Lochain that I caught up with two guys sat on the ground looking a bit worse for wear. They had run out of food and drink and didn’t seem too pleased about it. One of them was lugging around a huge camera and tripod which looked way too much effort for my liking. As usual, I had packed way more food and drink than I needed to be on the safe side so I offered them a couple of apples, a chocolate bar and some water to keep them going. I knew I had more than enough to see the day out for me so was happy to help them which they were very thankful for.

My good deed done for the day, it was back to climbing more hills. I wasn’t content with heading back down now for some reason so I decided to keep going south and take what was technically a short cut over the 918 metre high summit of Meall Cuanail rather than go around it to the east. This meant I missed out on a walk along the side of the reservoir but it made an enjoyable end to the day being up there off the usual beaten track and doing things a little differently. 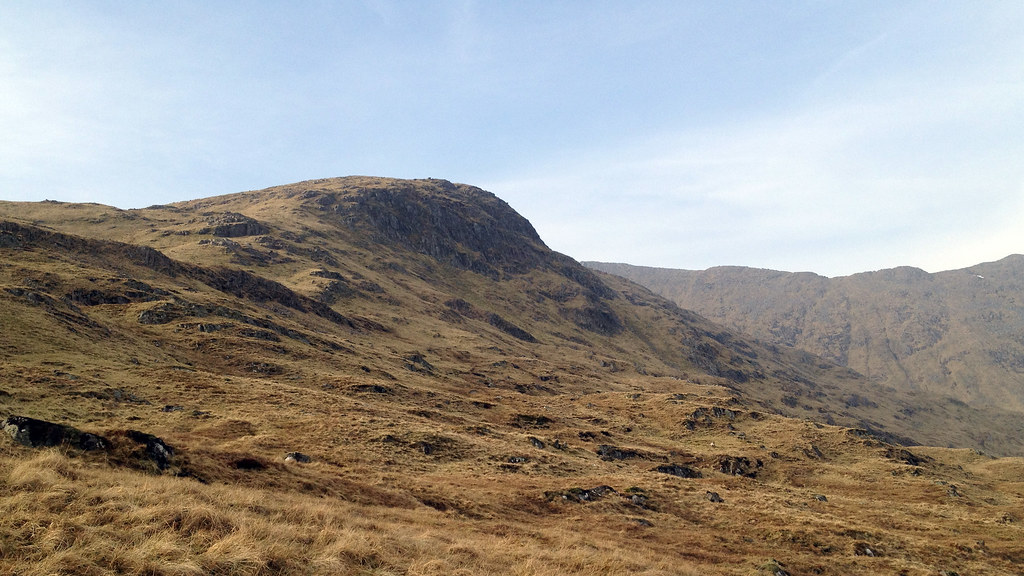 Once back on the usual track, it was a short walk back to the dam and the scary climb down the ladders. I had a bit of fun shouting and making noises into the one of the concave walls of the damn (such a big kid!

) then headed back down to finish the day with my feet in the water of Loch Awe. Or maybe it was the River Awe. Hard to tell where one stops and the other starts! 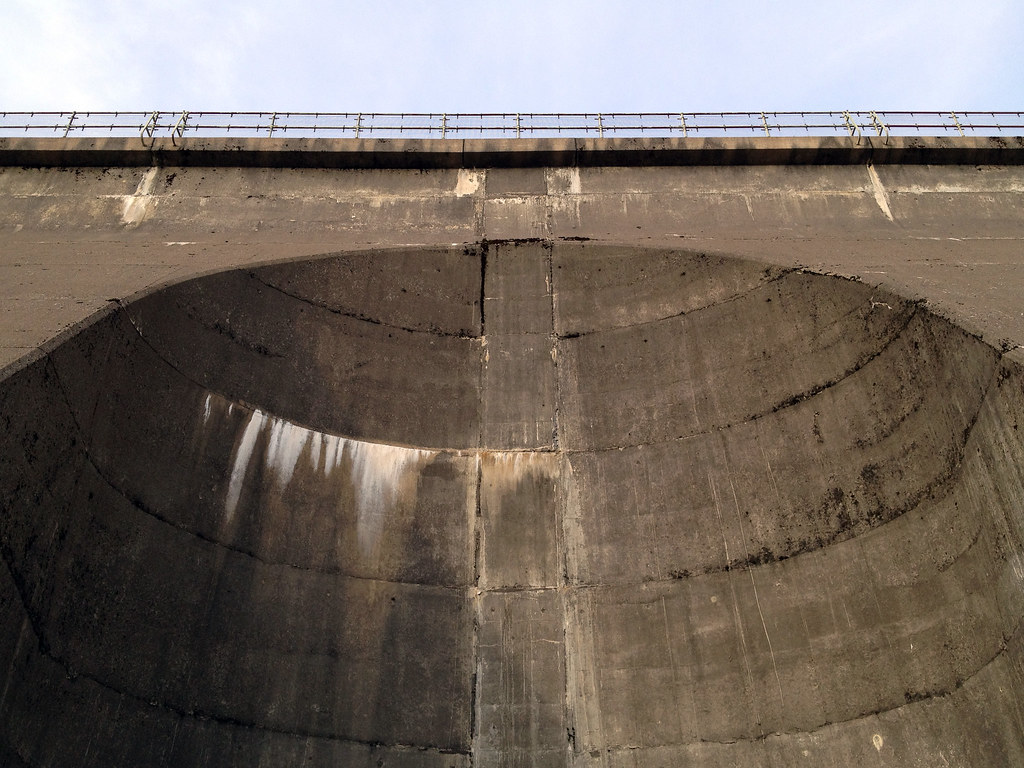 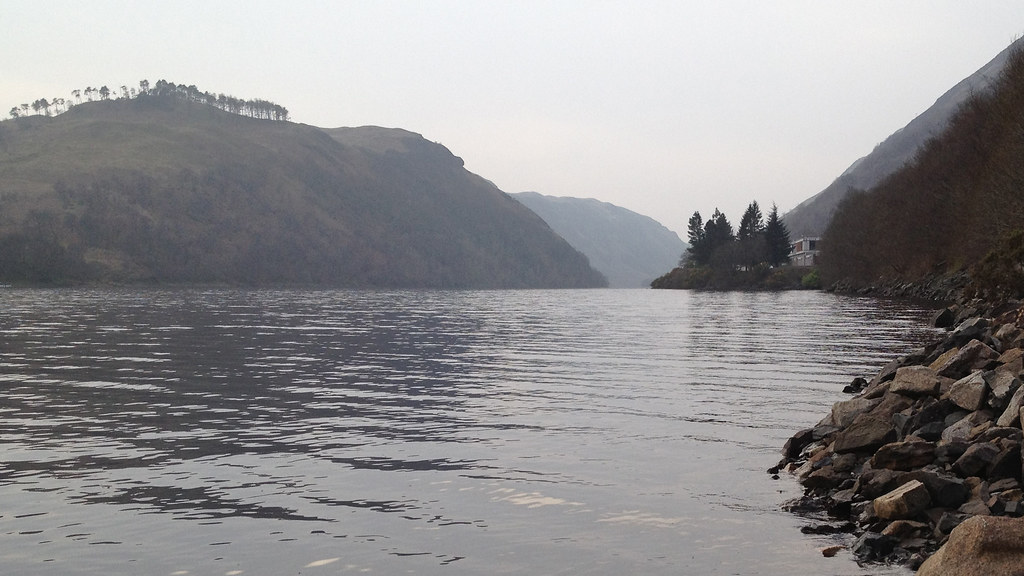 This was a cracking day in the hills for me. Nice weather, quiet day with not many people around and a fabulous horseshoe ridge to walk around. And not to forget the good deed helping out some fellow walkers!


1499080.gpx Open full screen  NB: Walkhighlands is not responsible for the accuracy of gpx files in users posts

nice one, Rossco - have to say, I'm another with an anti-clockwise preference

Haha the vast majority of the hills I've done are like that. I look forward to compleating in years to come then visiting all the ones I never really got to see!

Nice wee report and smashing pics there,, I did Cruachan (only) a few years ago in total clag so no memory of it at all,,will defo do it again when I return for Diamh.

Nice one Rossco, would like to do this one again as i did it on a wet claggy day and saw nothing.

Haha seems like I was quite lucky to get a glimpse of these hills and avoid the clag for once!