This was my second drive up to Ben Wyvis car park in three days. On Tuesday (the blizzard day) a friend and myself contemplated getting up and conquering this beauty but our better judgement prevailed. I could not let it lie though and was given permission from my almost full term pregnant wife to get it out of the way.
So with the thoughts of an instant recall looming in my eager mind I set off at 0600hrs arriving back in the familiar car park for 0715hrs. I took a quick photo of my target from a layby approaching the Dingwall roundabout. Incidentally I see this mountain almost every time I drive into Inverness from my home town, today it was looking superb! On my way over the bridge and through the gate, cracking on briskly following the stream through woodland using a well formed and maintained path throughout. After a wee bit catching the Wyvis brothers standing like two night club bouncers. Ben Wyvis and his wee mate Little Wyvis. Having studied the map beforehand I realised An Cabar would be a bit of a slog on what was turning out to be a great day and sure enough it was, however a good path was available zig zagging for a period. During my sluggish ascent up An Cabar I could see Little Wyvis peaking his head round another doorman to the south west, he knew he would need assistance to eject me from this club! Enough was enough where my footing was concerned. I had turned into what was referred to in the army as a "snipers nightmare". Every two or three steps I was going on my a**e so out came the microspikes as advertised by my friend HighlandSC last year. They were invaluable as the going was very hard icy snow during this phase. Having not yet completed a winter skills course I had to use what experience I had to deter me from going anywhere near the snow formation hanging over the corrie to the south east. I crazy ski course in the army featured heavily as an anchor when looking at this.. Success! I hit the summit phone call free after a couple of hours and then had a cup of tea before taking some photos of this magnificent part of the world. 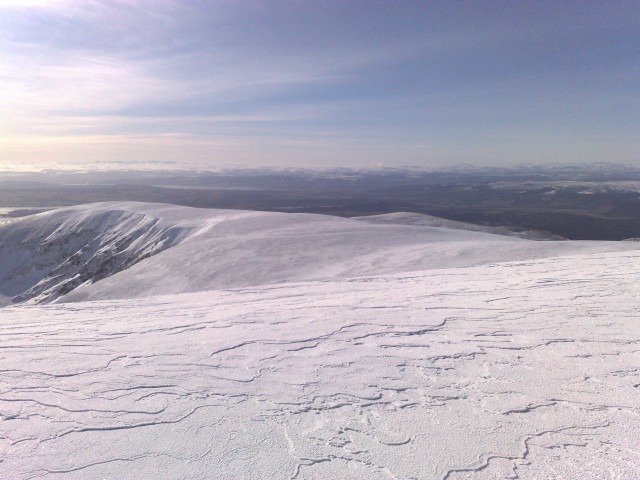 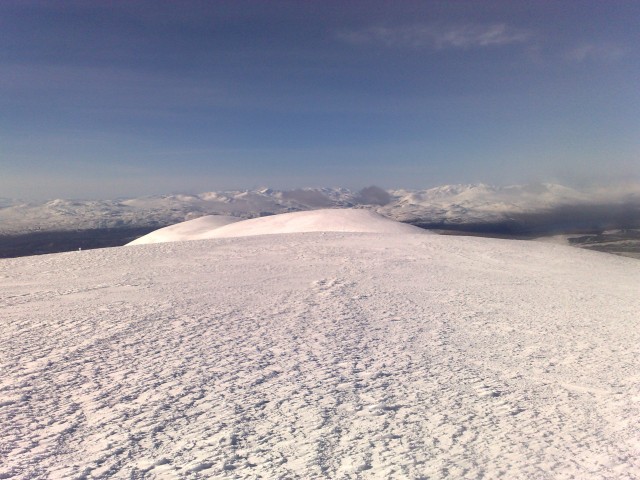 The sun shing on Little Wyvis on the way back down, I kept singing the "Different Strokes" tune that day for some reason. Back down the icy slope of An Cabar I remembered to pick up my shopping on the way back down having left it on the track by the stream. When I returned to the car park the sun was shining and more folk were embarking on a great walk. Amazing stuff Sid, love the shot looking back over Lil Wyvis. But one question, what are you gonna do with all those rocks?

Possibly a reasonably sized cairn in the back garden. Or maybe broken into many pieces to take care of my kids birthday and xmas pressies until he's 18!

Spikes sounded ideal for the plateau. Here's next winters present-to-self for you, nice set of G12's, to get you up the pointy hills no bother

http://www.grivel.com/Products/Dettaglio_ramponi.asp?ID=5
http://www.walkhighlands.co.uk/Forum/viewtopic.php?f=20&t=3545&st=0&sk=t&sd=a#p21092
Had to break them out for the first time a few days after Drumochter, on Lochnagar - no chance of progressing without them. Although idiot me didn't take ice axe and that was it, game over! (in the U-turn and go home sense that is - I had visions of it being the slipping down the cliffs version!)

Might nip up the road myself to visit Wyvis before the snow goes - fancy completing what will be a trilogy of Wyvis ascents - the finale being to do all the tops.

Similar to you, I eye it up every day walking through Inverness.... Bloody hell, that's some stack of snow round the trig point! I was also planning on heading up there yesterday, but couldn't get out. Might try tomorrow, as weather is looking OK. So the snow is hard packed rather than deep drifts thhen is it?

Ben Wyvis also features quite large in my life as well, as I can see it from my house, and office, as well as most of the route between them. (HighlandSC seems to have taken that photo just outside of my office actually!)

Hey Malky! Aye the snow certainly a few days ago was hard packed for sure. Have a good one today on Ben Wyvis, I'm heading down to Geal Charn (Monadhliath) today. Leaving it a bit later though as its meant to brighten up in the afternoon!

Thanks for those piccies - was interested in your pics looking down An Cabar 'cos had been wondering how horribly steep it was in the snow (due to my cowardice). However, I'm fuming now having read that because:

First of all, I was there last week, with slightly less snow but Big Wyvis was in fine condition...

I parked up and headed off determinedly towards An Cabar and saw, to my surprise, 2 guys were coming down already...
There was another guy having a coffee on a rock by the river - I asked him which Wyvis he was going for and, to my surprise, he said he'd also just come back down from his ascent of An Cabar. I asked why and he said it was so windy up there he couldn't stand up and found it really dangerous. Now I hate high winds and also, being very tall but weighing almost nothing, I get blown over very easily so thought I'd probably best give up my great plans and do Little Wyvis instead. I did look up at the sky and think to myself it didn't look particularly windy though...

So I went up Little Wyvis which had no snow at all and was just a bog - I'd far rather have done it in the conditions in your fine pics of it! When I got to the summit, it was a little bit windy and very cold but certainly nothing I couldn't cope with! I spent the whole walk looking at Big Wyvis in his fine condition and fuming!

Got to be some of the best pics I've seen from Wyvis... Looks like someone had a long glissade too

Well done mate, remember you have to do it again, with me and the Hot Dog.

Good to see that you are out and about......what some folks will do to get a few stanes for their rockery!
Will you be following the Piper's burn today?

Poor MC ...just missed the third big snow dump of the winter...snowed down here for two days and three nights.

Scott I will have my pennies saved in my coin jar for my crampon investment dude, you know the craic!
MC we will be doing Ben Wyvis again in coming months, you are more than welcome to tag along with some squaddie riff raff!
Gaffr!
Never followed the Pipers Burn today pal. Just a straight up and down jobbie!

Remember 15th May for the next hot dog meet up!

Ah yes, the coins lol. Took me a good 6 litres of mixed copper and silver to get crampons!

sid0995 wrote:Hey Malky! Aye the snow certainly a few days ago was hard packed for sure. Have a good one today on Ben Wyvis, I'm heading down to Geal Charn (Monadhliath) today. Leaving it a bit later though as its meant to brighten up in the afternoon!

Cheers for the advice! Had a great day today (report to follow), but if I hadn't read your report I would have left the axe and crampons at home. Didn't actually need them in the end, but the conditions were certainly icy enough that I'm glad I had them just in case. Can't believe all that fresh snow consolidated so quickly!