Our first proper walk together for a while, and a return to lonely Glen Roy after doing Beinn Iaruinn back in July 2003.

Forecast to get windy later so left home in Helensburgh early, but still didn't manage to start walking until 10:50. Already breezy, but weatherman had promised a substantially dry day with cloud breaking off the tops in the afternoon. This is not what we got!

We parked just before the sign telling you that you have reached the end of the public road, walked around the estate lodge beside the river (fork right at the track junction, and then through a gate onto the river bank), but it has to be said that there were no signs to stop us walking through, and the place seemed to be deserted.

Glen Roy is interesting for its "parallel roads" - remnants of the shorelines of glacial lakes at various levels as the ice retreated. You can just see some examples (not the best) on the far side of the valley in this picture: Climbing into Glen Eachach there are plenty of steep valleys all with waterfalls, which were fairly full - partly snow melt. We had considered ice-axes, but there was hardly any snow - just some small pockets, easily avoided - and so were glad we hadn't lugged them around with us. From here on the rain became constant, gradually turning from a steady drizzle to heavy rain, so sorry, but no views worthy of a picture. We walked up Glen Eachach to the watershed, and then easily (in cloud now) to the northerly Carn Dearg, and then slightly more steeply up to the other one. 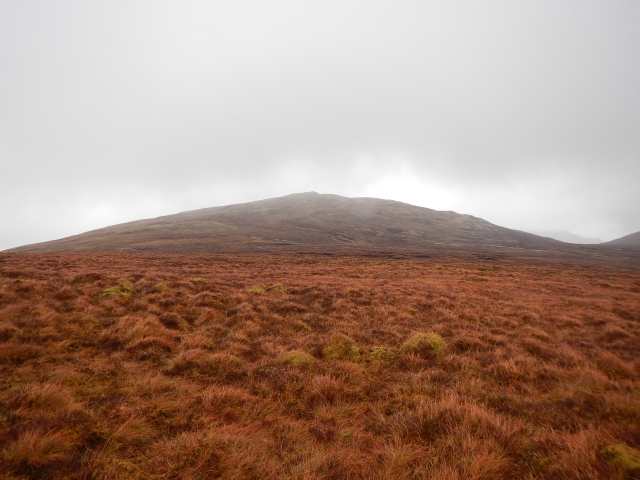 Carn Dearg from Sron a Ghoill

Finally a wet walk straight back over Sron a Ghoill to the car.