I checked the weather and it wasn`t to be too bad after 12.00 , so with Jim joining me , we drove to Dumbarton to catch the train to Helensburgh, which we got without paying

We made our way to the start of the John Muir Walk, at Helensburgh Pier, a walk which stretches across central Scotland from here to Dunbar on the east coast , birthplace of the man himself.
It was bright but breezy as we set off. 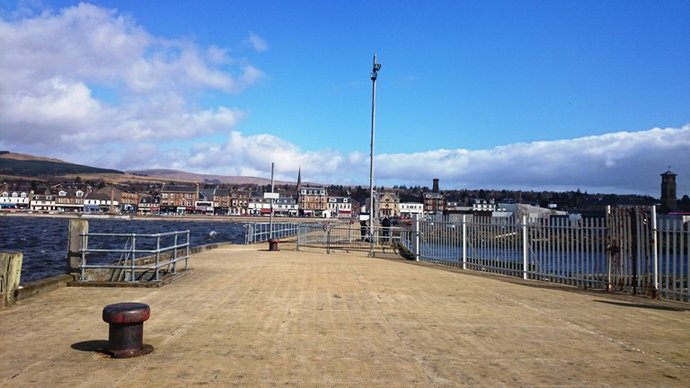 the view in to helensburgh from the pier

It`s a straight walk up the street from the pier, and if in doubt there are lamposts with signs marking the way. Eventually you turn right towards the main A818 road before quickly turning left again, following the signs for Mcintosh`s Hill House. 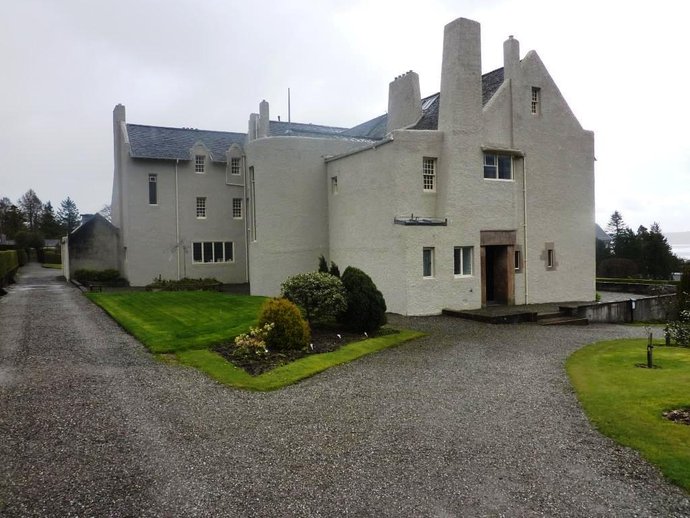 We walked around the gardens, stroked a friendly pussy

, but decided not to go in, the front door not too inviting and we didn`t want to get delayed on our walk.
We continued up the road towards a woodland path , again well signposted

, through which we walked back towards the A818. A little further up on the road , past a reservoir on the left is a duck pond , Jim told me he used to skive up here on his deliveries, which we stopped at and fed the ducks, and seagulls and coots and the occasional labrador who came by 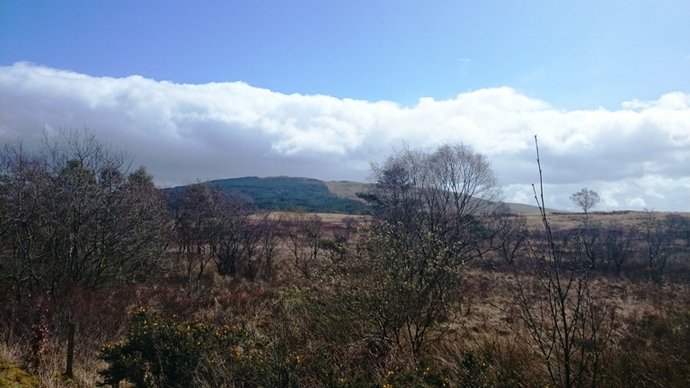 We could see the summit of Ben Bowie which we would visit on a detour of the walk about halfway through.
As the WH route describes, the path turns right towards Ben Bowie, and again is well signed. 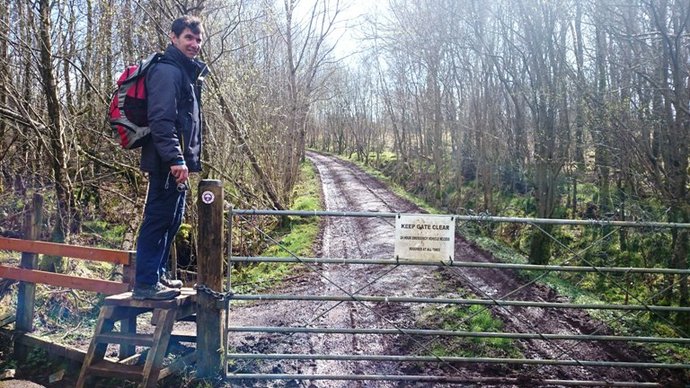 The path up was a reddy, muddy landrover track, but easy to walk on and led all the way to the forest descent on the other side of the hill. Pretty soon we were flanked on both sides by thick forest.
We got one wee glimpse through the trees towards Loch Lomond before we started looking for the detour path to Ben Bowie. 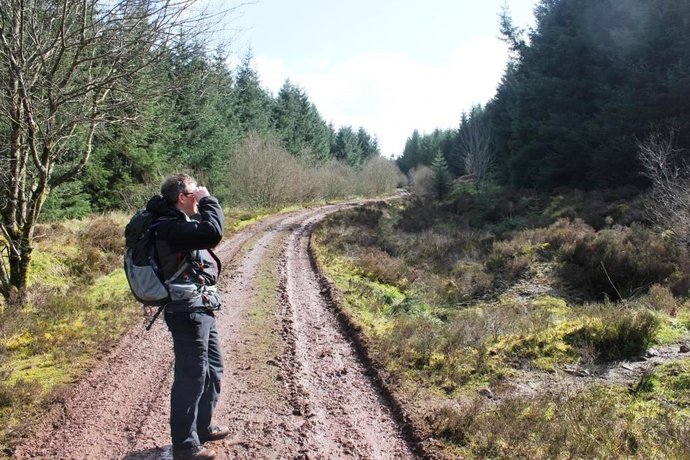 We ignored what we thought might have been a walk through to the top of the hill on a faint path and carried on looking for another, but in hindsight, I think that would have led us up. Further up we met a crossroads of the JMW and The 3 Lochs Way, and we could see the edge of the tree line which looked easy to follow to get up onto the top of Ben Bowie. It was a lovely day now , with just the odd 5 minute rain shower, so we were hopeful of nice views. It was here we met some walkers, who were undecided which way to go, but after checking our map, followed us up the hill to descend back to helensburgh. Them and there dog, which took a bit of a dislike to me, let us walk on , before following. A couple of minutes later Jim turned to his right to point at the fence , which had something hanging from it. It was a deer , a dead deer ? As we approached it we realised it was still alive, although not moving except blinking it`s big doe eyes

it`s leg had got trapped as it attempted to jump the fence and it was knackered from all the thrashing about it doubtless did trying to free itself. It`s leg din`t look broken , but there was a lot of skin removed and it was probably in agony. One of the other walkers helped us free it from the barbed wire, but as it leg fell free it didn`t get up and run as i expected, just lay there. 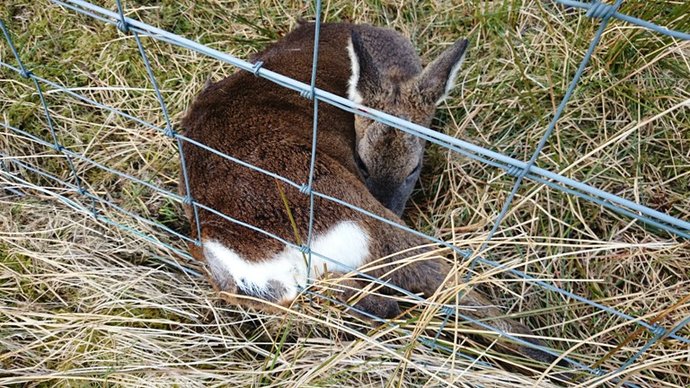 
We phoned the SSPCA , and eventually left it lying to make our way to the summit , hoping it would recover from the shock and tiredness before our return.
The views from up here over Loch Lomond and the clyde estuary were great, but it was really windy without the shelter of the trees, and that spoiled the enjoyment of it a bit. It was nice and bright and you could sit up there for hours taking in the views. It looked like we were right on the Highland Boundary line ,looking across to Conic Hill but the wind cut our stop short as we grabbed a quick bite , and a few snaps before heading back towards the path. 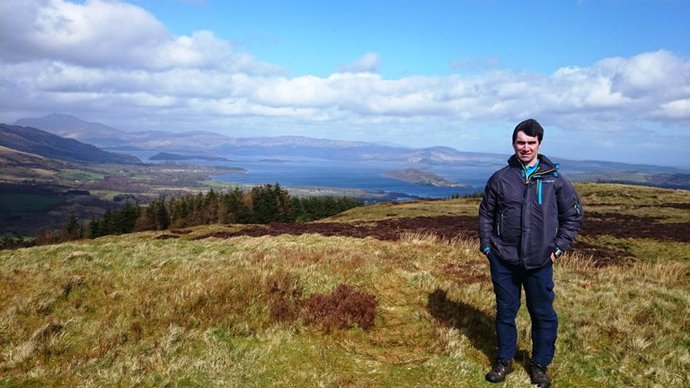 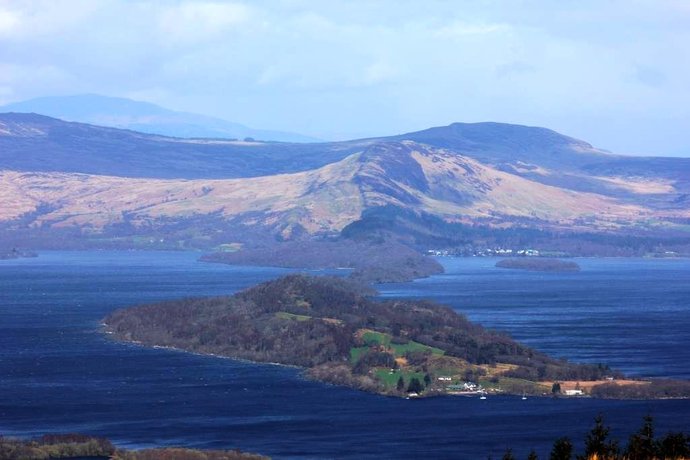 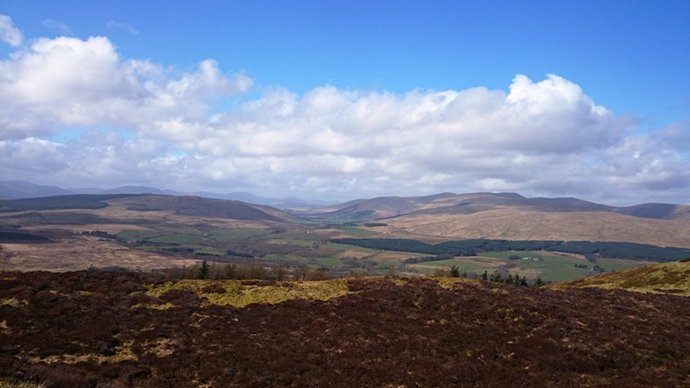 across to Glen Fruin ?

The SSPCA phoned us back to see if the deer was still there, which it was and we left it in the hands of the authorities to come look after it. Once back on the path there`s a viewpoint to take in , with great views across to Loch Lomond again , as well as a christmas decorated tree. 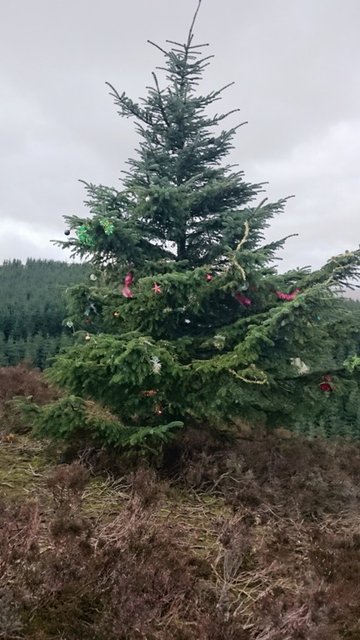 WE came back down from here and back onto the path which was now descending down into the forest and it was getting a bit muckier, probaly because of all the rain lately. Further round there`s a wee lochan, kinda looks man made, but a nice wee spot on the way. Approaching the forest it was getting even more muckier and there was red and white tape tied to the trees to show you which way to go through them. We met a local woman and her son here, she was looking to see if there was a path constructed yet , as the official opening of the walk was only a week away, she also told us that it`s the kids from her son`s school who go up every year to the christmas tree to decorate it. As good a reason as any to get kids out into thehillside. It`s a steep slippery slope getting into the trees and if this walk is to become popular, a path will need to be made through it as it was already quite churned up and slightly dangerous to walk through. 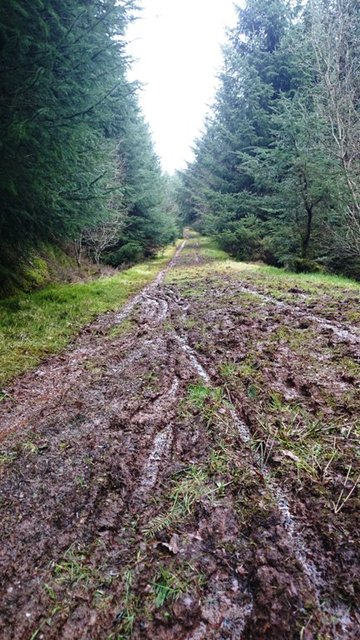 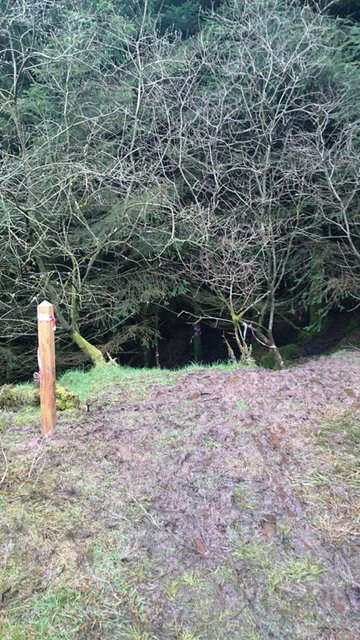 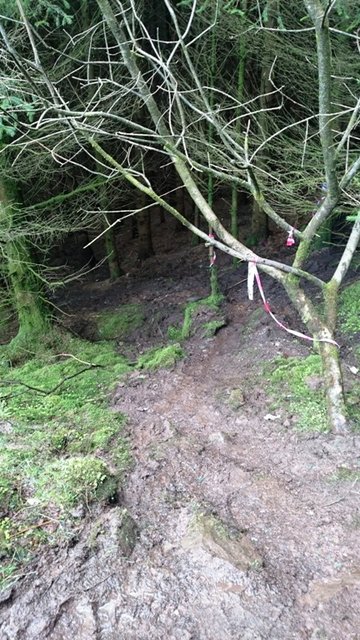 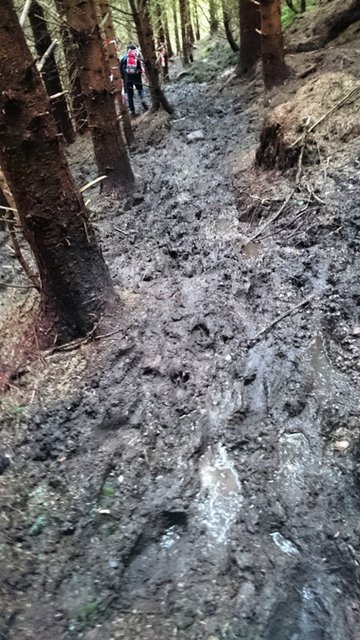 A short walk through the mud brings you out to a fire break which you follow down out of the forest. This has to be negotiated with great care also, Following a line of fence posts, mainly just stumps to be honest, which still have the old fence wire lying twisted amongst branches and clumps of grass. Either side of these are really boggy, no wonder the walk has a bog rating of 5 ! 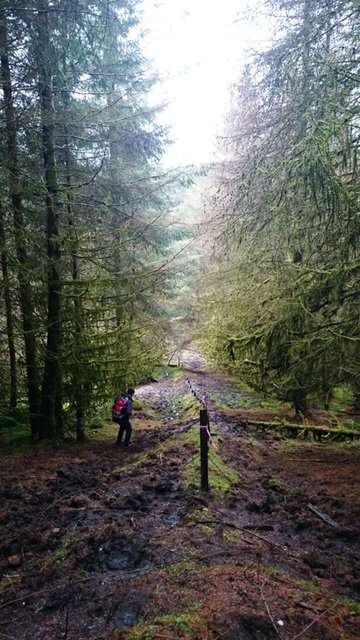 Once out of here you follow an old path all the way round, again with glimpses of loch lomond. You then take a left through an area were the trees have all been cut down and some new ones planted. 
This leads you down through more open countryside with a view down to Balloch and the end of this section.

So nothing spectacular but i think a great wee walk and it`s whetted my appetite for some more long distance walks in the future. So hopefully they can sort out the forest path , and i wish it luck for the future. 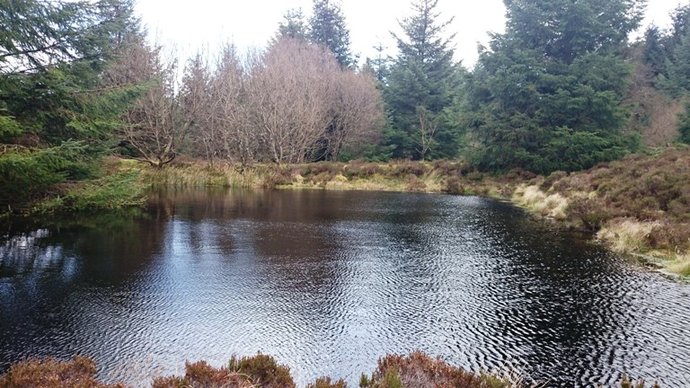 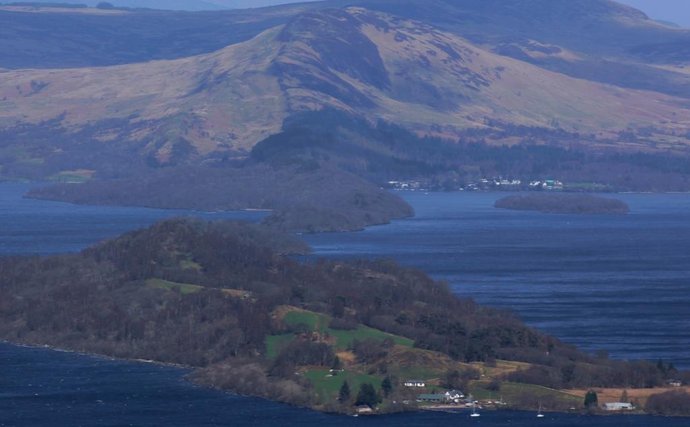 looking across to conic hill and balmaha from ben bowie summit