A plan was hatched to raid the borders to knock off the 7 Corbetts in a wunner, to save on petrol.
We'd been watching the weather for months as Low after low dashed it'self on the Galloway hills. As high pressure built from the Azores, it looked like a a few good joined up days could be in store..........
Derek agreed to look after me on this trip, so was delivered to Westhill by Rosemary his wife. We headed off to our basecamp just outside Dumfries. The pond in the campsite at Burnsoul was occupied by a pair of canada geese, which noisily rendesvous'd with another couple of pairs every morning, to feed on the grassy hill behind our tent. Bonny and big birds ! 
our_route.gpx Open full screen  NB: Walkhighlands is not responsible for the accuracy of gpx files in users posts
Next day, we headed for Broad Law and pushed our bikes to the claggy top, being surprised by the VOR beacon just before the summit trig point. It appeared out of the clag like a flying saucer ! The descent was pretty wild on our bikes, with the vibration unscrewing the battery connection on my bike -
Yee-hah !

The bikes were duly racked and we headed for our next objectives - White Coomb & Hart Fell.
The bikes were dropped off below Hart Fell at the end of Black Hope glen and padlocked to the fence by a cottage.
At the NTS visitor centre below the Grey Mares Tail, we had a quick chat to the nice people manning the portacabin and headed off up the path, stopping for the obligatory photos of the waterfall. Derek by the Mares tail waterfall

The ascent up White Coomb was uneventful, apart from getting a soggy right foot crossing the Tail Burn from Loch Skeen, when the slippy looking rocks I chosen as stepping stones were exactly that ! Hart Fell looked a long way from the summit of White Coomb, but would've been ok but for the splash through the aptly named Rotten Bottom bealach. We decided to descend by Whirly Gill, so, as I was beginning to flag, hung my hillbag on a fencepost, to be collected on the way down.
At the top of Hart Fell, we were treated to some grand views as the sun started to set. 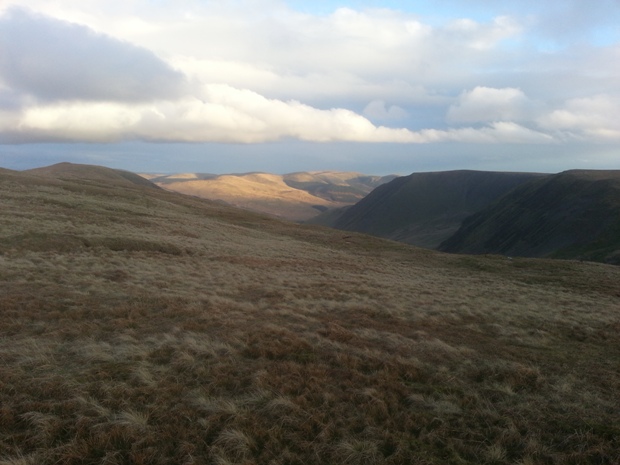 As we descended Whirly Gill, we came across a wee Goatlet, waiting for it's mum to finish grazing and come back to feed him/her. Neither seemed to be fazed as we stopped to take a few pics. The Goatlet on Whirly Gill

The initial steep descent to the corrie floor was eased by a good track that ran the length of Black Hope.
When we arrived at the bikes in the gloaming - oh woe - nae keys for the bike padlocks - left in the car !
The 7km walk back to the car in the dark seemed to go on for ever until we broke clear of the trees and we could spot the gully of the Mares Tail by the moonlight. Back down the glen to collect the bikes - now in possession of the keys - to get back to the campsite at about 11pm. A fair day for a first venture to the borders by a couple of old buddies !