2014-04-15_Hart Crag Round.gpx Open full screen  NB: Walkhighlands is not responsible for the accuracy of gpx files in users posts

Walked with John and Peter and for once, we picked a super day with sunshine all the way and a cooling breeze to help with the uphill climbing!

As you can see from the GPX file, unfortunately it suffered a malfunction (!?!) between Middle Dodd and Red Red Screes but started to work again on the descent to Scandale Pass so I have made an considered calculation of the extra height and distance and added it in to the stats.

We parked at the small parking area just off the A592 to the north of Brothers Water. Booted up and walking by 10.05am. We headed in a southerly direction alongside Brothers Water on a well maintained path towards and through the farm steading of Hartsop Hall. Signage directed across open fields which were greening up with the warmer and sunnier weather. We crossed a bridge and then began the hardest part of the walk - the ascent of Middle Dodd! 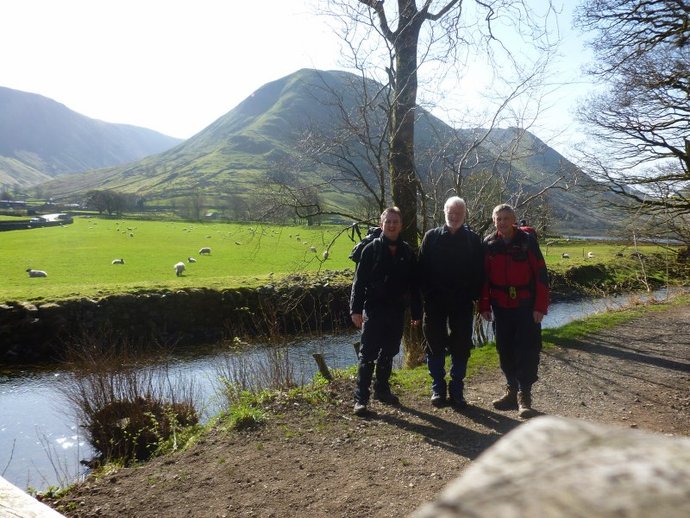 At the start, near the car park 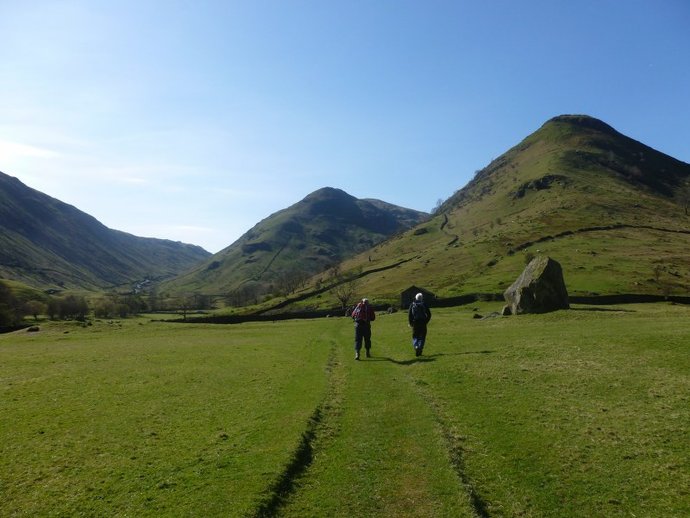 Middle Dodd is in the centre of the picture

It had been looming infront of us for the 30 minutes or so it had taken us so far and now it was a case of putting in the hard graft to get us upwards. It wasn't long before some lovely views came into sight with Brothers Water looking a picture. Caudale Moor was to our left and High Hartsop Dodd to our right with hills such as St Sunday Crag and Helvellyn also starting to show themselves. 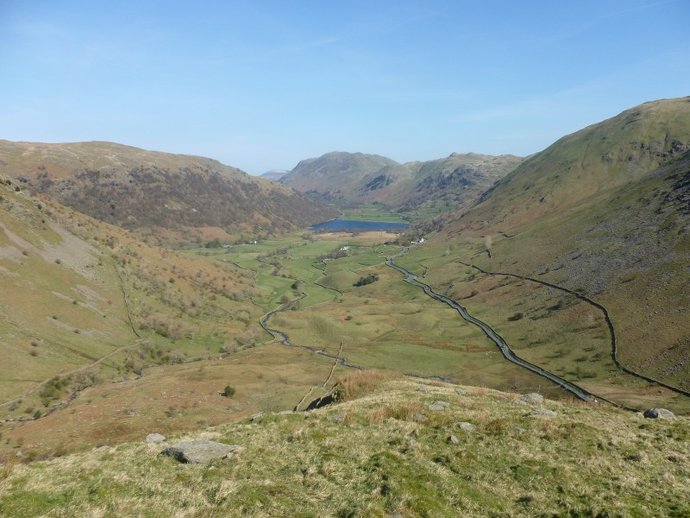 Looking back to Brothers Water It was a relief to reach the summit of Middle Dodd where I met another walker (from Harrogate) who had ascended from Kirkstone over Red Screes (our next target). As we chatted, I quickly began to cool down and had to put on a couple of extra layers and my gloves. It was good to spend time taking in the views while waiting for John and Peter. 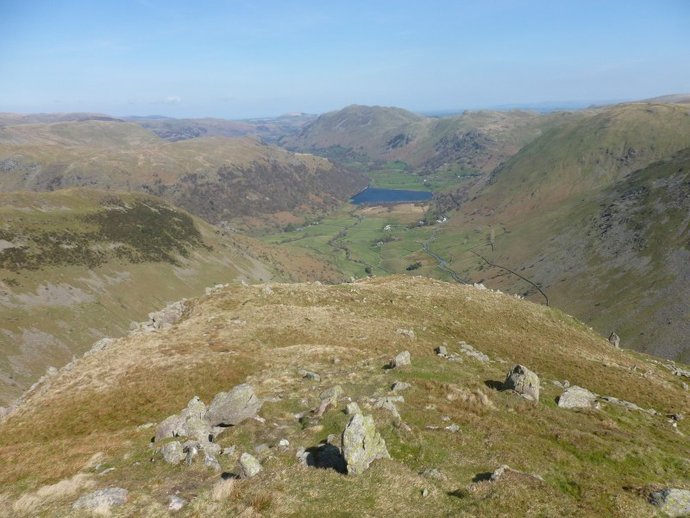 View from summit of Middle Dodd Having a rest! View east/south east beyond

The path from Middle Dodd to Red Screes is set at a much shallower incline and made for easier progress. The views from Red Screes were tremendous and it was easy to pick out favourite hills in all directions. 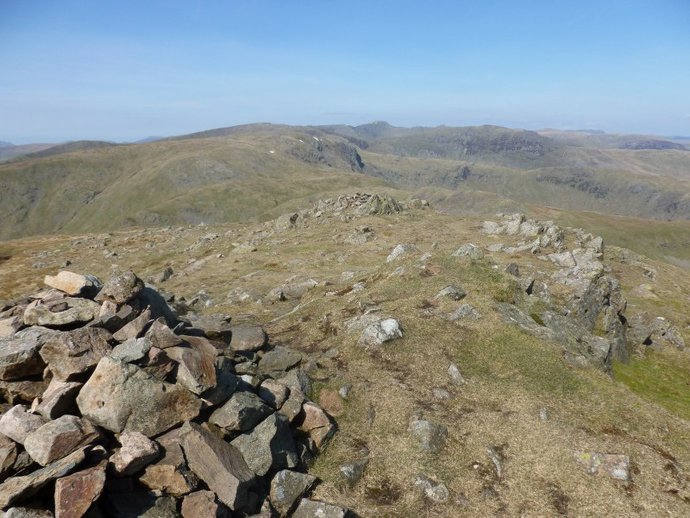 View west showing the next part of our walk. We didn't stay too long though as we still had plenty of walking to do and as the summit shelter was already occupied we decided to drop down towards Scandale Pass and have some lunch. Looking down the valley towards Windermere

Suitably refreshed, we headed towards Little Hart Crag. At this point Peter left us and went on towards Dove Crag while John and I summited LHC, dumped our sacks and headed down to High Hartsop Dodd. Another splendid vantage point overlooking Dovedale and Brothers Water. Not having sacks to carry made the climb back up alot easier! Middle Dodd - no wonder I was tired!! John and I now headed over Bakestone Moss and then upwards towards Dove Crag. On the way up we met a lady who had spoken to Peter and relayed the news that he was up ahead of us. We would eventually meet her again at the end of the walk (she said she was doing some recording for Wainwright Radio??). After the steeper section, the terrain levelled out towards a stone wall that leads to the cairn of Dove Crag where Peter was waiting for us. We had a quick sandwich and then off again to Hart Crag. From Hart Crag towards Dove Crag

It was a steep drop off Hart Crag but the dry conditions and grippy rock provided for some good scrambling. It was now a long walk along the ridge that held our last peak of the day, Hartsop obove How. It was at the summit (bump on the ridge) that we came across the colleague of the lady we met earlier as he also had radio equipment and a six foot antenna/aerial. From Hart Crag looking to Hartsop above How The last peak of the day!!

The breeze was now limited and with losing height the temperature was rising. However, the gradient was easy and we soon reached the end of the ridge and back to civilisation. A short walk on a path through the wooded area beside the A592 soo saw us back at the car at 6.25pm.

A cracking walk - good route, weather and company - what more could you ask for?

Re: Hart Crag Round

Thank you for taking me along - but, Anne says, next time can you make sure I am wearing a sun hat and sun bloc.

Re: Hart Crag Round

OldCodger wrote:Thank you for taking me along - but, Anne says, next time can you make sure I am wearing a sun hat and sun bloc.

Hello OC, you're very welcome. Next time, Mrs OC will need to come with us too!