Terrific sunny walk around beautiful Buttermere, albeit a pretty tough day after months away from anything as steep and rocky as this.

buttermere.gpx Open full screen  NB: Walkhighlands is not responsible for the accuracy of gpx files in users posts
It’s a pretty relentlessly steep mile up the nose of Fleetwith Pike from Buttermere lake, but a really good one on a twisting path and a few little scrambles through the rocks; tremendous views back to the valley behind and the High Stile ridge each of the many times you stop for a breath. Not a route if you get annoyed by false summits though – there are at least three, and they aren’t nearly as close to the real thing as you feel you’ve earnt… 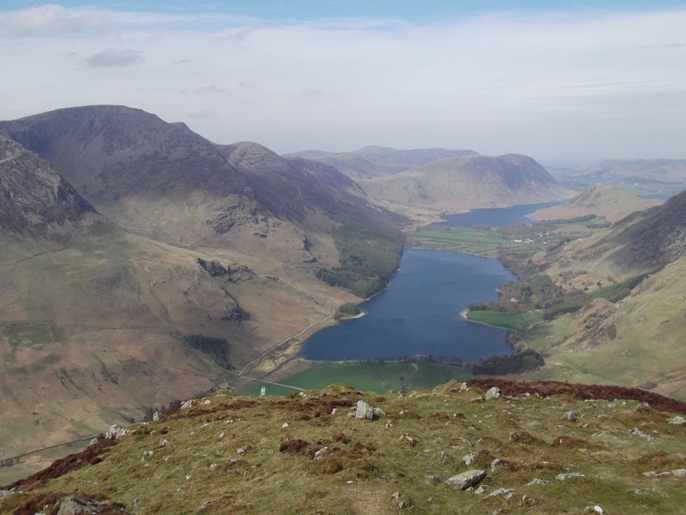 The far side of the summit is quite a contrast, a wasteland of brown heather and mine-workings stretching flatly towards Great Gable, half-paths cutting down to the highway to Haystacks. The climb there from Dubs Bottom is a lovely undulating mile’s walking among tarns and rocky crops, but then everyone already knows that! - it’s very busy here even on an April Wednesday and, I imagine, perhaps excessively so on a summer weekend. Fine views all round from the summit, but nothing is more striking than the sharp mountain triangle of High Crag rising from the ridge west, dauntingly steep and stony. Haystacks (Pillar behind) from Dubs Quarry 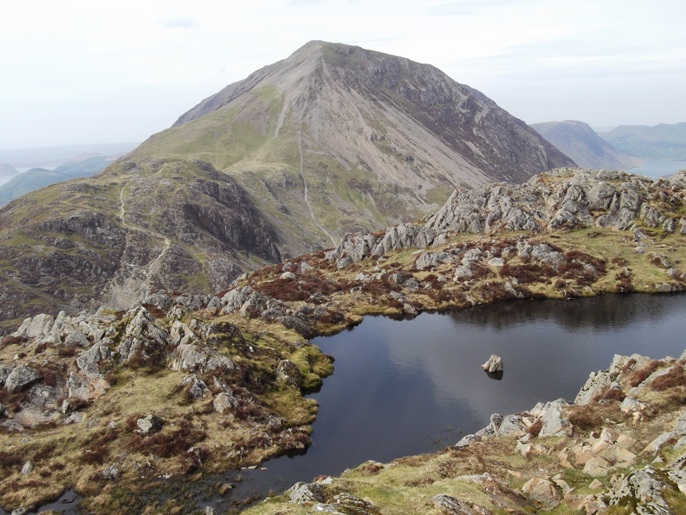 Some good work has been done on the path either side of Scarth Gap, well-graded and sympathetic stone steps laid on the climb to Seat and then much of the face of High Crag. It does degenerate into shifting scree for the final 100 yards or so, but not much more – the sight of what seems the former path alongside during the ascent shows just how nasty a climb this must once have been however. The three fells along the ridge look strikingly dramatic from Buttermere below, dizzying curved crags carved out of the north faces, and no less so close at hand, but the walk between them is actually on pretty gentle stony slopes - easy going even in a stinging salty wind. Back to High Crag 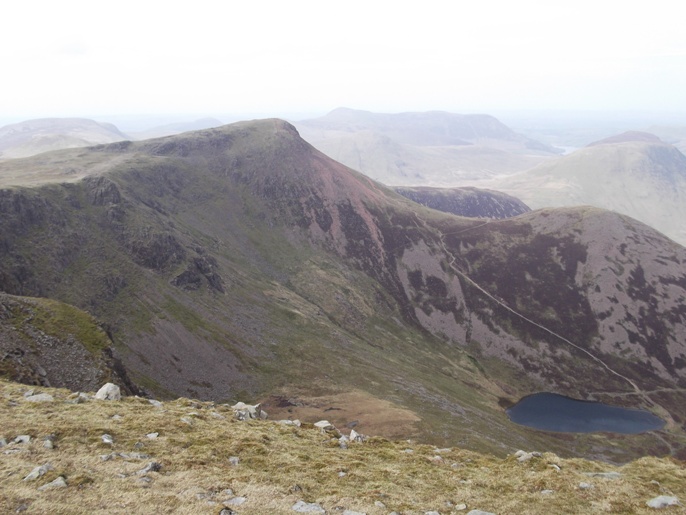 This was generally a great walk, but there’s no getting away from the fact that the initial descent from Red Pike is just horrible – unavoidable steep and loose red scree that constantly slides away beneath your feet. You can just about crab left onto manageable grass after a time, but it must be hard to do it without a fall or two first – I certainly couldn’t. It’s alright from Dodd downwards, where the path-repairers have been to work and built long zigzags of big rough stones down to the woods – still quite tiring high-concentration walking for much of the way, but life will be a lot better when they’ve turned their attention to working a miracle with the top slopes too. The shoreline path on the west tip of Buttermere is closed for now (until the end of June - nesting birds) – the diversion through the village and back to the darkening lakeside is perfectly pleasant and looks nothing on the map, but my ageing calves could have done without it! A wonderful Lakes day nonetheless. 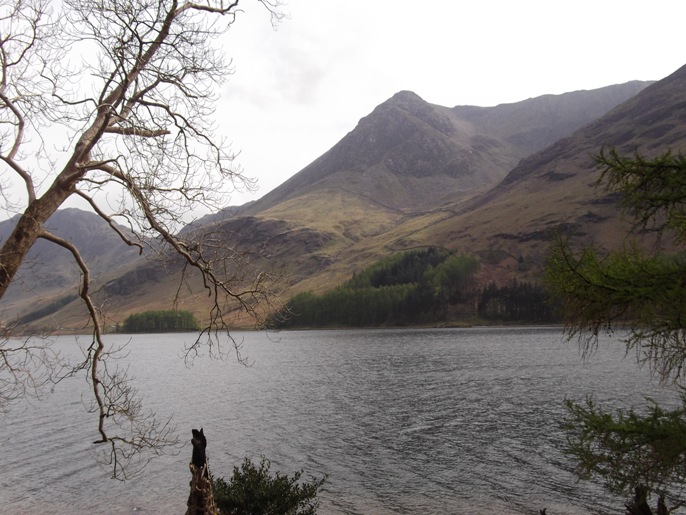 High Crag from the shoreline path

Great walk - I remember high crag as being a long slog up a gravelly path about 5 years ago. Then surfing down the top section of Red Pike at the end of the day.

Great report of one of the best walks in the country. A classic and that route up Fleetwith is tremendous.

An excellent route and it's great that you got the weather for it. Fleetwith Edge is a nice way to start a Haystacks - High Stile round. Magnificent views.

Looks a good route. I love the scenery surrounding Buttermere and found Innominate Tarn a good resting point when we were up last year.

I guess A. Wainwright agrees with that.

Where are you finding all these great weather days P, this is another fantastic hike in the very best of conditions but it's a good grunt to take on after a few months away from the 'big uns'. great effort mate, much appreciated over here as I thoroughly enjoyed the write up