Carn ask for anything Mor

Carn ask for anything Mor

Waking up to glorious blue skies over Aberdeen, it was only a matter of time before we decided to pack our bags and head up towards the Lecht for a walk. Initially we had chosen Carn Ealasaid, but changed at the last minute to the Ladder Hills, and boy are we glad we did.

We arrived at the small carpark opposite the church at 1215pm. There is only enough space for 3-4 cars, however there is another carpark further up the road which holds a dozen or so cars that you pass on your way back from this circuit, which could be used instead.

We headed up the farm track about 1230pm and immediately took our jumpers off as the temperature started to soar. It felt like summer. We stopped to look at some of the recently born lambs and got a nice view of the distillery. 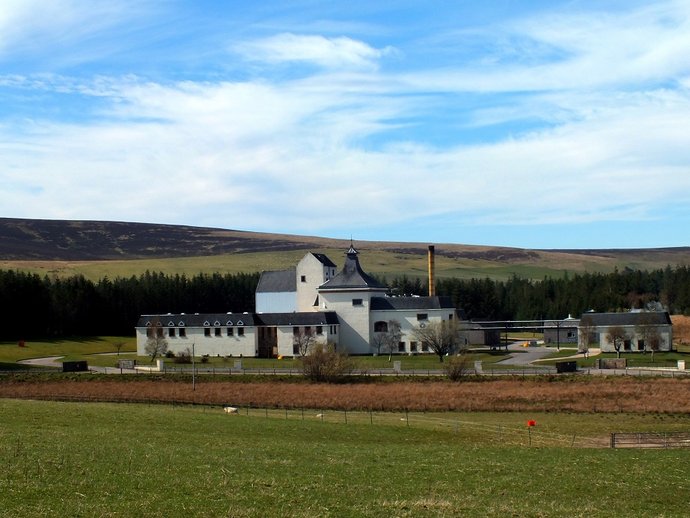 There was a nice cooling breeze blowing through the valley, helping to try and cool us down, however the sun was in attack mode today, so we were already sweating as we wandered along the 4x4 track towards the hills. The views even at this level were amazing to say the least. There were birds absolutely everywhere too, making this section an absolute delight to walk along with all the different songs we could hear. 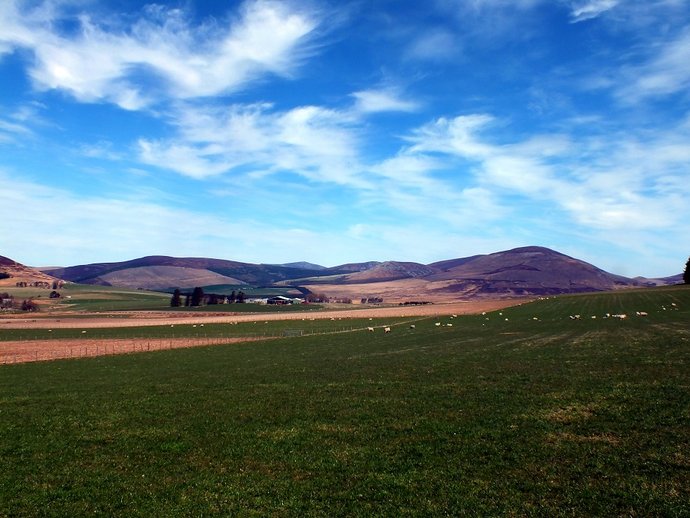 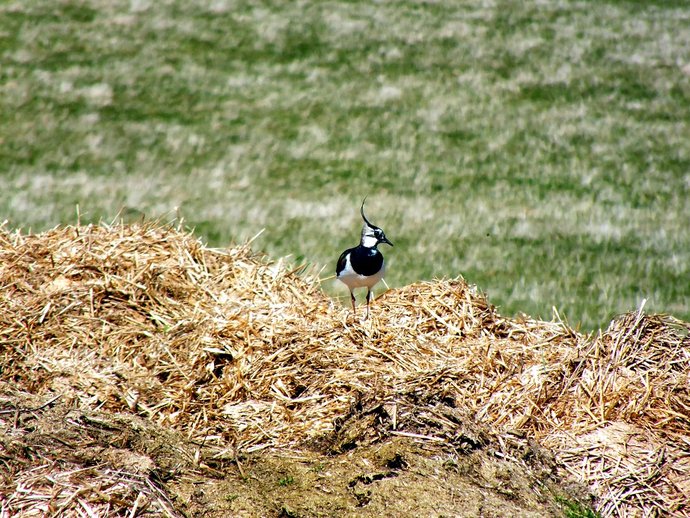 Even saw our first Lapwing!! 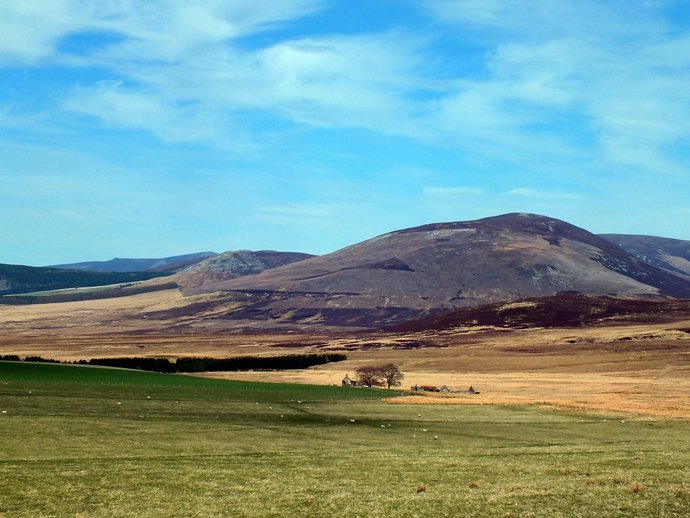 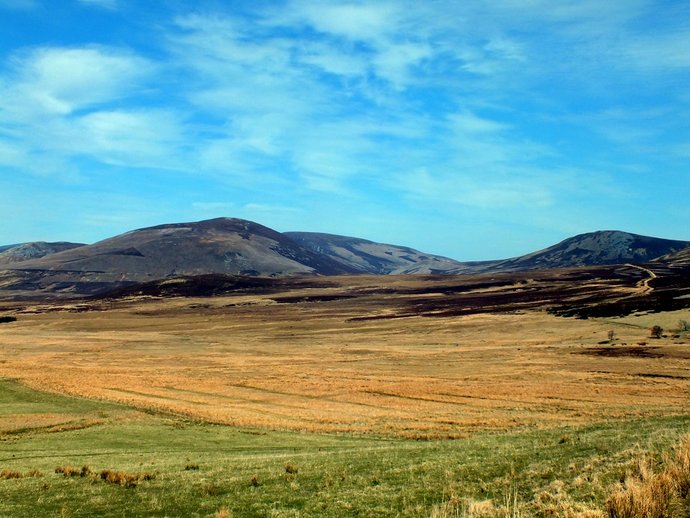 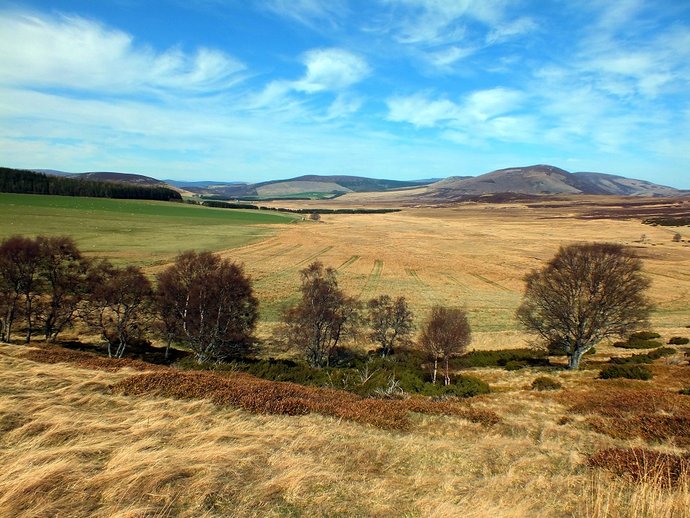 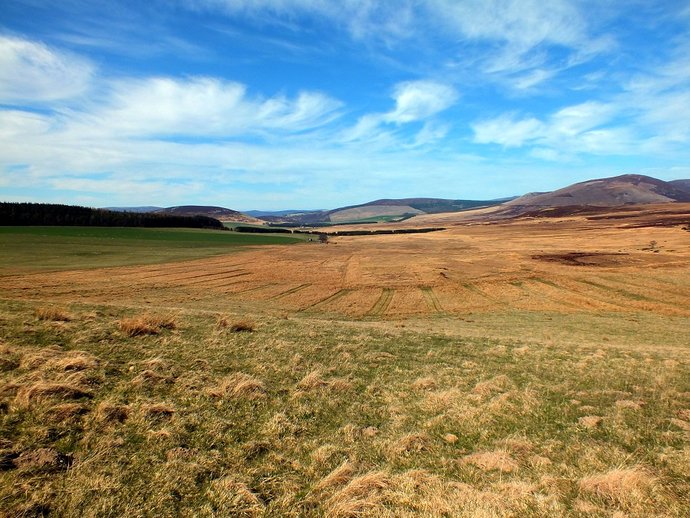 We turned off just before reaching a house and entered the Glenlivet Estate. The wind had died down slighty and the sun turned up its heat for this small section as we got our first look at the Ladder Hills. We could just make out the path heading up to the ridge. We reached another house and followed the path to Strathdon up the hill. 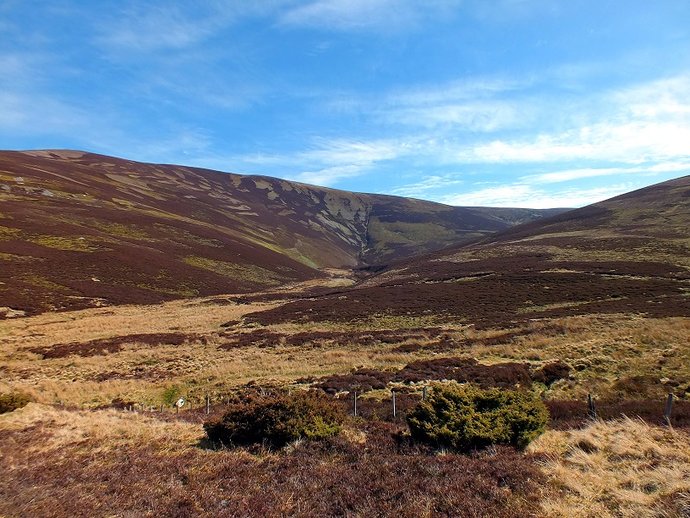 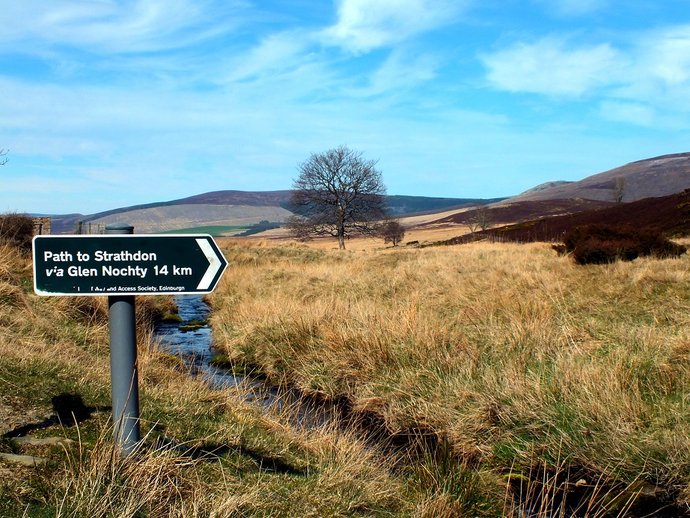 The path started to narrow and thin out as we climbed in the scorching heat. The breeze became a welcome relief as we gained height very quickly. We could hear numerous calls from resident Grouse, but were yet to see one. Eventually we reached a small stream and made the easy crossing over the rocks. The wind disappeared here and the climb became a real struggle with us having to stop every few minutes to get our breath back and gulp down some water. 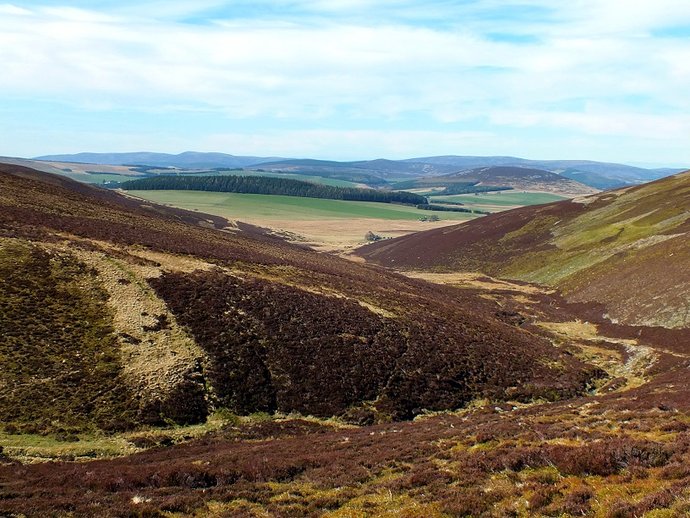 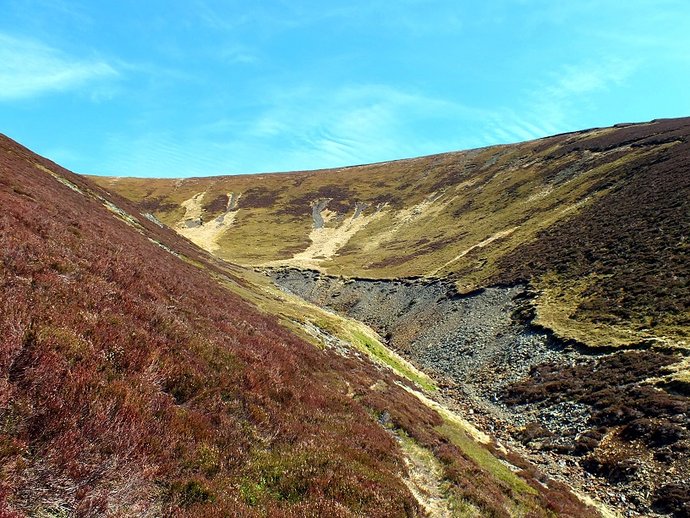 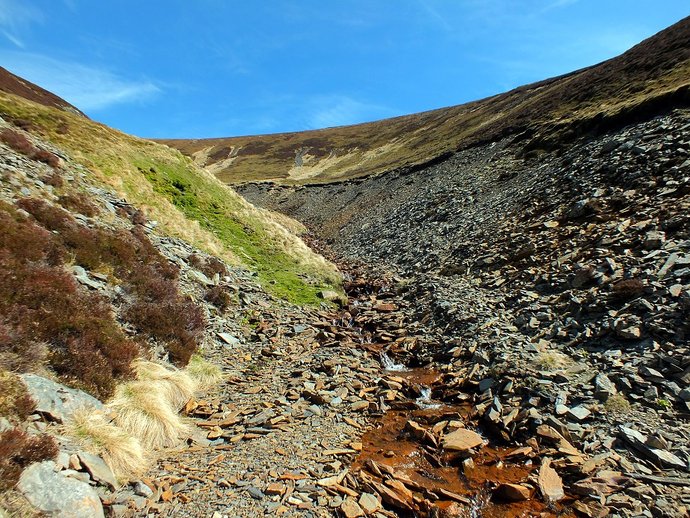 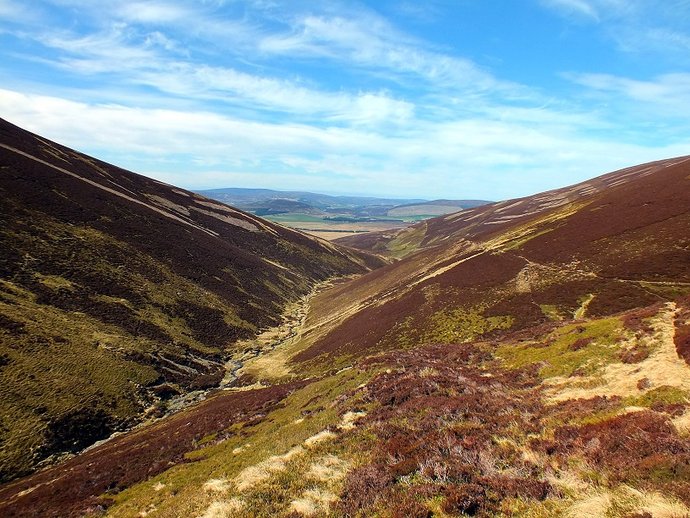 Eventually the wind returned and we just dropped to the ground and sat down admiring the stunning view back down the hill and trying to cool down. By sitting down, the Grouse decided that we werent a threat and they started to make an appearance. 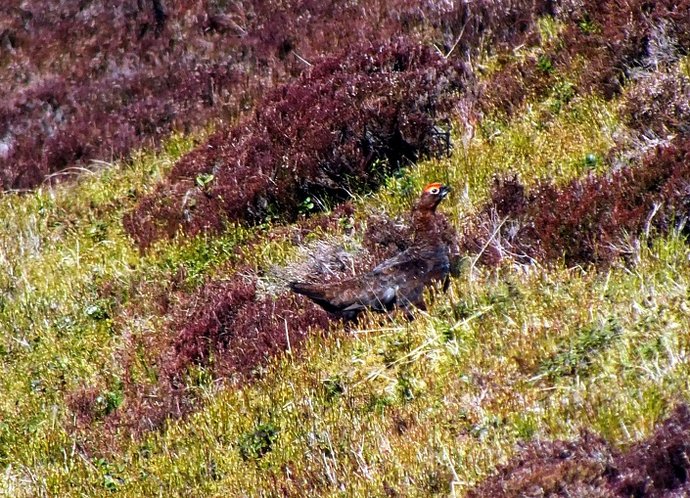 Eventually we decided that as we are only a few minutes away from the summit, we would push on with the remaining climb as we knew the breeze up there would cool us down in seconds. With an almighty push, we came up through "the ladder" and reached a small cairn where we immediately took our backpacks off and enjoyed a bite to eat. The breeze cooling us down in seconds. 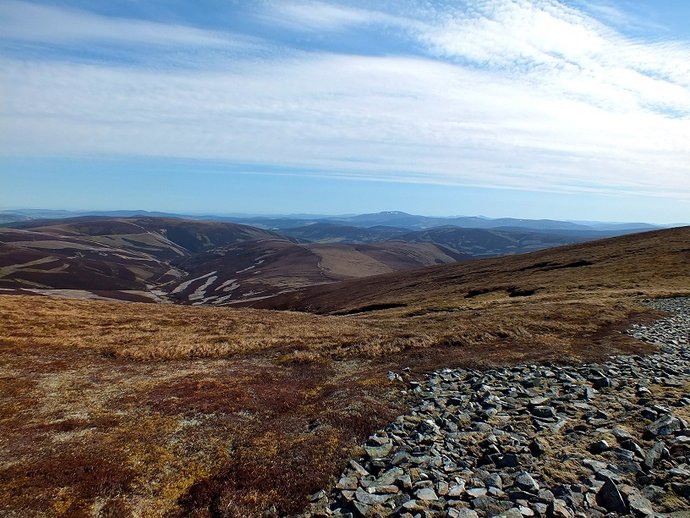 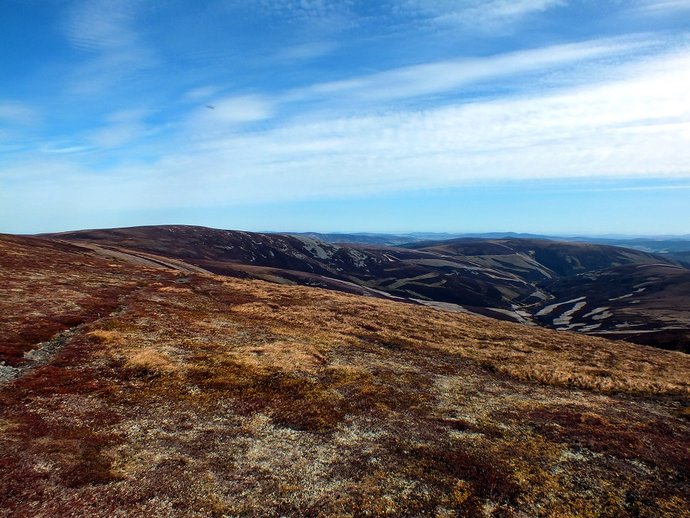 After lunch, we headed east for a short distance as there was a much larger cairn with a wind shelter. As we approached it, we spotted an angel in the sky, well a cloud shaped like an angel. 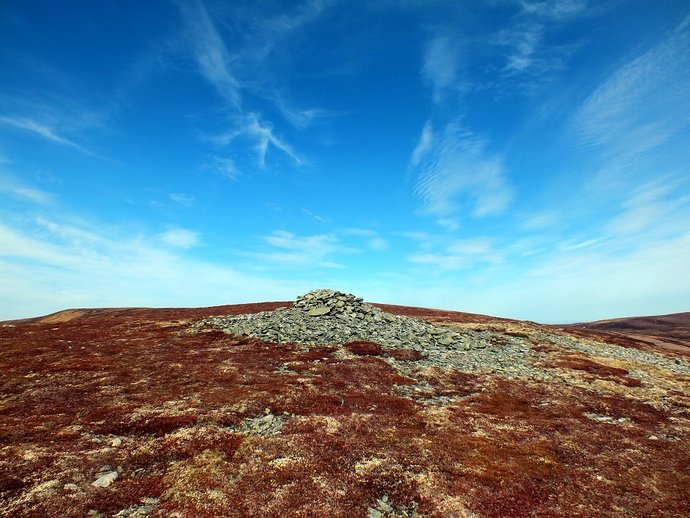 The views from this ridge were beyond spectacular. Views in every direction. Heading west again, we spotted the trig point of Carn Mor and basically walked in a straightish line to it, via some peat hags and some snow. 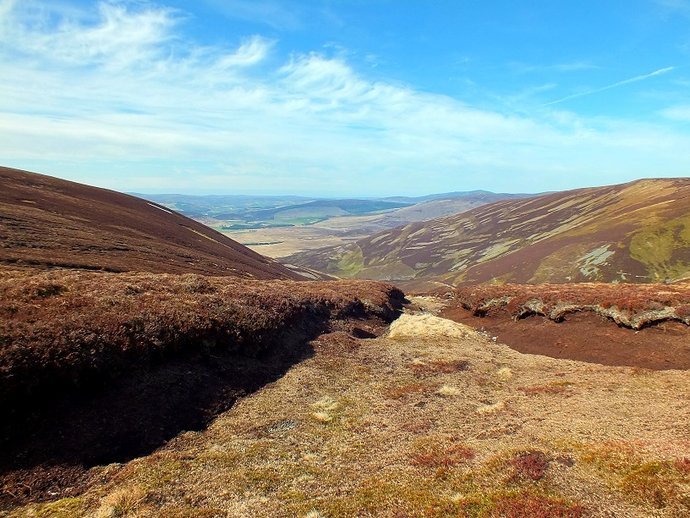 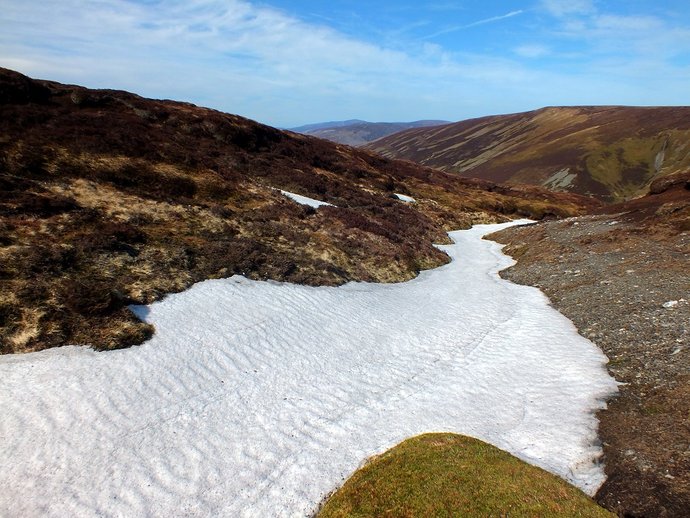 Eventually we reached the trig point and boy, what a location!! Ben Rinnes to the north, Ben Avon to the west, Lochnagar to the south and Bennachie and the Tap o' Noth to the east. 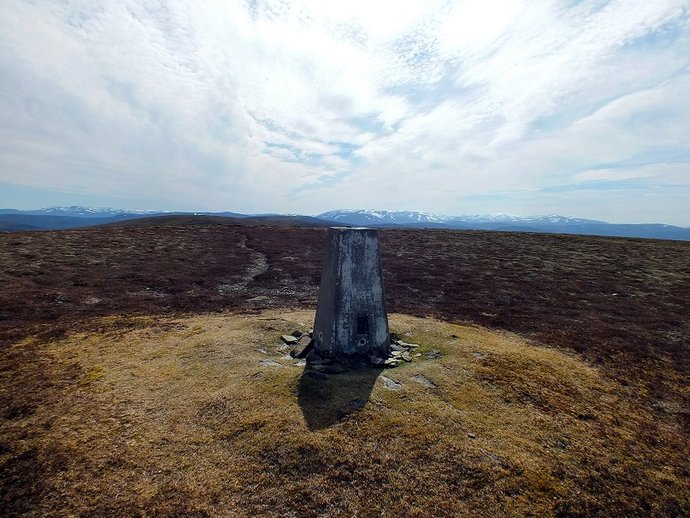 Clouds were starting to move in from the south as we had a second lunch at the summit. Jumpers quickly came back on as the sun went behind the clouds and the temperature dropped. We set off along a faint path towards a fence we could see in the distance to begin our descent, climbing in and out of peat hags and scaring numerous Mountain Hare, many still in their white coats. 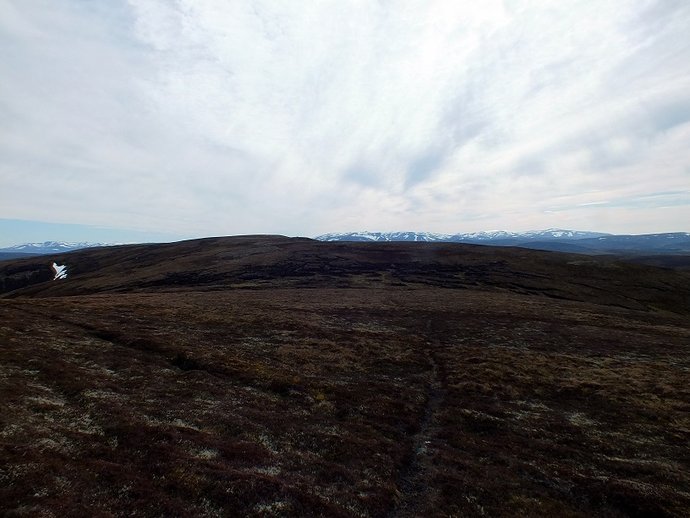 We stopped and could see the trees where we started from in the distance and worked out our path back down. We decided to head along the next hill in a straight line and walk down it towards the trees closest to the hill on the right in the next photo. 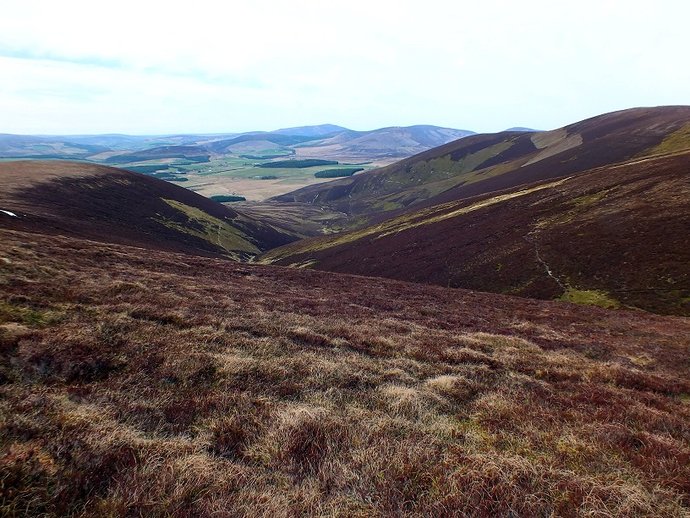 Following a broken fence, the hill gradually started sloping down as we kept the trees in sight. We eventually decided to head down the hill with the trees on our left the whole time, before heather bashing in a straight line to the left hand side of the trees where there is a gate. 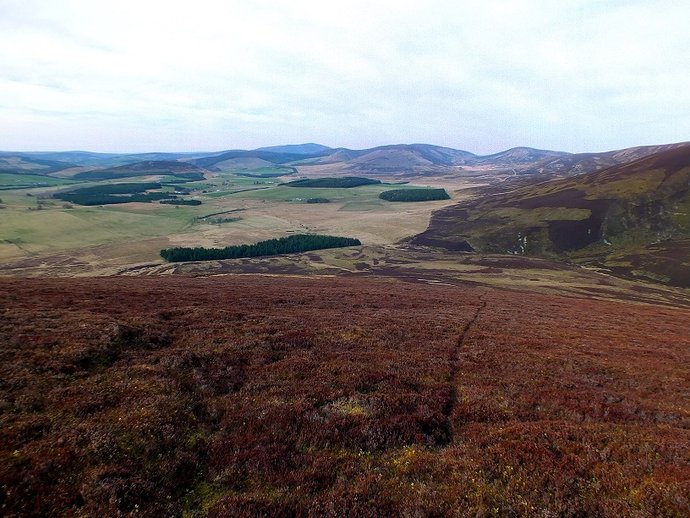 As we crossed a stile and headed alongside the plantation, we startled a deer who didn't know whether to run or stay. Eventually it ran into the trees, but not before Rick got a quick photo of it. 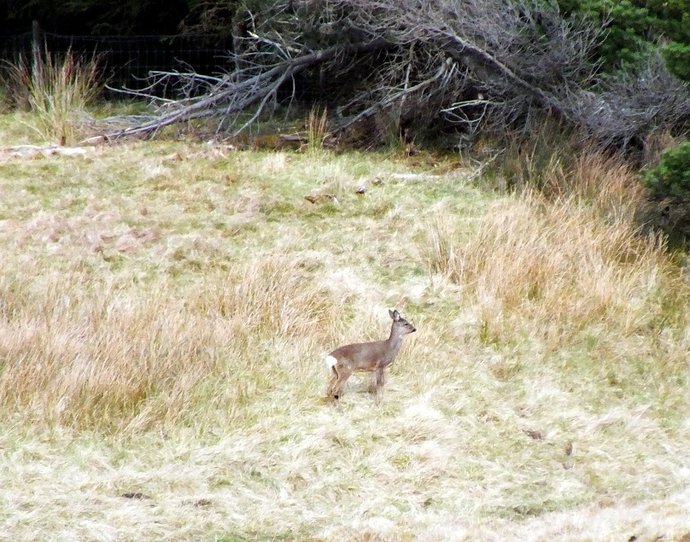 The path down here was a breeze to walk along as the sun made another appearance and it started to warm up again. We headed towards the ruins at the College of Scalan. This was a wildlife paradise as we were being entertained by everything from Oystercatchers to Lambs. 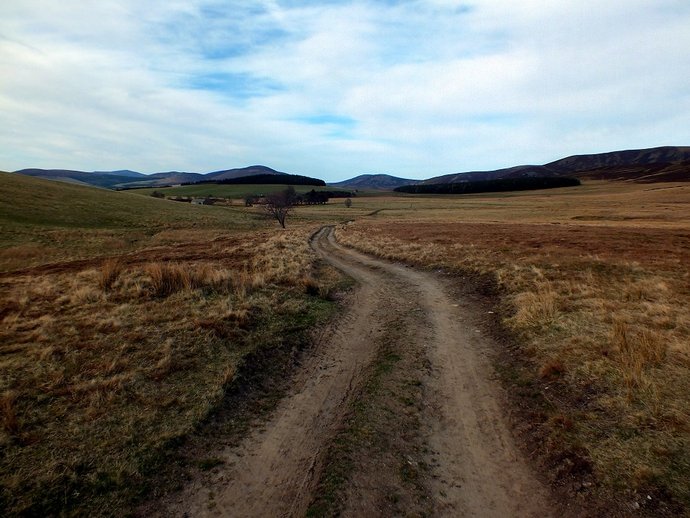 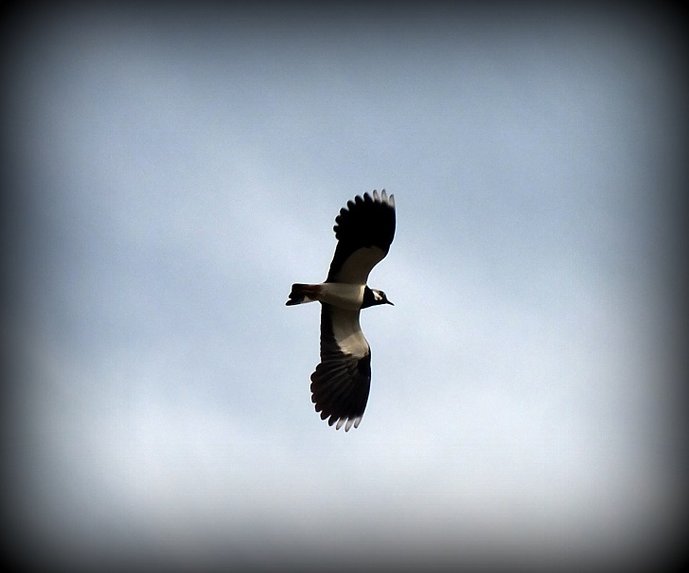 Is this also a Lapwing?

Passing the College of Scalan, we headed back towards the car via a rough road. It was here that we saw the second car park. A short while later we strolled past a Highland Springs factory and were back at the distillery before we knew it. Shame they aren't open to the public. We turned back up the farm driveway and reached the car park where we unpacked and started the lovely drive back to Aberdeen. What an amazing day and what an amazing walk. 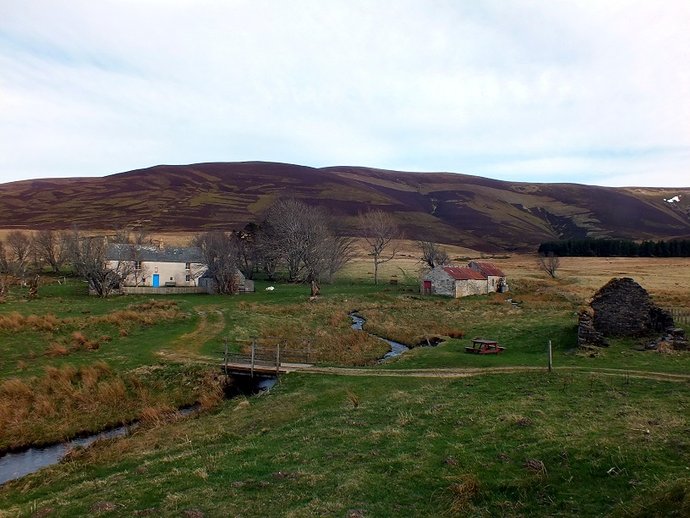 That looked a good wander on a nice day, Ric
Some great wildlife shots - even better when there's a distillery involved

rockhopper wrote:That looked a good wander on a nice day, Ric
Some great wildlife shots - even better when there's a distillery involved

Would be better if it was open to the public though. Really enjoyed this one.

I always fancied taking a picnic basket up the ladder

The summit looks like a perfect spot for a lazy summer day...
Good hill for an easy winter outing. Shame the distillery doesn't offer free sampling

A wonderful and colourful selection of photos. Lovely landscape too.

The summit looks like a perfect spot for a lazy summer day...
Good hill for an easy winter outing. Shame the distillery doesn't offer free sampling

A perfect place for a picnic indeed. The views are to die for.

Thanks Sarah. I'l take credit for the landscape too...

Thanks for this great photos - looks very tempting, particularly as we spend a fair bit of time in this area visiting family