Fersit i was on Good Friday again?

Fersit i was on Good Friday again?

our_route.gpx Open full screen  NB: Walkhighlands is not responsible for the accuracy of gpx files in users posts
Drove over to Fort William, on Thursday after work with Laura and the dogs to stay at her sisters on Conaglen Estate. After much debating on hills to walk i opted for Stob Coire Sgriodain and Chno Dearg as they looked like the best in terms of lack of Snow covering on the way over, i also want the dogs to get more practice on the hills before introducing them to full on ridge walks with cornices etc. Waiting on the Corran Ferry, looks like it'll be a lovely day

Woke at 7 and got the 8.30 ferry at Corran and drove up to Fersit to the turning circle and parked the car. There were already 2 cars there and two others appeared as i was changing. Walked down the path signed for Corrour Station and passed a few houses and corssed the bridge then over the Railway line. Headed uphill towards the Farm passed an outhouse where the Farm Collie's stayed, they were barking and furious that outsiders were walking through 'their land'

My two ignored them and continued to pull me through the Farm and up to where the Metal Barns come into view. I saw the Farmer in the field to the right next to a wee hut so decided to cut up into the hill so as not to come into contact with him, read a few reports about him not being very receptive towards hill walkers. Dogs still on leads at this point. I had to squeeze through a gate as it was tied shut which was a nightmare with two eager Spaniels pulling me as they were needing to get going up the hill!! Must have looked ridiculous to the farmer but i consider it a win for me as he had the gate tied to stop people getting through but i sueezed in, hehe. I decided not to start the climb right away and instead followed the stream a bit more up and then cut over when i saw it was a bit easier to get up onto Sron na Garbh-Bheinne. I found this climb up quite tiring due to the heat, but the thought of the views at the summit pushed me onwards, plus the dogs rush on ahead so it makes me go slightly quicker than i might otherwise go. Climbing up onto Sron na Garbh-Bheinne

Reached the ridge and got a peak of the stunning views that were to come. I followed the ridge and saw the Summit and noticed a couple of guys there already and their Collie, got up top sweating and knackered and the views were stunning I got talking to the two guys at the summit and it was a father and son combo, the son was only 13 years of age and he's done 80 odd Munros already, well done Mountainboy12

They took off at a steady pace and i stayed on the summit for another five minutes to take in the scenery myself which was superb. I then set off South and followed the ridge round to the East towards Chno Dearg. I met the father and son again on the way round but i was out of puff so they carried on to the summit and i took a breather and then met them up at the summit again. If i thought the views on Stob Coire Sgriodain were good then the top of Chno Dearg blew my mind, that extra 67 meters must have made a fair difference as we could now see the 'Ben' and all the way to Schiehallion! This is why you put yourself through the pain of getting to these summits!! Ben Nevis in the distance (Middle) Schiehallion in the distance (zoomed in) Looking back up towards Chno Dearg, lovely day for it

Headed towards the farm road and joined it further East than i set off from it. Retraced my route back to the car park with a stop in the river beside Fersit to dook the dogs in as they were sodden with mud as route was quite boggy with snow melt. Glad to be back at the car as was still harbouring plans of getting back to Conaglen to pick up Laura to then head to our accomodation in Aviemore and drop the stuff off and head to Inverness to see the Dons but a mishap on the estate involving Laura and a barb wire fence meant we spent 3 hours in Fort William A&E with a deep cut to her leg, ah well we can't get everything, lifes Chno Joke you know 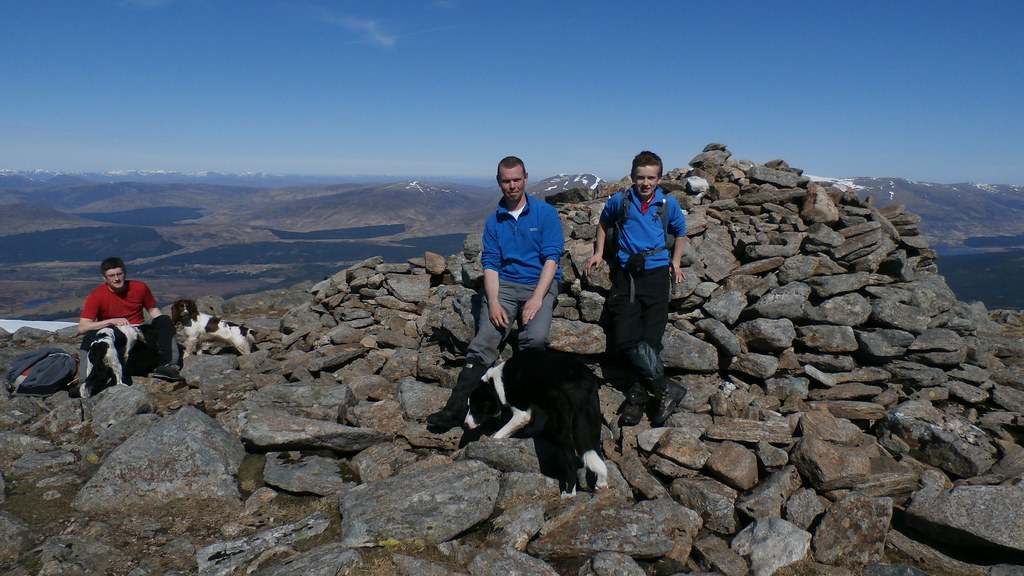 A Big Well Done to Beaner001

Great looking spaniels there, the hills look something too

Huff_n_Puff wrote:Great looking spaniels there, the hills look something too

They have their moments huff n puff

Cheers mountainboy12 I never got any of us all as the memory on my camera was full, schoolboy error

Two happy dogs! Lovely to see them having fun!

I'm doing these in June and hope the bogs will have dried up from the snow melt by then.

Silverhill wrote:Two happy dogs! Lovely to see them having fun!

I'm doing these in June and hope the bogs will have dried up from the snow melt by then.

Thanks Silverhill, yeah they love to roam! I think you will be fine by June, the only places where snow was still lying was the walk between the two and on the north face of Chno Dearg

Wow you had a great day for the two of them! Wonderful photos and I did not realize they could be climbed so quickly. Thanks for posting

Mountainlove wrote:Wow you had a great day for the two of them! Wonderful photos and I did not realize they could be climbed so quickly. Thanks for posting

Hi Mountainlove, yeah i dare say it could be done slightly quicker as i spent a bit more time on the summits admiring the views than i might otherwise do, good luck in your trip

Great to see these two hills at their best.We were up them in January and visibility was down to 1 metre at the summit of Chno Dearg

On the plus side,we slid a fair way down on our backsides in the snow

tina bonar wrote:Great to see these two hills at their best.We were up them in January and visibility was down to 1 metre at the summit of Chno Dearg

On the plus side,we slid a fair way down on our backsides in the snow

Aww what fun sliding down Tina bonar, I slide down a fair bit of Meall Ghaordaidh two years ago, so quick