Beinn a Beithir has been on the radar since my AE trip last August, too claggy,,, then was going to try in November at the Kinlochleven meet, too snowy (although others did venture up). So my choice for the Easter weekend was to get these two in, John suggesting Cruach Ardrain for the following day.

Camping at the Red Squirrel on Friday evening was manic. The place was heaving, bikers, dogs, kids HUGE tents, little tents and hardly enough room to swing a guy line.

I left home shortly after 4, reaching the campsite around 6:30pm with John still over an hour away I found a suitably flat and roomy site for the new Aura 3 man tents debut. Very conscious of putting this up,,unaided and under the watchful eyes of those around me. Took my time, got the main body up with the 3 poled sections but struggled getting the pins in the steel tubing. Pottered around for a while then thankfully John arrived. Some parts of this are defo better with 2 pairs of hands.

Tent up and dinner on by half 8 (ish) Made up the lunches for tomorrow, a few drinks in the spacious porch on our comfy chairs then off to bed. One word - BALTIC!

So, after very little sleep on my part (John had 2 sleeping bags!) We were up and away bright and early, arriving at Ballachulish Co-Op car park for an 8am start. 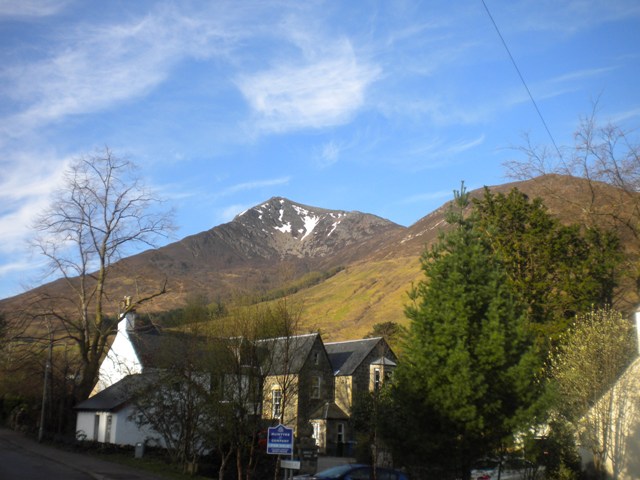 View to the ridge 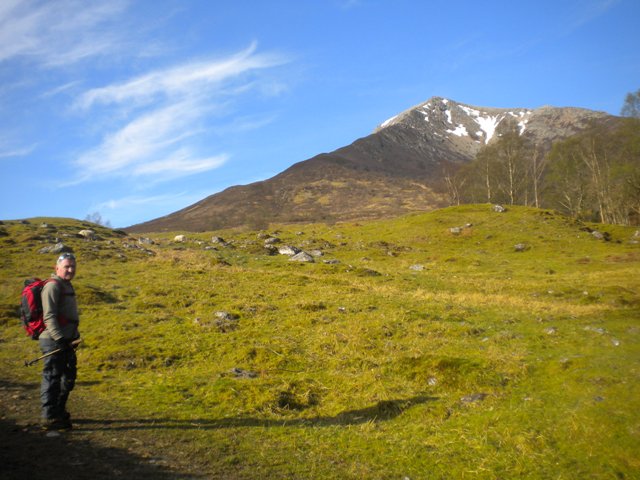 John with the Eastern ridge

John had previously attempted Beinn a'Beithir via the ridge on the Eastern side, further round than the standard Beinn Bhan route. 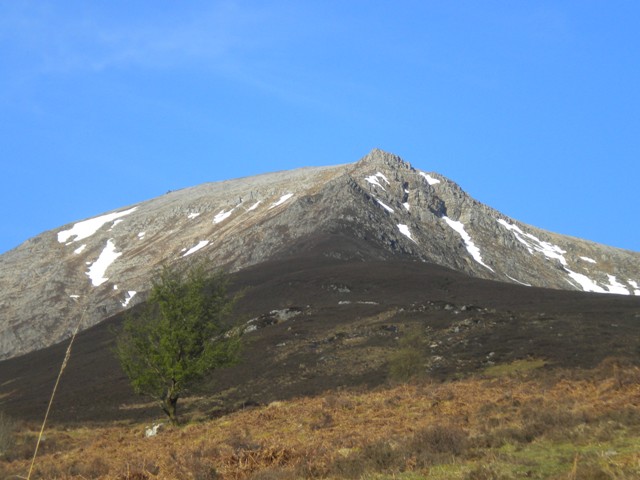 The ridge looking a little less daunting from higher up the track. 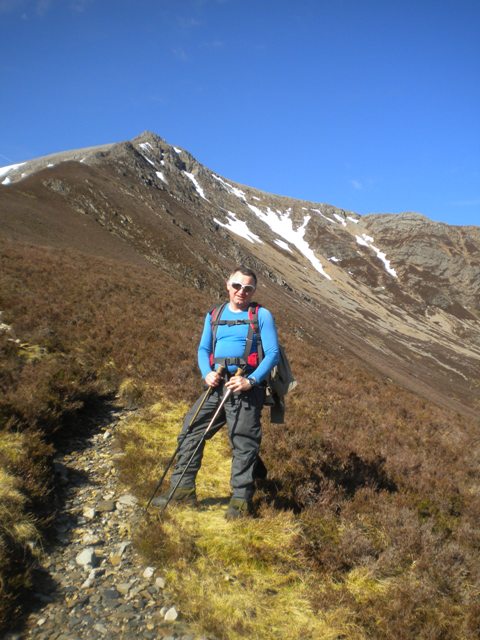 Shaping up to a lovely day

This way was even steeper and once above the tree line, we had several stretches of rocky scrambling, nothing hard but one or two bits had a fair bit of exposure to the right, over Coire Riabhach. Johns last outing up here was in snow where a bypass path was used but proved to be too tricky under snow with very loose and steep ground beneath. 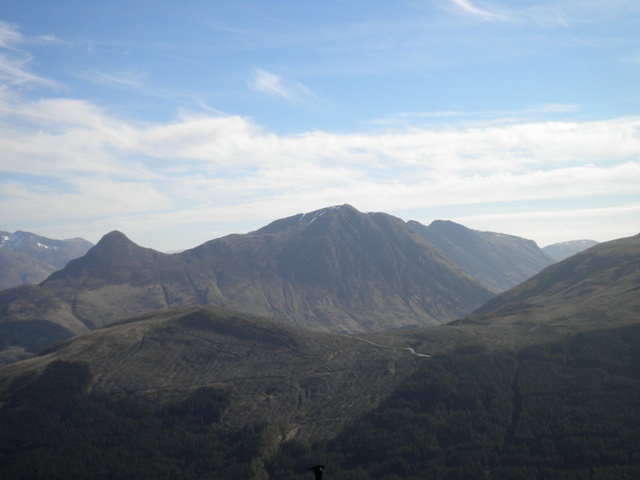 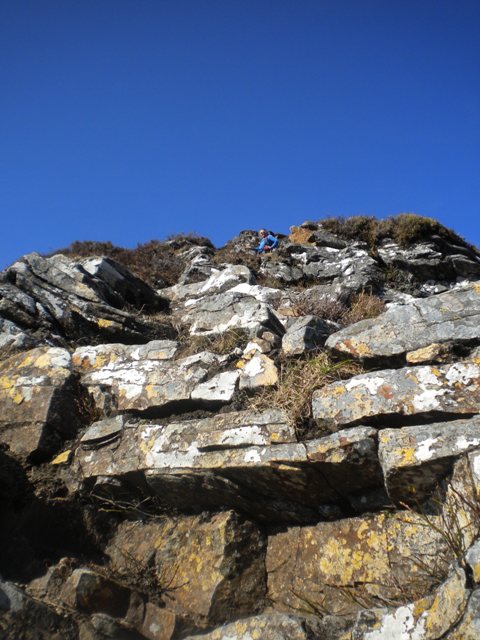 Getting to grips with the rocky ridge,,Johns in there somewhere

Our choice of footwear today was winter boots, anticipating more snow. This was a BAD decision, hardly any snow on the paths, what there was, was short, soft and of no consequence. The boots then, just proved to be heavy, inflexible and a pain in the balls (of my feet) to be honest. By the time we were up the rocky ridge and on to the top of Sgorr Bhan I was in some discomfort with a long way still ahead. I'm not normally the fastest up dem der hills but this slows you down even more. Still this was a fabulous sunny, warm, clear day and the views alone were a welcome distraction. 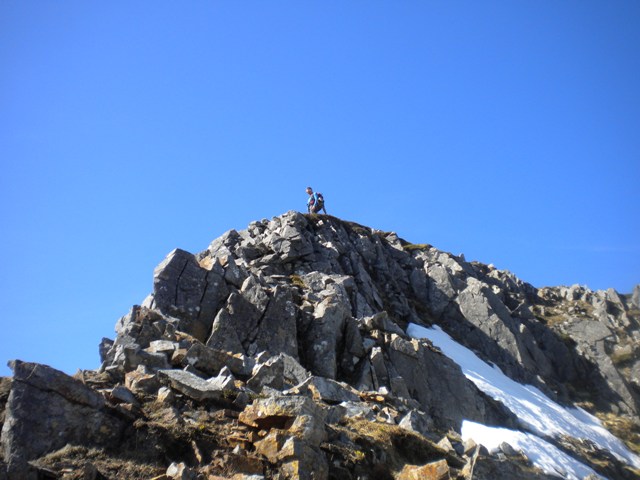 What a wonderful blue sky 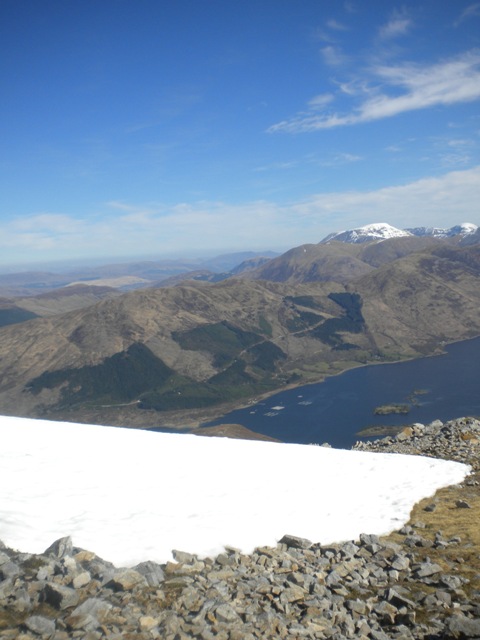 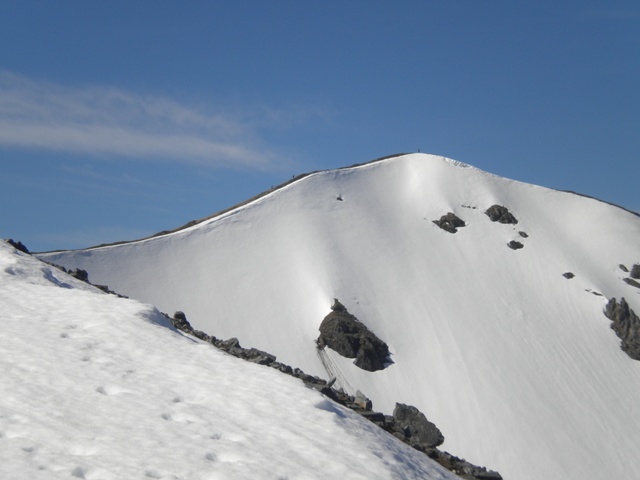 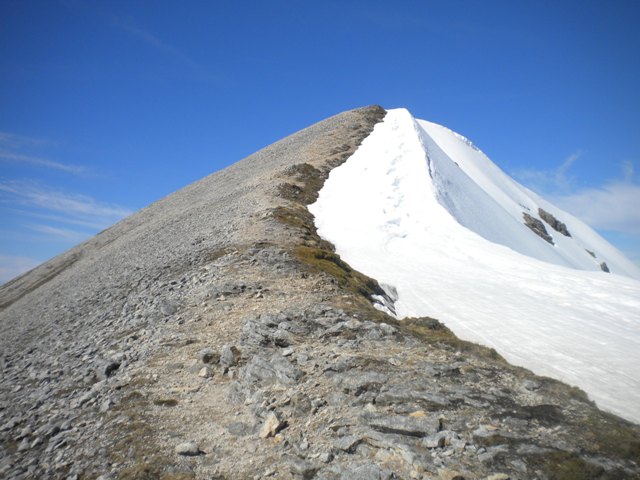 Up the edge to the top

Reaching the top of Sgorr Dhearg at 1024mtrs was amazing, very short stretch from what looked a much longer way from Bhan. The trig here was quite busy so we had some food first and let the other team move off before getting our pics taken. 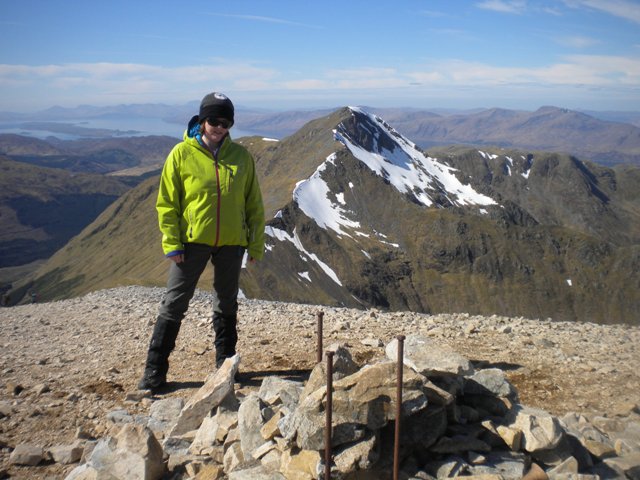 Munro #68 and some sore feet 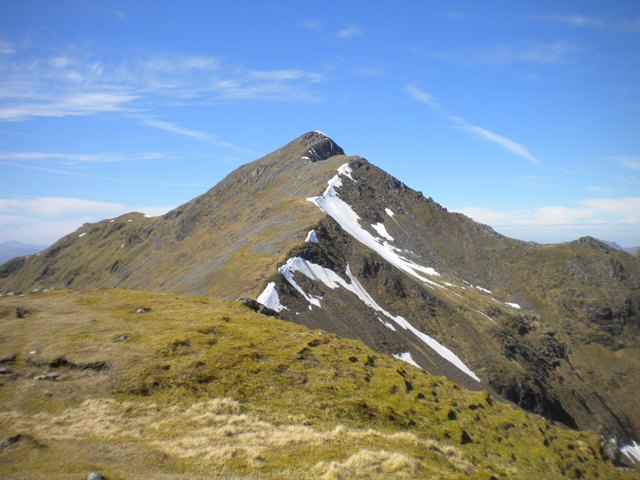 Over to Sgorr Dhonuill

I had harboured plans of letting John do the other one on his own while I headed off with the burny feet. But with a bit of consideration, I changed into thinner socks and what a difference it made. Gave me enough oomph to push on down into the corry before the trudge up to Sgorr Dhonuill. 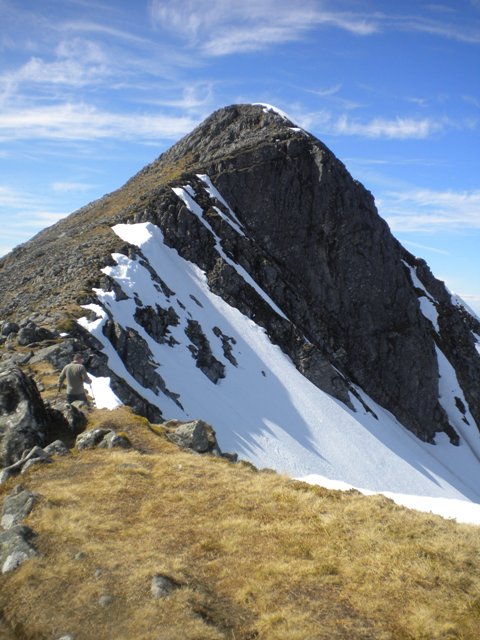 Another ridge up to the last hill 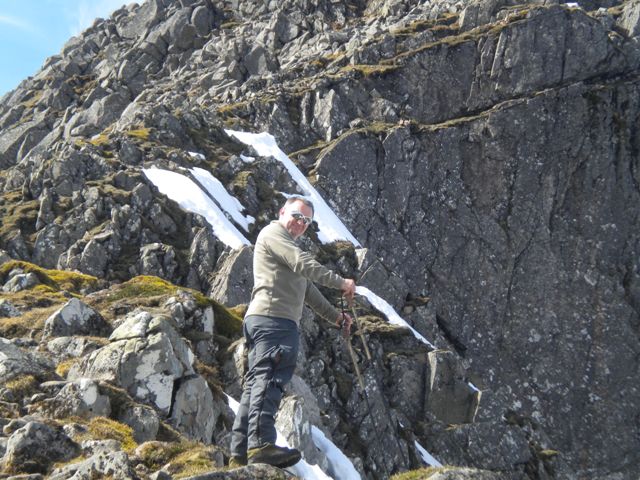 John checking out the drop

The hills were very busy. Only saw a couple of people coming up the same ridge us, but by now, there were several large groups all over the tops, probably most have come up by the trade route through the trees.

With the second Munro Sgorr Dhonuill just ahead, we stashed out packs, taking only poles, cameras and water. Up another wee rocky scramble, not as much as earlier in the day, and we were there. Amazing, Munro #69 for me, about #195 for John. These two were harder than I'd anticipated and the boot situation really got in the way so we had been out for a lot longer than we thought we would be. 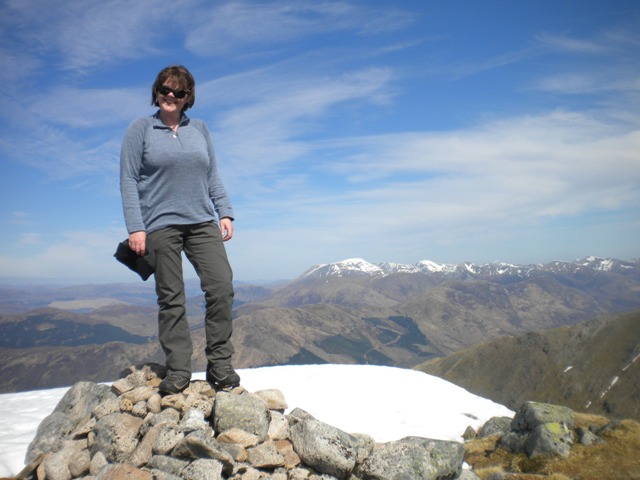 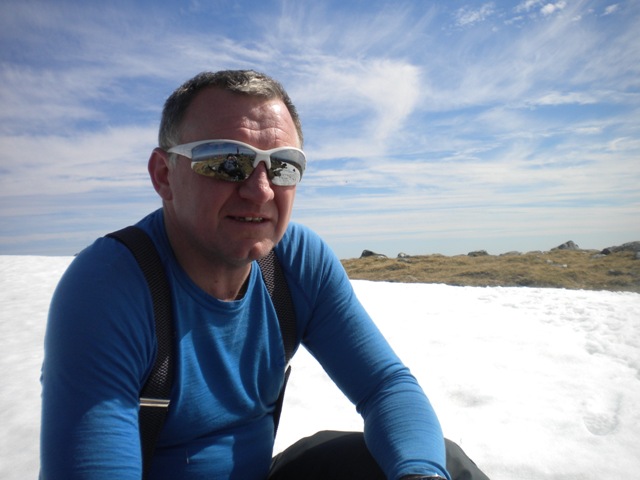 John chillin' in the spring sunshine

After cooling my feet with some snow, boots back on, one more pic taken, sorted. Looking out to the isles

Heading back off the top, a few girls were covering the scrambly bit up and 2 or 3 seemed to be having vertigo issues. Helped them out a bit pointing out which boulders to use etc. then off they went, nearly at the top. On down for us, picked up our bags and dropped off down the fairly steep but short Coire Sgreamhach. Near the bottom, we were passed by 3 other climbers, all stopping at the bottom to take on some lovely cold water from the fast flowing wee burn there. Topped up our own bottles and with the sun on our backs above the ridge, we headed off. Smashing views back up to the ridge with people picked out against the skyline. Back up to the ridge from the Coire 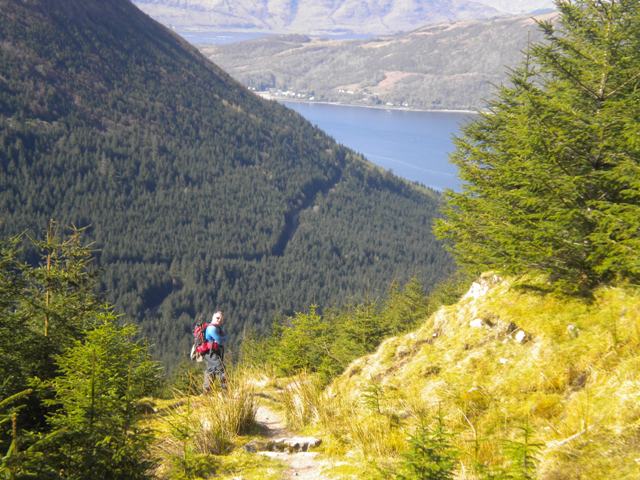 John in the lush forests heading down to Ballachulish

Heading down to the treeline, some welcome shade and reapply some sun cream. Smashing path down through the trees, in and out of shade, undulating over small rocky sections and burns etc. Eventually we joined up with the track and mainly followed the odd waymarker for Parking. This brings you down to a car park within the forest from where we followed a lower track past a farm/b&b and along the old Ballachulish Ferry railway line path, where the old station platform forms part of the lane wall. This route, we thought, brought us out at St Johns church on the main road but we actually came out further west, around the bridge, so we had a 2 mile walk back to Ballachullish, any relief I had from the fresh socks and much scrunching of feet was to be really tested here. I stopped often, squished the toes and feet then on again, worked for short bursts.

So, over 9hrs later, we reached the car, my thirst, initially for Peroni, had dwindled, heck, a bottle of milk was all I wanted now.


Few drinks in the new Glencoe Gathering hostelry, followed by a few more in the Clachaig, (MOBBED) and a chance meeting with Darren, a fellow Walk Highlander, brisk wander back along the newly laid path running the length of the Clachaig to Glencoe road. Couple more drinks and a natter before an even COLDER night in the tent. Ending up with 3 jackets, waistcoat and top, 2 pairs of trousers, 2 x socks, hat , gloves, sleeping bag and big woolly blanket, still chittering.

A long, hard but very rewarding day. Thanks so much to John for keeping me going

This is route we took


Ballachulish Map.gpx Open full screen  NB: Walkhighlands is not responsible for the accuracy of gpx files in users posts

This is route we took

Oi,,Im not Big (a whinger possibly,) but not Big lol x

Brilliant stuff Gill. Done this a few years ago but seen nothing all day and got very wet. I'll return one day in good weather for sure.

The route out, you can avoid a good part of the road back, its not obvious but when you hit oneof the forest roads take a right, its uphill slightly but then skirts around higher up in the woods above the road, but comes out just before the small church. pal of mine was in front when we did them and he missed it, we were back at the car park 40 minutes before him.

Great stuff and a good route. It's a great walk this.

Thanks all, Aye Dave,,he remembers it well,,even pointed out the precise boulder he struggled with before hitting the 'bypass path' lol

Think I scarred him for life that day, mind you I've never been the same since

nice of John to donate his spare sleeping bag!!

...jeez you seem to be having a hard time with your feet/ boot situation ....i can't tolerate the burn either ...time for trainers ...

SAVAGEALICE wrote:nice of John to donate his spare sleeping bag!!

...jeez you seem to be having a hard time with your feet/ boot situation ....i can't tolerate the burn either ...time for trainers ...

Thanks Alice,,,second sleeping bag and self inflating mat secured for this weekends camp in Mullardoch and defo be in summer boots. Be good to meet you,,Im gonna do my best to keep up with you fast guys on the long walk in. lol (be gentle with me

) See ya at the weekend.