Our first trip to Ardrain,, some 4-5 weeks ago, via Inverlochlarig and Beinn Tulaichean was cut short when in something like 100mph winds, John fell just after the BT top and ended up in Stirling hospital with a suspected broken, actual dislocated finger.

Under VERY different conditions and after a long day on Beinn a'Bheithir yesterday, we returned to tackle Ardrain from the North this time, on a glorious Easter Sunday.

Breaking camp at the Red Squirrel, we decided not to cook breakfast, so drove down to the big carpark above Loch Tulla with the burger van.

The AE ridge was as clear as a bell, no cloud and clear blue skies only making it look more dramatic. Further east, there was light cloud around some of the tops, with the Big Bookil hidiing its face under a small puff of white. As Rannoch Moor expanded around us, the hills kept this horizontal layer of cloud but on clearing Bridge of Orchy, looking down to Dothaidh, Achaladair and the gang, the clouds were draped over the tops like a blanket, looked like they'd travelled far enough and were having a rest lol

As promised, roll and a cup of tea at the van then off down to the Falloch car park. A few cars already there and we were kitted up, sun cream on and off by 11am. By now,,not a cloud to be seen in the sky.

On through the the railway underpass and over the River Falloch, the views ahead of Beinn a Chroin and An Caisteil were fabulous, still a fair bit of snow around on both. I did these two with Chabhair on a smashing warm sunny day last summer and this was the first time Id really been able to see and appreciate that route. Following the track until the end of the trees over to our left on the other side of the river, we saw 2 people heading up the hillside and on crossing the river by a very rickety bridge, we were over taken by a solo walker on a mission. 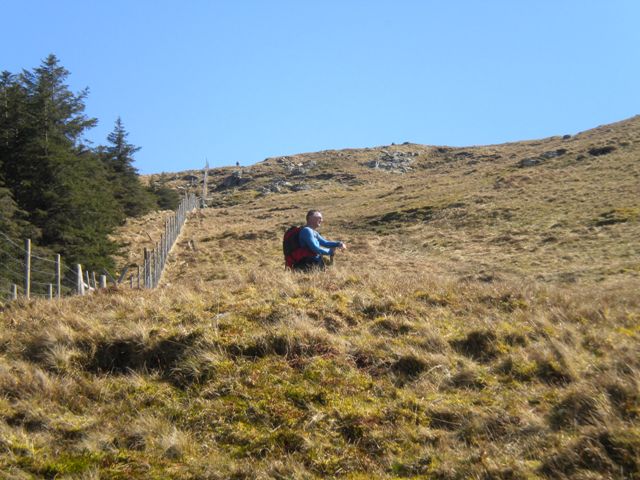 From this point, there's a bit of a path but just follow the tree line up until just under the much rockier section heading up to Grey Height. We cut this off and took a diagonal line to join the ridge some way ahead. 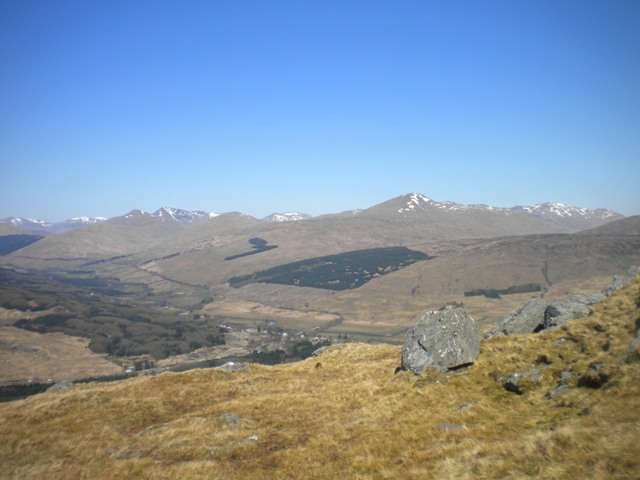 Views North with Ben Challum on the right

Carrying on, John was a little higher up and pointed below to where a path ran, following this around under Meall Dhamh I realised I'd now lost John, had be been so fast he'd disappeared out of sight already?

I wandered in a roughly up direction,,keeping any eye then saw him coming over the top behind me. He'd taken up a position on a wee rock waiting for me, while I undercut the top and came up further round lol

By some miracle,,I ended up in front for a change. 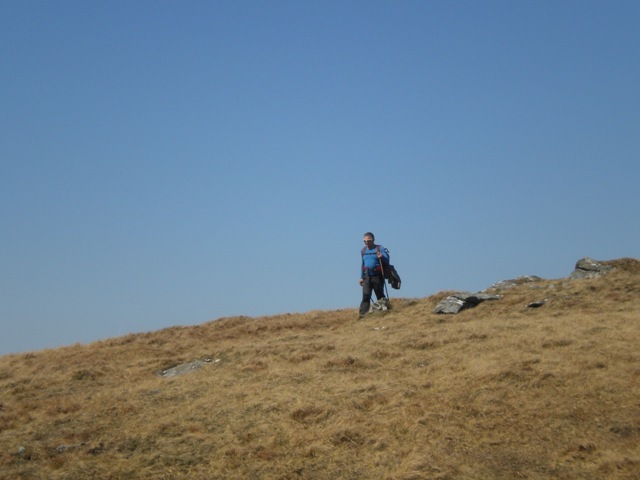 Now,,from the bottom of the treeline, you get the impression the ridge leads straight up and pretty soon we would be at the top, However, by now, we could see the hill itself, over to the left, still holding a lot of snow and with a drop down before the climb up to the top. Up to Ardrain from Grey Heights

Equally deceiving, the path doesn't go straight up the steep side but after the flattish section in the corry, climbs around the hillside towards Coire Dubh, this gives little steep sharp sections but also some flatter ones too so time for a wee rest. WIth the sun and heat today, I was a bit concerned at the amount of water I was getting through so put some snow in my hydration pack here to fill it up a bit.

Round Coire Dubh I was pleasantly surprised to see John standing a short way off the cairn, so I made a beeline for it. Unfortunately,,this wasn't THE cairn, just A cairn lol the top itself, at a hefty 1046Mtrs was a little way off. Reached this and my 70th Munro in a couple of minutes. Amazing hill, fantastic views, sun, no cloud,,and an icy wind,,it aint summer yet! 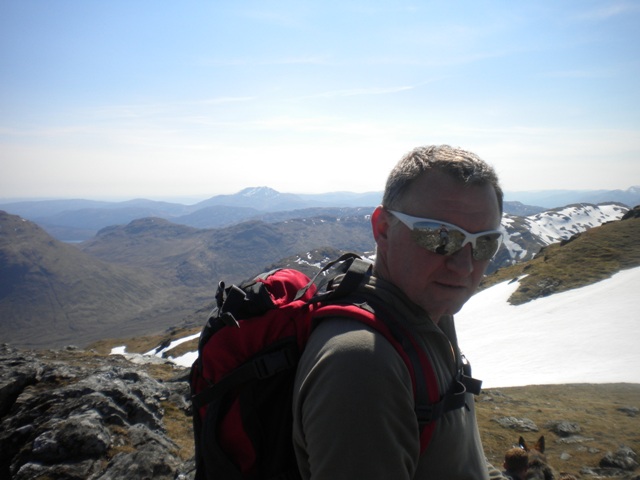 John almost at the top On top of Munro #70, Ben More and Stob Binnein behind The ridge line of our ascent

Took our pics and settled down on the north side of the top for some food,,how excited was I when I remembered the bottle of lucozade sport I'd put in,,the simple things in life eh

Fuelled up and after a very pleasant half hour break, off we went. The breeze had picked up and we had an icy few mins getting down a bit for some shelter. Our route down was to follow the path round the hill to the area above Coire Cruaiche the simply head down. The ground was pretty dry for the main part, some boggy sections and a bit of running water but otherwise good going down to the river. Heading down off the hill to the River Falloch

Reaching the river, we crossed at a section with amazing formations on the rocks, carved out by the water over many ages. A couple of hops, a potentially messy slide on green moss and we were over. Too high up for the track but some evidence of a path covering grass and a bit more bog. On down and rejoined the main track opposite the old sheep folds. There after, a lovely wander down on a sunny afternoon. 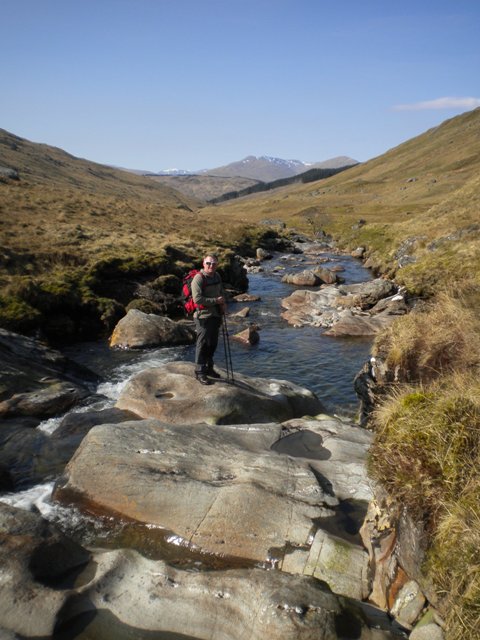 Crossing the river, very tempting to have a dip in the big pools

6 hrs, including our half hour top stop. Happy with that after our long day yesterday, Fresh summer boots and insoles all made for a very enjoyable day. Time to say cheerio to John again,,so dinner at the Rod and Reel before parting company until next weeks plan for Mullardoch.

End of another fantastic weekend.

Re: Back to claim, Cruach Ardrain - Munro Seven O!

Another nice report with some great photo's Gill

Re: Back to claim, Cruach Ardrain - Munro Seven O!

Nice walk too finish off the weekend, thanks again

Cant wait for next weekend, more of that weather plz