Left Glasgow sharpish on the Friday morning – uneventful drive up the A82 with some nice views in the early morning sunlight.

Arrived at the Attadale car park to find a camper van already parked. Turned out to be a walker from Glasgow I’d met on a previous set of hills - we remembered meeting on the hills (going in opposite directions) and that there was a large car park but neither of us could remember which hills or which car park. Another walker (from Nottingham) turned up not long afterwards. I set off first on the bike closely followed by the Nottingham walker – didn’t take long before he caught up though explaining that he cycles to work each day (that was my excuse anyway).

There’s quite a lot of ascent on the bike – coupled with a fairly loose surface necessitated getting off and pushing on a number of occasions.

Early view of the day’s hills

Met the guy from Nottingham not long after the bothy as he was securing his bike – he was planning to ascend the shoulder of Bidein a' Choire Sheasgaich. I cycled on, crossed the wee bridge and up to Loch Calavie. More uphill with some pushing again, not sure it was the best idea to cycle this bit.

Arrived at the edge of Loch Calavie, secured the bike, changed out of cycling shoes into boots and headed up to the bealach at the side of the Allt Coire Calavie.

Once at the bealach, opted to head for Lurg Mhor first

Up past a wee lochan

Some good views at the top

Still a lot of snow on the north face

After a short break, headed off back down to the bealach before the ascent to Sheasgaich with view towards Loch Monar. Met the other walker from Glasgow at this point – he was about to ascend Lurg Mhor before going to Sheasgaich.

Dropped down a wee bit from the summit to get out of the wind. Another walker appeared and stopped for a chat. Had a good long stop to take in the views and have lunch before heading back down to the bealach then down to the bike at the loch side. 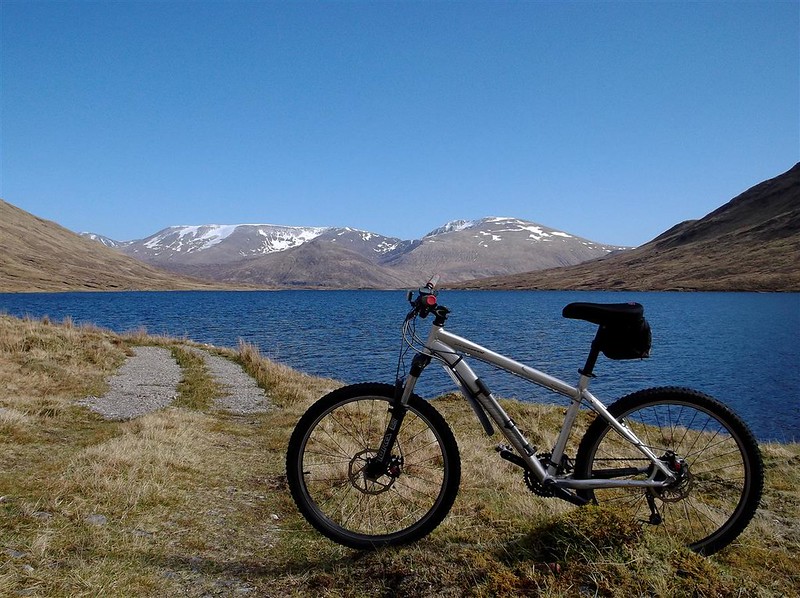 Back over the wee bridge

Then the long cycle back to the car. More ascent on the return leg – met two men walking in to the bothy followed by two lady corbetteers also heading to the bothy.

Parked at the wee car park just over the bridge from Coulags. Was just about to set off when I heard a rustling noise in the undergrowth then two small animals bolted past me and across the road. Not long after another two did the same. Don’t know what they were – maybe stoats but seemed bigger than that ?

Set off early up the track from Coulags

The bothy came into view

Peered in the window and saw someone fast asleep in a sleeping bag so decided not to go in in case I disturbed them.

Headed onwards up the track before the point when it splits and I went west. Maol Chean-Dearg comes into view

Followed the track up past Meall nan Ceapairean

Kept going until arriving at the bealach. View to An Ruadh-stac

Rockier near the top before getting to the cairn. Some good views if a bit hazy

Waited a while but the haze wasn’t going to clear. Headed back down to the bealach with view towards An Ruadh-stac

Walked round to the base looking over the lochans

A little snow near the top

Over some more snow patches to the summit cairn

Took some shelter from the wind beside the cairn and stopped for lunch. Sun was very warm and have to admit to dozing off. Must have spent nearly an hour there before eventually leaving somewhat reluctantly.

On the descent, I tried to find an alternative way down slightly to the south of the ascent route. Several times got to points where I couldn’t go on safely so eventually had to give in and go back up and over to find where I’d ascended.

Back down to the lochans

Instead of going up and over Meall nan Ceapairean I skirted round the base of it after finding a wee track from the bealach.

The track disappeared after a while but it wasn’t difficult to contour round then head east down to the bothy. Popped in and added a note in the book. Then walked back to the car. Met another walker and quite a few mountain bikers.

Got changed before the drive back to Glasgow. Stopped for some photos on the way home.

Attadale 18apr2014 activelog.gpx Open full screen  NB: Walkhighlands is not responsible for the accuracy of gpx files in users posts

Coulags 19apr2014 activelog.gpx Open full screen  NB: Walkhighlands is not responsible for the accuracy of gpx files in users posts

Fantastic photos and report. What a great two days you had! I just missed you by a day

Aren't these lochans below An Ruadh-stac just the best?

You're closing in now a bhalaich

Brilliant. Two cracking days you got.

Hey - that was a close escape - same hills (BaCS & LM), same day but from different routes in - we came in from Bealach Bhearnais and would have been on BaCS about 3ish, sorry to have missed you

Great pics! What a fab weekend

AnnieMacD wrote: I just missed you by a day

it's becoming habit forming - I seem to keep missing people by a day or two.....one day it'll work maybe

I new you would be out when I saw the forecast. Some of us sensible folk are waiting till it breaks before going out.

. That track to Bendronaig is great fun on the bike.

I've taken a look back as I barely post so it was easy to see that it was on the Sgurr Na Ciche trio that I was doing when you were putting in your epic shift that we met going in opposite directions.

Back to Lurg Mhor and it's cakey neighbour.....tough going in with the bike but the downhill cycle out made it worthwhile!

Had to forego the planned days walking as I couldn't put any weight on my foot, tendon was sprained but a trip to the hospital on Skye sorted me for some Cocodamol so that I could push through the pain barrier. Managed A'Mahaighdean and Ruadh Stac Mor on the Sunday (a 51km epic) then followed that up with Seana Bhraigh via the North ridge (well dodgy) on the Monday anoth 30km+ bike/hike effort.

Following that collective of 5 remote Munros my knee finally gave up the ghost and I was forced to return to Glasgow on the Tuesday...

Good to see you again!
Mark

Fantastic rockhopper! What a great two days you had.

Another RH cracker from the very top drawer you raise the bar evrytime you venture out .

It's a long time since I have been in these hills - so thanks for triggering my memories of some great times there - particularly those of Lurg Mhor and Sheasgaich.

Must be getting to that time of year again when Rockhopper starts putting in some big epic shifts!

A seriously fine set of photos there RH on what looks like it was a bit of a hotspot for WH activity over the weekend.