After (Yet) another early rise, it's a good big bowl of porridge befrore setting off with a car full of tents, walking boots and camping stoves and a munro worthy packed lunch. I've got an Argentinian friend with me who I know from Amsterdam and we're picking up my brother from Glasgow on the way - he is looking suitably art studenty, and he's also hungover(He's a Student), but thats half the fun in filling a car for a road trip full of people in different states of awakeness and heading for he hills. The weather still hasn't decided what it wants to do so we/I have decided that Ben Lawer is simple enough to not be dangerous if the weather gets worse.

This walk appealed to me, as it takes in 2 Munros; Ben Lawer and Ben Ghlas. It's in Perth and Kinrosshire, so there's probably an easier way to get there than the road we took - but we took the scenic route along the banks of Loch Lomond.
My Brother doesn't travel well, and the slow winding roads coupled with his hangover(He's a student) means that we have to stop at Inveruglas. I'm not complaining as the views are awesome and I get to show off my country to yet another foreign friend. The weatehr is really turning out nice. Theres great crisp veiws of the mountains allong with Ben Lomond, there's Ben Venue and another Ben 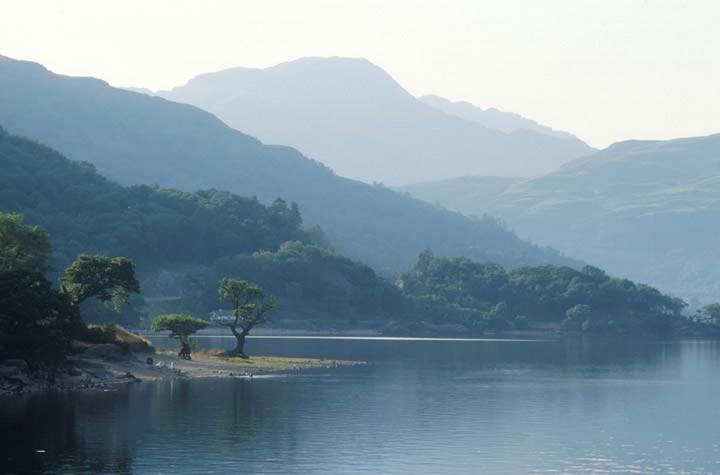 The road soon climbs a little single track road through the barren landscape that skirts the Lawer range: 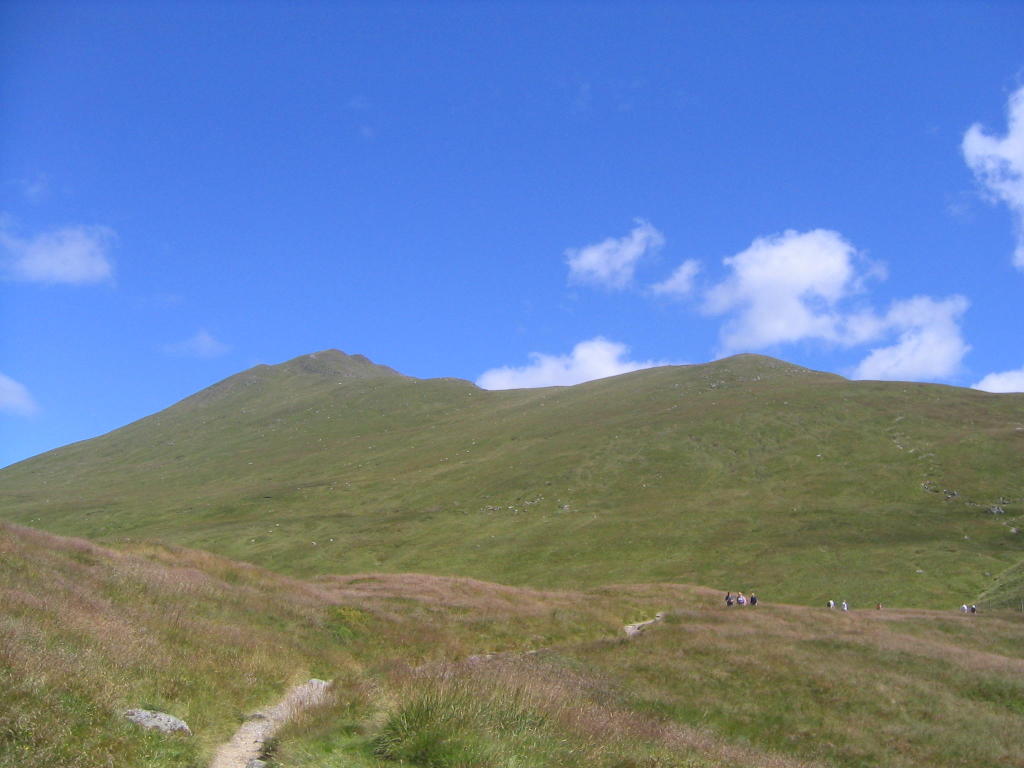 The Lawer range takes in 7 munros in full - but today we'll aim for 2.

We park at thye visitor centre and get kitted out i all the stuff we need:

I always feel like the Frog Brothers in the Lost Boys when i go through the checklist. It's great starting off when everything you're wearing has a function. My Very green brother decides that he may hinder our pace and stays at the bottom with his Sketchbook.

We set off full of Beans.(Actually bananas - but you get the drift). The area at the bottom is a national trust for Scotland nature reseve for alpine flowrs, so it's reaosnably busy. The Busy-ness continues along the initial paths to the peaks as people target various levels for the day. From the bottom you can't actually see Ben Lawer or Ben Ghlas, just reasonably interesting grassy humps. There are two paths, one which skirts round the bottom of Ben Ghlas and the one which we take which goes over the various humps and small peaks before reaching the summit of Ben Ghlas and then joining the other path at the foot of Ben Lawer.

After walking for about an hour, we reach the first false peak. It has a cairn on it so we take a photo in case this is Ben Ghlas as I have no idea how far from ben Lawer Ben Ghlas is. It seems a bit easy - but you can't be too careful with photos of your acheivments.

On the peak, we stop for some lunch, a little meditation and then use a mirror to morse code "how's the hangover" to my brother - either his hangover is bad - or he forgot his mirror and can't answer.

Recharged, we continue on up some more false peaks. The view is now getting better with every stop for breath, we can see all the way along Loch Tay... 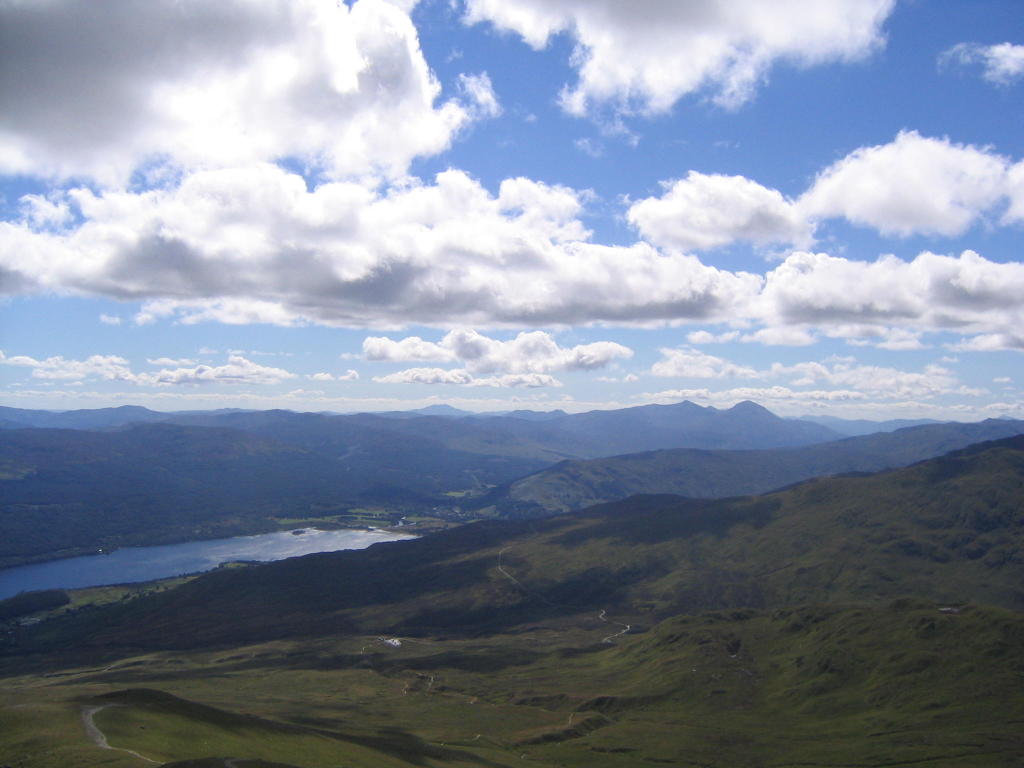 ...and out over the south. Ben Lomond is in there somewhere, but without a compass and a OS map, I couldn't tell you which one it is. I think they should have signposts.

It's now clear to us that the first cairn wasn't Ben Ghlas. We have another two peaks and saddles before we get to the summit. The saddles are a good relief after some pretty steep scrambles, and our stop for lunch seems like a distant memory. Every 20 steps or so, you turn to see the view:

I don't know what I'd do if the weather wasn't as good, as each rest includes a new energy filling view to spur you on.

Eventually we can see the cairn of Ben Ghlas, and we know our first achievement of the day is within reach. This spurs us on, as our pace quickens to acheive my second Munro.

We get to the top and theres a welcoming committee greeting and congratulating us. Scottish people's love of talking to complete strangers is great. They ask if we have a digital camera with which to send them a photo by email. Their climbing party is 4 strong - an algerian, an english woman, an english kid and a scottish woman with a very broad accent. This is quite funny. I always love subjecting my foreign friends to broad Scottish accents. My travelling and living in Europe has really taken the edge off my accent - yet people still struggle to understand me - so I like to subject them to the real thing.

The views from Ben Ghlas are better still as you can(For the first time) see Ben Lawer. It's a really magnificent looking peak, and you feel like a real climer compared to the greensih humps we've been climbing so far: 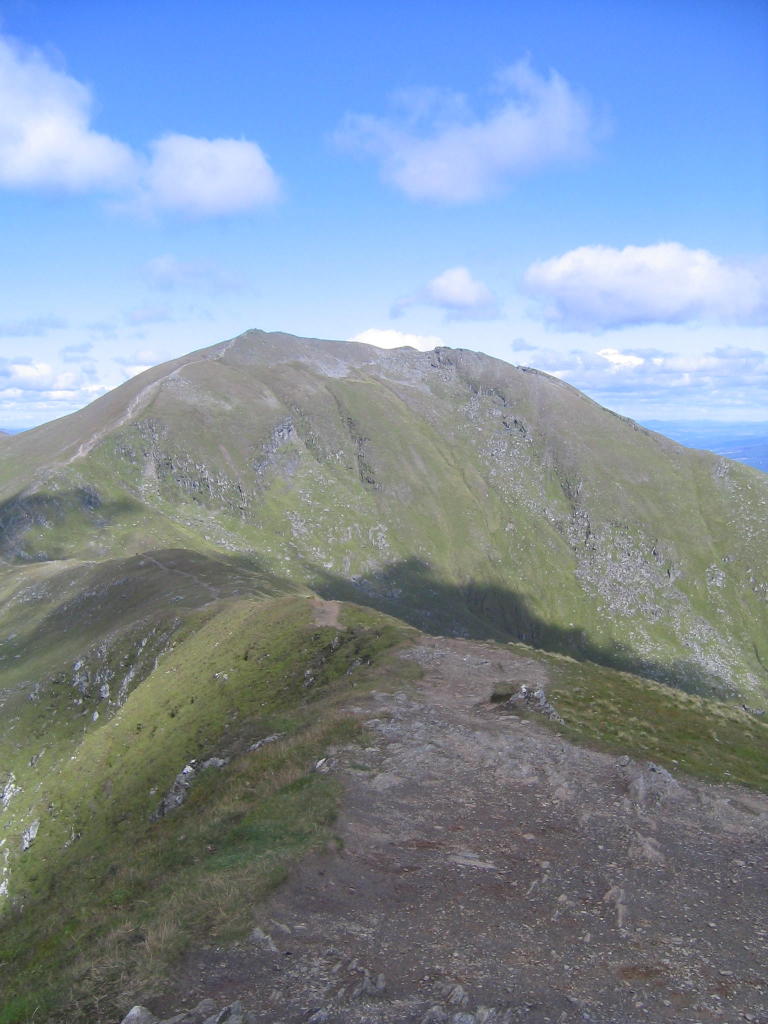 Having left our welcoming party(And possible future email buddies) to return back to sea level, we are heading down the north face of Ben Ghlas to a saddle which meets the alternative path, before a steep scramble over the rocks to the peak of Ben Lawer. We pause at the bottom for a quick snack and a chat with the sheep: 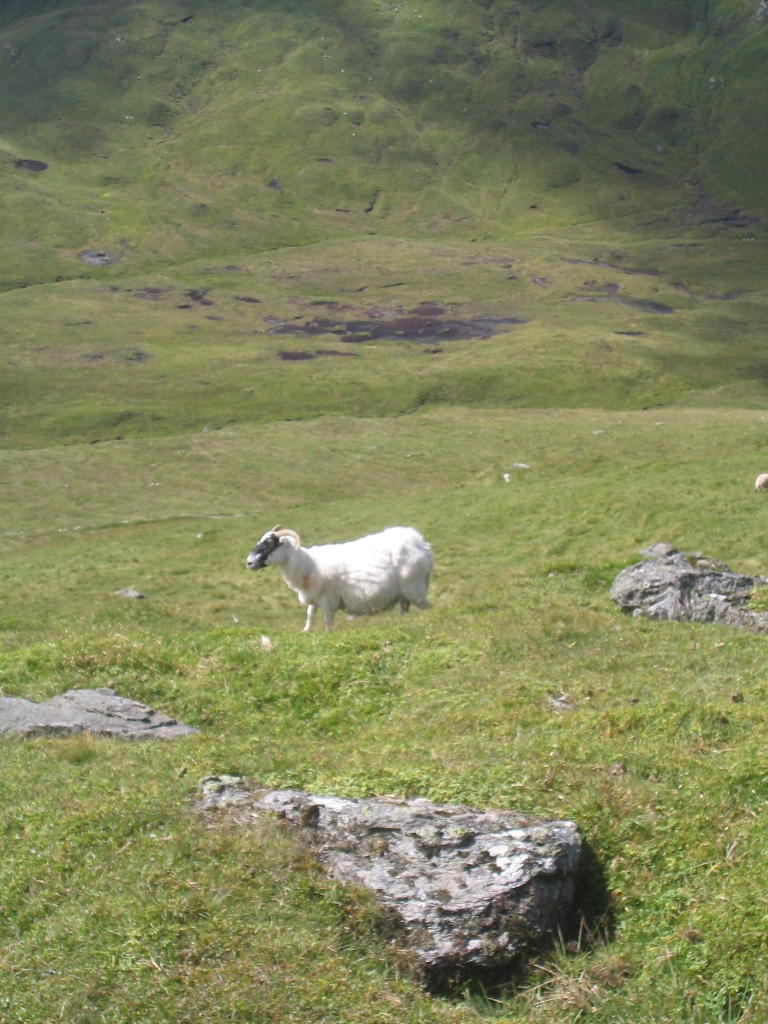 Ths climb is the first time in the walk where you start to question your energy and your abilities. Almost every large step up to the next rock in the path requires a rest afterwards. We can see people already sitting on the cairn, and we know that the views, euphoria and joy will soon be ours. Every now and then during this 30 minute climb, someone passes us on the way back down. They are full of beans and energy, and serve as a good comparison to our knackered selves: 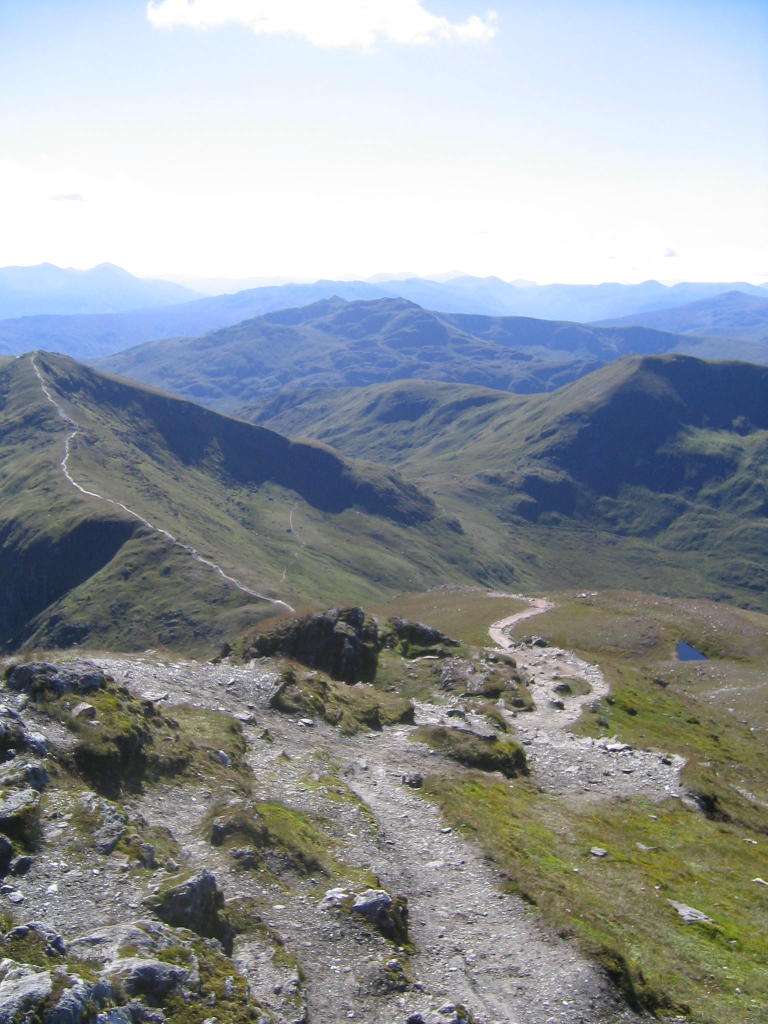 Eventually we get to the summit and are ready to collapse, but the views of Scotland surrounding us make us run around for what turns out to be almost an hour of posing for photos and admiring the view. 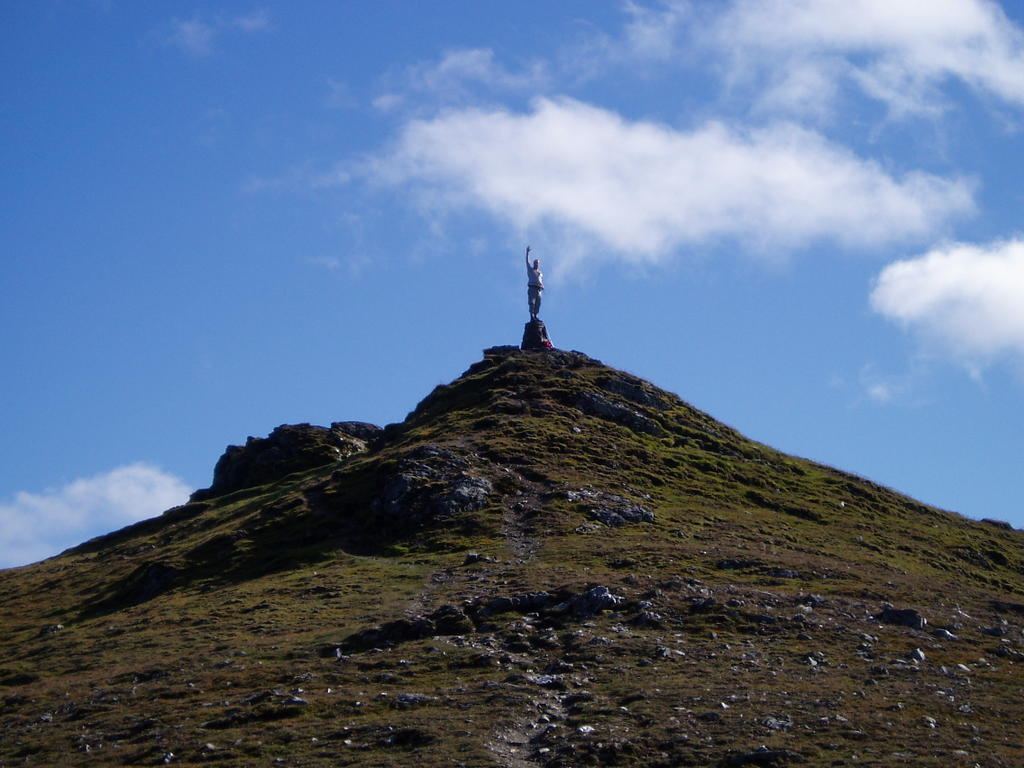 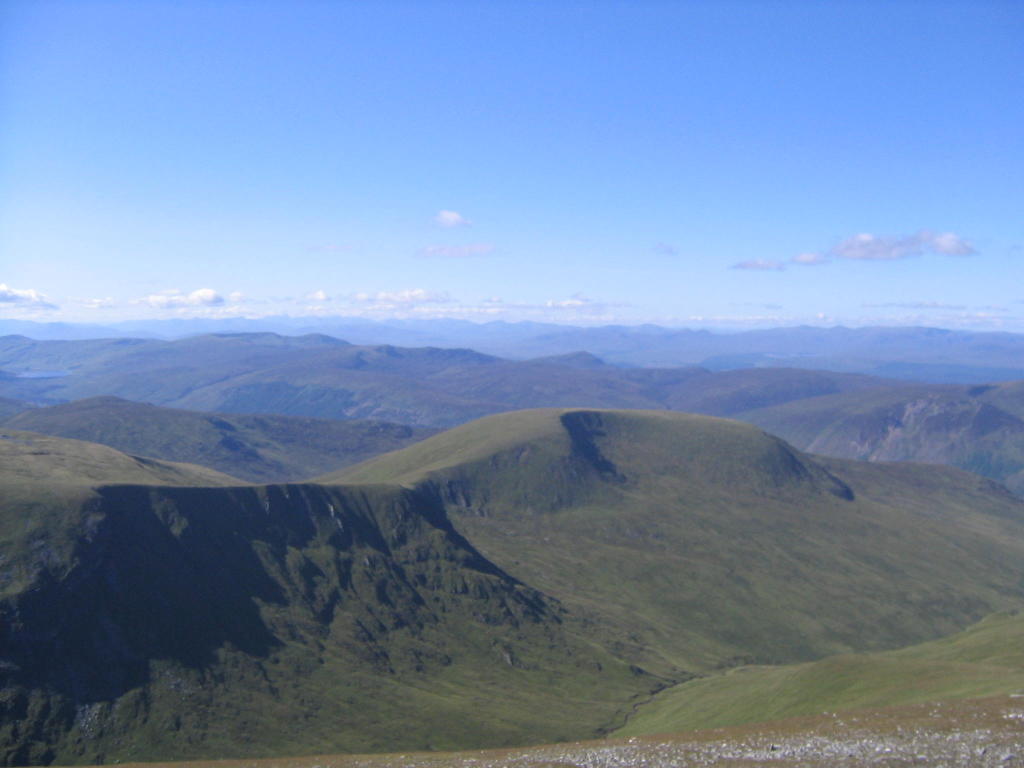 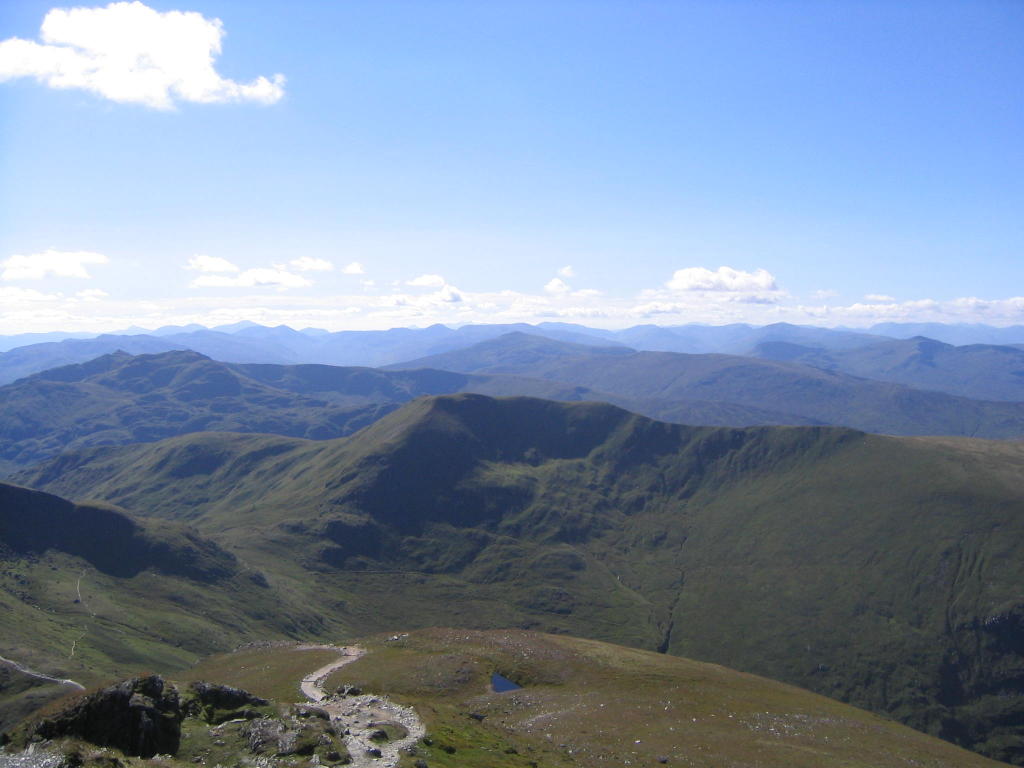 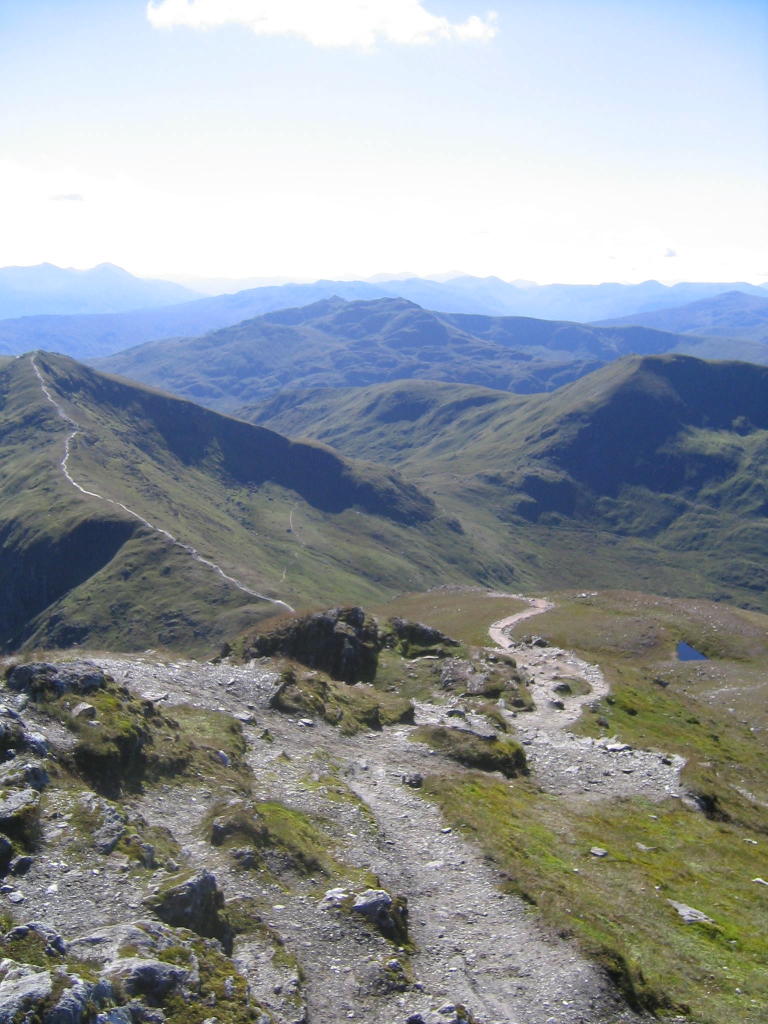 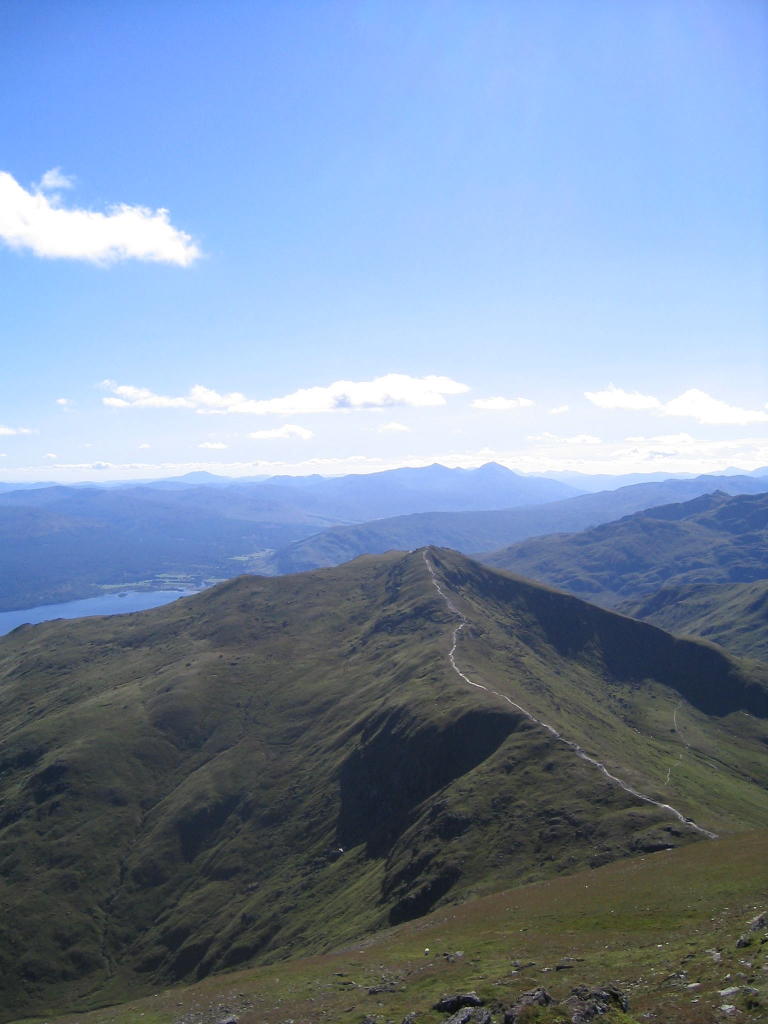 Two munros in a day, and we head down the easy path from the bottom of Ben Lawer. We are really puggled - so tired that the conversation has collapsed to a minimum as concentrate on watching our feet as we walk down the path. It sounds daft, but it's much more difficult coming down a hill, you have to concentrate on not falling and breaking your ankles, and this is the bit that really knackerers all the joints in your legs. The views also diminish as you retreat down the peak. The only advantage is that it's much quicker than going up.

Before long, we can see the visitor centre - it seems so far away.Theres far less cars, as it's now 5.30 and people are heading home for a well deserved post-munro dinner.

We get to the bottom and get another kick of pride as we regail my brother with tales of Munro Bagging. He too has a had a day of rambling around Ben Lawer and getting in touch with nature. He's been drawing the various bustle around the Visitor Centre as different climbers come and go.

After a sandwich - BIG drink of water, and a change of socks, we hit the road again to head north to Glencoe. We make a quick stop over in Tyndrum to refuel with petrol and munchies and then it's dinner round the camp fire at Glencoe to end the day.