Commitments with friends and family over the Easter weekend (plus working on Friday and Monday, boo) meant that I couldn't do anything too epic. Nevertheless, I fancied something with a reasonable amount of 'up' in preparation for a trip to Skye in May. An Stuc was still on the to-do list, and with the weather looking fabulous for the entire day the Lochan nan Cat circuit seemed like just the ticket.

Assuming that I wouldn't be the only one with this idea, I set off bright and early from Edinburgh and arrived at the Lawers Hotel smack bang on 9. Two attempts to set off later, I was on my way (why I always forget something, I'll never know). The air was still chilly and there were a few wisps and snags of cloud up high, but by the time I'd passed the farm and was on the NT land proper, the sun was out and I'd shed 2 layers. Sron Mhor and Meall Greigh between the clouds, with fellow travellers.

After a pleasant walk up along the Lawers Burn it was time to start the climb. I decided to take the route up to Sron Mhor and then across to Meall Greigh. I hit a good rhythm going up and seemed to make the summit in no time, although it was probably more than an hour in reality. Two other groups of 3 and a couple were doing the same route, so we ended up being quite a crowd on the summit After a quick sup, it was on to Meall Garbh. The group I'd set off from the previous summit with seemed determined to do it at a sprint, so they left decidedly-average-paced me in the dust. 'Ah well, it's not a race,' I decided, tortoise-like. A steep pull up from the bealach (along the wind-damaged fence posts) found me at the first summit cairn. A brief moment to check the map, and I realised that the proper summit was at the cairn on the next ridge. Time for lunch, and some more photos.

Ben Lawers and An Stuc

By this point An Stuc was looking decidedly precipitous, but the conditions were good so there didn't seem to be much to worry about. I'd brought my crampons with me, but the snow was soft enough and shallow enough that they were never needed. I tagged along with a group of Glaswegian lads for the scrambly bit up to the summit - always good to have someone to notice if you fall off. The rock and vegetation were dry enough that it never felt particularly risky, and we were all soon up and sharing some banter at the top. 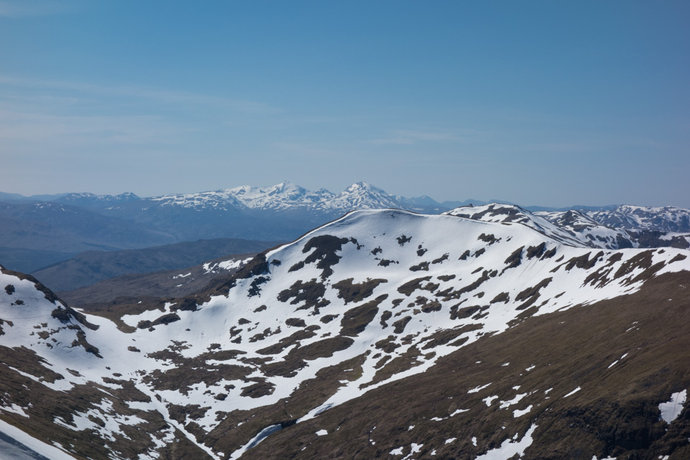 I'd done Ben Lawers before, but not since I joined WH which meant I could add it as another blue flag: that and the beautiful day sealed the deal

and off I went. The wind died down on the way down to the bealach, and it turned properly warm - I stopped in a couple of places to cool my hands off in the few snow patches left around.

The nice thing about Ben Lawers is it doesn't lull you into a false sense of security with false summits. I was glad to reach the top though!

The 3 lads were off to do Beinn Ghlas as well, but I didn't fancy the walk back along the road to the car. I decided to make my way back more directly down the ridge from the summit (avoiding the cornices which still looked treacherous) and across the moorland back to the Lawers Burn. 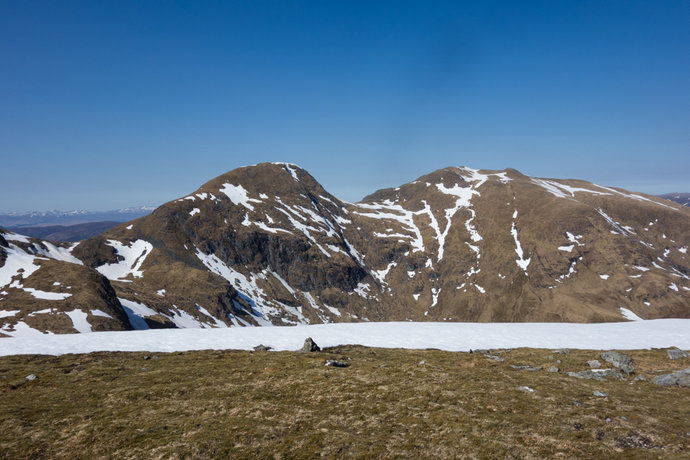 Looking back towards An Stuc from the shoulder of Ben Lawers

Having made my way down the steeper sections, I set off.

There was a squelchy part, which briefly provided some variety.

And walked some more.

By this point, I was a little bored. There's not much along this section to look at. At least it was a beautiful afternoon.

Eventually, I reached the burn and hopscotched my way across and back onto the main path. A brief halt to wash some of the sweat and sun lotion off my face to make myself a little more presentable, then back to the hotel for a well-deserved drink to pay for the car park.

Re: Gorgeous Easter Sunday on the Ben Lawers range

You picked the right day for these. They deserve to be walked when there are views.

Well done for including Ben Lawers, even though you’d already bagged it.
Loved your picture of Loch Tay towards Ben Vorlich and Stuc a’ Chroin.